COLOMBO, Sri Lanka — More than 200 people were killed and hundreds more wounded in eight bomb blasts that rocked churches and luxury hotels in or near Sri Lanka's capital on Easter Sunday — the deadliest violence the South Asian island country has seen since a bloody civil war ended a decade ago.

Defense Minister Ruwan Wijewardena described the bombings as a terrorist attack by religious extremists and said seven suspects had been arrested, though there was no immediate claim of responsibility. Wijewardena said most of the blasts were believed to have been suicide attacks.

The explosions collapsed ceilings and blew out windows, killing worshippers and hotel guests. People were seen carrying the wounded out of blood-spattered pews. Witnesses described powerful explosions, followed by scenes of smoke, blood, broken glass, alarms going off and victims screaming in terror.

"People were being dragged out," Bhanuka Harischandra of Colombo, a 24-year-old founder of a tech marketing company who was going to the city's Shangri-La Hotel for a meeting when it was bombed. "People didn't know what was going on. It was panic mode."

He added: "There was blood everywhere."

The three bombed hotels and one of the churches, St. Anthony's Shrine, are frequented by foreign tourists. Sri Lanka's Foreign Ministry said the bodies of at least 27 foreigners were recovered, and the dead included people from Britain, the U.S., India, Portugal and Turkey. China's Communist Party newspaper said two Chinese were killed.

Prime Minister Ranil Wickremesinghe said he feared the violence could trigger instability in Sri Lanka, a country of about 21 million people, and he vowed the government will "vest all necessary powers with the defense forces" to take action against those responsible for the massacre. The government imposed a nationwide curfew from 6 p.m. to 6 a.m.

The Archbishop of Colombo, Cardinal Malcolm Ranjith, called on Sri Lanka's government to "mercilessly" punish those responsible "because only animals can behave like that."

The scale of the bloodshed recalled the worst days of the nation's 26-year civil war, in which the Tamil Tigers, a rebel group from the ethnic Tamil minority, sought independence from Sri Lanka, a Buddhist-majority country. During the war, the Tigers and other rebels carried out a multitude of bombings. The Tamils are Hindu, Muslim and Christian.

Sri Lanka is about 70 percent Buddhist, with the rest of the population Muslim, Hindu or Christian. While there have been scattered incidents of anti-Christian harassment in recent years, there has been nothing on the scale of what happened Sunday.

There is also no history of violent Muslim militants in Sri Lanka. However, tensions have been running high more recently between hard-line Buddhist monks and Muslims.

Two Muslim groups in Sri Lanka condemned the church attacks, as did countries around the world, and Pope Francis expressed condolences at the end of his traditional Easter Sunday blessing in Rome.

"I want to express my loving closeness to the Christian community, targeted while they were gathered in prayer, and all the victims of such cruel violence," Francis said.

The first six blasts took place nearly simultaneously in the morning at St. Anthony's Shrine, a Catholic church in Colombo, and three hotels in the city. The two other explosions occurred after a lull of a few hours at St. Sebastian Catholic church in Negombo, a majority Catholic town north of Colombo, and at the Protestant Zion church in the eastern town of Batticaloa.

Three police officers were killed while conducting a search at a suspected safe house in Dematagoda, on the outskirts of Colombo. The occupants of the safe house apparently detonated explosives to prevent arrest, Wijewardena said.

Local TV showed damage at the Cinnamon Grand, Shangri-La and Kingsbury hotels. The Shangri-La's second-floor restaurant was gutted, with the ceiling and windows blown out. Loose wires hung and tables were overturned in the blackened space. From outside the police cordon, three bodies could be seen covered in white sheets.

Foreign tourists hurriedly took to their cellphones to text family and loved ones around the world that they were OK.

One group was on a 15-day tour of the tropical island nation, seeing such sites as huge Buddhist monuments, tea plantations, jungle eco-lodges and sandy beaches. The tour was supposed to end in Colombo, but tour operators said the group may skip the capital in light of the attacks. The tour started last week in Negombo, where one of the blasts struck.

"Having experienced the open and welcoming Sri Lanka during my last week traveling through the country, I had a sense that the country was turning the corner, and in particular those in the tourism industry were hopeful for the future," said Peter Kelson, a technology manager from Sydney.

"Apart from the tragedy of the immediate victims of the bombings, I worry that these terrible events will set the country back significantly."

Sri Lankan security forces defeated the Tamil Tiger rebels in 2009. The United Nations initially estimated the death toll from the civil war at 100,000, but a U.N. expert panel later said some 45,000 ethnic Tamils may have been killed in the last months of the fighting alone. Both sides were accused of grave human rights violations.

Sri Lanka, a small island nation at the southern tip of India, has a long history with Christianity. Christian tradition holds that St. Thomas the Apostle visited Sri Lanka and southern India in the decades after the death of Christ. The majority of the island's Christians are Roman Catholic.

The photo "Station Squabble" was picked from more than 48,000 images to claim a wildlife photography award from London's Natural History Museum.

Boyfriend of British TV presenter heartbroken by her death

LONDON (AP) — The boyfriend of Caroline Flack, the former British TV host for the controversial reality show “Love Island,” said Sunday that his “heart is broken" at her death as criticism mounted over her treatment by some British media.

BEIJING (AP) — A recent speech by Chinese President Xi Jinping that has been published by state media indicates for the first time that he was leading the response to a new virus outbreak from early on in the crisis.

MOSCOW (AP) — Two Jehovah's Witnesses have been convicted of extremism in Russia and four more arrested, one of whom reported being tortured in custody, the religious group said Friday.

Antarctica temperature reading of 64.9 degrees Fahrenheit could be record high

An Argentine research base on the northern tip of Antarctica is reporting a temperature that, if confirmed, could be a record high for the icy continent.

FRANKFURT, Germany (AP) — Daimler AG, maker of Mercedes-Benz cars, saw profit slump in 2019 and turned in a loss for the fourth quarter, underlining the pressures on the auto industry from economic headwinds and the need to invest in electric cars to meet tougher European Union limits on greenhouse gases

Cruise stranded by virus fears ends with roses in Cambodia

SIHANOUKVILLE, Cambodia (AP) — After being stranded at sea for two weeks because five ports refused to allow their cruise ship to dock, the passengers of the MS Westerdam were anything but sure their ordeal was finally over.

Syracuse couple who left cruise trade one quarantine for another

TOKYO (AP) — Americans Cheryl and Paul Molesky decided to trade one coronavirus quarantine for another. 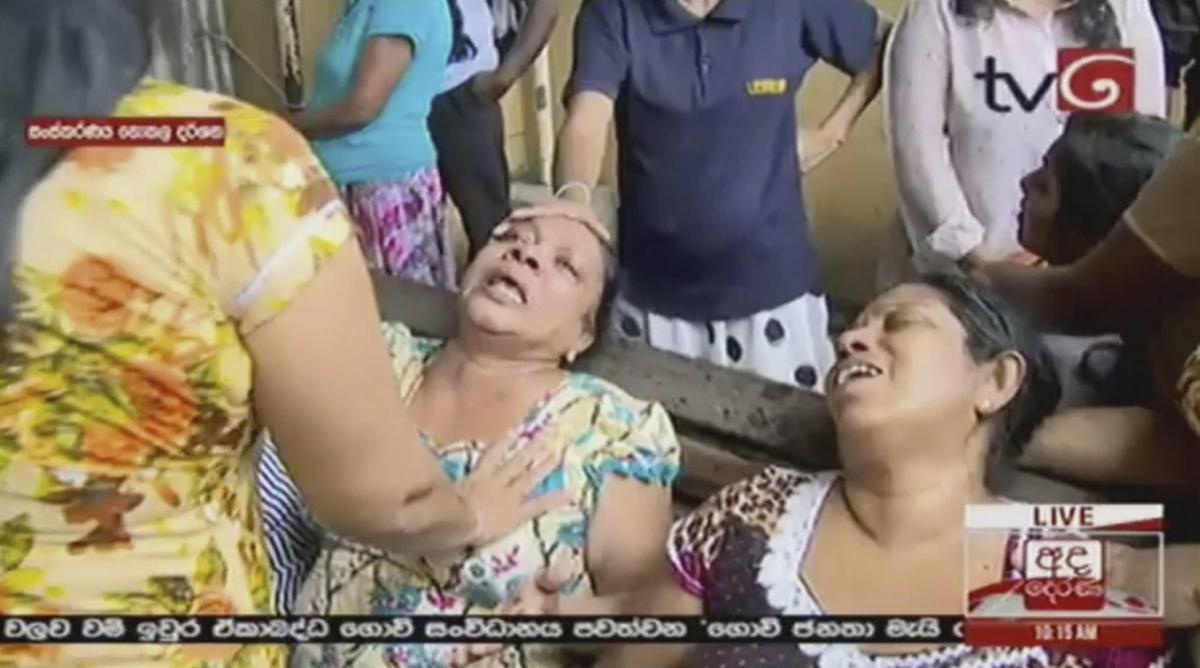 This image made from video, released by Derena TV shows women in despair after an explosion in Colombo, Sunday, April 21, 2019. Witnesses are reporting two explosions have hit two churches in Sri Lanka on Easter Sunday, causing casualties among worshippers.(Derena TV via AP) 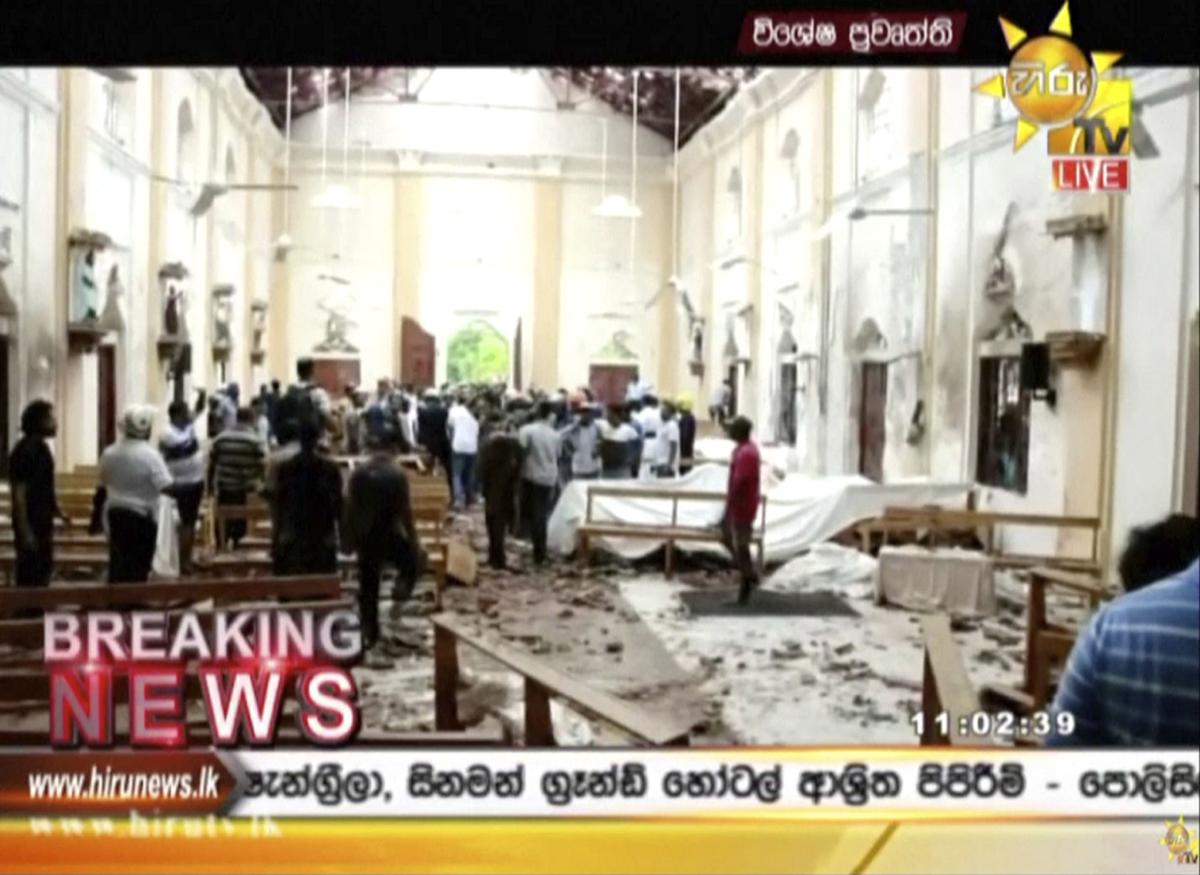 ADDS DETAIL OF THE PLACE - This image made from video provided by Hiru TV shows damage inside St. Anthony's Shrine after a blast in Colombo, Sunday, April 21, 2019. Near simultaneous blasts rocked three churches and three hotels in Sri Lanka on Easter Sunday. (Hiru TV via AP) 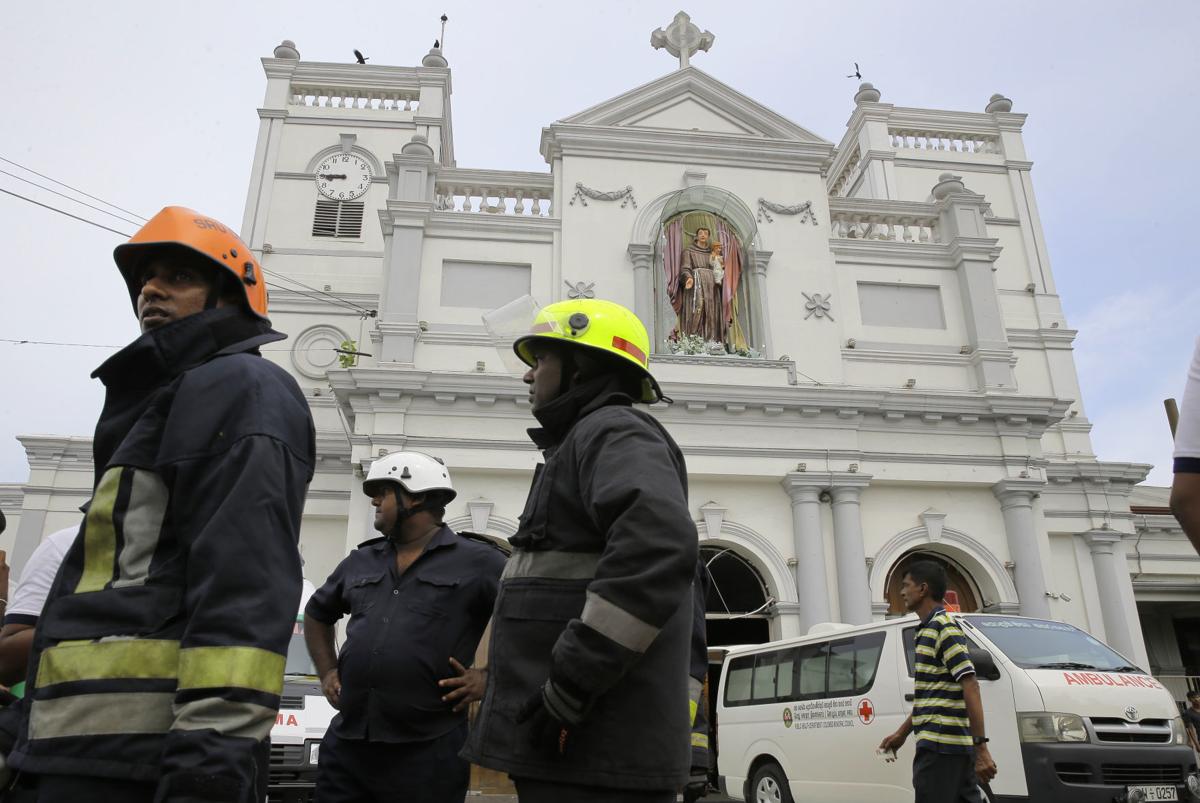 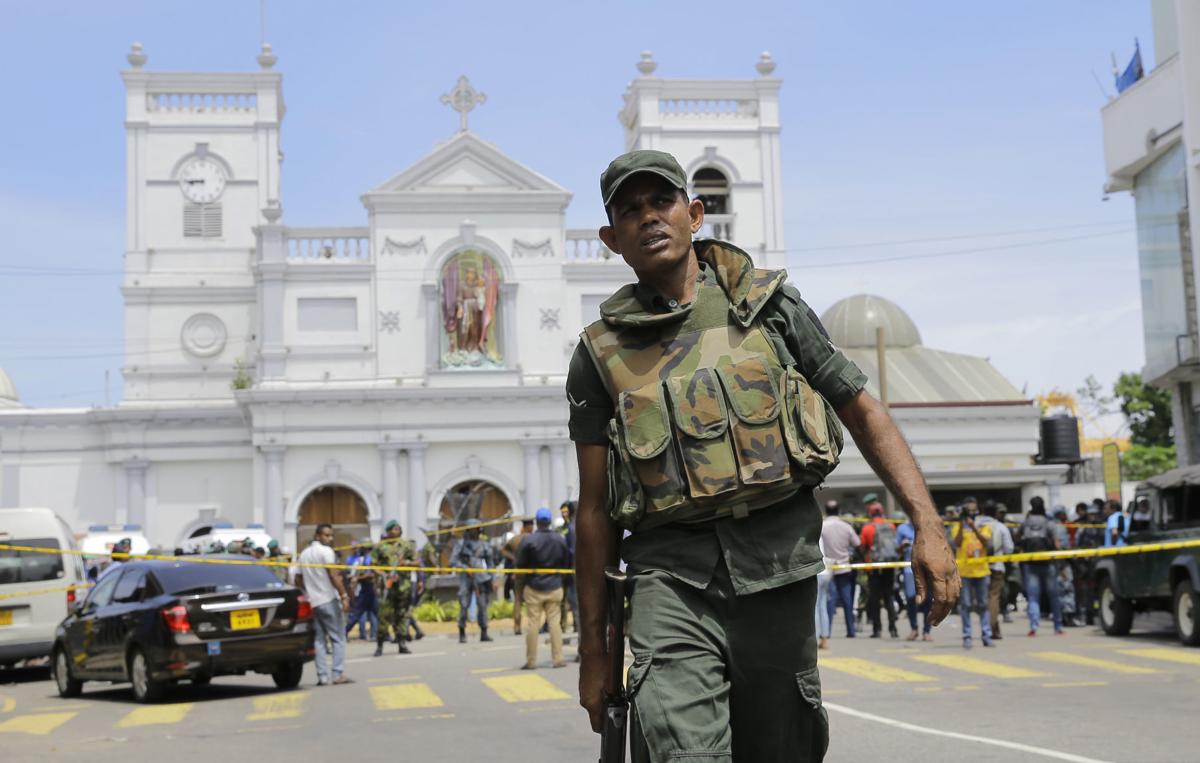 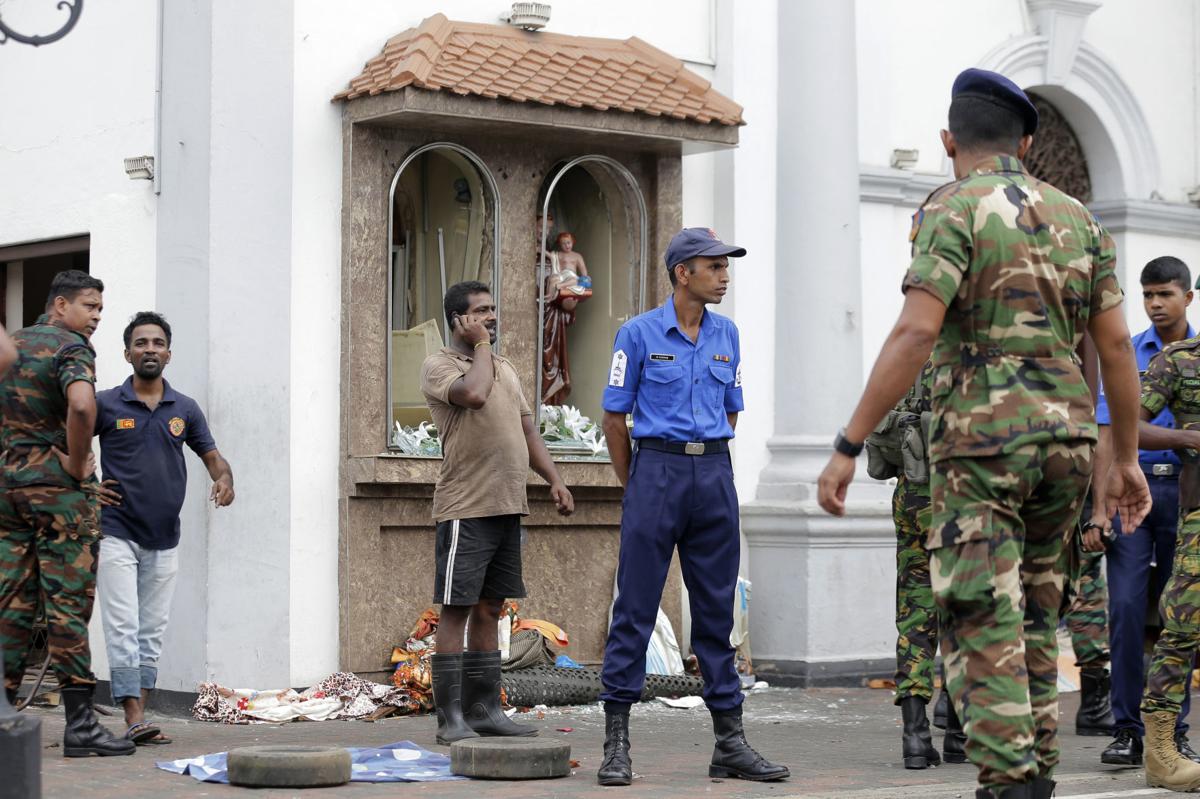