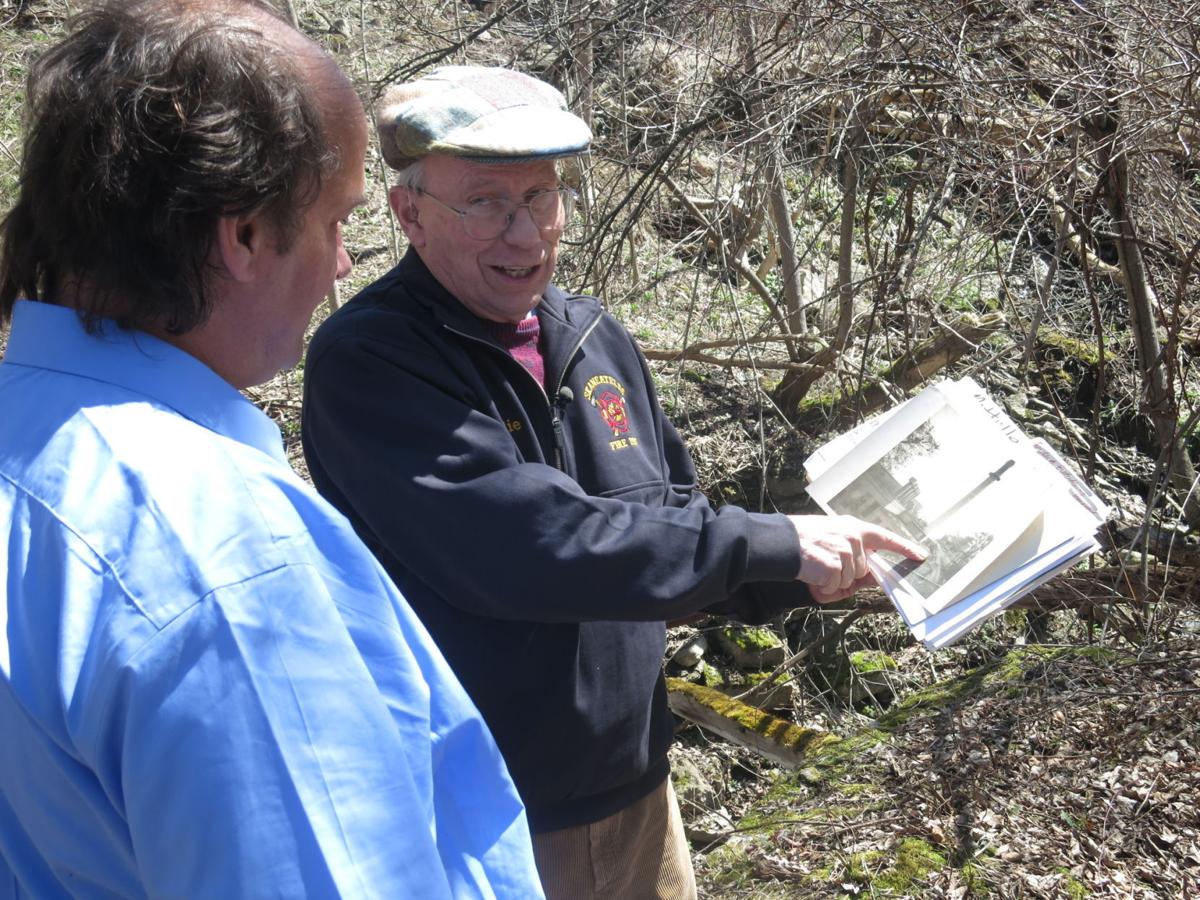 Charlie Major shows a visitor a photograph of a mill that once stood along what is now the Charlie Major Trail in Mottville during a tour of the area Saturday. 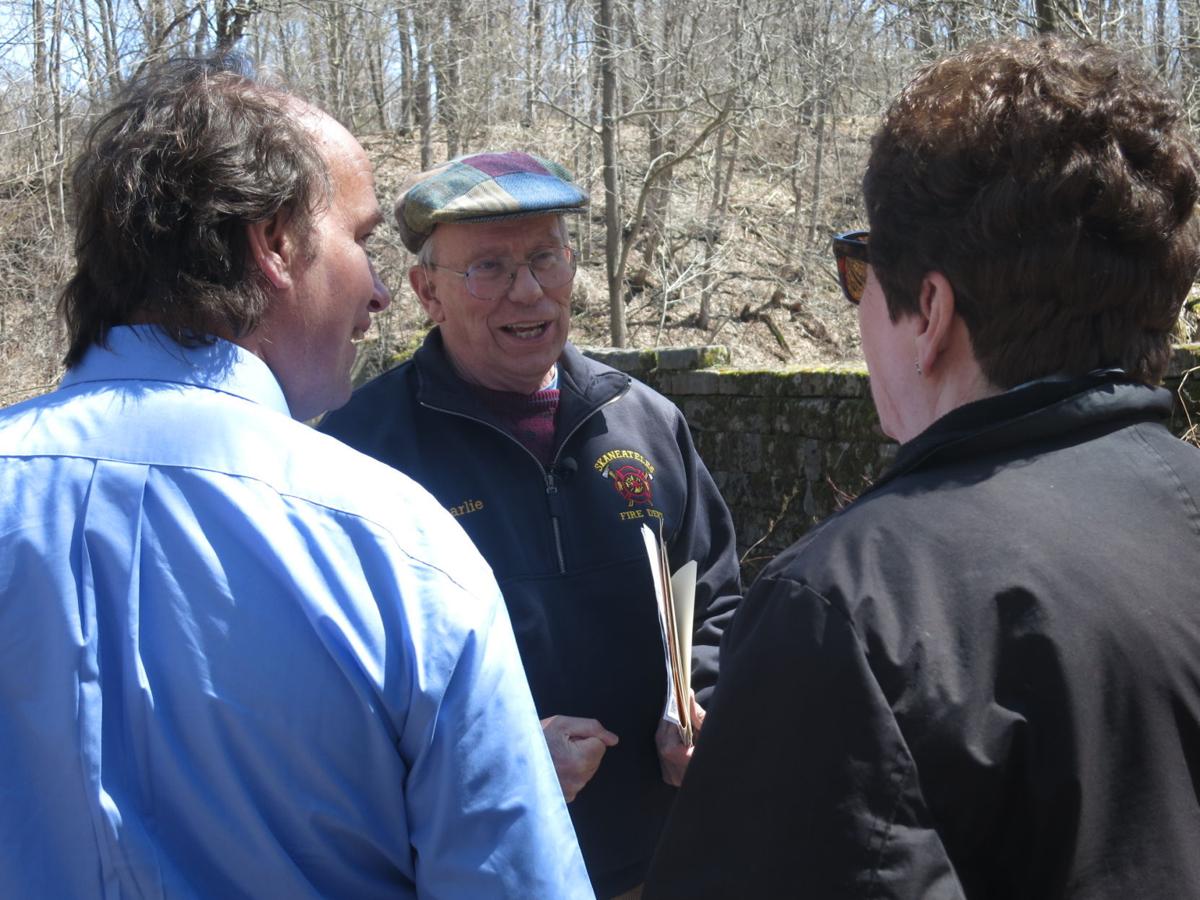 Charlie Major talks to visitors about the mills and railroad that once made up the area that is now the Charlie Major Nature Trail during a tour Saturday. 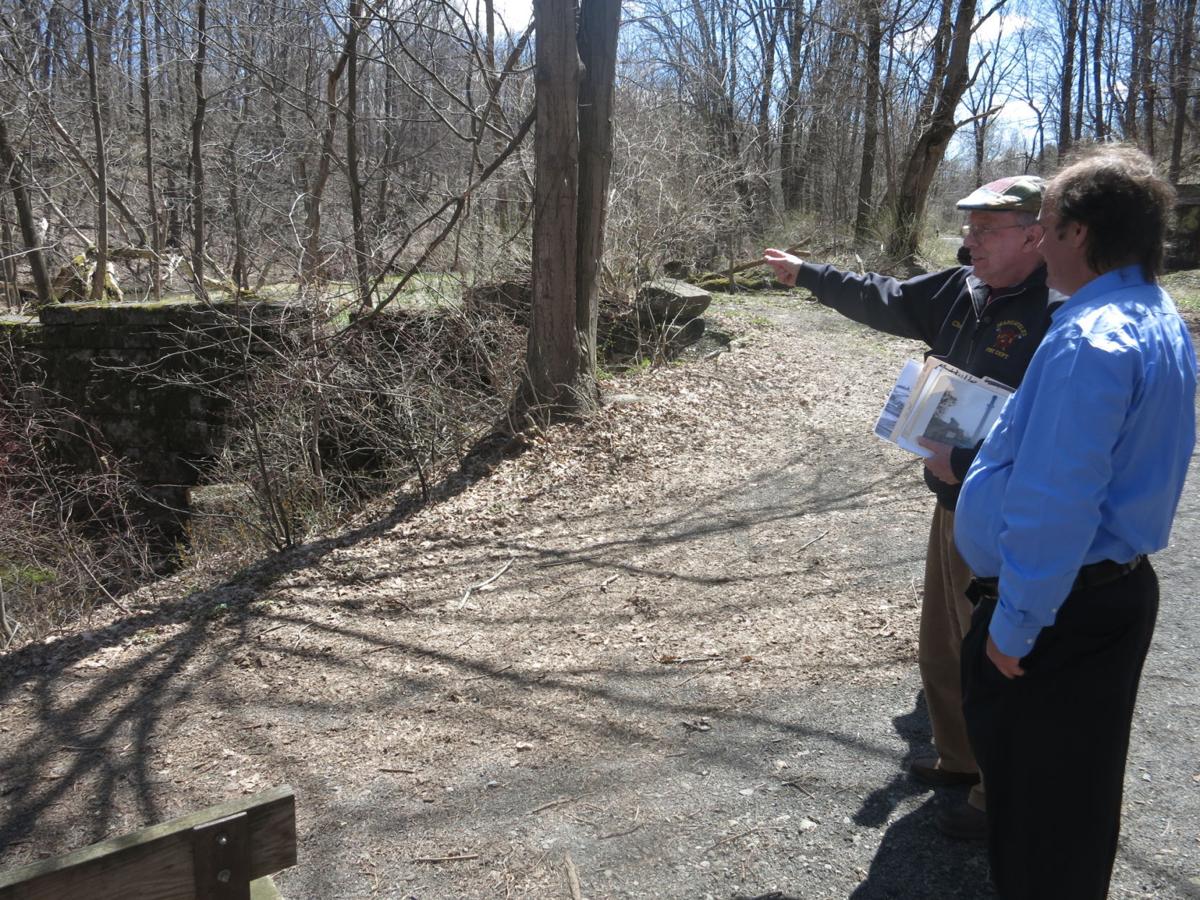 Charlie Major points out a dam over the Skaneateles Creek along the Charlie Major Nature Trail during a tour Saturday.

MOTTVILLE | The land on either side of the Charlie Major Nature Trail once played host to the booming industry that put Skaneateles on the map, and the trail itself served as a portion of the Skaneateles Short Line Railroad.

Now, all that is left are ruins of buildings that were located along Skaneateles Creek to take advantage of the vibrant water power and traces of the past visible only if one knows what to look for along the trail.

And one person who knows exactly what to look for is the trail's namesake — Charlie Major, former town supervisor, current town justice and local history.

As part of the Skaneateles Rotary Club's hosting of the District 7150 Conference over the weekend, Major gave a tour of the approximately three-quarter-mile trail and its features to a small group of Rotarians.

Before starting to walk down the trail, Major pointed out the area along Crow Hill Road on the trail's west side that first hosted "a huge woolen mill" around the time of the Civil War. The spot later contained a malt brewery, a window sash mill, cashmere shawl mill and other factories.

"They made uniforms for the Union Army," he said of the first mill. "That was their big business."

And he pointed out that the trail's crushed-stone path once comprised the railroad's five-mile route to the village of Skaneateles. It came with a bit of a distinction, he noted.

"It was the widest railroad in the world," he said, before the group realized he made a bit of a joke. "They aren't any wider. They're all the same size."

Joining the group was videographer Kevin Sio, contracted through the Skaneateles Historical Society. As Major is known for his extensive knowledge of Skaneateles history, the historical society wants to record that knowledge for its archives.

"I'm mostly interested in what he's saying, what he's talking about and what he's showing," Sio told the group before the walk began.

As the group began to walk, Major noted that the woolen mill building is still in existence today, albeit in a different form. Its stones now make up the vault and storehouse of the St. Mary's on the Lake Catholic Church cemetery.

"It's still around. It didn't disappear," Major said.

The same is true for the seawall that runs along the northern edge of Skaneateles Lake — its blocks came the stone once used to build one of the dams along the creek.

There was a grist mill along what is now the trail, and the U.S. Post Office was inside the railroad station. Another mill produced, at different times, containers, plastic tiles, cinder blocks and vacuum cleaners.

When people ask what the mills made, Major said it depends on the era.

"These mills changed so many times over the years," he said, noting there were 39 mills at one point between Skaneateles and Jordan. "They had everything here."

But one of the main commodities for the railroad, Major said, was the ice that came out of the lake for use in the days before refrigerators.

"Literally thousands and thousands of tons of ice were taken out of the lake," he said. "That was the biggest business besides the passenger service."

That passenger service, he added, allowed people to take the train to Skaneateles and then board a steamship to reach the southern end of the lake in the days before automobiles.

Along the ruins of the Lakeside Paper Co., Major pointed out where steel beams were cut away for the war effort during World War II. He also showed another walking trail that runs behind the mill — workers used that path to get to work because the nature trail wasn't there yet.

There was a restaurant and bar nearby where mill and railroad workers could stop in for some refreshment after they finished their jobs. There are also the ruins of a house whose heyday Major vividly remembers.

"It had a beautiful slate roof. There was a beautiful fireplace in there. Now it's just gone," he said, before pointing out a single railroad tie in the ground near the house. "That's all that's left of the railroad."

One of the curiosities among the ruins along the trail, Major said, is the frame for a sailboat — either a Lightning or a Comet — as there also used to be a sailboat factory at one point among the industries.

Toward the end of the tour, Major shared with the visitors a brief history of the teasel industry that was unique to Skaneateles and was one of the major factors behind the once-booming factory system.

"You can't believe there was once a great big woolen mill here," he said, looking around again at the head of the trail.

Simmons: Another reason behind the restaurant labor shortage

Here is a story that I believe needs attention. In the hospitality world, the labor pool has continued to shrink for the last 10 years. Everyo…

Charlie Major shows a visitor a photograph of a mill that once stood along what is now the Charlie Major Trail in Mottville during a tour of the area Saturday.

Charlie Major talks to visitors about the mills and railroad that once made up the area that is now the Charlie Major Nature Trail during a tour Saturday.

Charlie Major points out a dam over the Skaneateles Creek along the Charlie Major Nature Trail during a tour Saturday.