The view from outside Washington is that it's plagued by dysfunction and hyper-partisanship. But a group of Democrats and Republicans led by U.S. Rep. John Katko have agreed on a plan that aims to address many of the country's infrastructure problems.

"We can't have a 21st century economy with a 20th century infrastructure," Katko said in a phone interview.

The bipartisan coalition suggested a series of general reforms, such as Congress ensuring that adequate long-term infrastructure funding is in place, providing incentives for public-private partnerships and a "Buy America" provision that would mandate the use of U.S.-made iron and steel on federally funded projects.

Katko and his colleagues also addressed specific areas within the report. One of the more notable concepts is adjusting the federal gas tax, which hasn't increased in 25 years. The revenue from the gas tax supports the federal Highway Trust Fund, a main source of funding for infrastructure projects across the country.

The current tax is 18.4 cents per gallon of gasoline and 24.4 cents per gallon for diesel. While it may benefit consumers that the gas tax hasn't spiked over time, it has had a negative impact on the Highway Trust Fund. Over time, the federal government has needed to transfer money from the general fund to support the highway fund.

"It's not stable long term and it's not healthy to have a fund that is not a standalone fund for the trust fund," Katko said. "It was meant to be a trust fund and it's not because of its financial inequities."

Katko and the working group detailed a few proposals for addressing the Highway Trust Fund gap, including indexing the federal gas tax to the rate of inflation or the consumer price index.

The report also recommends an annual registration fee for electric vehicles. Because electric vehicles use charging stations instead of gasoline, they aren't subject to the federal gas tax.

"We have acknowledge that less and less cars today are using gasoline and they are therefore riding the highways for free," Katko said. "Is that fair? We have to look at that as well."

For inland waterways and ports, one of the group's main proposals is to ensure 100 percent of the funding for the Harbor Maintenance Trust Fund is used for its intended purpose. This would help the Port of Oswego, a major port in Katko's district, that has needed dredging over the years. These projects can be delayed due to availability of funding.

The report also recommends increasing access to grant programs that support water and wastewater infrastructure projects. The group acknowledged the need to bolster federal initiatives to combat harmful algal blooms, which have been found in Cayuga, Owasco and Skaneateles lakes within Katko's district.

The working group also suggested a long-term reauthorization of the Federal Aviation Administration, boosting the nation's energy infrastructure and increasing cyber security for the power grid and providing more access to high-speed internet in rural areas.

High-speed internet is a priority for Katko, who has rural areas throughout his four-county district.

Simpson lauded the report for not only examining ways to improve bridge and road infrastructure, but for also recommending more resources to support airports, ports and railroads.

"Effective, efficient and reliable infrastructure that is routinely maintained and enhanced is essential for any city, region or state to be competitive and drive sustained economic growth," he said.

Whether the plan will receive support in Congress is unclear. Katko had a conversation House Speaker Paul Ryan about the working group's report. He said Ryan was "very positive" about the proposals.

During the process of drafting the report, Katko said the group communicated with White House officials. President Donald Trump, who pledged on the campaign trail to unveil a $1 trillion infrastructure plan, may use his upcoming State of the Union address to push for infrastructure solutions.

With 2018 being an election year, not a lot is expected to get done. Any lofty legislative goals may have to wait. But Katko is hopeful there could be an infrastructure plan adopted this year.

What his group's plan has that others may not is bipartisan support. And that could be important as Trump and congressional leaders discuss how to proceed on infrastructure legislation.

"When you can go to the president and the leaders in the House and Senate and say we have 24 Democrats and 24 Republicans who agree at the outset on this conceptual outline of the plan that's a really good thing," Katko said. 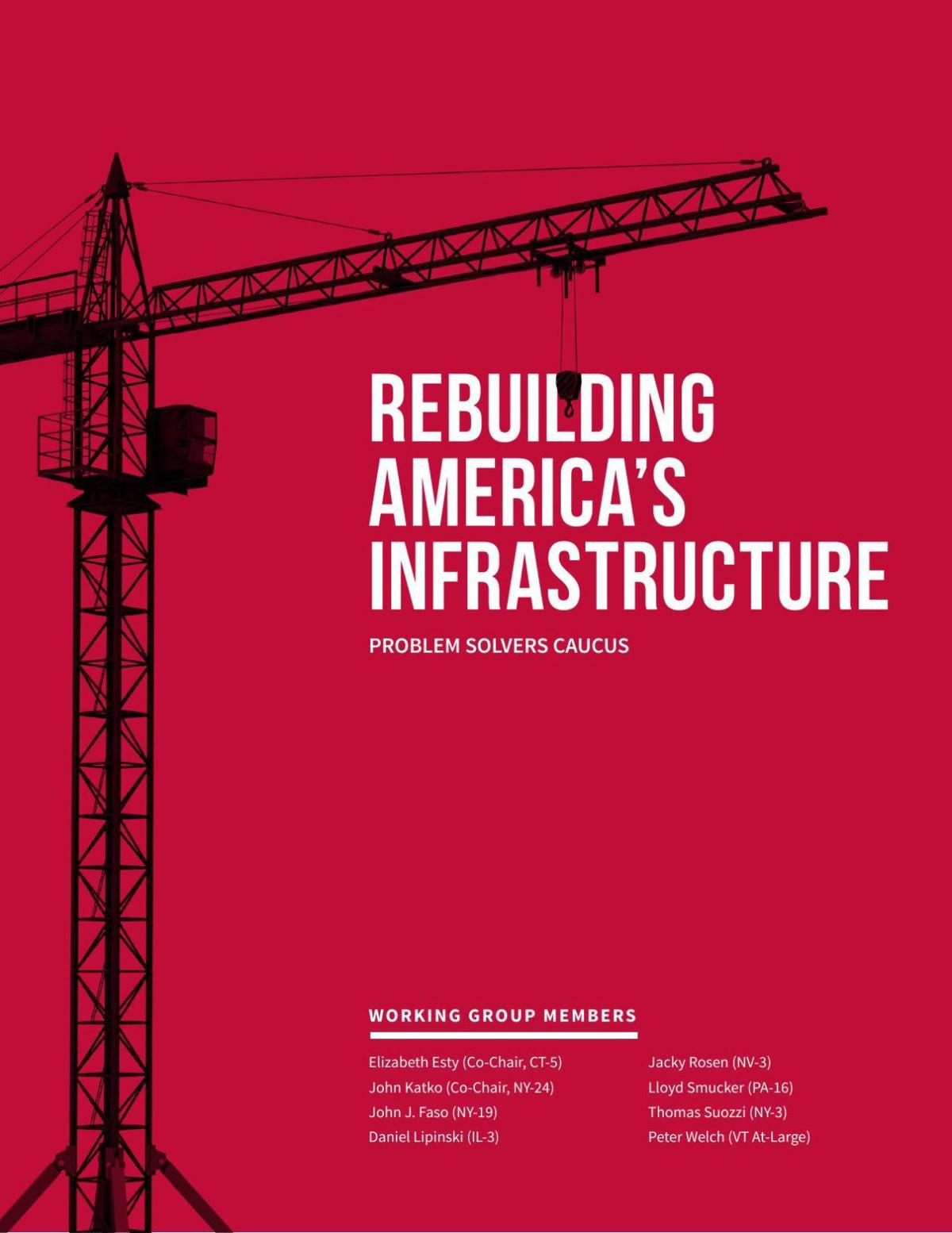