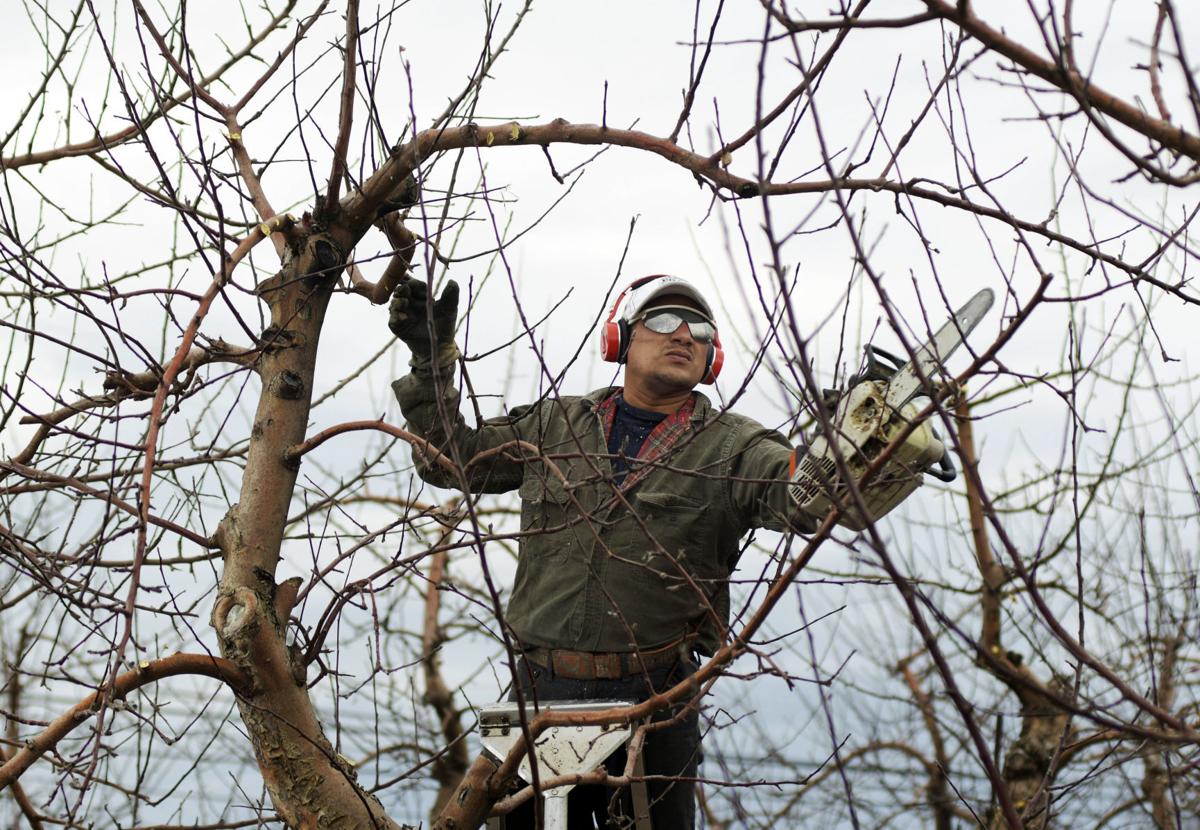 Eladio Beltran prunes apple trees at his job at an orchard March 28 in Albion. 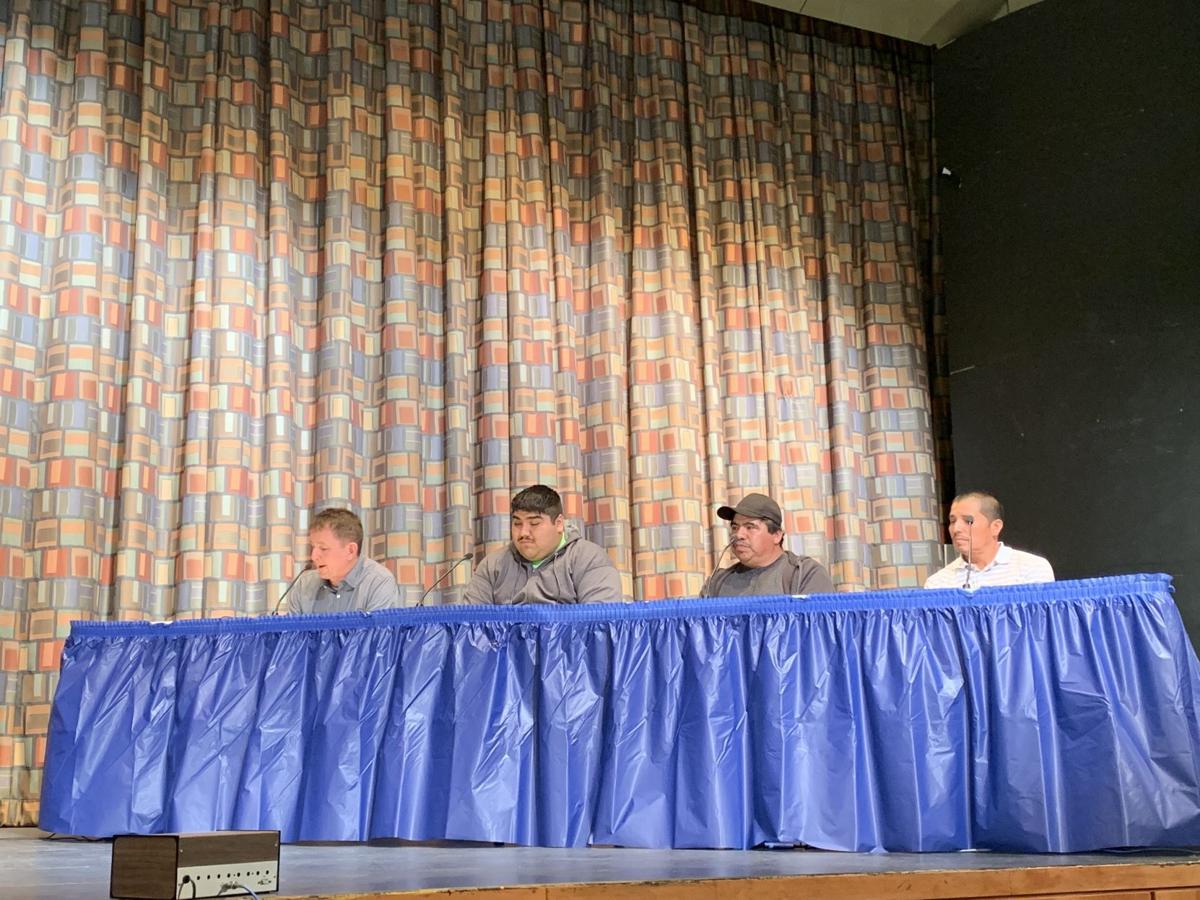 Jason Turek, left, of Turek Farms in Genoa testifies at a hearing on the Farmworkers Fair Labor Practices Act at SUNY Morrisville Thursday. Joining him, from left, are employees Leonardo Perez, Jose Perez and Mayolo Rivera. 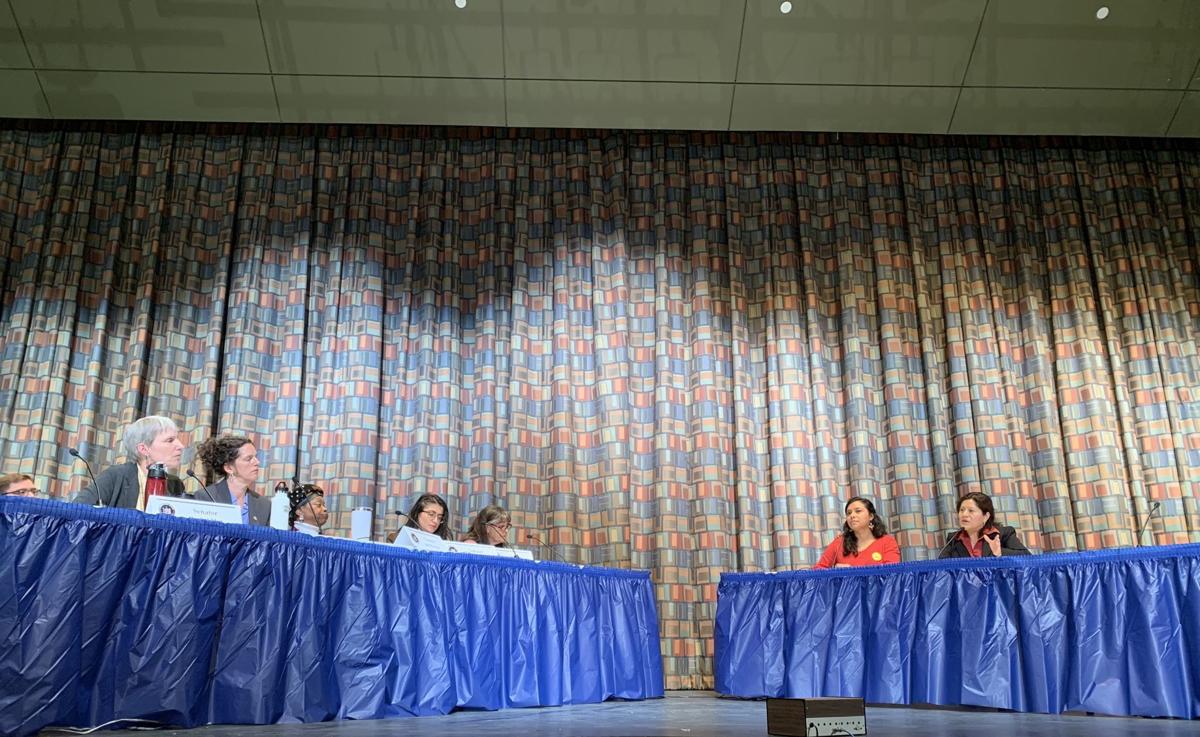 But if the Farmworkers Fair Labor Practices Act becomes law, the Critzes worry about their future. The farm labor bill would require laborers to receive overtime pay if they work more than eight hours a day or 40 hours a week.

"We can't absorb this extra cost," Matthew Critz said. "I can't pay $20 an hour to pick pumpkins and compete with Canadians."

Critz was one of more than 50 witnesses who testified Thursday at a hearing on the Farmworkers Fair Labor Practices Act. The hearing, held at SUNY Morrisville, was organized by state Sen. Jen Metzger, who chairs the Senate Agriculture Committee, and state Sen. Jessica Ramos, the bill's sponsor.

The Farmworkers Fair Labor Practices Act would extend certain rights to farm laborers, including collective bargaining, overtime pay, the right to form a union and at least one day off each work week. Farmworkers and advocates have called for reform due to mistreatment at some farms. Workers have experienced retaliation if they complain, theft of wages and poor living conditions.

Crispin Hernandez, a member of the Workers Center of Central New York and former laborer at a North Country dairy farm, shared his account of the poor treatment he received while employed at the farm. He was involved in an accident at the farm and was injured, but his employer didn't take him to the hospital for treatment.

"We want to be recognized," Hernandez said through a translator. "We are all human beings. This is why it's important."

Many of the farmers who spoke at the hearing endorsed several provisions in the Farmworkers Fair Labor Practices Act. They also highlighted the benefits offered to workers at their farms.

His concern, like Critz's, is the overtime pay mandate. If E-Z Acres is required to pay overtime, he estimated it would add at least $95,000 in labor costs each year.

"This provision has the potential to cause great harm to an already suffering farm economy," McMahon said.

Other farmers, though, believe collective bargaining could threaten their businesses.

Karin Reeves, owner of Reeves Farms in Baldwinsville, said a potential strike during the growing season "would essentially hold us hostage." She urged lawmakers to amend the bill by adding a no-strike clause that would grant farmworkers collective bargaining rights, but would prohibit work stoppages.

There were several farmworkers who testified at the hearing, most of whom joined their employers in opposing the farm labor bill. They feel the bill, especially the overtime pay provision, will adversely affect their finances because farms would avoid overtime by scheduling them for no more than 40 hours a week.

Leandro Mateos, who has worked at Torrey Farms in western New York for 30 years, said he works 70 to 80 hours a week during the harvesting season. The farm's housing is in "very good condition," he continued, and the Torreys offer a comprehensive benefits package, including health insurance, paid time off and a 401(k) plan.

While working at the farm, Mateos said he was able to pay for his son's college tuition at the University of Rochester.

"With this new law, reduced hours per week is going to hurt my family," he added.

Proponents of the bill and other farmworkers argued that the farm labor bill is necessary to address the "bad apples" in agriculture.

Gabriella Quintanilla, western New York coordinator for the Rural and Migrant Ministry, said farmworkers' paychecks have been stolen and women laborers were harassed at some farms.

Offering farmworkers the ability to collectively bargain, she continued, would allow them to join a union that protects them. But that's not the only reason she cited in her case for passing the Farmworkers Fair Labor Practices Act.

"It's about human dignity," she said.

Angela Cornell, a law professor at Cornell University and member of the faculty steering committee for the Cornell Farmworker Program, disputed claims that the bill would hurt New York agriculture. She acknowledged farmers' concerns about certain provisions, but doesn't believe it would lead workers to seek employment outside of the state.

Cornell also disagreed with a few farmers who said that the state should defer to the federal government. Some farmers believe it would preserve competitive balance if the federal government enacted a law that granted farmworkers various labor rights. These farmers worry that if the New York proposal becomes law, they won't be able to compete with out-of-state producers.

"We should not wait for the federal level to pass an immigration bill in order to provide these basic labor protections for our farmworkers in New York," she said.

The Farmworkers Fair Labor Practices Act could be considered by the end of the legislative session, which concludes in June. The state Assembly, which has been controlled by Democrats, has passed the bill before. But it hasn't received a vote in the state Senate. Until this year, Republicans held the majority in the upper chamber.

Metzger noted that there hasn't been a hearing on the bill in nearly a decade.

There are two more hearings planned. The next forum is Friday at the Suffolk County Legislature on Long Island. The final hearing will be held Thursday, May 2 at SUNY Sullivan in the Hudson Valley.

There’s a popular saying in politics these days: Elections have consequences.

Eladio Beltran prunes apple trees at his job at an orchard March 28 in Albion.

Jason Turek, left, of Turek Farms in Genoa testifies at a hearing on the Farmworkers Fair Labor Practices Act at SUNY Morrisville Thursday. Joining him, from left, are employees Leonardo Perez, Jose Perez and Mayolo Rivera.