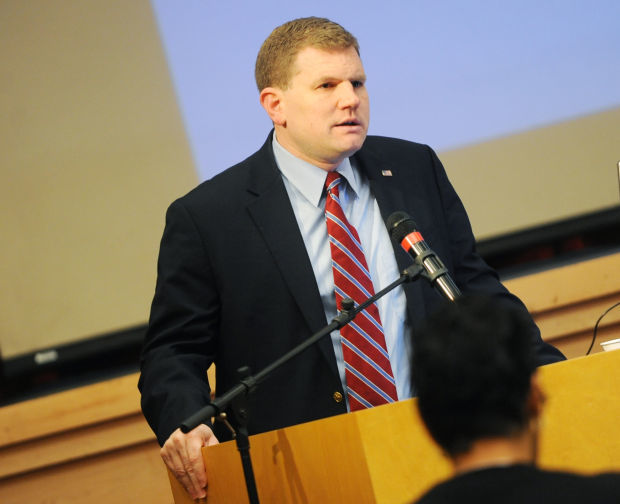 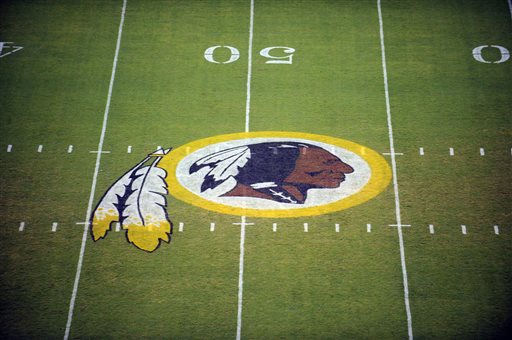 FILE - In this Aug. 28, 2009, file photo, the Washington Redskins logo is displayed at midfield before the start of a preseason NFL football game in Landover, Md. The team's nickname, which some consider a derogatory term for Native Americans, has faced a barrage of criticism. But a new Associated Press-GfK poll shows that nationally, “Redskins” still enjoys widespread support. (AP Photo/Nick Wass, File) 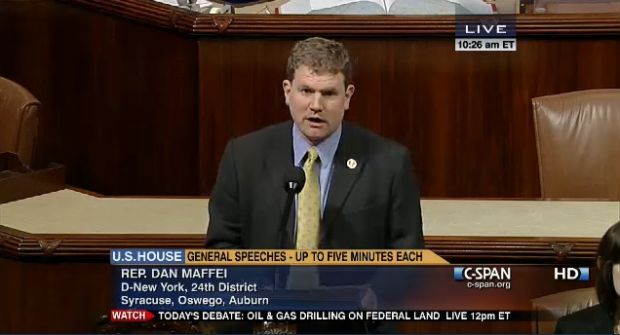 U.S. Rep. Dan Maffei didn't use the Washington NFL team's name in his House floor speech Tuesday and he doesn't think the team should be using it either.

In his speech, Maffei mentioned the ties several Native American tribes have to Central New York, including the Oneidas.

The Oneida Nation launched a campaign this year called Change the Mascot, which encourages the Washington Redskins to change their team name. The word "redskin" is a slang term Native Americans consider offensive and racist.

Maffei mentioned the backing the Oneidas' efforts have received, including the support of some members of Congress.

"The current campaign to change the team's name is supported by many groups and individuals, including Native American organizations, civic and government leaders, editorial boards and many leaders, including my colleagues Reps. Betty McCollum and Tom Cole and many others in a nonpartisan effort," he said.

Maffei also referred to President Barack Obama's comments on the team name. Obama said in an interview that if he owned the team, he would consider changing the name.

The Oneidas have met with NFL officials, but they have also requested a meeting with all NFL team owners to discuss changing the Washington Redskins' name. Maffei believes the owners, including Redskins owner Dan Snyder, should sit down with the Oneidas.

"The owner of the Washington team and other NFL owners should meet with the Oneidas as they have requested," he said. "How can we achieve mutual understanding unless they are willing to meet?"

While it's unclear if Snyder or any other owners plan to meet with the Oneidas, the Redskins' owner has said the team name won't change.

Snyder said in an interview last month that there are no plans to change the Washington Redskins' name. He wrote a letter to Redskins fans saying while he respects "the feelings of those who are offended by the team name," he hopes opponents of the name and others "try to respect what the name means, not only for all of us in the extended Washington Redskins family, but among Native Americans too."

The Washington Redskins first entered the National Football League in 1932, when the team was based in Boston. The team was initially called the Braves, but the nickname was changed to "Redskins" for the 1933 season.

When the team moved to Washington in 1937, the name didn't change. The franchise kept the Redskins nickname — a name the team has now used for 80 years.

A video of Maffei's remarks is posted below. You can also read Maffei's speech below the video.

Text of Maffei's floor speech calling on the Washington Redskins to change their team name:

Mr. Speaker, I am proud to be from Central New York, home of the six nations of the Haudenosaunee, which was also known as the Iroquois Confederacy.

It included the Mohawks, the Oneidas, the Onondagas, the Cayugas, the Senecas, and later, the Tuscarora.

It spread across New York and was one of the earliest civil governments in territory that now lies within the United States and Canada.

The name of Washington football team is derogatory to the Native Americans of this country.

For many Native Americans across the lands, the name of the Washington football team is a deeply personal reminder of a legacy of racism and generations of pain.

The current campaign to change the team’s name is supported by many groups and individuals – including Native American organizations, civic and government leaders, editorial boards, and many other leaders, including my colleagues Representatives Betty McCollum and Tom Cole, and others in a non-partisan effort.

President Obama said recently, “If I were the owner of the team and I knew that there was a name of my team — even if it had a storied history — that was offending a sizeable group of people, I’d think about changing it.”

I wholeheartedly join this effort.

I also believe the owner of the Washington team and other NFL owners should meet with the Oneidas as they have requested.

How can we achieve mutual understanding unless they are willing to meet?

Mr. Speaker, in my office I keep a replica of a belt given to me by the Onondagas, a Two Row Wampum Belt that symbolizes one of the first treaties between the Native Americans and the Europeans, signed in 1613 between the Dutch and the Haudenosaunee.

The two rows of wampum, which are beads made out of shells representing the Europeans and the Native Americans, are equal in size and travel together along a white strip of cloth representing peace.

It was, and still is, a symbol of friendship and community.

Although the years since that treaty was concluded have seen much devastation and tribulation for Native Americans, today the Haudenosaunee endure and maintain their culture.

We have much to do improve our relationship between our two peoples after centuries of strive, conflict and repression.

But so many are working to mend the rifts and restore the promise of brotherhood and respect that this Treaty Belt contains.

I joined a group of canoers last summer – Native Americans, European Americans, Asian Americans and African Americans, who rode together across Upstate New York and to New York City to commemorate this 400-year-old agreement.

Wouldn’t it be great if in order to show reverence and respect for the Haudenosaunee and the Native American tribes across this country that we continue to do these things, and wouldn’t it be great if during the 400th anniversary of this groundbreaking treaty, we could right the wrong and change this NFL team’s name?

Mr. Speaker, this treaty was perhaps the first, but it wasn’t the last. In November 1794, George Washington, whose portrait is one of only two in this hallowed hall, through his official representative Timothy Pickering concluded the Treaty of Canandaigua with the Haudenosaunee.

President Washington had a six-foot-long treaty belt fashioned to ratify this treaty that our two peoples should live in peace and friendship.

Mr. Speaker, George Washington himself respected the Native Americans of this country and their culture. Shouldn’t the NFL team that bears his name do the same?

The Oneida Nation, as part of the "Change the Mascot" campaign, unveiled a new radio ad that will air on Baltimore and Detroit radio stations …

FILE - In this Aug. 28, 2009, file photo, the Washington Redskins logo is displayed at midfield before the start of a preseason NFL football game in Landover, Md. The team's nickname, which some consider a derogatory term for Native Americans, has faced a barrage of criticism. But a new Associated Press-GfK poll shows that nationally, “Redskins” still enjoys widespread support. (AP Photo/Nick Wass, File)