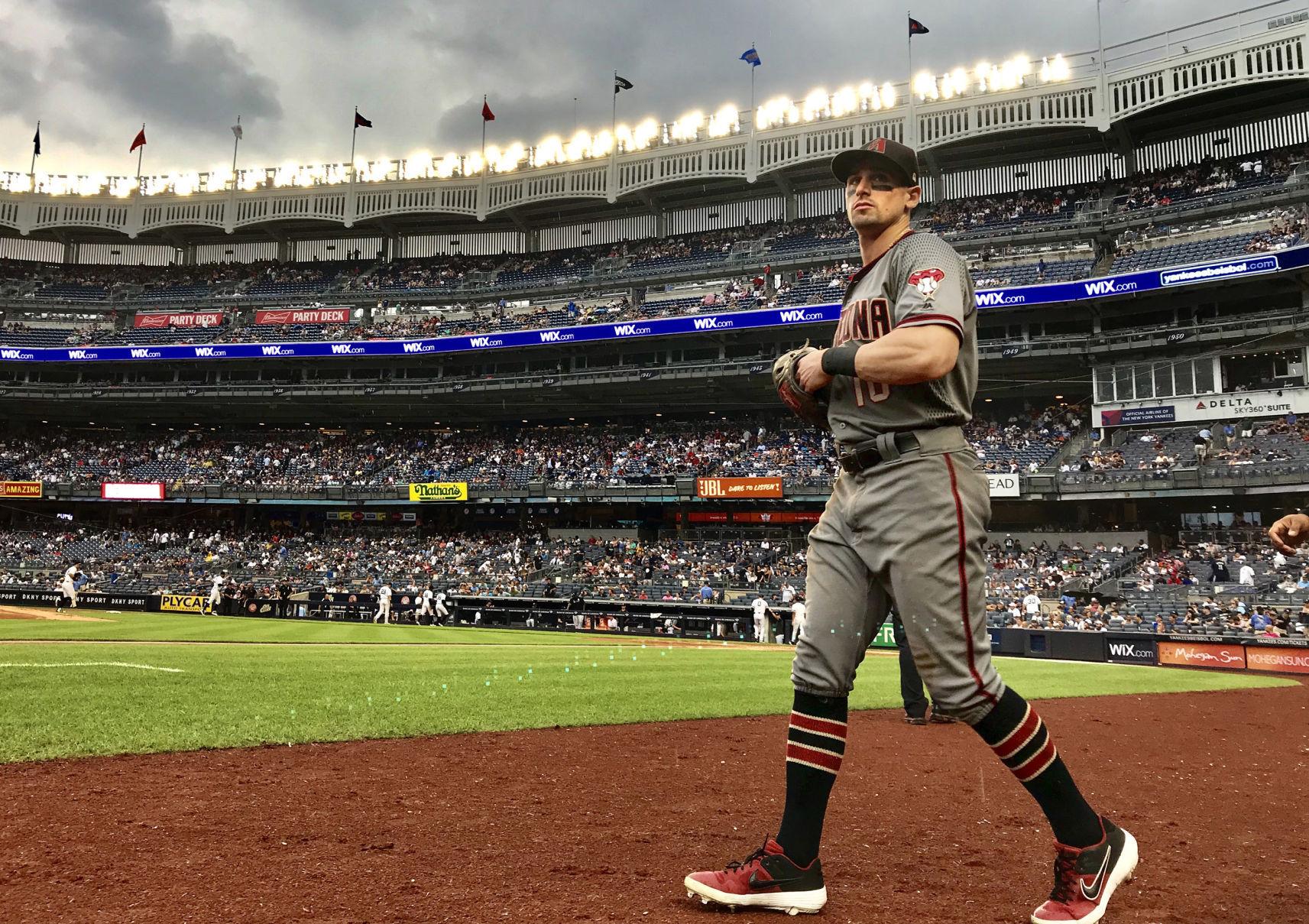 Tim's Big Day: Arizona Diamondbacks' and Auburn native Tim Locastro walks to his position in right field during the game against the New York Yankees in Yankee Stadium in the Bronx, N.Y., July 31, 2019. Locastro went to Yankee Stadium once in his life as a seven-year-old fan and now returns for the first time as a major leaguer. Locastro's day wall filled with career firsts for the young player including a solo hom run in the ninth inning.

Judge Peter E. Corning holds one of his final court sessions in December 2006. Corning, who served as Cayuga County Court judge for 27 years, died Feb. 10 at the age of 83.

Peter E. Corning, a pillar of the Cayuga County criminal justice system as the county's top prosecutor and then as a judge, died Feb. 10 at the age of 83.

Corning was a Democrat who served as Cayuga County Court judge for 27 years, winning election for the position three times. Corning stepped down from the bench at the end of 2006 when he was 70, a requirement under the state's mandatory judicial retirement law.

Before becoming a judge, the Auburn native also spent a decade as the county's district attorney, serving from 1969 to 1979. He previously worked two years as a special agent with the Federal Bureau of Investigation, and prior to that was a Cayuga County deputy sheriff. In 1976, Corning was offered an appointment by President Jimmy Carter to be a U.S. attorney, but declined the job.

In an interview with The Citizen in his final weeks as judge, Corning reflected on the importance of being an independent decision maker on the bench, and also spoke of his belief in people.

Cayuga County Court Judge Mark Fandrich, who was first elected to the bench in 2001, recalled Corning's impact on the criminal justice system in Cayuga County.

Fandrich noted that Corning devoted his entire career to public service, and said he benefited from working with Corning after first taking the bench himself.

The man who filled Corning's seat in 2007, Cayuga County Court Judge Thomas Leone, also recalled the support Corning gave to him after Leone won election to the seat in November 2006.

"He was more than helpful to me," Leone said Friday. "After I was elected, I came right up and sat alongside him. ... After I started, he was always available if I had a question."

Corning was an Auburn East High School graduate who excelled in the classroom and in athletics. He continued sports at Colgate University, where he lettered in lacrosse and football. Corning was inducted into the Auburn High School Athletic Hall of Fame in 2013.

According to his obituary submitted by Brew Funeral Home, Corning passed away at an assisted living facility in Toccoa, Georgia, the same city where his son John lives. He was predeceased by two other sons, Peter S. and David W. Corning. A memorial service will be held in the spring, the funeral home said.

Pallotta and other officials with the state teachers union took a tour of the Auburn school as a part of the Fund Our Future statewide tour, meant to draw attention "to the severe impact a lack of state funding has had on schools statewide," a union news release said.

The union is calling on a $2.1 billion state aid bump in the 2020-21 state budget, "which includes the first installment of a three-year phase-in of the more than $3.4 billion in foundation aid owed to more than 400 school districts around New York." Foundation aid is the base aid districts receive. The bus tour began for the first time in January and has included stops across the state. The tour traveled to Syracuse Friday before it got to Auburn.

A group including Amy Mahunik, principal of Seward and Auburn Enlarged City School District Jeff Pirozzolo showed Pallotta and other union officials around. As Pallotta and others asked questions, Mahunik spoke about problems the district has endured, including large class sizes — including 30 students for some classes — that make it harder to address the social and emotional needs of children.

The officials were later brought to a special education classroom that Mahunik said has two classes. She said scheduling is sometimes an issue. At one point, a teacher could be seen teaching students in a hallway. Mahunik later said the schools makes use "of every space we have."

At the end of the Seward tour, Pallotta said the visit was positive and acknowledged the school's struggles, such as class sizes. He also noted a need for social workers, physiologists and mental health specialists, adding that is "the common theme" throughout his visits in the state. He referenced the students being taught in the hallway and said these underfunding issues could be addressed through raised taxes on the rich.

"There's not much room left in this building. You could see the special needs class being held in the hall. It shouldn't be that way," he said. "There is money in this state and we believe that with a little bit of a higher tax on billionaires and ultra millionaires we can take care of these kinds of problems."

He said the union is not suggesting that taxes be raised on "somebody who just made a million dollars" or the middle class. Pallotta said there are senators and assembly members who believe "now is the time to fully fund foundation aid" and that districts across class levels in the state are having issues, which he believes is largely due to lack of foundation aid funding.

"They also say it's hard to raise taxes in an election year, but you can see by the teacher that was working with the kids in the hall it's also hard to work as a teacher when your classroom is a hallway," Pallotta said.

Later, the union officials were guests at an education roundtable at Auburn High School. For years, the district has argued that it does not receive its fair share of funding. Auburn officials have said the district spends $18,273 per pupil, well below the $24,712 statewide average. The district has also said the foundation aid formula is underfunded, based on old data and is not equally given to school districts based on need.

Elementary school social worker Casey Carey-Dixon said social workers are dealing with an array of behaviors and student needs, including homelessness and children's emotional and mental health needs. She added that her colleagues are "frequently running from one crisis to the next."

Cayuga County Treasurer Jim Orman explored a run for state Assembly, but decided not to seek the Republican nomination.

AUBURN — Cayuga County Treasurer Jim Orman thinks he can do more for the county by staying in his current position.

Orman told The Citizen Friday that after exploring a run for the 126th Assembly District seat he's decided not to seek higher office. He's informed Republican Party leaders of his decision.

"It wasn't easy, but in the end this is probably where I can do more," Orman said.

He expressed interest in the race after Assemblyman Gary Finch, who has represented Auburn and parts of Cayuga County for two decades, announced he will not seek reelection this year.

Orman talked to family, friends and other elected officials about potentially running for state Assembly. It was an appealing post to him because it would give him an opportunity to serve as a legislator in one of the largest state governments in the country.

But he also learned more about the time commitment. If elected, there would be a lot of travel — the district includes parts of Cayuga, Chenango, Cortland and Onondaga counties — and he would have to make several trips to Albany during the first half of the year when the state Legislature is in session.

The decision-making process also gave Orman time to reflect on his service as county treasurer. He was elected in 2005 and faced no opposition when he won reelection in 2009, 2013 and 2017. He said he's worked with county departments to "maintain a continuous flow of operations" and highlighted his partnerships with members of both parties.

"I think we're poised to achieve a lot this year," Orman said. "When you think about it, it's exciting."

With unfinished business as county treasurer, Orman opted to stay in the position he's held for nearly 15 years.

"While I am extremely honored to be considered for this seat, I am withdrawing my name from consideration for the Assembly seat," he said. "I am choosing to remain with our outstanding staff in the treasurer's office and continue our efforts here."

With Orman no longer exploring a run, there are four Republicans remaining in the race. David Dempsey, a former Auburn city councilor and Cayuga County legislator, is the lone Cayuga County candidate. The other three — Kenneth Bush III, Danny Fitzpatrick and Michael Plochocki — are from Onondaga County.

No Democrats have publicly announced their interest in the seat.

With Lake Ontario near the historical maximum for this time of year, three members of Congress — including U.S. Rep. John Katko — want the International Joint Commission to take action to prevent flooding.

Katko, R-Camillus, co-authored a letter with U.S. Reps. Anthony Brindisi and Joe Morelle urging the IJC to maximize outflows from the Moses-Saunders Dam near Massena.

The IJC's Lake Ontario-St. Lawrence River Board increased outflows after a temporary drop in January. This week, outflows reached 282,200 cubic feet per second.

But the members of Congress believe the IJC should do more to prevent flooding. They are asking the IJC to recommend maintaining the "highest possible outflows" from the Moses-Saunders Dam over the next several months.

"Given the current lake conditions, a strategy that maximizes outflows for the longest period possible would begin to provide Lake Ontario's riparian community with the protections they were supposed to be guaranteed under Plan 2014," Brindisi, Katko and Morelle wrote.

The U.S. Army Corps of Engineers recently released estimates for this year that Lake Ontario will reach or exceed 2019 levels.

The IJC on Thursday released a statement that acknowledged the risk for high Lake Ontario levels this spring "remains elevated." The commission said the Lake Ontario-St. Lawrence River Board "is providing advanced notice so communities can begin planning for a foreseeable Lake Ontario peak of (247.7 feet) or higher in 2020."

The board, the commission said, is deviating from Plan 2014 and maximizing outflows. The goal of the outflows is to reduce the risk of flooding.

In its statement, the commission noted that other Great Lakes are above high water levels for this time of year.

"Given the high levels across the Great Lakes basin currently, high waters are a distinct possibility again on Lake Ontario, in the Thousand Islands and along the lower St. Lawrence River in Quebec this spring," the commission added.