AUBURN — The Auburn City Council is supporting a petition to reclassify every stream within the Owasco Lake Watershed.

The council voted last week to support the Owasco Lake Watershed Management Council's effort to reclassify all of the watershed streams. Many of the streams that flow into the lake are classified under class C, indicating, "the body of water only supports fisheries and is only suitable for non-contact activities," the city council's resolution said.

The resolution said the watershed council, an intermunicipal lake protection organization, will be requesting reclassification promotions throughout the watershed to class A, meaning "a sustaining source of drinking water."

Streams and watercourses leading into the lake with A classifications, referred to as "protected streams," the resolution said, receive the stream protection provisions of the New York State Department of Environmental Conservation Protection of Waters regulations.

Before he voted for the resolution, Councilor Jimmy Giannettino asked about the approval process. Director of Municipal Utilities Seth Jensen said he understands the reclassification process would not be quick. He noted the majority of the streams in the Skaneateles Lake watershed have A classifications.

"We're trying to gather up as much local support as possible to try and really push the state (Department of Environmental Conservation) in a direction to really look at reclassifying our streams in the Owasco Lake watershed", he said. "We're not looking for anything that hasn't been done before."

Adam Effler, the watershed management council's executive director, said Thursday that the entity is planning on sending out the petition to the DEC and added that the organization is speaking with the DEC about other avenues that may expedite the process beyond the petition in order to look at all of the possible options.

Effler said he has been told that the process of DEC officials looking to determine if the streams warrant class A designations and approving those classifications can take roughly five to 10 years. If all of the Owasco streams were given class A designations, Effler said, anyone who wanted to undertake projects related to the streams would have to get a permit and follow guidelines that would reduce the likelihood of issues such as erosion or harming materials getting into the lake. While he said he doesn't have an issue with projects related to the streams, he said it's important for them to be done in ways that would not harm the watershed.

Ray Lockwood, president of the board of directors for the Cayuga County Farm Bureau, said he currently doesn't feel the reclassification is the way to go. Lockwood said he feels the permitting process is lengthy and expensive and the window of time given for a project if someone gets the permit is not very long.

"It may be more counterproductive than productive," Lockwood said. 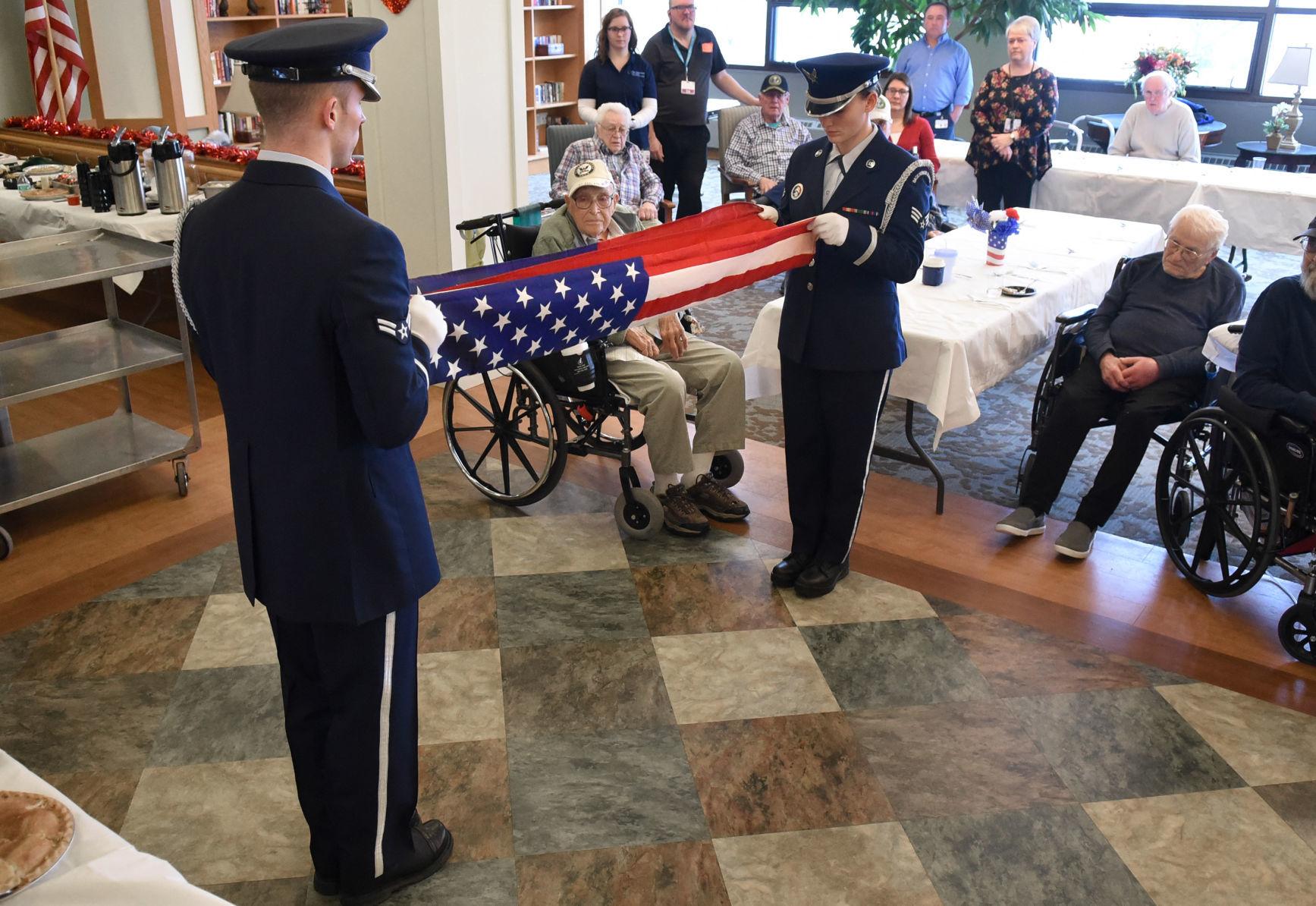 World War II Navy veteran John Walters, 93, is presented with an American flag by the 174th Air Force Honor Guard of Syracuse during a ceremony at The Commons on St. Anthony in Auburn Thursday. Walters received the flag after a veteran's luncheon as a memento of his service to the country. Walters served on a destroyer escort in the Atlantic Fleet in 1944. See a photo gallery at auburnpub.com.

The seven-person committee voted Thursday to reappoint Palermo following an executive session at the end of their February meeting. The committee also unanimously approved a resolution from Palermo to convert a paralegal position in his office to an assistant county attorney position.

Brittany Massi, the current confidential secretary, has interned with the office while in law school and filled in twice for the former secretary, Palermo said. Since Massi is already a licensed attorney, he said making her an assistant county attorney would allow her to do more legal work on behalf of the county.

"It's been a tremendous help in the office. The only disadvantage is that I can't have her signing documents or going to court because the county is not her client,” Palermo said.

"It's going to be the exact same group of people largely doing the same jobs," Palermo said. Massi would join Palermo and Chief Assistant County Attorney Richard Graham to be the third person with an attorney title in the office.

Her salary of $63,968 per year would be funded by the elimination of the paralegal position, which would result in savings of $43,640, according to a copy of the resolution in the February agenda.

"It's only the people who've been appointed assistant county attorneys that can act on behalf of the county, but she was really doing an awful lot of legal work already. So she's been a super help and I'd like to keep that going and get more if I can," Palermo said.

The committee also unanimously recommended an adjustment to the Legislature's rules of order defining the majority and minority caucuses. The resolution, which was also posed by Palermo, is intended to address that neither party within the Legislature qualified as the majority caucus during the Jan. 2 government reorganization meeting.

Currently, Legislator Keith Batman, D-Springport, is minority caucus leader for the Democrats. Palermo said, if the measure is adopted by the Legislature, Democrats would become the majority and the Republican caucus would be the minority.

Before the $20 bill is redesigned, Harriet Tubman could appear on a coin.

Two New York members of Congress, U.S. Reps. John Katko and Gregory Meeks, introduced a bill that would require the Department of Treasury to mint commemorative coins celebrating the bicentennial of Tubman's birth.

There are design requirements outlined in the bill. The front of the coin would hear Tubman's image. The coins would also include an inscription of Tubman.

"By honoring Harriet Tubman's legacy, it is my hope that these coins will help symbolize and promote the values of freedom and opportunity in today's society," he added.

If the legislation is approved and the coins are minted, they would be sold "at a price equal to the sum" of the face value of the coins, the surcharge for the coins and the cost of designing and issuing the coins.

Katko continues to push for the $20 bill redesign featuring Tubman. The change was announced in the final year of Barack Obama's presidency. But President Donald Trump's administration hasn't committed to the redesign. Treasury Secretary Steven Mnuchin said last year there's been no decision on putting Tubman on the $20 bill.

With uncertainty about the redesign, Katko reintroduced legislation that would require the Treasury to put Tubman's likeness on the $20 bill. The lead co-sponsor of the bill was the late U.S. Rep. Elijah Cummings, a Maryland Democrat.

Assemblyman Brian Kolb, who led the Republican conference for 10 years before relinquishing the post after his New Year's Eve DWI arrest, will not seek reelection this year.

Kolb, 67, announced his decision in a statement Thursday.

"It has been a tremendous privilege, both personally and professionally, to have served the people of the Finger Lakes region for the past two decades," he said. "I can say beyond a shadow of a doubt there is no higher honor than to have had the support of the men, women and families who call this area home."

Kolb won a special election in 2000 fill the vacant Assembly seat. For a portion of his tenure in the state Legislature, his district included parts of Cayuga County.

Kolb's current district, the 131st, includes all of Ontario County and part of Seneca County.

Throughout his political career, Kolb expressed interest in runs for higher office. He considered congressional bids and briefly ran for governor in the 2018 election cycle. He withdrew from the race two months later.

Kolb resigned as Assembly minority leader after being arrested for driving while intoxicated on New Year's Eve. He was replaced by Assemblyman Will Barclay, an Oswego County Republican.

Barclay said in a statement that he is disappointed that Kolb won't seek reelection.

"During his 20 years in Albany, Brian has been a trusted confidant and true friend to many of us," he said. "He will be greatly missed."

Kolb thanked his Assembly colleagues for their dedication and friendship and praised his staff for their commitment and hard work. He acknowledged the support from his family, especially his wife, Lauren, during his state legislative career.

"Twenty years ago, I came to the New York state Assembly by way of a special election and a 10-vote margin of victory," he said. "Looking back, it's clear I was fortunate on election night, and I've been equally blessed every day since."