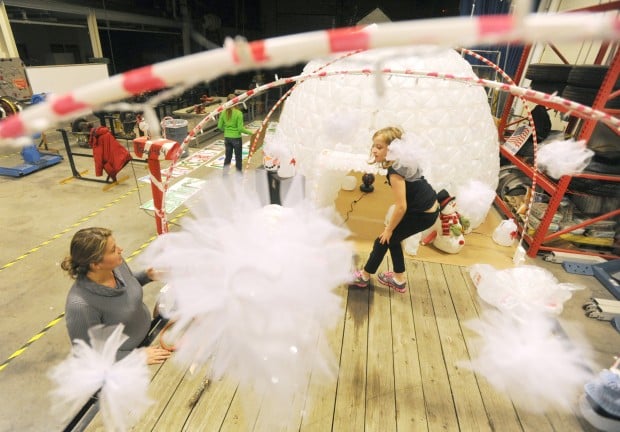 Girl Scout Troop 40464 leader Sherri Springer, left, works on a float with Madison Mitchell, 9, at Cayuga-Onondaga BOCES Tuesday evening in preparation for the annual Holiday Parade in Auburn on Saturday. 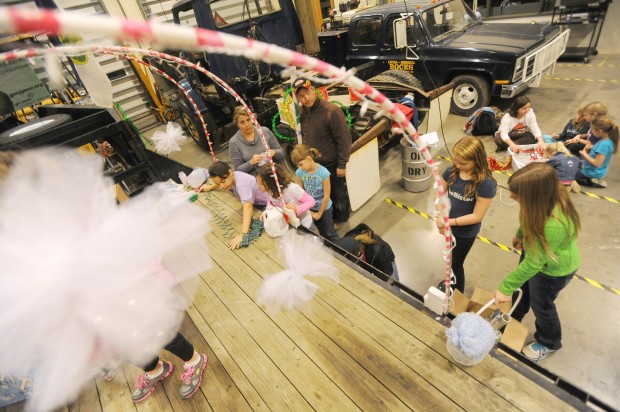 AUBURN | When Melisa Vormwald and Renee Hoye first learned they'd be spearheading the Cayuga-Onondaga BOCES float for Auburn's 26th annual Holiday Parade and Family Fun Day Saturday, they knew they would be building on hope.

As first-year leaders to a dozen Skills USA Club students participating in the activity, Vormwald and Hoye understand the reputation that they need to live up to. BOCES has taken top honors for its creative floats for the last few years.

Vormwald, a school councilor, admitted that it was a bit nerve-wracking at first, but after spending time putting their heads together they came up with an idea that, he said, offers something new.

This year's theme hearkens back to "home sweet home," Vormwald said. Their float is titled “Home for the Holidays” and features a real homey setting, she added, with someone actually coming home for the holidays.

The club spent hours working on the bulk of the float and, instead of using just that core group of students, Vormwald and Hoye opted for allowing other students with specific skill sets to do their part, too.

“Our construction class built the house peaks on the float, and the emerging commerce class made our photos for our theme, so it's been a real collaborative effort,” Hoye said. “I don't think they've had a lot of programs helping out, but we've had a lot of tech programs participate this year.”

BOCES is one of a long list of entries competing for cash prizes on Saturday. Different organizations and community groups have come together to prepare for the parade, and each entry is trying to create something different from the next.

Auburn Girl Scout Troop 40464 has designed a float that they call “a winter wonderland," troop leader Sherri Springer said. Using more than 500 recycled milk jugs, the 16-member troop built an igloo scene. The structure is aglow, surrounded by ice fishing, a fire perfect for roasting s'mores, and support for an organization that made it happen, Springer said.

“This is a very exciting adventure that we are undertaking for our first year,” she said. “And we're so proud of the girls for all their efforts. They've worked really, really hard.”

While some will compete for prizes, others are just enjoying the walk. The characters from Dickens Christmas plan to march along in the parade, giving people a taste of the famous holiday characters that line the streets in Skaneateles for the holiday season.

The Purple Lancers Drum & Bugle Corps will be marching with an honor guard for their hometown, Color Guard Capt. Joe Gagliano said. A marching group of roughly 30 will walk downtown in honor of the day's festivities, and as a way to give back to the community.

“We just want to go out and have the kids enjoy themselves for the holidays,” Gagliano said, “and also to give back to the community where we belong.”

The event will also feature free family activities before the parade, horse-drawn wagon rides, visits with Santa, free chili samples care of Daut's Restaurant and music by DJ Jane Stebbins. And anyone interested in giving back can fill Captain Jack's treasure chest by donating canned goods to the Calvary Food Pantry.

“Residents have the option of coming out early and staying out late, doing some holiday shopping or sticking around for a bite to eat,” Kline said. “It's just a great opportunity to show support and get in the holiday spirit and I encourage everyone to come out and enjoy the festivities. Bring your family, shop and stick around and have a good time.”

INFO: For a full list of activities, visit www.auburndowntown.org

Participants in the Polar Bear Plunge at this weekend's Skaneateles Winterfest will have an easier path to their frigid destination.

Ozzy Osbourne has gone public with his Parkinson's disease diagnosis. The 71-year-old musician said revealing his illness was like a weight being lifted.

Guitarist Hiroya Tsukamoto will return to Auburn Public Theater for a performance and workshop this weekend.

The 2020 installment of the WWE women's Royal Rumble match may have been the best yet.

Voting is underway for the People's Choice Awards portion of the 2020 Syracuse Area Music Awards, to be held in March.

Jim Lehrer, the legendary debate moderator and former anchor of the "NewsHour" television program, died Thursday. He was 85.

Girl Scout Troop 40464 leader Sherri Springer, left, works on a float with Madison Mitchell, 9, at Cayuga-Onondaga BOCES Tuesday evening in preparation for the annual Holiday Parade in Auburn on Saturday.