Become a Member
Read Today's E-edition
Share This
'God of War' (PS4) review: Sins of the Allfather
0 Comments
Share this
1 of 5 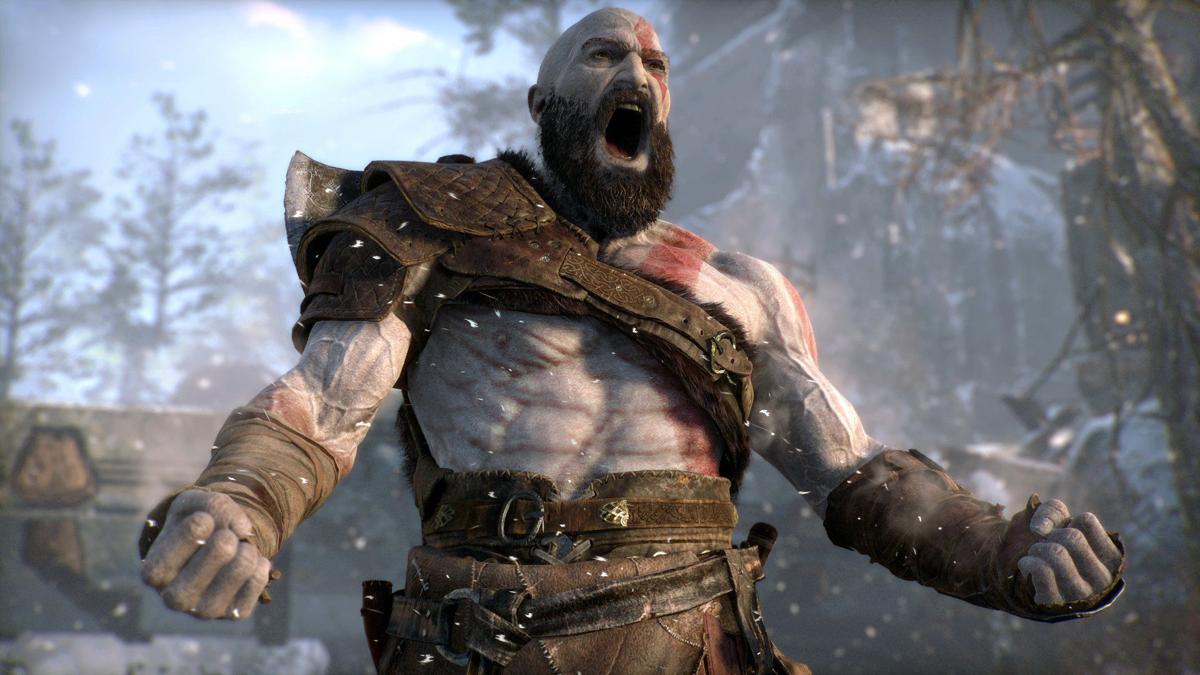 Kratos rages out in "God of War." 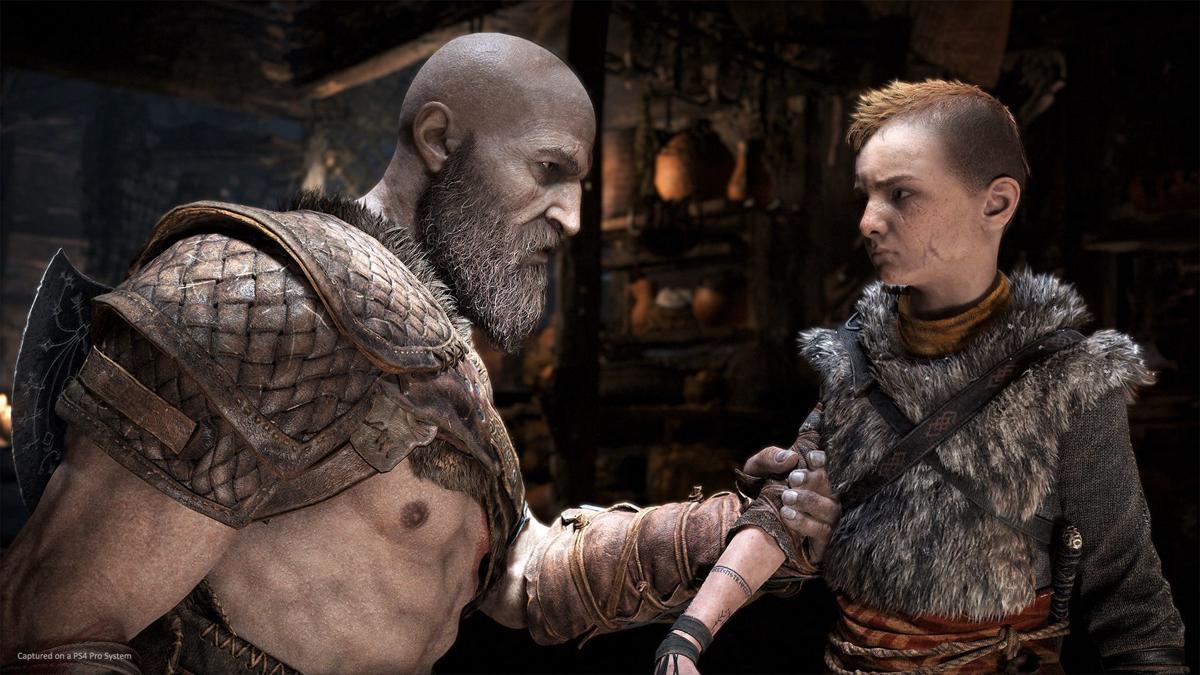 Kratos' son, Atreus, is one of several introductions in Sony's "God of War." 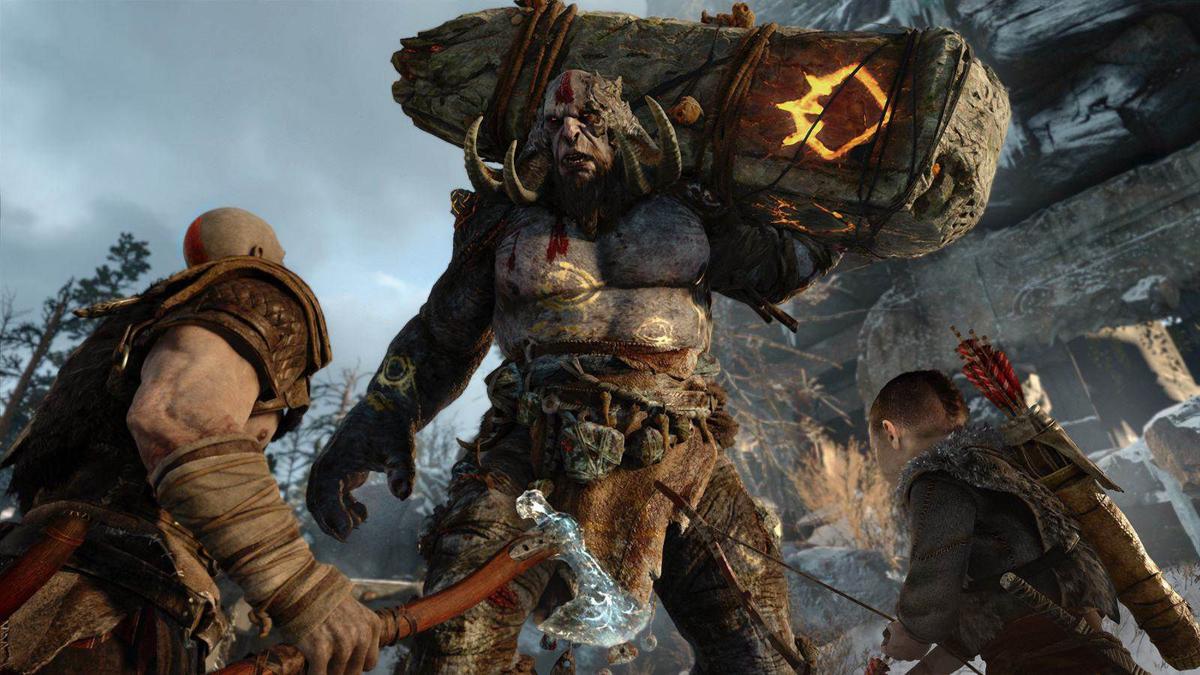 Kratos and Atreus face off with a troll in "God of War." 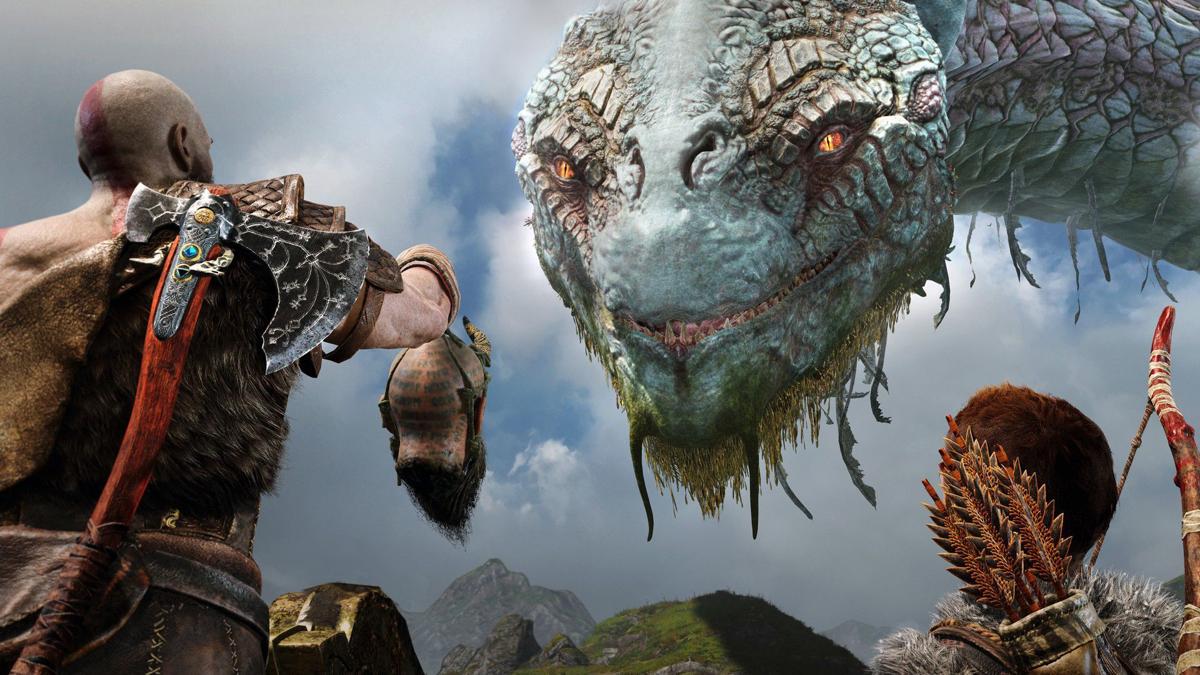 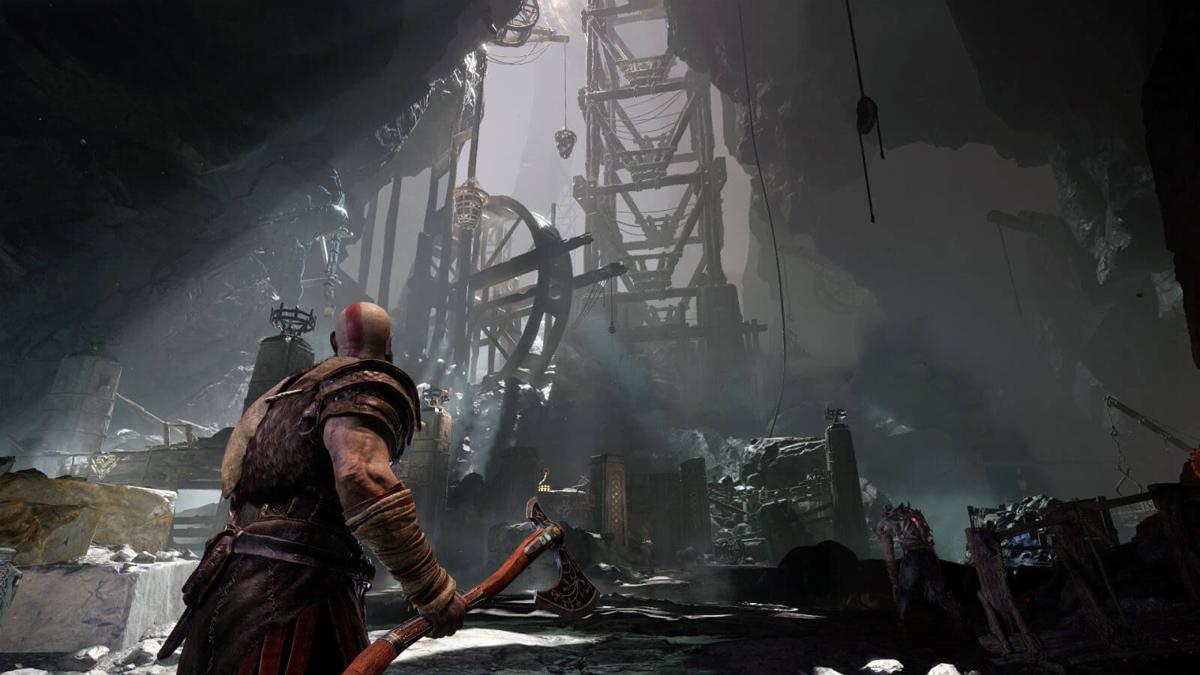 Kratos and Atreus journey to the top of a mountain in "God of War."

The new Norse setting of the first PlayStation 4 game in Sony Interactive Entertainment's action series would have been ideal for introducing a new protagonist. Kratos, the extremely 2000s guy of the series's first seven games, could have been left behind with the Greek gods he massacred in them. And someone else could have taken up his vengeful mantle against their Aesir counterparts.

But Kratos is back. And that's what makes "God of War" all the more impressive. The new directions the game does take, meanwhile, make it all the better.

Sony's Santa Monica Studio not only pits the Ghost of Sparta against a new pantheon of gods, it carefully retools both him and the combat that made him an action game icon. It bridges the old Kratos with the new, the angry buzzsaw with the bearded exile, in service of both its story and the encounters it brings. "God of War" both belongs to the series and earns its clean slate of a name.

But by chaining itself to Kratos, the game also inherits his baggage. The cartoonish sadism and crass sexuality of his rampage through Greece are gone, sure, but "God of War" continues to go out of its way to bathe his mountainous shoulders in blood. Santa Monica may write his propensity for violence into this next chapter of his life with an absolving hand, his motive no longer revenge but protection, sometimes even mercy. But the studio can't avoid leaving you disgusted with the protagonist at least once. And that one time, coincidentally, is the game's dramatic climax.

Or maybe it's not a coincidence. The major new direction taken by "God of War" is giving Kratos a son, Atreus, whom he brings on a quest to spread the ashes of his wife from the highest peak in Midgard. But they draw the attention of a powerful stranger, turning a father and son's simple journey into a perilous adventure that spans many of the nine realms of Norse mythology.

Kratos' dark side, then, is soil for a sins-of-the-father story. Because he has to be tolerable in 2018, "God of War" tries to humanize him, and with some success. But it's the traces of his inhumanity that give the game and its inevitable sequel dramatic traction. They sow ambivalence toward Kratos, turning you against him as tales of the Aesir's cruelty suggest maybe deicide is the way to go.

And nothing will make you whiplash between resenting Kratos and embracing him more than his relationship with Atreus. The Spartan's gruff commands of "boy!" and rationed praise for his son's growing skill in battle evoke every distant father ever. Indeed, "God of War" leans hard on the trope, and its story ends in a place similar to that of fellow PlayStation 4 exclusive "The Last of Us."

But with its elegant writing and motion capture performances, Santa Monica Studio earns warmer moments between Kratos and Atreus that are not without their charm. And the changing dynamics of their relationship — as well as ones they develop with the Norse gods, who make Mount Olympus look chill — will intensify the wait to see where those relationships go in the game's sequel.

"God of War: Ascension" has a bad case of the late-generation blahs.

Maybe the signature achievement of "God of War's" combat is the way it strengthens the game's father-son relationship. Armed with a bow, Atreus can stun and damage enemies with shots that you call. They're the most essential against revenants, teleporting wraiths with staffs that can wreck Kratos with homing spells. His new axe swings right through them, but they can be made corporeal by his son's arrows. So you have to tell Atreus to shoot them just as Kratos swoops in for the kill. It's not catch, but it's every bit as cooperative.

Though he's all of 10 years old, Atreus rarely needs his dad to rescue him, so rescue mission haters can rejoice. Besides, "God of War" keeps Kratos busy hacking down his new Norse enemies.

The game magnificently reshapes the series's combat, first by switching the fixed camera of previous games to a more traditional over-the-shoulder perspective. The switch has a ripple effect on your defense: Because the right stick now controls the camera, dodging is moved to the "X" button. But the camera switch also means enemies can easily move outside your field of vision. You can lock onto them, but Kratos often faces up to six at a time, and many of them move rather frenetically, so locks often break. That's what makes his new shield the more trustworthy tactic.

The shield, in concert with the game's tighter frame and weightier movements, turns Kratos' fights into more technical, intimate affairs. He can parry with a timed button press, like the Golden Fleece could, leaving enemies vulnerable for a few precious seconds. And the feeling of them coming at you, with red alert icons flaring on your screen, is urgent in a way the series has never quite been.

The other new force that shapes "God of War's" combat is its system of upgradeable gear. Special attacks with adjustable cooldowns can be slotted into Kratos' weapons, as can enchantments that buff different stats into his armor. Between the two, you can build your Kratos to swing harder, withstand more damage or unleash more specials, depending on your play style.

I dug deep into the system during "God of War's" terrific endgame, which consists of three parts. The realm of Muspelheim has harrowing trials similar to those of Olympus in previous games in the series. The realm of Niflheim has a roguelike arena of poisonous fog Kratos can navigate on a timer, slaying enemies and opening treasure chests, to collect a special upgrade currency he must carry back to a safe zone or else forfeit a la "Dark Souls." And each realm is the site of one of the mythic Valkyries, who pose the mightiest challenge of anyone in "God of War."

If the gear system sounds like another action game trope, which it is, the Valkyrie battles show its value — and its limits. I beat many of the women Nordic warriors with strategies built around my cooldown attacks, and gear built around them. But the hardest of the battles affirm that versatile offense and attentive defense are still deadlier than any weapon in "God of War." Kratos then finishes the warriors off with a longtime bane of the series: quick-time events. But, thankfully, the game reduces the failable sequences of its predecessors to a simple prompted button press or two.

Kratos' axe has other uses, too. It's not only central to his family's story, it allows him to solve environmental puzzles and find loot. Many of those puzzles cleverly hinge on his ability to throw the axe and then, like a certain god of thunder, swiftly recall it to his hand with the press of a button. The wayfinding is fun enough to coax a visit to every shore on the game's Lake of Nine hub, and every realm Kratos and Atreus can reach via the bifrost. Cumbersome as its travel can be, I'll return to those realms now that "God of War" has added a photo mode. It was made for games this gorgeous.

As for the realms they can't reach, there's always the sequel "God of War" sets up. It may remain the story of Kratos, but I still want to see it told.

TL;DR: Kratos makes an almost flawless jump from Greek to Norse mythology in "God of War," which reinvents his fighting into a more technical and intimate thrill and, mostly, reconciles the absurd sadist he was then with the stoic father he is now.

DISCLOSURE: I received a review copy of this game from Sony and completed its main quest and most of its side quests on normal difficulty in 20 hours.

TL;DR: Kratos makes an almost flawless jump from Greek to Norse mythology in "God of War," which reinvents his fighting into a more technical and intimate thrill and, mostly, reconciles the absurd sadist he was then with the stoic father he is now.

DISCLOSURE: I received a review copy of this game from Sony and completed its main quest and most of its side quests on normal difficulty in 20 hours.

The Citizen's gallery listings for Jan. 20-26: Cayuga Naturally and more

Rizzo shared memories about who her husband was — with a common theme being how incredibly loving he was to everyone he met, making sure to tell everyone he loved them.

The French actor portrayed the young Hannibal Lecter in 2007's "Hannibal Rising" and is in the upcoming Marvel series "Moon Knight."

"The Agitators" by Dorothy Wickenden, a new book about Harriet Tubman, Martha Coffin Wright and Frances Seward, will be the subject of an upco…

Dec. 14, 2022, will mark 100 years since Theodore Case recorded the word "hello" on a film strip with no background noise or scratching.

The 200th anniversary of Harriet Tubman's birth will be the theme of a seven-month celebration beginning in March in Auburn.

Kratos rages out in "God of War."

Kratos' son, Atreus, is one of several introductions in Sony's "God of War."

Kratos and Atreus face off with a troll in "God of War."

Kratos and Atreus journey to the top of a mountain in "God of War."