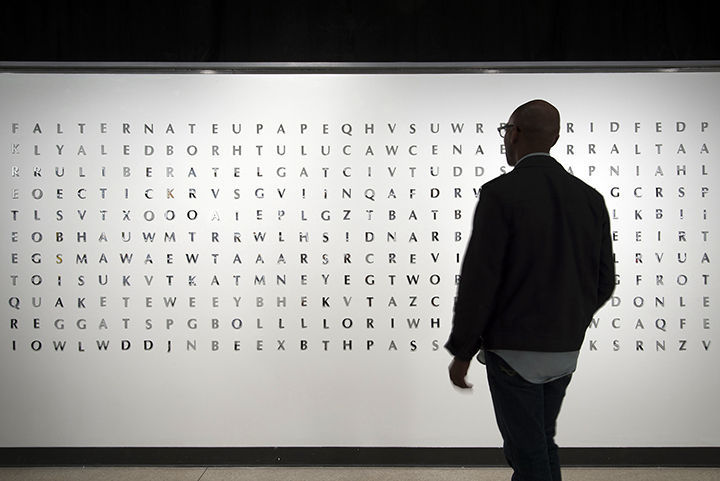 The work "51 Synonyms for Oscillate" by Pato Hebert. 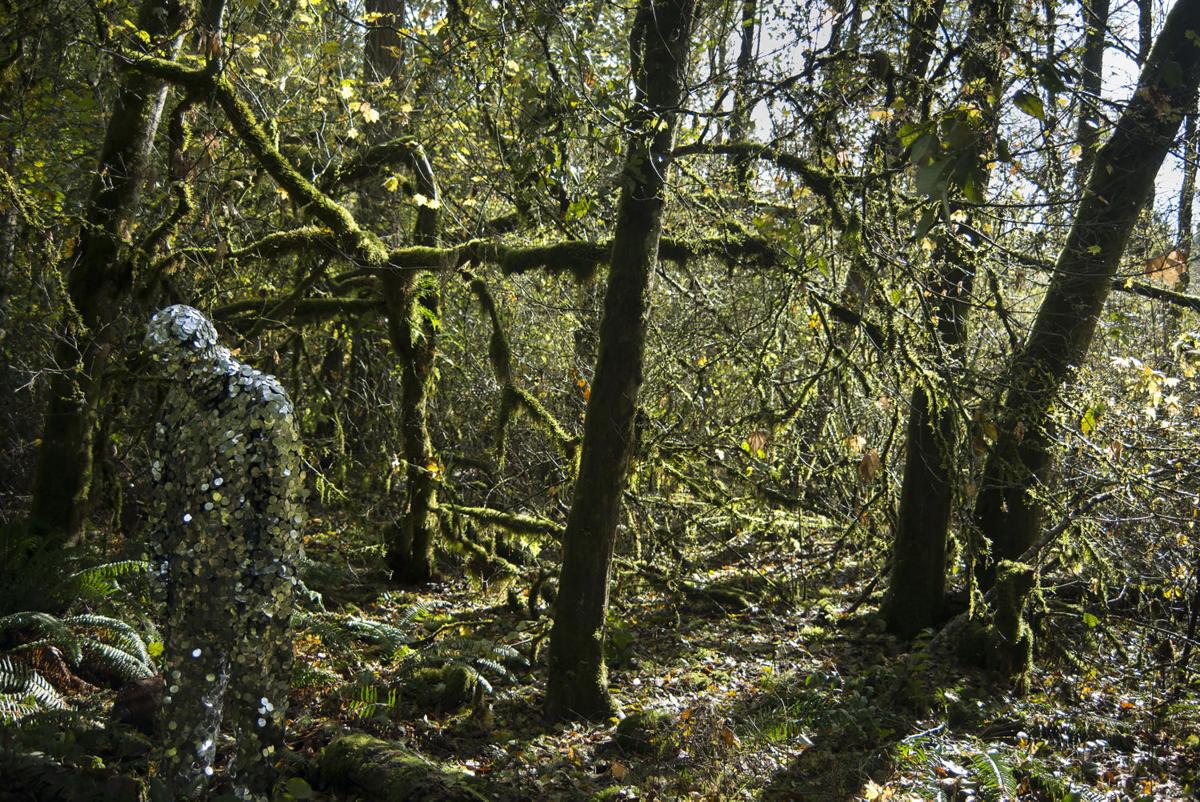 "The Oscillator in Tualitin Hills Nature Park" by Pato Hebert.

A suit of mirrors, a word search, a massive photo mosaic — all touch on Pato Hebert's interest in interconnectedness.

An associate arts professor in the Art and Public Policy Department at NYU's Tisch School of the Arts and a cultural worker with the Global Forum on MSM & HIV, Hebert will also be at the Aurora college through December as a Scholar in Residence. His work with Wells students will include several workshops, a photographic addition to his exhibit and a site-responsive wall text that will be installed in early December.

I spoke to Hebert Wednesday about the works that make up "Make No Loud Noise":

Q. The figure in the photos that make up the series "In, If Not Always Of" — it appears to be a suit made of mirrors, and it has this kind of camouflage property in the right setting. Tell me about the message of these photos.

Q. So how did you make that skin? I imagine it took some labor.

A. I was working with my assistant at the time, an amazing artist named Aleta Lee, and at first we experimented with little mirrors — literally little square mirrors that come in tile strips. And we realized that it was too heavy and also not flexible enough. So then we started thinking of something more like chainmail. We needed something malleable, and that could layer. And then Aleta discovered these little reflective pallets, so basically we then took winter clothing and we skinned it with these little plastic, reflective pallets. And that's how we made it.

Q. Are you the person who's wearing it in the photos?

A. That is a good question that I'm tempted not to answer, but yes, it is me inside the costume. They are not self-portraits, but I work with my own body just for expediency and consistency. Because I'm always the one making the picture. Ideally, these are not pictures of a human in a costume. Hopefully, the viewer experiences a different kind of presence that, sometimes, can be jarring, and at other times, quite seamless.

Q. Tell me more about the large word search — obviously it's something people will not only see, but try to solve. So take me through what you want that experience to be like for them.

A. This piece is called "51 Synonyms for Oscillate." It is made of mirrored acrylics, plastic mirrors. And it's the oldest piece in the show, from 2012. I love word searches, I always have, since I was a boy. I like the game of trying to find. And, like all reading, it's visual, but it's also a puzzle. I like synonyms because they help us get at the nuance of meaning. And so turquoise and navy blue are kind of the same, but they're kind of different. So I became interested in making puzzles out of synonyms. And I'm interested in oscillation because of how mysterious and expansive it can be. And I had an idea to play with those different meanings of "oscillate" with a material that would embody the ideas. So when you're in front of it, the images start dancing because of the reflections. My hope is that the viewer would have an oscillating experience as they move in front of the letters that seem to dance.

A. It is. It's very much about perception and meaning, and the act of reading and recognition.

Q. Another major piece in the show, this grid of photos — that must have been another big chunk of time to not only shoot, but assemble. Take me through that process.

A. It is taking time still, yes. I work in international HIV prevention and advocacy. One of the things we do is advocate for the health and human rights of gay men worldwide. That work takes me to the International AIDS Conference every two years. At the conference, I am always amazed at the scale of production and inspired by how many people are committed to ending the epidemic, but I'm also left a little bit dizzy and reflecting on how best to use our limited resources. This piece reflects the scale of the pandemic, the effort on many people's part to respond, and wonders how we might do so effectively.

With the holiday season in full swing, there will be plenty of opportunities to catch live music in the Cayuga County area this weekend.

A pianist from Auburn will return to his hometown to premiere his first release of original music this weekend.

Renowned Auburn bassist Peter Mack will perform in the area twice this weekend with a new quartet of big musical names.

What to expect from returning Dickens Christmas in Skaneateles

Black Friday will be Bright Friday once again, as Dickens Christmas will return to the village of Skaneateles this holiday season.

Christmas in Aurora will herald the holiday season with crafts, a free concert and more Saturday, Dec. 4, in and around the lakeside village.

The COVID-19 pandemic kept Santa's sleigh off Genesee Street last year, but he and Mrs. Claus will be back for the city of Auburn's 34th annua…

The MasterWorks Chorale Chamber Singers will perform a concert of Christmas carols and more at 2 p.m. Sunday, Dec. 5, at Willard Memorial Chap…

Skaneateles Sings to welcome holidays in the village

With Dickens Christmas underway once again, the village of Skaneateles will gather for its annual village holiday program Skaneateles Sings on…

The Citizen's gallery listings for Dec. 2-8: Cayuga Naturally and more

The work "51 Synonyms for Oscillate" by Pato Hebert.

"The Oscillator in Tualitin Hills Nature Park" by Pato Hebert.