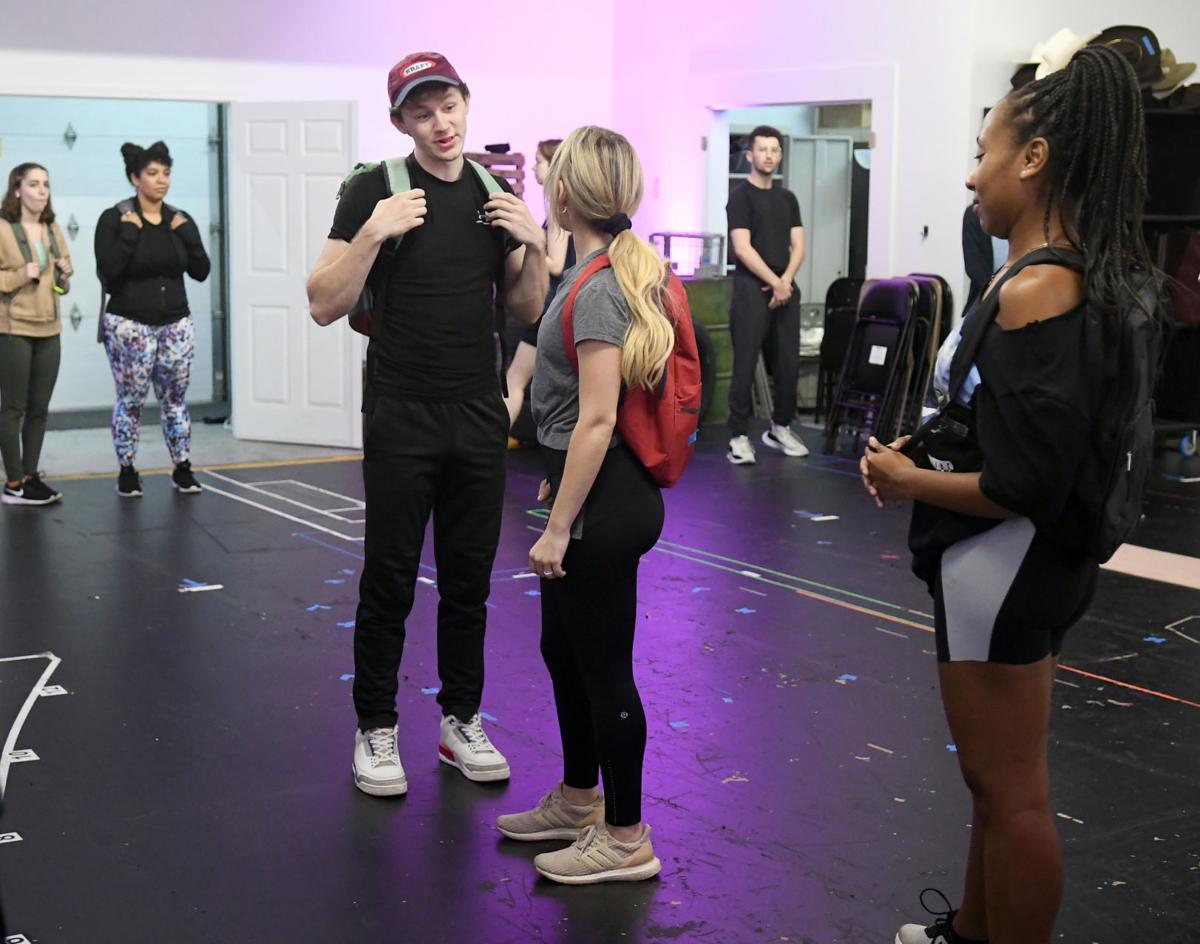 Brody Grant, left, and Hannah Hunt rehearse a scene from The Rev Theatre Company's production of "Footloose: The Musical." 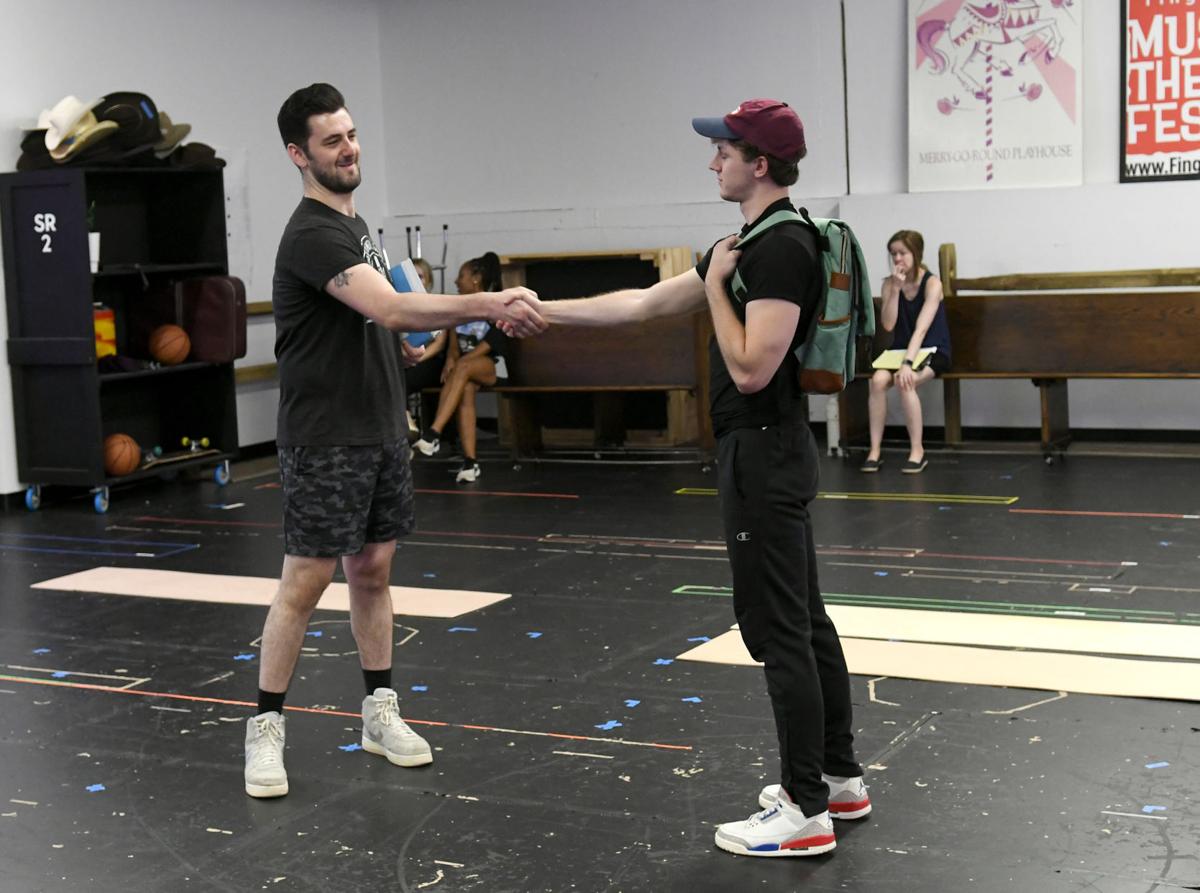 Brody Grant, right, and Alec Michael Ryan rehearse a scene from The Rev Theatre Company's production of "Footloose: The Musical."

AUBURN — Like most performers, Brody Grant tries to find a little bit of himself in his roles.

That's not hard when it comes to the role Grant will have in The Rev Theatre Company's next show at the Merry-Go-Round Playhouse: "Footloose: The Musical."

Like Ren McCormack, the protagonist of the show and the cult hit 1984 film that inspired it, Grant moved to a small community in the middle of his childhood. But his connection to the rebellious character, made famous by Kevin Bacon, doesn't end there. In Georgia, where Grant moved with his family from Michigan, he later discovered his love of performing.

And his first role, in sophomore year of high school, was none other than Ren McCormack.

"Everyone's been that outsider at some point in their lives," Grant said about the character during an interview with The Citizen on Tuesday at The Rev's offices in Auburn.

"Ren realizes he's an outsider. Then, through hard work and perseverance, and listening to his (opponents), he grows and learns from it."

WHAT: "Footloose: The Musical"

The listening and learning that McCormack does, along with the rest of the rural community of Bomont, makes "Footloose" as timely now as it was in 1984, said Alec Michael Ryan, who plays Willard.

As the show begins, the community is divided over the amount of freedom it should allow its children due to a car accident that killed four of them years prior. Led by the Rev. Shaw Moore (Christopher Swan), father of one of those four children, Bomont outlaws alcohol, drugs and dancing as a result. But once McCormick arrives in town, and is joined by Willard as well as Moore's equally rebellious daughter, Ariel (Hannah Hunt), the children challenge their elders by organizing a senior prom. They find an ally in Moore's wife, Vi (Julie Cardia), who tries to appeal to her husband's humanity.

Those who've seen "Footloose" on screen or stage may associate the story with the '80s, from its loud fashion to the crooning of Kenny Loggins on the title song.

But Ryan believes the heart of that story — a community in conflict — isn't nearly as dated.

"That's the goal for the community, to realize we're actually better as a team and we can help each other get through this as opposed to everyone going in their own corner and not talking," he said.

"I think that is totally applicable to everything going on in the world right now."

The youth of the community, Cardia added, is critical to that process. The arrival of McCormack and his mother, Ethel (Sistina Giordano), shows Bomont it "really has to embrace the youth."

Brett Smock, the director of the show and the producing artistic director of The Rev, told the cast of "Footloose" that he wanted to focus on those messages in his production, Ryan said. On the stage of the Merry-Go-Round, the show will also move away from the violence against women in the film, such as Moore stopping short of slapping Ariel, instead of actually doing so like in the film.

But The Rev's production will hit many of the nostalgic marks people expect of "Footloose," including its iconic soundtrack. Along with the title song, it features "Holding Out for a Hero," "Waiting for the Boy," "Almost Paradise" and more. And those songs will be brought to life on stage by a talented cast and ensemble of dancers, Grant said.

"There's still an athletic, MTV-ness to the dancing, but also a really current vibe," he said. "It's timeless."

Gallery: 'Footloose: The Musical' at the Merry-Go-Round Playhouse

Brody Grant, left, and Hannah Hunt rehearse a scene from The Rev Theatre Company's production of "Footloose: The Musical."

Brody Grant, right, and Alec Michael Ryan rehearse a scene from The Rev Theatre Company's production of "Footloose: The Musical."