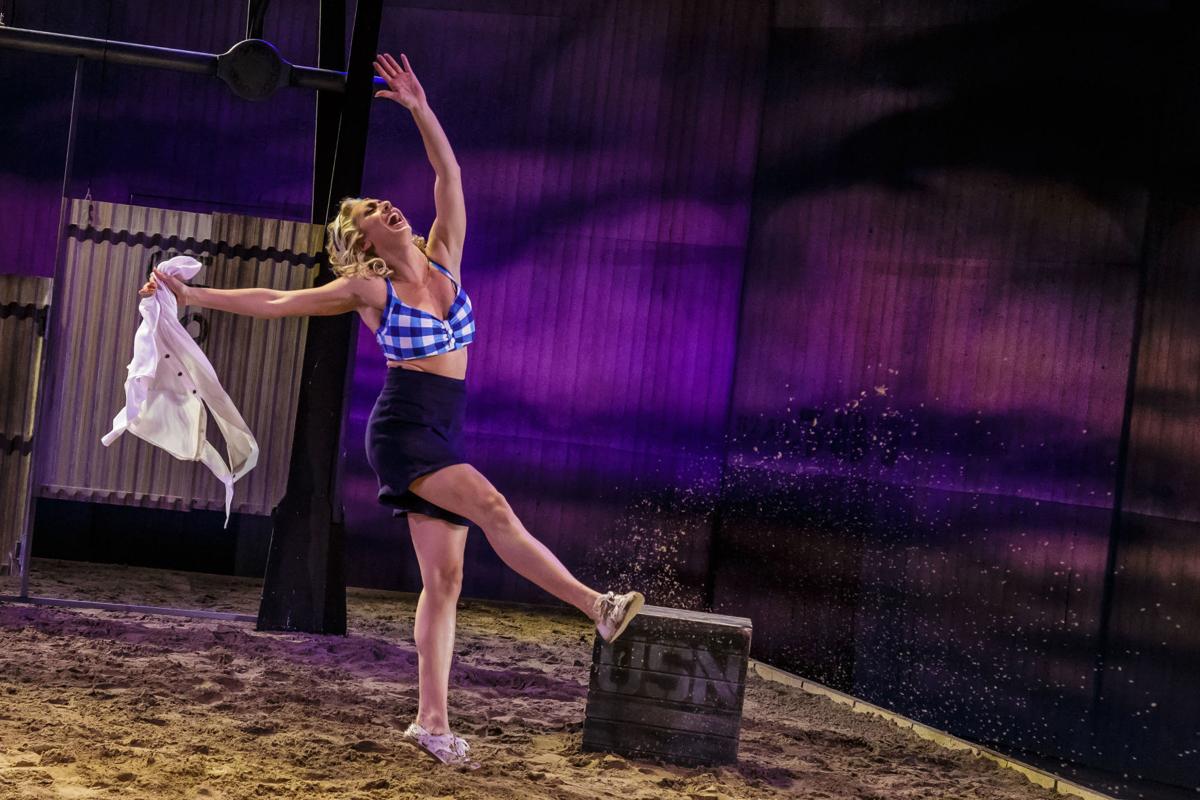 Nellie (Sarah Ellis) celebrates being "in love with a wonderful guy." 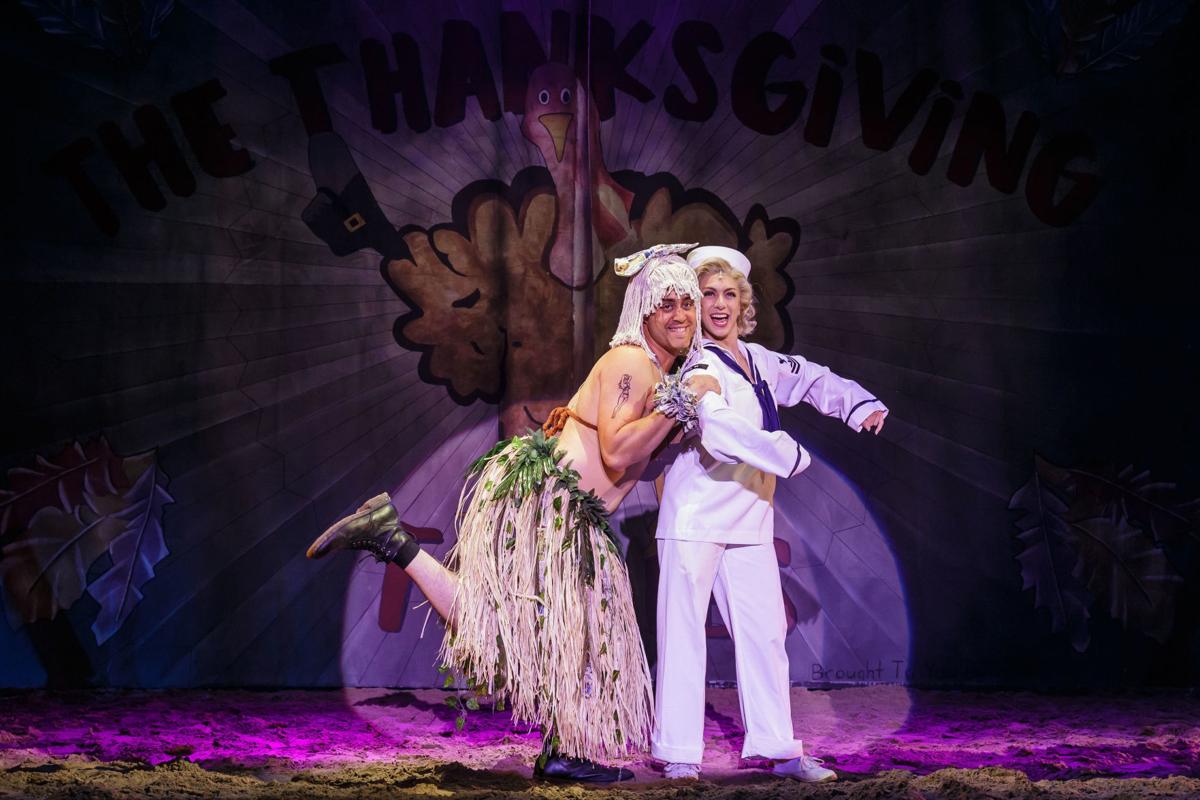 Nellie (Sarah Ellis) and Billis (Reed Campbell) close out the Thanksgiving show with their performance of "Honey Bun." 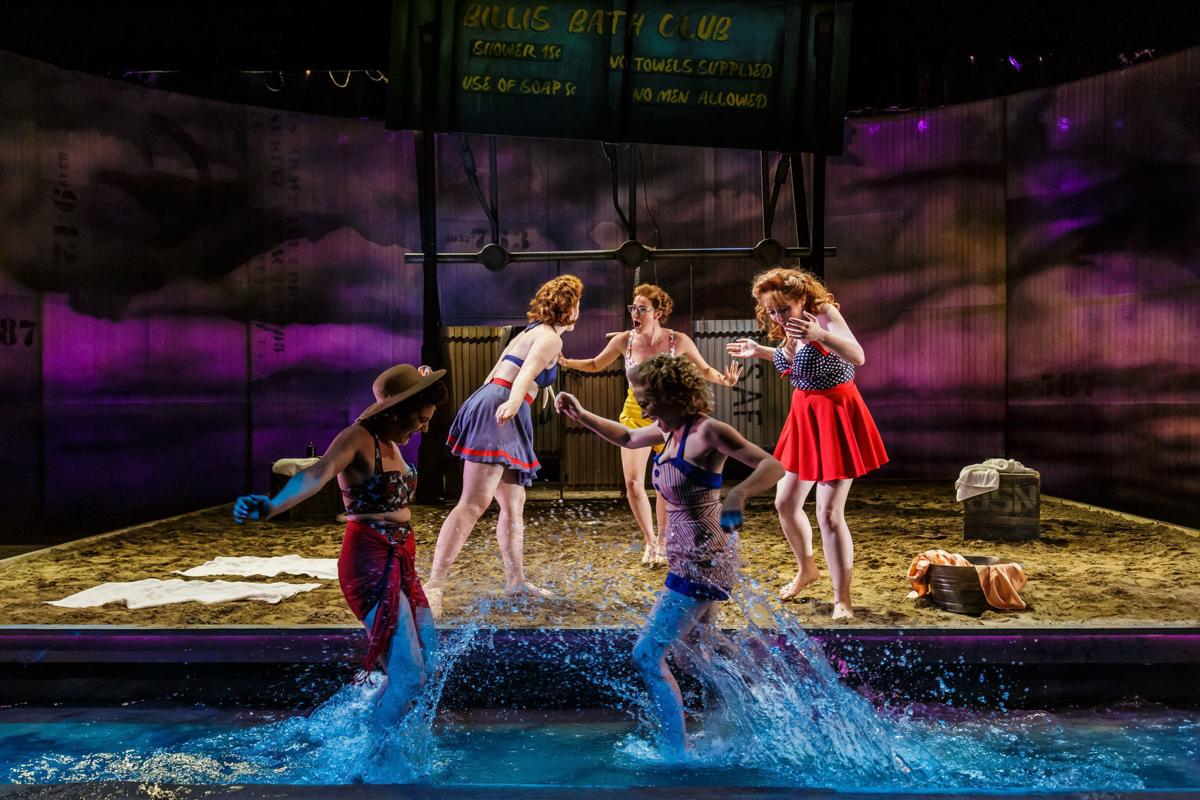 The nurses splash playfully at the beach. 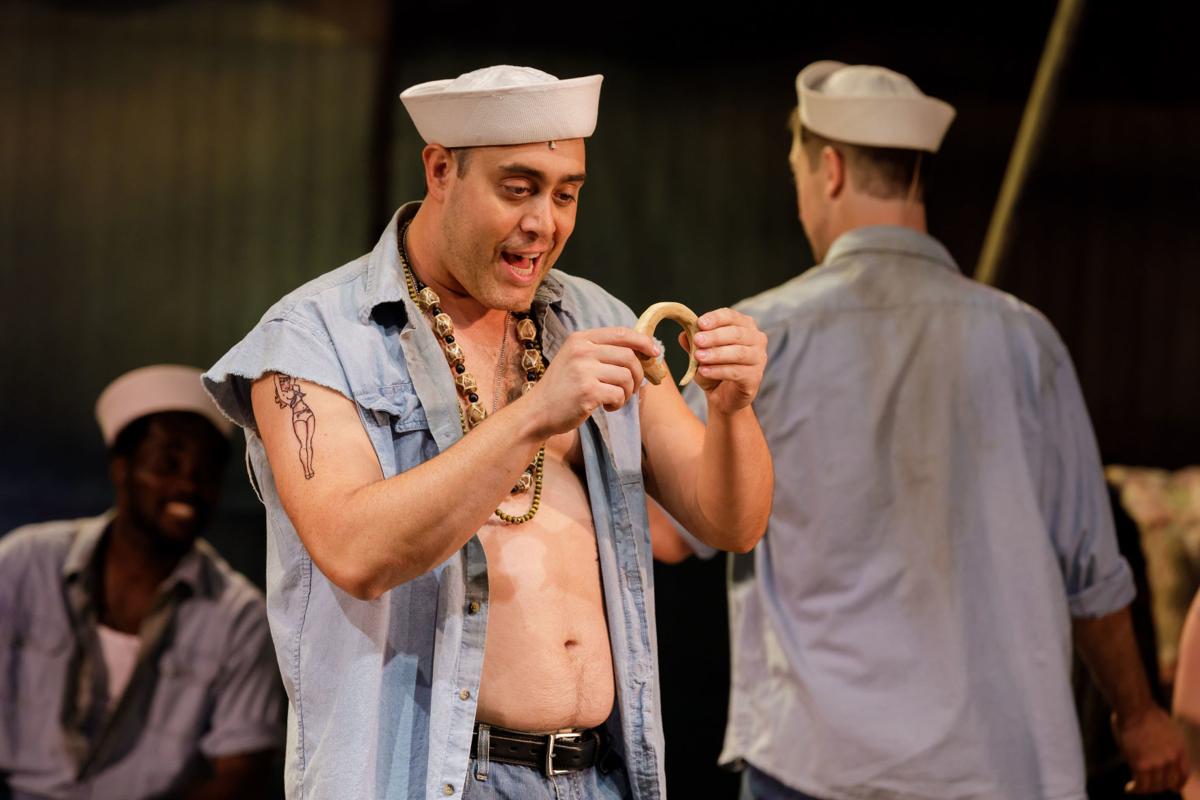 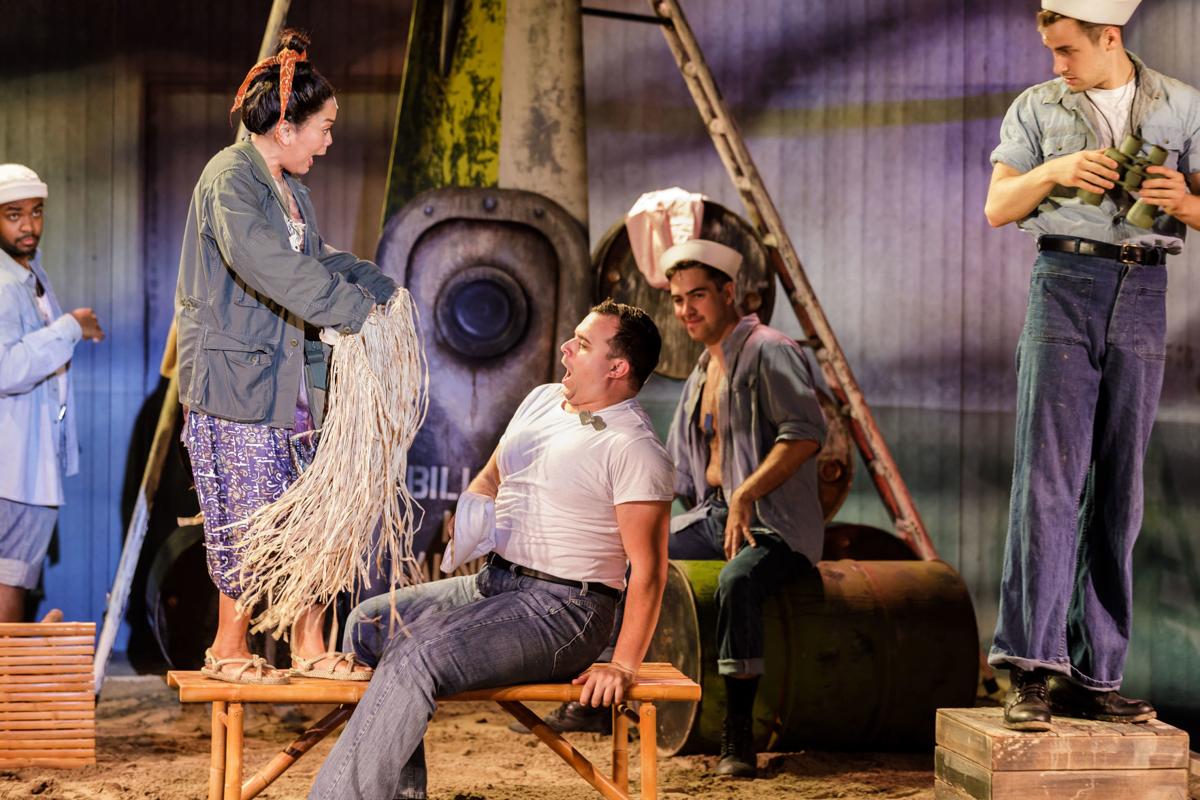 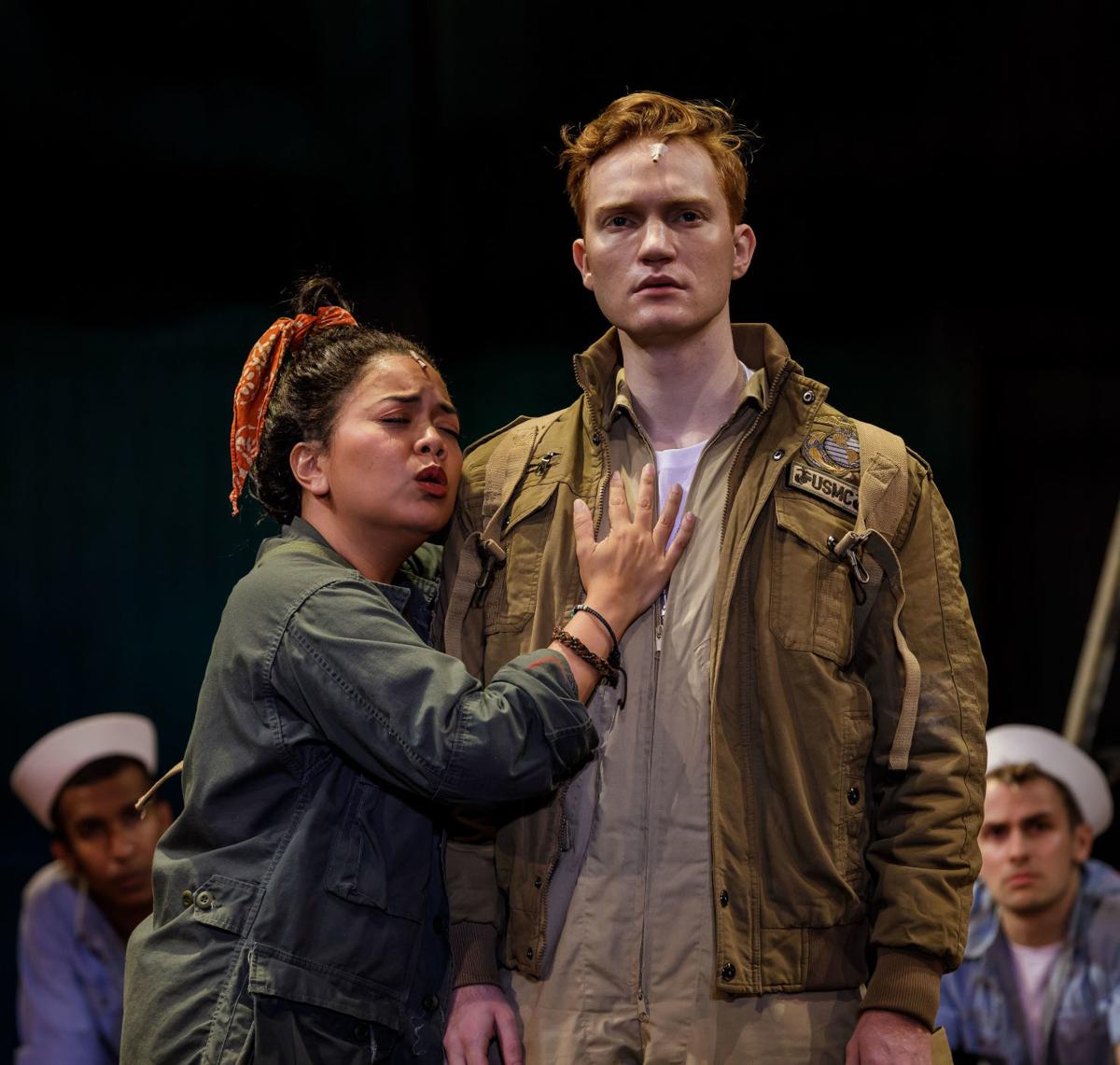 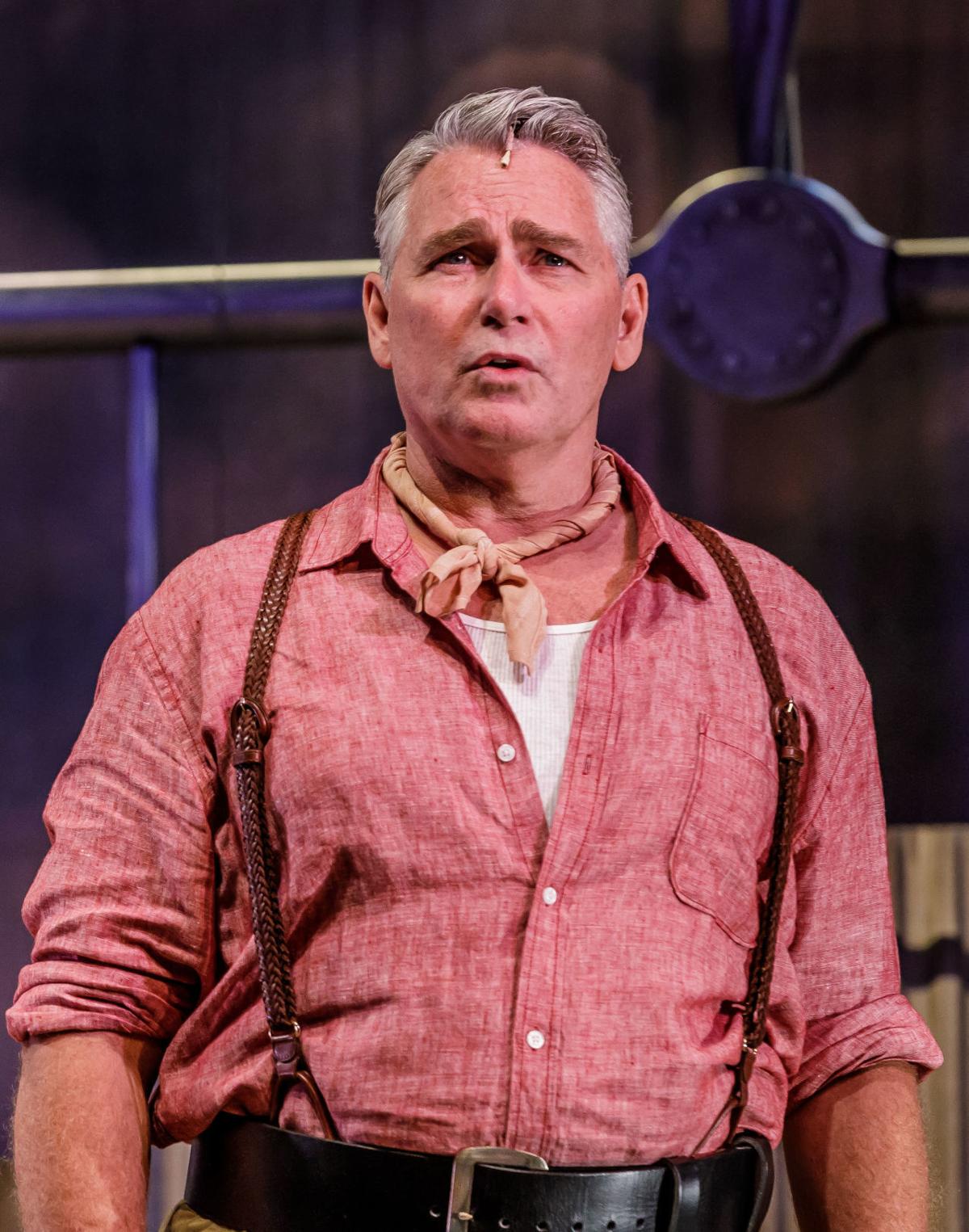 Usually, the set of a show is there for us. It's there to transport us to the show's time and place, to thicken its moods, to symbolize its themes.

The set of "South Pacific" at the Merry-Go-Round Playhouse does all that. But it sure seems to be there for the cast, too.

The Finger Lakes Musical Theatre Festival's production of the 1949 Rodgers & Hammerstein classic takes place atop a sandbox the size of a beach volleyball court, and it's surrounded downstage by a wading pool with about 6 inches of water. So the audience has no trouble being swept away to the island, whose native population must abide occupying American forces at war with Japan.

But the set works even stronger magic on the performers. The sight and feel of the beach beneath their feet seems to bring out their best, and as a result, they realize every moving, funny and thoughtful moment of "South Pacific" to its absolute fullest. It's the most well-rounded and wide-reaching show to take the stage of the playhouse this season, if not the last five.

WHEN: Continues through Aug. 28

It's easy to imagine why the set has that effect on the cast. After all, 99% of the stages they take are hard, black flooring, adorned only with spike tape. (And having to go without those marks makes the festival's "South Pacific" set all the more impressive.) So the very tactile sensation of sand and water possesses the performers in a manner similar to method acting. And unlike most set pieces, which are positioned behind them, the show's beach is almost always within their field of vision. They can't escape its sway, and they make sure we can't, either.

Or maybe performing on such a surface is just plain fun. Having sand to kick and water to splash certainly seemed to make the cast of "South Pacific" swing their legs all the harder, particularly Sarah Ellis. As Nellie Forbush, the Navy nurse falling for French plantation owner Emile de Becque (Christopher Carl), Ellis anchors the show with undeniable charisma and comic talent. She showcases both on musical number "A Wonderful Guy," rolling around in the sand and punting handfuls into the air with the spirit of a woman who has indeed just realized she's in love with one.

Carl, whose character's half-Polynesian children put his romance with Forbush at risk, complements her southern gracelessness with the poise and vocal authority of someone who's played the part several tours over. (Which he has, though his accent remains less French than nonspecifically foreign.) Other cast standouts include Reed Campbell, who brings extreme '40s goofball energy to the part of Luther Billis and shares the stage with Ellis on the show's gender-swapping musical highlight, "Honey Bun." As Bloody Mary, the Tonkinese grass skirt vendor who tries to marry her daughter to Lt. Joseph Cable (Michael Deni), Melody Butiu is a marvel. Few can wring laughs and heartache so well — and she does both from the same two-word phrase she's taught by her sailor customers. And Deni delivers the show's most pointed comment on the implicit racism motivating his and Ellis' characters, "You've Got to Be Carefully Taught," with teeth-gritting conviction.

But the pull of the setting of "South Pacific" extends to every performer. Under the direction of Scott Weinstein, they move with passion and purpose, whether they're hypnotically placing wicker chairs in the sand, maneuvering around a bamboo maze or soaking up the sun. Exotic as the set is, though, it's not the star of this tropical triumph. Its transportive effect on the cast ensures that they are.

Professor, Tubman descendant to talk her legacy at Auburn college

"Harriet Tubman: Her Life and Legacy" will be the subject of a presentation from 4 to 5 p.m. Monday, Feb. 17, in the Student Lounge of Cayuga …

A month away from St. Paddy's, Auburn bar to celebrate St. Practice Day

St. Patrick's Day is a month away on Monday, and one Auburn bar is giving people an opportunity to practice celebrating.

Spotlight Studio, of Auburn, was nominated for a Syracuse Area Music Award for Best Other Style for its Christmas album, "A Holiday Spotlight."

"Parasite" took Hollywood’s top prize at the Oscars on Sunday night, along with awards for best director, best international film and best screenplay. Here's the full list of winners.

Joan Jett and The Blackhearts will be the final Chevy Court performers of the 18-day 2020 New York State Fair.

Renewed TV shows 2020: Find out which series will return for another season

Get a full rundown of all of the series returning for new seasons this year.

We’ve had to say goodbye to some beloved musicians, athletes, actors and more. Here's a look at the stars we've lost so far in 2020.

Nellie (Sarah Ellis) celebrates being "in love with a wonderful guy."

Nellie (Sarah Ellis) and Billis (Reed Campbell) close out the Thanksgiving show with their performance of "Honey Bun."

The nurses splash playfully at the beach.