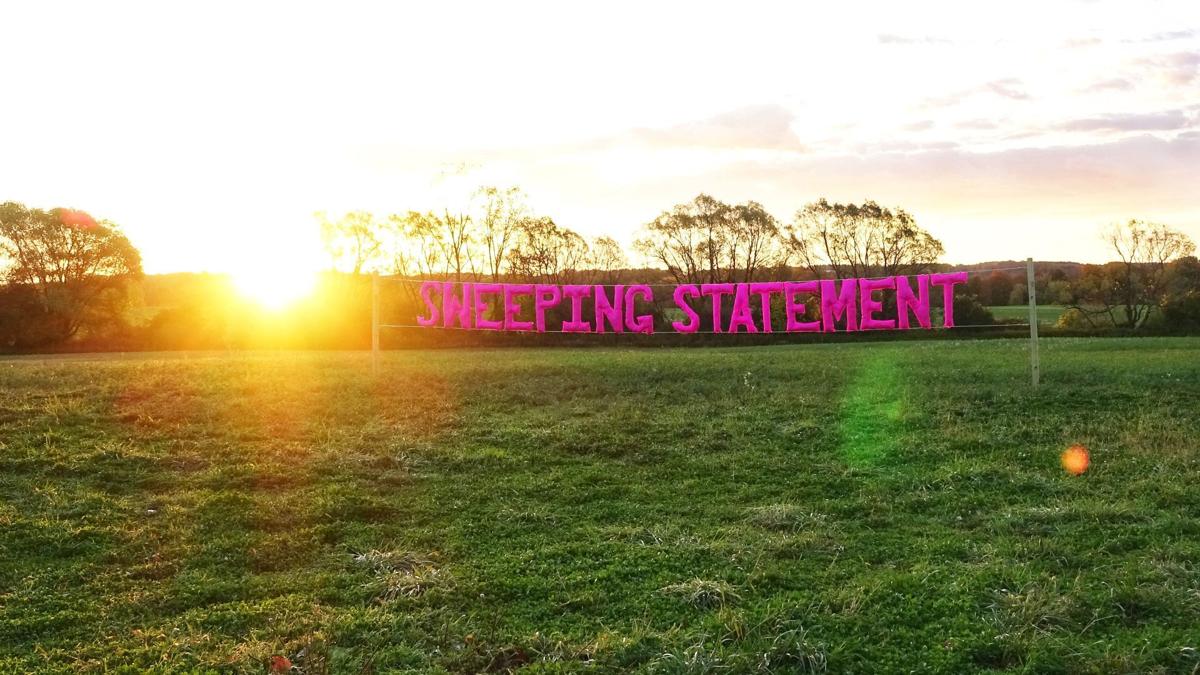 Artist Anna Warfield's public installation in Skaneateles, "Sweeping Statement," will be on display at Pork Street and East Lake Road in Skaneateles through Nov. 28. 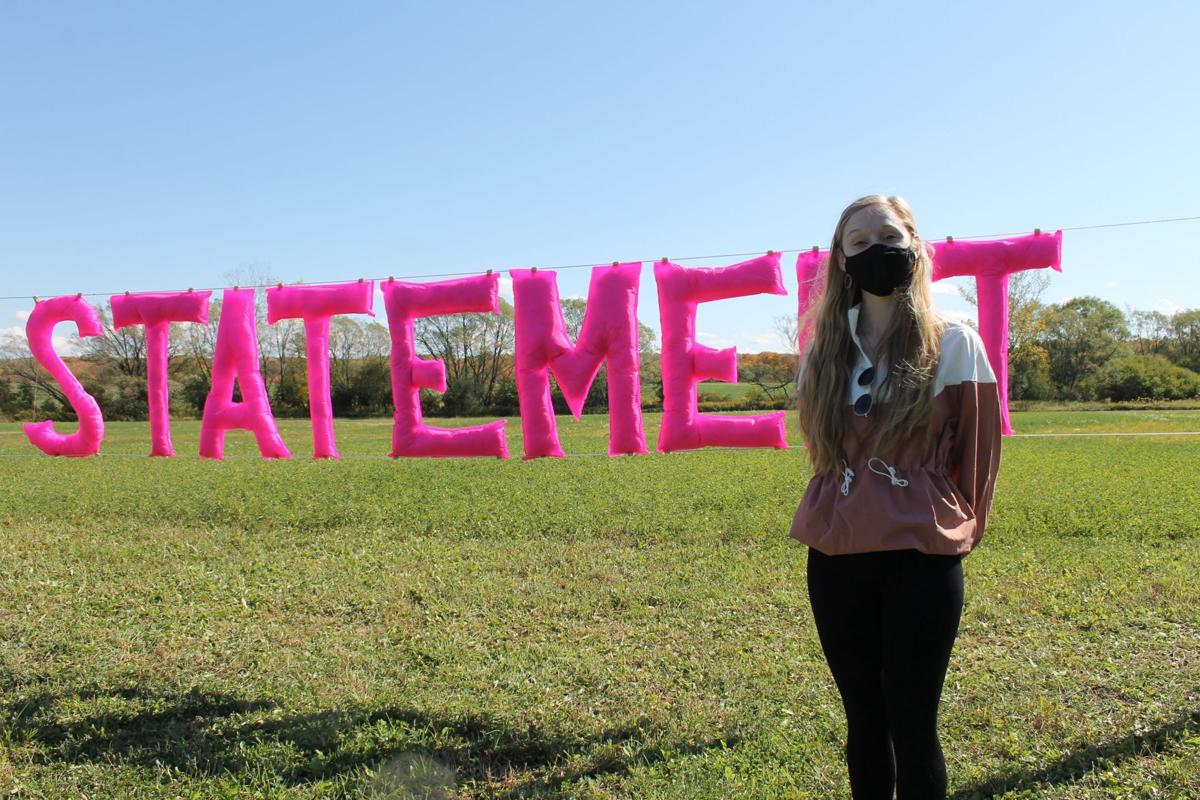 A new public art installation in Skaneateles takes inspiration from COVID-19 — and takes a tongue-in-cheek shot at some of the platitudes being shared in response to the pandemic.

On display at East Lake Road and Pork Street in the town of Skaneateles is "Sweeping Statement," a soft sculpture by Binghamton artist Anna Warfield. The title of the work is spelled out by stuffed pink letters made of water-resistant nylon and suspended on cables between two posts. Made to withstand central New York's volatile fall weather, it will be on display during daytime hours through Nov. 28.

Warfield told The Citizen she was supposed to exhibit her text-based sculptures at the Schweinfurth Art Center and Cayuga Museum of History & Art this year before the pandemic began, closing both sites in March. In response, Warfield decided to scale her work up, from a gallery to a landscape, so people could see it safely. Though the center and museum have since reopened under New York state's guidance, asking people to come there to see her work felt "ethically unsound," she said. She then began conceiving "Sweeping Statement," which took about a month to create.

Through the Schweinfurth, Warfield found a site for the work on the property of Jessica Arb Danial, an art collector and adviser who is president of the Everson Museum of Art Board of Trustees.

"Anna needed a stage, I had a field, so why not use open (unused) spaces and beautify them with public art while also using it to challenge the passerby with Anna's thoughtful artwork?" Danial said.

The words were chosen to complement their bucolic background, Warfield said. But they also satirize the "unhelpful platitudes" people share during the pandemic — sometimes through letter balloons.

"The text itself is meant to be anything for anyone, but for me it relates more toward frustration," she said. "I see a lot of meaningless statements being said. That was kind of the idea behind this."

Auburn sculptor in local show: Art needs to be seen in person

When the Schweinfurth Art Center reopened last week, it looked a little different than it did when Auburn sculptor Stephen Spinner began makin…

But "Sweeping Statement" is pragmatic in more ways than its message. The work also anticipates a future where more work is displayed outside the confines of gallery walls. And the pandemic hasn't paused the appetite for art, Warfield noted. Many artists have more time to create, and people who now work from home are more interested in making their walls visually interesting.

So far, Warfield is finding the transition a natural one. It was already difficult for her to display her work in some galleries, as it couldn't be suspended from their ceilings. She doesn't have that problem outdoors. But what she does have, she's found, are viewers of her work who may not have seen it at a gallery. Many friends and family have stumbled upon it, she said, and a nearby construction worker stopped to say how inspiring he and his coworkers found it. One neighbor of Danial's even installed, in bright blue letters, their own response to the work: "Mop it up."

"There's not an inappropriate response to art," Warfield said, "as long as there is a response."

This year, the annual "It's a Wonderful Life" Festival in Seneca Falls has not one, but two villains whose machinations will bring the communi…

The Friday after Thanksgiving marks the beginning of Dickens Christmas in the village of Skaneateles, and despite COVID-19, this year will be …

Beyoncé leads Grammy nominations with 9. See who else is nominated.

Beyoncé picked up song and record of the year bids with "Black Parade," which she released on Juneteenth. See who else earned Grammy nominations today.

Why didn't Nev Schulman win 'Dancing with the Stars'?

Schulman was the best. But “DWTS” doesn’t just reward that; it factors in popularity.

In posthumous message, Alex Trebek asks viewers to 'be thankful' and 'keep the faith'

The message was recorded earlier this year as part of the Thanksgiving Day episode. "Jeopardy!" tweeted the clip Thursday morning, ahead of the planned broadcast.

For Auburn's Holiday Parade, the 34th is the opposite of a miracle.

Celebrities and their booze: Can you match them up?

See if you can match the type of alcohol to the celebrity behind the brand.

Artist Anna Warfield's public installation in Skaneateles, "Sweeping Statement," will be on display at Pork Street and East Lake Road in Skaneateles through Nov. 28.