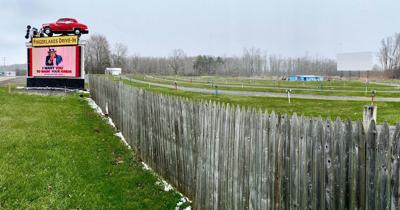 The coronavirus pandemic has created two futures for movie theaters. In one of them is the unlikeliest of new beginnings. In the other? Maybe the most inevitable of ends.

The first, and nearer of those futures belongs to drive-ins.

The pandemic, and its accompanying need for social distancing, almost seems designed to benefit drive-ins. They offer you the opportunity to get out of the house and see a newly released movie, same as any theater, but without leaving the comfortable quarantine of your car. It's all the entertainment and none of the exposure. A Hollywood screenwriter couldn't have scripted it any better.

As a result, America's long-suffering drive-ins have been predicted to experience a resurgence this summer. And this week, the handful in New York got the green light to open for the season Friday.

One of them will be Finger Lakes Drive-In in Aurelius. Open since 1947, it's the oldest continually operating drive-in theater in the state, owner Paul Meyer claims. He told Syracuse.com Monday that the theater will return for its 74th season this weekend with "Trolls World Tour." Showtime is dusk, and admission is $25 per car.

Finger Lakes Drive-In opens for season — what about the smoke shop behind it?

As many dramatic stories grace the screen of the Finger Lakes Drive-In this summer, one will drag on for the 70-year-old business itself.

(Meyer, who has expressed dissatisfaction with my reporting on the smoke shop that opened behind the drive-in a few years ago only to close amid litigation, declined comment to The Citizen.)

While drive-ins like Meyer's are poised to pack in cars for as long as the pandemic continues, indoor movie theaters face the opposite fate — the other, more distant future.

Now closed in New York and many other states in order to encourage social distancing, those theaters aren't making any money at the moment, obviously. And just like gyms, salons and other businesses that can't open their doors, theaters are being financially damaged by that alone. But something more unique to them threatens their ability to make money even after the pandemic.

That would be the growing belief that we just may not need movie theaters anymore.

Some studios have reacted to the pandemic by postponing theatrical releases, such as tentpoles "F9," "No Time to Die" and "Wonder Woman 1984." But other studios have simply accelerated the arrival of their movies onto video-on-demand and streaming platforms. This week saw "Capone," starring Tom Hardy, arriving on VOD after having its theatrical release canceled, as well as Lin-Manuel Miranda announcing that the film version of "Hamilton" will hit Disney Plus this July 3, instead of theaters in October 2021 as originally planned.

If the implications of those moves aren't clear enough, consider another one: "Trolls World Tour." Due to the pandemic, Universal Pictures announced in March that the lucrative sequel would hit VOD on the same day as its theatrical release, April 10. And that move, which the studio allegedly made without consulting theater owners, led AMC Theatres to announce that it would no longer license Universal movies. Regal Cinemas later followed suit, saying the chain would "not be showing movies that fail to respect the (theatrical) windows."

It's hard to fault AMC and Regal for reacting that way. I'd be mad, too, if my entire business model was becoming obsolete before my eyes.

The concert stages, gallery walls and other spaces where arts and culture happen in Cayuga County are currently closed due to the coronavirus …

Now, there's a lot to love about the theatrical experience. You don't laugh at new comedies in your living room the way you do in an auditorium of a few hundred people laughing just as hard. Jump scares, jaw-dropping stunts, heartwarming embraces — they all carry such grander weight in the theater. And that's to say nothing of the social ritual of popcorn, smirking at previews, and so on.

But, for me at least, all that has lately been outweighed by the sheer convenience of watching movies at home. Not only does the presentation quality approximate that of theaters now more than ever, but you can pause to go to the bathroom, rewind if you missed something, and eat and drink whatever you want. Loud audience members and lit device screens aren't distractions, either.

The volatile box office numbers of the last 10 years suggest others feel the same way. And so, if they're anything like me, they wonder why we can't watch new releases at home, too.

The pandemic just made that question significantly more pressing. Studios can put their newest, biggest movies on VOD the same day they hit theaters, as Universal showed with "Trolls World Tour." And, as that movie's $100 million haul showed, studios can make comparable money doing so. So why don't they? Especially now that it's in the interest of public health?

Why, indeed, do we even need movie theaters anymore?

The answer could be that weight, or that social ritual, of the theatrical experience. After all, those are some of the reasons that drive-ins are predicted to rebound this summer. But what about afterward? Those irreplaceable aspects of the experience should ensure the survival of some theaters — probably the ones that make the experience as irreplaceable as possible. But not all of them.

I hoped to ask the owners of the Auburn area's two multiplexes for their thoughts on the question — Track Cinema and the Auburn Movieplex — but neither responded to requests for comment.

When, or if, those theaters reopen, they and others across the country will face the question regardless. The communal magic of the experience they offer will be pitted against the reality of possible exposure to a deadly contagion. And as both audiences and studios choose between returning to multiplexes or streaming at home, so, too, will they choose the future of movie theaters.

The Finger Lakes Drive-In in Aurelius will host a weekly series of classic and hit movies Wednesdays beginning July 1.

Cayuga County businesses left out of phase four disappointed, but not deterred

Overture (From "The Hateful Eight" Soundtrack)

Overture (From "The Hateful Eight" Soundtrack)