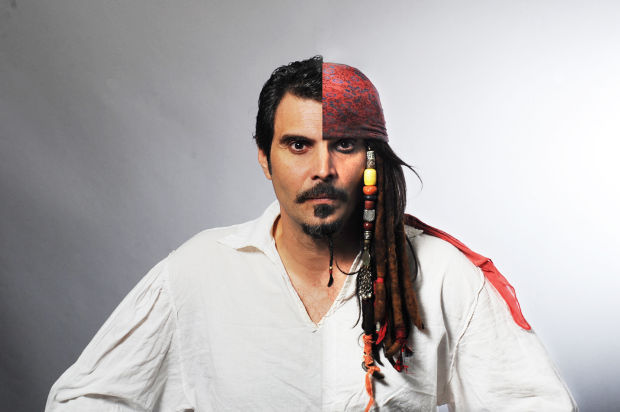 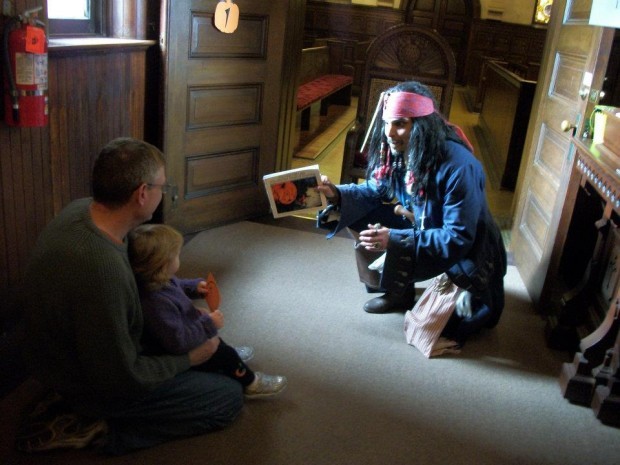 Inside the Capt. Jack impersonator who seems to be at every Auburn community event, leaving children's smiles in his wake, there is a man.

And inside that man, there's a little kid with a big heart.

For Rick Martinez, portraying Johnny Depp's hit "Pirates of the Caribbean" character is a full-time job. About 10 times a month he draws on the eyeliner, weaves in the chin braids and bends his gait into a boozy swagger. He's not only the host of his own Haunted Pirate Ship on his 148 Perrine St. property, collecting two truckloads of food a year for the Calvary Food Pantry, but also an emcee, a greeter, a children's story time reader, or sometimes just part of the scenery. And soon, he'll parlay his pirate tics into an original character, Capt. Richard Crowe, as part of a new TV project.

It all started on a whim, though.

In 2005, building a smaller predecessor to the Haunted Pirate Ship with a friend, Martinez was asked what costume he'd wear when the attraction opened. He replied with Blackbeard, maybe Capt. Morgan. The friend then mentioned "Pirates of the Caribbean: The Curse of the Black Pearl," which Martinez hadn't seen.

One-hundred and thirty-five minutes later, Martinez had his costume.

"People say the resemblance is uncanny," he said. "I don't normally look like Johnny Depp, but as Capt. Jack I look like Capt. Jack."

Martinez would only watch "The Curse of the Black Pearl" once more — he'll nod off or pay attention to something else if his children put it on, he said. That and the third film in Disney's series, "At World's End," are his favorites, the most rich in lines for him to recite when he's Sparrow.

Being a good Capt. Jack isn't as simple as playing dress-up and parroting dialogue, though. Contrary to the claims of the Capt. Jack cosplay community — from which Martinez has caught flack for not being 100-percent accurate to the films — putting a little bit of oneself into Jack is the key to a memorable portrayal, he said.

"Sometimes I think, 'What would Jack say?' But a lot of the other guys are so worried about being perfect and being the actual character you see that they lose all the grasp of being themselves and being real," Martinez said. "So there's a lot of Rick in Jack."

There's some Jack in Rick, too. At Casey Park Elementary, where his children Alex, 8, and Gabrielle, 11, go to school, other students sometimes recognize the captain, reconciling his plain-clothes appearance by telling themselves he's in disguise, Martinez said. During appearances the complete opposite may occur — "It's Johnny Depp," someone will scoff. Martinez is quick to correct them: "No, I'm Capt. Jack."

Martinez picked up those improv skills in acting classes at NYU and in Florida, where he also did some TV extra work. The ability also comes in handy given the gumbo of appearances Martinez makes as Jack. He reads to parents and children at Seymour and other local libraries. He grand-marshals zombie Halloween parades. He brightens the mood at benefits (for which he never charges).

Vin Gleason, director of TheRun4Life.org, began asking Martinez to come to his events, like the Oct. 20 Trick R Trot, because he saw the connection Capt. Jack shares with children firsthand.

"My son met him at Relay for Life and followed him around for hours," Gleason said.

For Martinez, that kind of reaction is the wind in his sails.

"Where else can you go and get paid to be a pirate and have fun?" he said. "It's the ultimate job."

Then there's the mothership Martinez captains in his front yard. At first the Haunted Pirate Ship was smaller, simply a fruit of his love for Halloween. Then children asked to go inside, which gave him the idea to build an even bigger ship. Then the children asked how much it cost to enter the ship, which gave him the idea to charge — but magnanimously.

Ultimately, it was Martinez' wife, Cathy, who suggested making the project a charity vessel for the Calvary Food Pantry.

She wasn't so sure of her husband's high-seas gig at first — especially after he quit his job to do it full-time. But then, like Gleason, she saw it: In her case, the smile Rick brought to a timid child's face by handing him a gold coin, the currency that grants visitors passage through the Haunted Pirate Ship.

"That kid's face lit up like nothing you've ever seen. I carry that image around with me all the time," she said. "(Rick) is like a little kid anyway."

Soon, he aims to bring that kind of smile to scores more children as host of a new Web and cable-access TV show, "The Pirates for Knowledge," which will broadcast a fun, pro-literacy message from places like the Seward House Museum and the Harriet Tubman Home.

"It's like 'Pee-wee's Playhouse,' but I'm the straight man," he said. "We did something naughty to a magical mermaid so she cast us in a bottle."

There's one catch: Martinez won't be Capt. Jack. Because of Disney's ownership of the character, he's molded his maritime talents into a new, original persona: Capt. Richard Crowe, whose avian last name nods to Martinez's hometown. The forecast for the project is already promising: The show recently met its $5,500 Kickstarter fundraising target.

"Kids are going to wind up maybe forgetting about Jack, eventually," Martinez said. "I'd love to be my own pirate."

Where to see Capt. Jack

COST: A canned good for the Calvary Food Pantry

WHAT Hugs for Alijah benefit with music by Chopping Block, a visit from Capt. Jack, a bounce house, face painting, pumpkin painting, food and more

The captain has a famous first mate — for a weekend, at least.

We expect our pirates to be good guys or bad guys.

Haunted houses, costume parties and little chills for the children are among the Halloween events happening in the Cayuga County area this mon…

When Seneca Falls held its first Canal Fest two years ago, little did the village know it was auditioning for another festival.