In 1948, a loose group of affiliated farm-related institutions in New York state joined together to form the Rural Radio Network. The participating institutions included the Grange League Federation; the state Farm Bureau; the state Home Bureau; the state Poultry Council; the state Vegetable Growers Association; the state Horticultural Society; the New York Artificial Breeders’ Cooperative; the Dairymen’s League; and the Empire Livestock Marketing Cooperative. The broadcast area of this new FM radio network — the “RRN” — would eventually cover most of upstate New York.

The six original stations included facilities at Wethersfield, Wyoming County; Bristol Springs, Ontario County; Newfield, Tompkins County; DeRuyter, Madison County; Cherry Valley, Otsego County; and Turin, Lewis County. The plan was to build transmission towers and mini-studios at each station. The broadcast signal would originate out of Ithaca, and subsequently be relayed throughout the network.

The founders had little or no experience in broadcasting, but collectively, they had a deep understanding of farmers and rural communities. They recognized a need for better communication and up-to-the-minute information, as well as interest in cultural and entertainment programming that addressed rural listeners.

To optimize its technical operation, the RRN hired engineering consultants, whose research determined the best technical specifications for FM reception within the RRN listener region. This information would subsequently determine the technical design for the six relay stations.

One of the challenges they encountered involved FM receivers; at the time they were expensive, and technical specifications were not widely standardized. Based on its research, the RRN collaborated with North American Phillips to build a radio specifically geared for the RRN. Marketed as another “farm tool,” the relatively affordable radio was promoted and available through GLF stores and other farm supply outlets.

The unique characteristic of this network was that it was wireless. Programming was relayed tower to tower. At each tower, a facility was built, that included living quarters for the on-site engineer, the electronics required to relay the shows to the next location, weather reporting instruments, and a small studio that could be used to generate local, original programming.

Programming ran the gamut: market reports, gardening, news bulletins, farm-oriented interviews, shows for children, health programs, programs for farm wives, road condition updates and, of course, weather reports. All genres of music were included in a day’s schedule. Everything from country music for square-dancing to a performance by the Chautauqua Symphony would typically be programmed, and often, performed live. The RRN even had a mobile transmitter that could broadcast live Grange events, county fair reports and regional meetings of farm organizations and educational institutions.

Scheduling was timed to when people were most likely to listen, considering their farm duties. Information for working men was scheduled noon to 1 p.m.; women, presumed to be housebound, were the focus of afternoon shows, while programs for children were relegated to an after-school time slot.

Market prices for farm produce needed to be as current as possible; weather reports were local and immediate. Individual weather reports, generated by each network station, were relayed over the entire network, in succession across the region. While not the latest Doppler radar, one could appreciate hearing the station manager/weatherman reporting, “We’ve got some serious fog outside my door this morning in Cherry Valley.”

By 1960, the network was sold and renamed the Northeast Radio Network. Over the years, various owners changed formats; individual stations were renamed, reformatted or simply disappeared.

While unique for its time, the RRN faced some challenges. One problem was the relative expensive cost of their receivers. FM broadcasting and FM radios, at the time, were not widespread, and even though the radio developed by the RRN was cheaper than other radios, the expense of a new radio was either prohibitive, or an amount thrifty farm families opted to decline. Then, increasing competition from television, and other radio networks, eroded the RRN’s impact. And, likely, the steady decline in the number of farms and in the population in rural areas also contributed to the ultimate demise of the RRN.

Today’s media landscape, with constant news updates, is crowded with websites and social media groups minutely focusing on all kinds of topics. In comparison, a little radio network in upstate New York, built by a consortium of organizations serving rural communities, provided those often underserved communities with an important and reliable source of local information, news and cultural programming. It was a neighborly enterprise, undertaken with appreciation and affinity for the people it served. 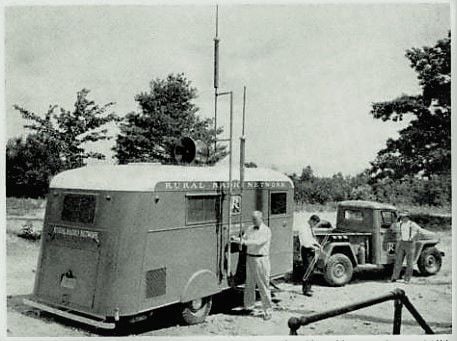