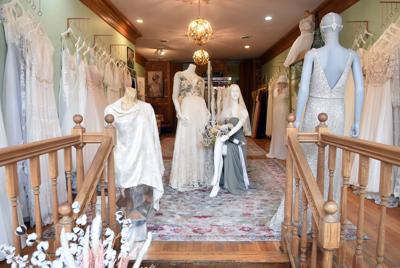 Layne Dann, owner of Gee June Bridal in Skaneateles, said about half of her clients have postponed their weddings due to the coronavirus pandemic. The other half are delaying their decisions until May 15, the day New York state could start allowing regions to reopen.

Of the brides who have postponed their weddings, Dann continued, one group is pushing them back the furthest, generally fall of 2021: nurses, pharmacists, doctors and other health care workers.

"I think they understand we're in this for the long haul," Dann said. "And those of us who make money off events, we're going to be in this for a longer haul than most."

Dann and others who earn their living from weddings and large events said it could indeed be that long before their business is back to normal. And from venues and caterers to DJs and photographers, each of those businesses is already struggling to adapt to a world where gatherings of more than 10 people are ill-advised, if not illegal.

"Weddings have a huge ripple effect economically," said Karen Kuhl, executive director of the Cayuga County Convention and Visitors Bureau. "They will be back, but it'll be a slow road to recovery."

Dann hopes she can reopen her village shop by July for appointments, at least. Until then, she's the only one allowed inside. And it's not the kind of retail business that can be replaced online, she said — brides don't simply walk into Gee June and walk out with dresses. Dann has to alter them, a process that is personal by nature. Though she can consult with her brides remotely, there's no such thing as a "virtual fitting," she joked.

But Dann has seen some brides look to virtual spaces as they try to plan their weddings during a pandemic. They're moving forward with small Zoom, living room or backyard ceremonies on the date they've set, and saving bigger celebrations for whenever it's safe to hold them again. So those brides are working with Dann to create simpler, more casual dresses for the new occasions, she said.

Making those decisions isn't easy for brides and grooms, Dann added. She compared it to the stages of grief: Some may deny the severity of the situation, or think there's a bargain to be struck, before accepting it. She thinks that's particularly true in upstate New York, where the virus hasn't hit as hard as other areas. And most people who plan a wedding are new, she noted, to what can be a complicated, emotionally charged process even without a pandemic.

Those who earn their living from the industry are making the same range of decisions, Dann said. Some venues, for instance, are being proactive about postponing weddings, while others are waiting as little as a week prior. Auburn photographer Emma Sedlak said one of her couples, slated to marry in June, had put off making a decision on their 275-person wedding until this week, when the venue called to say that it was delaying the event instead.

"They were sick over the decision," Sedlak said. "So it was nice knowing they don't have to worry about it anymore."

With weddings, Sedlak said, she's been lucky so far. All of those appointments have been rescheduled, and unlike other photographers she knows, she hasn't been asked for a refund. But most of her other shoots, such as babies and families, have been canceled.

Sedlak also operates a stationery business that designs wedding invitations. And for her, that has yet to suffer much, either, because she only designs invitations for one or two weddings a month.

But it's a different story for the couples, she said. One, marrying in June, has already payed for and received their invitations, but now they're trying to decide whether to send them or print new ones. Sedlak is supposed to meet another couple next week to start the process ahead of a September wedding, but she's been waiting for them to tell her whether they want to proceed. Like Dann, she knows how difficult a time this is for brides and grooms, so she's trying not to bombard them.

Sedlak, who got married in November, also suggests couples take this moment of misfortune to consider what's important at their wedding.

"Realistically, you don't need as many people as you planned on in order to have the best day," she said. "Think of something smaller and more intimate. Smaller is better."

Though she hasn't considered it too closely, safety will be a concern for Sedlak when she shoots her next wedding. When a bride's hair needs fixing, or a boutonniere needs pinning, she's usually the one to do it, she said. Otherwise, she's able to maintain distance from the bridal party and guests — but if she's asked to wear a mask or follow any other guidelines, she'll be happy to comply.

That's also the attitude of Jane Stebbins-Skowron, of local DJ service Goodtime Charlie's Mobile Entertainment. Though she's separated from everyone at a reception in her 4-by-4-foot space, she still plans on wearing a mask and taking any additional precautions that couples request. A seamstress friend has even provided her two tuxedo-themed masks, she said with a laugh.

When she considers the effect the coronavirus pandemic has had on her business, however, Stebbins-Skowron is less cheerful. Along with four wedding postponements, she's seen gigs like the Auburn Kiwanis Club's Memorial Day weekend Duck Derby canceled, and is awaiting word on the Founder's Day car show, graduation parties and more.

"It's completely devastating," she said. "This isn't a hobby, this is an income. This is my job."

Because of the pandemic, Stebbins-Skowron expects to see more outdoor weddings this summer, and maybe even next. For the indoor ones, she wonders whether dance floors might disappear. But no matter what couples do because of the coronavirus, she hopes they're not so scared they don't share their special day with loved ones.

"You can do it in a way that'll allow you to still see them, be with them and still be in safe place," she said. "It is a scary time, but there are ways we can do this and be smart about it."

Celeste and Matthew Johnson were planning a July wedding when the COVID-19 pandemic arrived, a premature objector.

"It's like I'm living in a horrible rerun of 'Footloose.'"