The Schweinfurth Art Center, left, and the Cayuga Museum of History & Art are partnering to create an arts campus that would make the two sites more accessible, create additional outdoor programming space and serve as a more prominent western corridor to downtown Auburn. 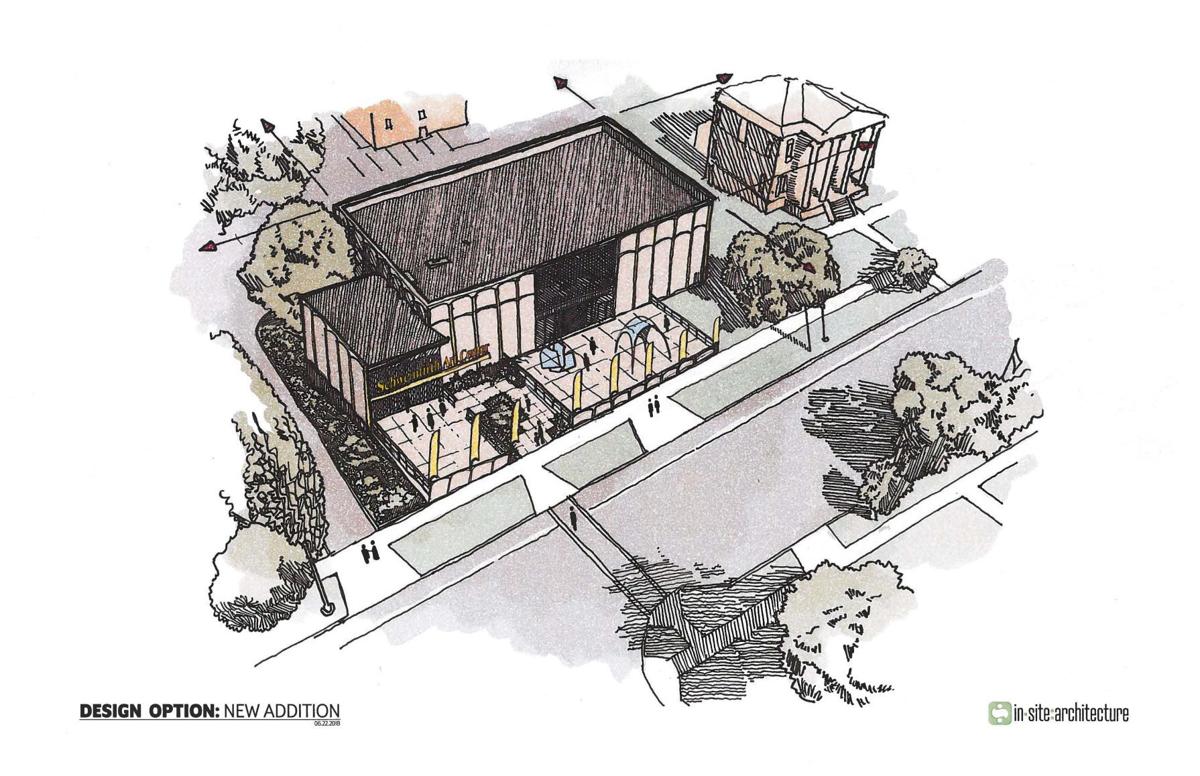 A preliminary concept rendering for the west end arts campus by InSite Architecture.

AUBURN — Two Auburn cultural sites are partnering on a project with goals of curb appeal, accessibility and growth.

The Schweinfurth Art Center and the Cayuga Museum of History & Art are planning to create an arts campus that will visually accentuate the buildings and make it easier for visitors to enter them, as well as open the door to further development like artist housing and additional programming space. The project was included in the city of Auburn's successful 2018 Downtown Revitalization Initiative proposal, putting it on the table for funding as the city works with the state to decide how the $10 million grant will be spent. The art center and museum asked for $1,121,120 in the proposal.

"We're two very different institutions, but we benefit from proximity and we have a lot of overlapping visitors," Lamb said. "So it seemed like a sensible thing."

Gov. Andrew Cuomo came to Auburn less than two weeks ago to announce the city was the latest…

Lamb and McHugh said they decided to pitch the campus project to the city after Councilor Jimmy Giannettino asked for ideas at a meeting of the Historic & Cultural Sites Commission. The timing was perfect, Lamb said: CNY Arts recently hired a master planner to create an arts district in Auburn and other area cities, and the campus "fits in beautifully" with that project. Meanwhile, the center has submitted a Consolidated Funding Application to replace its HVAC system and install one on its second floor, allowing it to expand its Studio Schweinfurth workshop series. And the museum has submitted its own application to hire a preservation architect to devise improvements to the Case Research Lab. Water intrusion and other issues currently prevent programming there, McHugh said.

Those projects share a common goal with the campus, Lamb and McHugh said. It will feature accessible and attractive walkways between the four buildings that comprise it: the art center, the museum, the lab and the Carriage House Theater. Those who park in the lot behind the center sometimes have difficulty finding the door, Lamb said, or they may not even see the museum, McHugh added. All they do see is the unsightly rear of the buildings. But through landscaping, signage and other improvements, the campus will guide those visitors inside in a more efficient and aesthetically pleasing way. There will also be a direct path from the center to the museum's side entrance for people with disabilities, McHugh said. That path currently snakes around much of the property.

The campus will also include more sustainable green parking lots that can host outdoor programming, as well as a plaza space in front of the Schweinfurth with sculptures and seating. And as the timeline continues, the project's components get more ambitious. First, Lamb and McHugh hope to add artist housing either adjoining the campus or in the west end neighborhood. Being able to house artists in residence, visiting lecturers and other creative personalities will widen the scope of programming on the campus, they said. Though they'd like to be able to house at least six to 10 people, Lamb said more capacity would push the center closer to another of its goals: moving its annual "Quilting by the Lake" conference and exhibit from Onondaga Community College to Auburn.

State funds to support creation of Auburn arts district — but what shape should it take?

An arts and entertainment district may soon be established in Auburn. But what should it do?…

The Schweinfurth's plaza space will be built around an addition with a side entrance and an elevator, another part of Lamb's long-term plan. And the elevator will be built to allow for roof access, as the center also hopes to create a rooftop event space. The museum, meanwhile, would like to turn the basement of the Case Research Lab into a cafe accessible from the center or the theater.

However, those plans are subject to the state's Downtown Revitalization Initiative process. Lamb said that if the campus project secures a piece of the grant, any work on it probably wouldn't begin until 2020. For that reason, as well as the uncertainty of further funding and therefore the extent of the project, she and McHugh are reluctant to attach figures to it at this point. Its overall budget is listed as $4,463,623 in the city's proposal, but that could change, they said. They're also unsure how many jobs the project will create, though components like artist housing and a cafe would assuredly require more staff. And they only know the potential is there to "significantly" increase visitorship from the Schweinfurth's annual figure of about 15,000 and the museum's of 8,500.

But Lamb and McHugh are certain that unifying their institutions as an arts campus on Auburn's west end would create a gateway to downtown — and a cultural destination for the region.

"Between these two places, we have history, art, theater, science — right here in one location," McHugh said. "We want to make it easier for other people to know that all of that's here in one spot."

The Schweinfurth Art Center in Auburn announced Wednesday that it has been awarded a $249,616 matching grant to install a new heating, air con…

AUBURN — For the Cayuga Museum of History & Art, a new executive director isn't just a transition. It's part of a greater transformation.

The Schweinfurth Art Center, left, and the Cayuga Museum of History & Art are partnering to create an arts campus that would make the two sites more accessible, create additional outdoor programming space and serve as a more prominent western corridor to downtown Auburn.

A preliminary concept rendering for the west end arts campus by InSite Architecture.