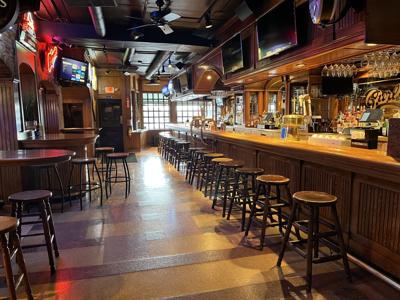 This week, families across the country will take on the challenging task of feeding and entertaining large numbers of guests who range from the easygoing and grateful to the argumentative and nitpicky.

While most families will do that on Thanksgiving, Joe and Jessica Smith will do that the day before. Because that Wednesday, Nov. 23, is the day they will reopen Curley's Restaurant in Auburn.

"We know this is not going to be like a normal opening," Joe Smith told The Citizen on Thursday. "People are already kicking the doors down trying to get into this place."

The Smiths, of Throop, will open the pine green doors of Curley's to the public that day for the first time since the beginning of the COVID-19 pandemic in March 2020. The popular restaurant's owners since 1933, the Dello Stritto family, closed it that month due to state guidance but never reopened. They put Curley's on the market the next year, and the Smiths bought it for $400,000 in July.

Joe said he and his wife remain in contact with the family regularly. They like seeing the improvements to the 8,800-square-foot restaurant overseen by him and his other business, Lakeside Construction. Those improvements include retouching the green sign painted on the south wall of the brick restaurant, which features an image of namesake founder Angelo "Curley" Dello Stritto.

"We didn't change it, and I don't think anyone wanted Curley's to go to someone who'd change it," Joe said. "It's such a staple to everyone. It means so much and no one wanted to see it go."

The Smiths have also repaired the roof and refurbished the floors, walls and furniture in the four months since buying Curley's. Their goal of reopening the restaurant for the holiday season pushed some of the more aesthetic work back until spring, Joe said, but mechanical work is complete. The two three-bedroom apartments on the upper floors will later be renovated for rental or Airbnb.

WHEN: Opens at 11 a.m. every day except Tuesdays beginning Nov. 23; kitchen and bar close at 9 a.m. Sundays and Mondays; kitchen closes at 9 p.m. and bar at midnight Wednesdays through Saturdays

The biggest change at the restaurant so far, Joe said, is the kitchen. It's been "completely redone" with new equipment, partly to launch a new pizzeria business. Customers will be able to grab a slice to eat at the restaurant or to go, as well as wings, garlic knots and more. In addition to the pizzeria menu is a tavern one with burgers, subs and other traditional Curley's selections.

The menu is big, Joe said, because Curley's is. It also boasts the restaurant's signature breaded chicken and jojo potato fries recipes, which the Smiths bought from the Dello Strittos. On the drink side, 12 new draught beer lines and wine slushy machines have been installed, and specials include a Reese's Manhattan, a strawberry-covered chocolate martini and a s'mores martini.

"We plan on it being very busy, so we didn't want a huge cocktail menu," Jessica said. "We feel honored to even own the place. We're happy to open the doors and bring it back to life."

Jessica will work at the restaurant full-time with a staff of 35 to 40, some of whom worked at Curley's under the Dello Strittos. It's the first restaurant for the Smiths, Joe said. He was worried their lack of experience would lead the community to reject them, but instead they've been embraced. Updates on the restaurant on its Facebook page have been met with overwhelmingly positive responses.

The Smiths had been looking to get into the restaurant business when Curley's went on the market. Though it was bigger than they imagined their first restaurant being, they bought the historic Auburn one for a few reasons. Joe felt he had the resources to take care of the "beautiful" woodwork and other craftsmanship inside, he said, and the business model was the kind he wanted to have.

"Every time I go out I like bar food," he said. "It's always the best food, those little hole-in-the-wall bars with a little kitchen doing home-cooked meals."

Another reason the Smiths bought Curley's, they said, is family. Like the one that owned and operated the restaurant for nearly a century, they hope to pass it on to their children, Gionni and Vinnie.

"We want this to be family-oriented, a place where people can bring their children," Jessica said. "And we want our boys to be a very big part of this. It's for them."

Joe and Jessica Smith, of Throop, opened the pine green doors of Curley's to the public during lunch hour Wednesday for the first time since t…

'Gaslighting' Is Merriam-Webster's 2022 Word of the Year

'Gaslighting' Is Merriam-Webster's 2022 Word of the Year

Hate eating leftovers? You're not alone

Hate eating leftovers? You're not alone

What is 'junk sleep' and are you experiencing it?

What is 'junk sleep' and are you experiencing it?