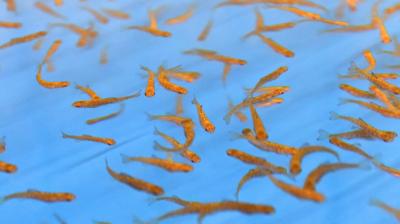 AUBURN — Soon, the salmon you eat could be from Auburn.

Finger Lakes Fish, a new aquaculture business, is getting off the ground inside a 43,000-square-foot facility on Technology Park Boulevard. Founded by CEO Ed Heslop, of Aurora, the business raises coho salmon and sells them to high-end restaurants and grocers under the LocalCoho brand name. The Auburn facility is the first of a dozen Finger Lakes Fish plans to open across the country.

The Citizen toured the facility Thursday with Heslop and general manager Phil Gibson. It smelled like the seaside, and required a disinfecting foot bath to enter.

There were about 100,000 fish inside the facility. About 10,000 of them were swimming in a raceway, a tank of oxygenated water 6 feet deep, 16 feet wide and 80 feet long. A second raceway of that size was empty, undergoing maintenance. And the business plans to build seven more of those raceways to reach its ultimate production goal: 2,000 fish a week, or 450 tons a year.

Gibson said the facility should be completely built out within six months. Finger Lakes Fish also plans to add three or four people to its staff of seven full-time and two part-time employees.

In another part of the facility, smaller cohos flittered in pools atop specialized barrels, while bigger ones filled smaller raceways. The fish, all female, take 18 months to reach market size, which is 6 or 7 pounds. They arrive as eggs from a hatchery and ship out on ice after being euthanized with carbon dioxide. As they grow during those 18 months, they travel between three or four tanks.

Other equipment inside the facility recycles 95% of its water. One raceway holds 67,000 gallons, so recycling is crucial to Finger Lakes Fish, Gibson said. It uses municipal water, which it then dechlorinates, because the cohos can't tolerate the chemical. Once used, the water is sent through a filter that separates any impurities, as well as fish waste. Soluble impurities are then removed using spongy black pieces of plastic the size of dice. After being disinfected with ultraviolet light, the water is reused. And the amount of waste produced is "relatively insignificant," Heslop said.

From the way the water is filtered to the way the fish are raised, Finger Lakes Fish operates under Best Aquaculture Practices certification. It is the first recirculating system coho salmon farm in the world to be awarded the certification, which is based on food safety, animal welfare and environmental sustainability. The business has also obtained Safe Quality Food certification, Heslop said.

"This puts us at the forefront of food safety and sustainability," he said.

The Aurora entrepreneur, who has 30 years of experience in green technology and sustainability, had been researching the fish market and aquaculture when he called Gibson, a 30-year veteran of the seafood industry. They saw the same opportunity in land-based salmon farming. The U.S. imported 1.2 billion pounds of the fish last year, Gibson said, so it traveled thousands of miles before being eaten weeks or months later. And as more and more Americans look for healthy food that's local and sustainable, the business model of Finger Lakes Fish becomes more and more viable.

"This allows us to provide the freshest fish possible to the consumer," Gibson said. "It's a truly sustainable farm environment."

The business raised private equity from across the U.S., Europe and South America, Heslop said. It had its first coho in water at a King Ferry barn in April 2018. After outgrowing that space, Finger Lakes Fish purchased the Technology Park building (formerly Lexi Interiors) for $1.35 million and began moving in there in June. The filtration system will be relocated to new additions to the facility.

The Auburn facility is a proof of concept for the others the business plans to build, Gibson said. A facility supplies fish within a 300-mile radius, so the others will be placed near population centers, not necessarily in them. For instance, Heslop said, LocalCoho can be supplied from Auburn to Buffalo, Binghamton, Albany and — if the demand can be met — New York City.

Though Finger Lakes Fish will expand its production, it does not plan to expand its product beyond LocalCoho. The business's aquaculture operation is so sophisticated and costly that raising lesser-value fish like tilapia and even Atlantic salmon wouldn't be worthwhile, Gibson said. (He and Heslop did not allow any panoramic photos of their facility due to its proprietary technology.)

Coho salmon, however, has a cleaner, less "fishy" taste and nicer mouthfeel than Atlantic, and is higher in healthy fat content, Gibson said. It's also sushi-grade, and indeed, it's served as a raw delicacy at the restaurants Finger Lakes Fish supplies. It currently has two restaurant clients: Glenora Wine Cellars in Dundee and Graft Wine + Cider Bar in Watkins Glen. It also has agreements with a couple "upper-tier" grocers, Gibson said. But as the business grows, the number of restaurants and grocers working with LocalCoho will do the same.

There's no organic standard for fish in the U.S., Gibson said, so LocalCoho can't be marketed as such. But neither the eggs nor the fish are genetically modified, he continued, making the product all-natural. The salmon's feed, which is delivered by hand, does contain some GMOs, namely corn and soybeans. But when non-GMO feed becomes more available, the business would like to use it. Just as Finger Lakes Fish is conscious of the time and resources it takes to transport fish from farm to table, Heslop said, it's conscious of exactly what is fed to them.