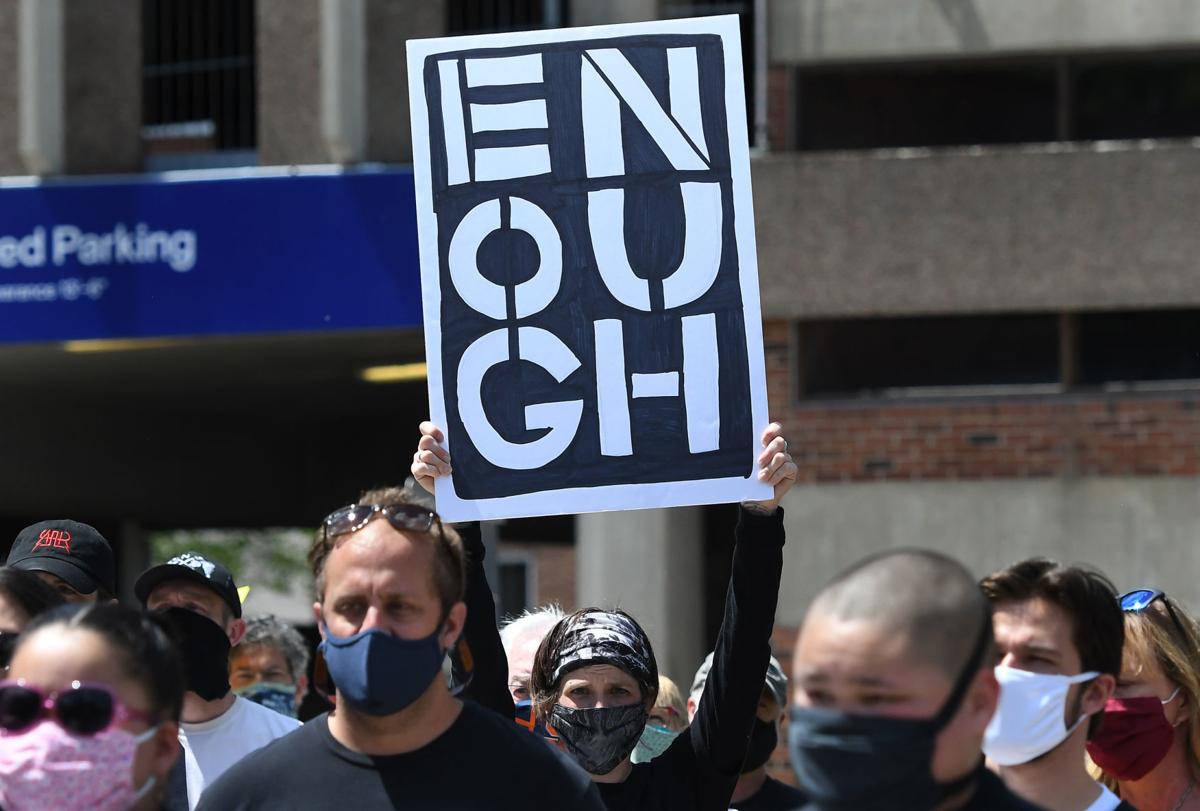 A protester holds up a sign during the demonstration of solidarity for racial justice at the NYS Equal Rights Heritage Center in Auburn June 6.

The U.S. Census Bureau collects data on race by asking respondents to self-categorize into five groups: white, Black, American Indian, Asian and Pacific Islander. The evidence is clear that these categories represent nothing more than a human invention based on superficial but highly visible physical differences such as skin and hair color, and geographical origin. In reality, genetic differences that underlie important mental, emotional and behavioral factors are greater within groups than between groups.

There is consensus regarding the origin of humankind, whether we take the story of Adam and Eve as metaphor for our evolutionary past, or more literally, we are one family descended from common ancestors with only minor variations between groups.

Although we now know that people from these different categories called races become essentially alike when they are in the same cultural environment, it is understandable that when Europeans first appeared in Africa, both Africans and Europeans thought the other something quite different. Here is an account from oral tradition from the Congo of central Africa.

“Our fathers were living comfortably. Suddenly they saw a big boat rising out of the great ocean. This boat had wings all white, sparkling like knives. White men came out of the water and spoke words which no one understood. Our ancestors took fright; they said that these were vumbi, spirits returned from the dead. They pushed them back into the ocean with volleys of arrows. But the vumbi spat fire with a noise of thunder. Many men were killed.”

Europeans viewed Africans as an inferior race, or as not quite human. While Africans came to understand that Europeans were human after all and had to be dealt with as such, the European stereotype of Africans became established and grew in Europe and the New World into a justification for exploitation and slavery. Over 300 years later, during the American Civil War, the cornerstone of the Confederacy, according to its vice president, “rests upon the great truth that the Negro is not equal to the white man, that slavery subordination to the superior race is his natural and normal condition.”

In the United States nearly 100 years later, all major institutions were still segregated, including housing, education, public transportation, the military and professional sports. There have been multiple attempts at correction, including the civil rights advances of the 1940s, '50s and '60s, and more recent political gains. But the video of the death of George Floyd at the hands of a police officer has struck a nerve, and awakened an awareness that there is still a long way to go.

This awakening has mostly focused on inequality in the justice system. But multiple sources of information, from personal experiences to statistical analysis, reveal a major contrast between the American experience for people of color compared to the rest of us.

Social scientists have attempted to understand how racism has remained so entrenched. One explanation is referred to as white privilege, such that people with light skin possess an invisible package of unearned assets that they are motivated to maintain. These are less obvious but similar benefits to those formerly enjoyed by slave owners. The game of life is played with rules that favor one group over another, resulting in the out-group living in inferior housing, attending inferior schools, dying younger and being way more likely to be imprisoned. These disadvantages negatively affect behavior so that victims of racism are then seen as having themselves to blame.

Psychologists have tried to explain why some individuals display more racist attitudes than others. There is evidence that some of us display hostility toward people we perceive as different in order to defend against feelings of inadequacy, insecurity and anxiety. Having someone to look down upon can sooth the pain of self-doubt. There is a strong correlation between membership in hate groups and psychological issues of these kinds.

The events of recent weeks reveal a major shift in attitude among Americans. There is a growing understanding that our history reveals that the bogus concept of race has been used for centuries to justify and perpetuate systematic injustice. Even though some of the excesses of recent demonstrations can frighten us, about three-quarters of Americans support the overall goals of demonstrators.

We can hope that this new consensus can begin to heal the stark political and cultural divide that is so wide in our public discourse that even fighting the common enemy of a deadly pandemic has become a contentious political issue. We shall see.

Dr. Victor Garlock holds a Ph.D. in psychology and is the author of "Your Genius Within: Sleep, Dream Interpretation & Hypnosis." He was a professor of psychology at Cayuga Community College for over 30 years. He currently is offering individual hypnosis sessions as well as personal counseling at The Center, a holistic health center and spa located in Auburn. For more information, call (315) 704-0319 or visit thecenter4wellness.com.

Look back: Family jam in Conquest

A protester holds up a sign during the demonstration of solidarity for racial justice at the NYS Equal Rights Heritage Center in Auburn June 6.