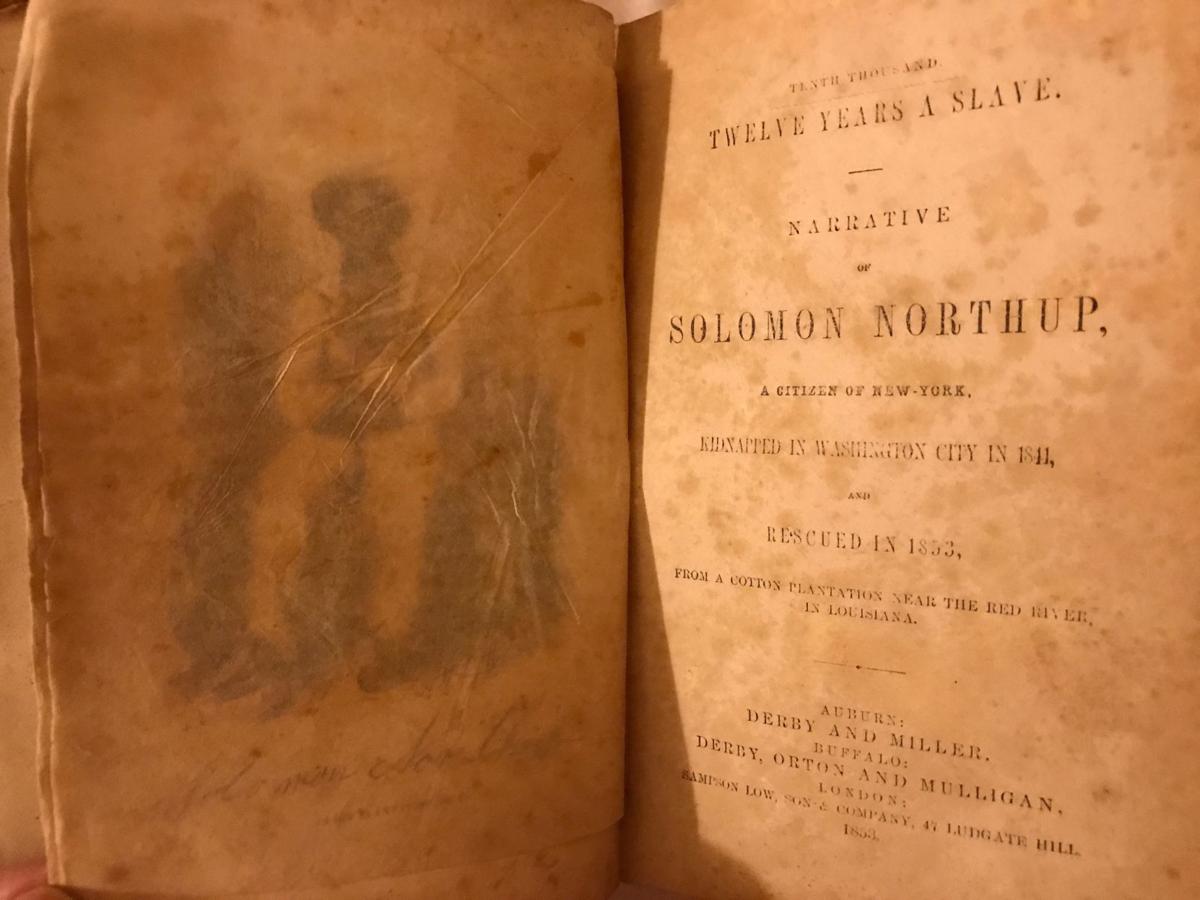 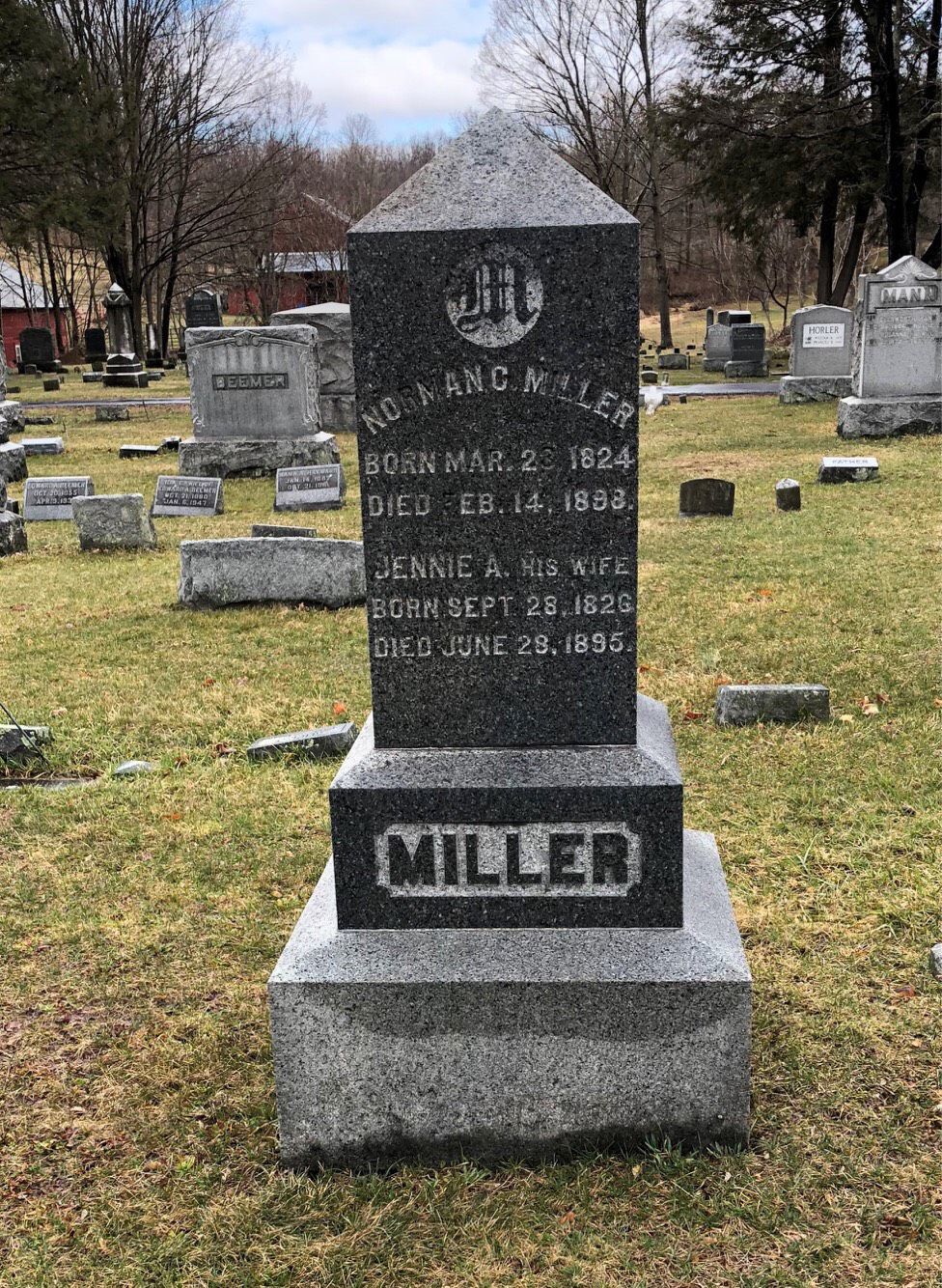 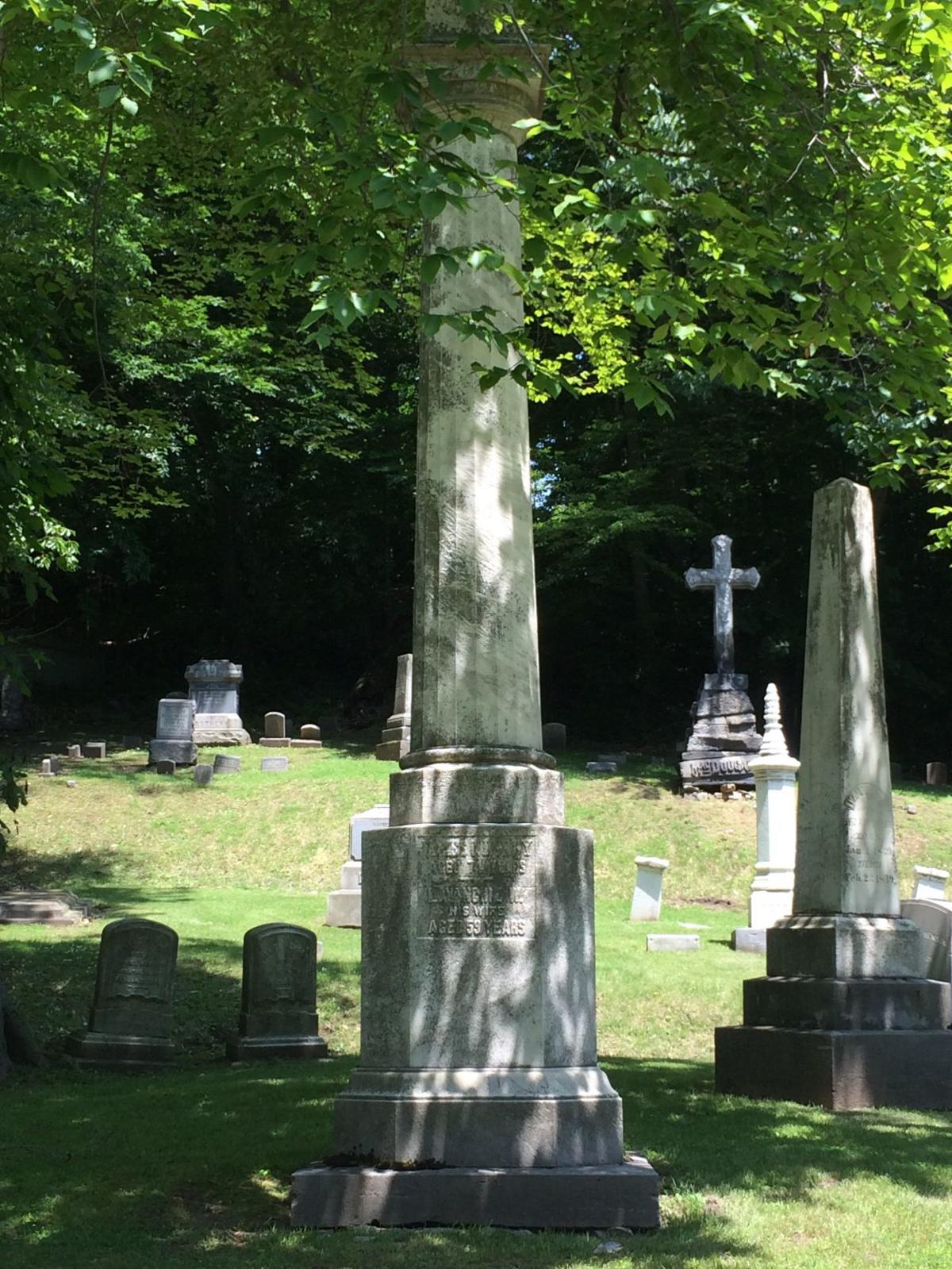 The headstone of James C. Derby's grave at Fort Hill Cemetery in Auburn. 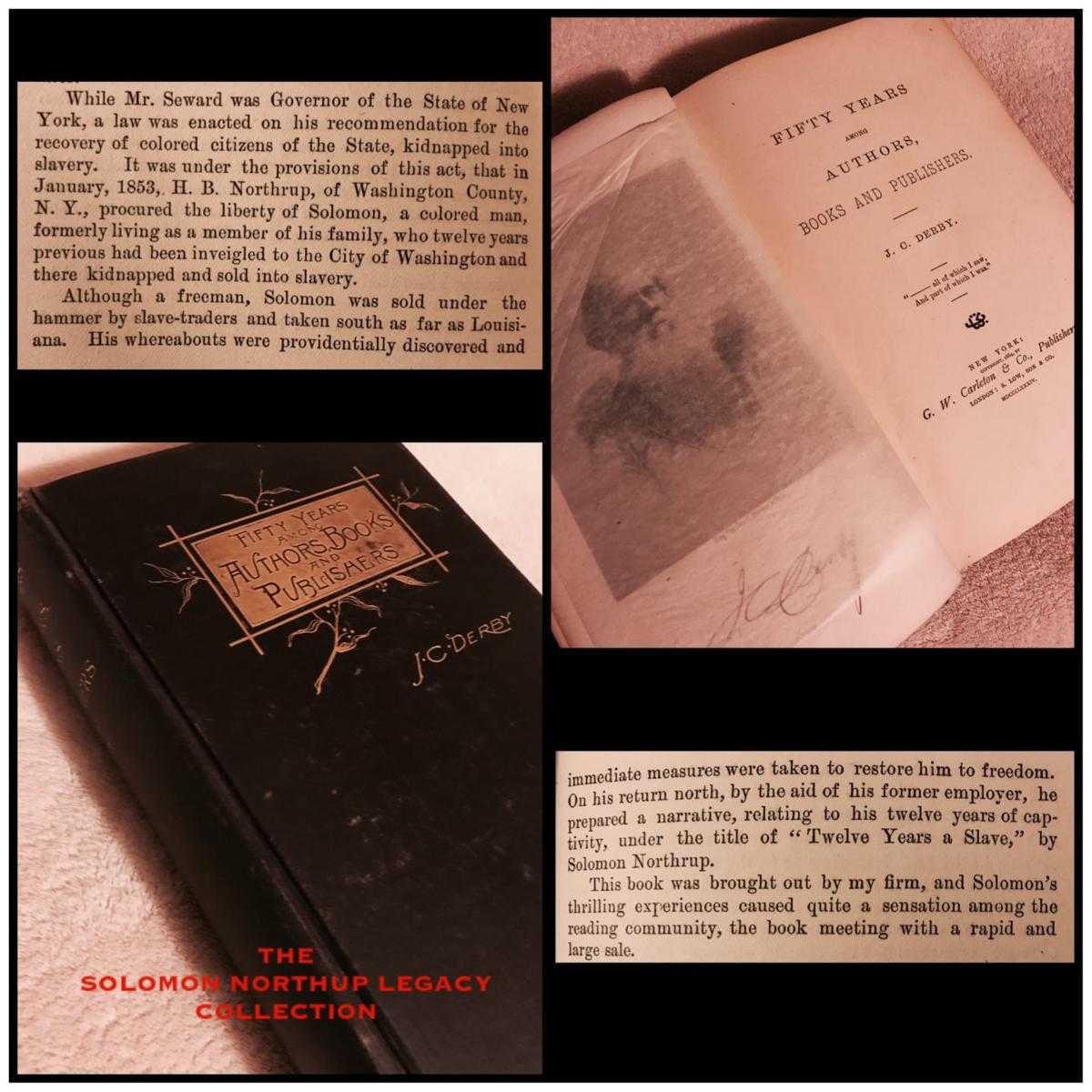 James C. Derby reflect on publishing "Twelve Years a Slave" in "Fifty Years Among Authors, Books and Publishers," published in 1884.

The city of Auburn is situated along the eastern shore of Cayuga Lake in the Finger Lakes region of New York. Once a hotbed of abolitionist activity, historical figures such as William H. Seward, Harriet Tubman, Martha Coffin Wright and the Rev. Henry Fowler are but a select few who made this small city their home in the 19th century. Solomon Northup was an African-American carpenter and farmer who utilized venues in Cayuga County to speak on abolitionist platforms, sharing his reverse account as a free citizen who was kidnapped, drugged and sold into slavery for nearly 12 years in Louisiana. He arrived home in January 1853 to Glens Falls, and an opportunity to pen his story that would lead to Auburn in July.

One of the great stories rooted in History’s Hometown is that of publishing. Once the leading publishing firm in the county during the mid-19th century, Derby, Miller & Co. Booksellers, Stationers and Publishers was a flourishing business run by James C. Derby and Norman C. Miller from their Genesee Street storefront opposite the Western Exchange Hotel, the present location of the Auburn Public Theater. The publishing business at large in Cayuga County had peaked between 1848 and 1856. The residents of the day were responsible for establishing the industry and publishing trade, which shaped the future of Auburn, as evident 170 years later.

During Derby & Miller’s duration from March 1848 to December 1853, the internal partnership reorganized several times to include local Auburnians James B. Thomson, Elliot G. Storke and Capt. Charles F. Coffin, as well as Sennett resident Edward Munson. Founding partner James Derby would become a notable citizen during his lifetime spent in Auburn from the young age of 14 to 35. During his career, Derby held such positions as deacon and trustee at Second Presbyterian Church (now Westminster Presbyterian Church), county treasurer, a trustee of Fort Hill Cemetery, librarian of the U.S. Department of State and U.S. despatch agent at New York at the 1867 Paris Exposition. Mr. Derby made many friends afar and amongst his local community, including lifelong friend William H. Seward. In December 1853, Derby exited the firm and moved to New York City. The Derbys held permanent residence in New York. In 1892, Derby was buried at Fort Hill Cemetery amongst family and along with former business partners Elliot G. Storke, Capt. Charles F. Coffin, friend William H. Seward and artist Frederick M. Coffin.

Norman C. Miller was a clerk in Derby’s first store, J.C. Derby & Co., from 1846 until Derby offered him a partnership opportunity in March 1848. It was Derby himself who believed in his trusted clerk’s abilities to manage the accounting and manufactory ends of the business. After Miller accepted Derby’s offer to become a general partner, the two men conducted business as Derby, Miller & Co. Norman arrived at Auburn in the 1840s and, like his publishing partner, was a member of the Second Presbyterian Church. He married in February 1850 and a few months later, Derby, Miller & Co. had expanded and reorganized partnership, initiating a change in the firm’s name to Derby & Miller and again in 1853 to Derby & Miller Auburn.

The year 1853 was a peak year of publishing for Derby & Miller in Auburn, and the year when Solomon Northup’s account of slavery would lead to the publisher. Immediately upon return to New York, Solomon recounted his story. In April 1853, he forfeited all rights to his story and Derby & Miller entered into copyright the recorded title of Northup’s forthcoming slave narrative. Former third mayor of Auburn Aurelian Conkling became clerk of the Northern District Court in Buffalo where the copyright was entered; his signature adorns the copyright document. Mentions in the trades noted "Twelve Years A Slave" "now in process." Between February and June 1853, Solomon penned his story, while renowned engraver Nathaniel Orr was commissioned to engrave the illustrations completed by local Sennett artist Frederick M. Coffin. During this time, Derby & Miller sought London-based publisher Sampson, Low and Sons to distribute the narrative abroad. In June, the London firm published Northup’s story without the unfinished illustration plates. One month later, on July 15, "Twelve Years A Slave" was "now ready" with advanced sales of 10,000 copies. James Derby remarked in his 1884 biography, “This book was brought out by my firm, and Solomon’s thrilling experiences caused quite a sensation among the reading community, the book meeting with a rapid and large sale.”

With James Derby’s exit in December 1853, Derby & Miller was extinct. Norman Miller would embrace this crossroads to partner with William Orton and Eugene Mulligan, establishing Miller, Orton & Mulligan, the successor firm. In addition, they would open a storefront for stereotyping, printing and binding at 6 State St. In 1857, Miller, Orton & Mulligan succumbed to mismanagement of finances, causing the firm to dissolve. Norman and his wife moved to New York City, where he continued to work in the trade and resided on a New Jersey fruit farm. Norman Charles Miller is buried at Fairview Cemetery in Wantage, New Jersey.

How Oscar favorite '12 Years a Slave' came from Auburn

For the second year in a row, the frontrunner for the Best Picture Oscar has roots in Auburn.

We would also like to thank the many individuals and organizations who have assisted in the ongoing research for this project. And we wish to thank our sponsors for their support: A.T. Walley & Co., the city of Auburn, Hilton Garden Inn of Auburn, Penguin Random House USA and the Auburn Wegmans.

Melissa Howell and Irene Northrup-Zahos are descendants of Solomon Northup and organizers of a project to honor him on the 165th anniversary of his freedom after being kidnapped and sold into slavery.

AUBURN — A historic marker dedication ceremony to honor the leading 19th-century publisher in Cayuga County, Derby and Miller Co., on the 165t…

Governor of Florida says if Walmart can open, so can schools

Governor of Florida says if Walmart can open, so can schools

The headstone of James C. Derby's grave at Fort Hill Cemetery in Auburn.

James C. Derby reflect on publishing "Twelve Years a Slave" in "Fifty Years Among Authors, Books and Publishers," published in 1884.