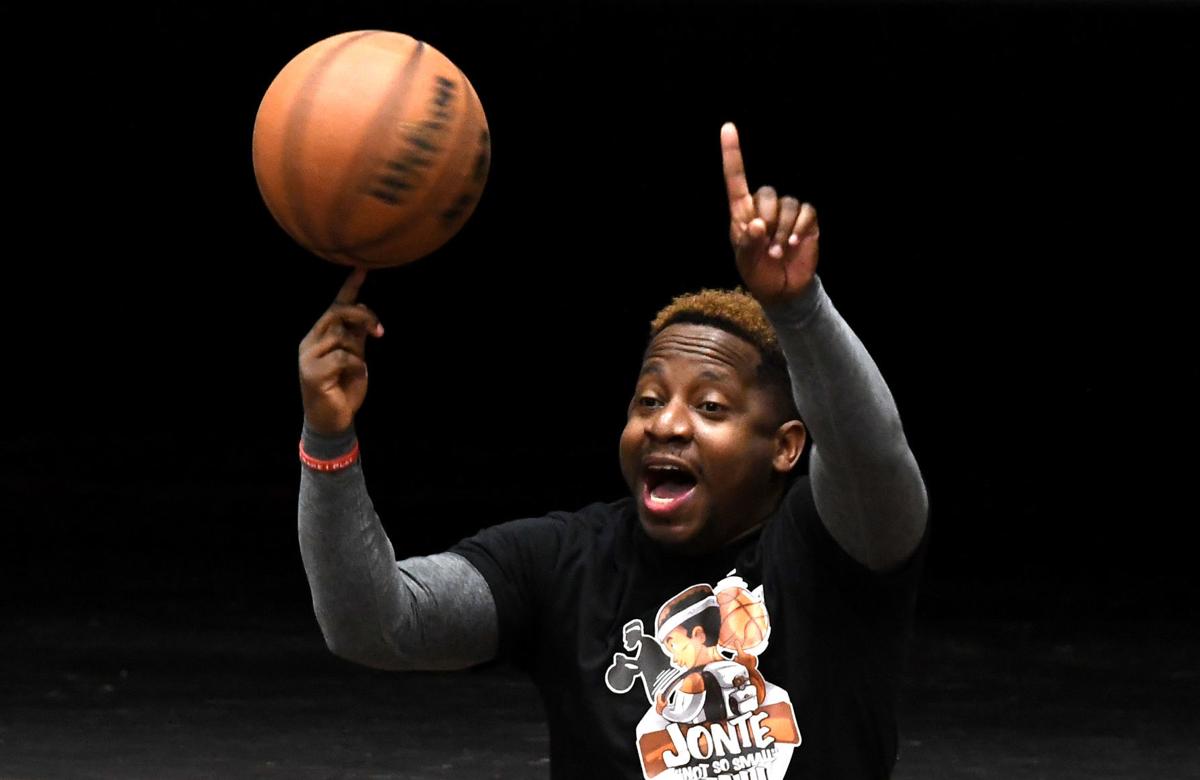 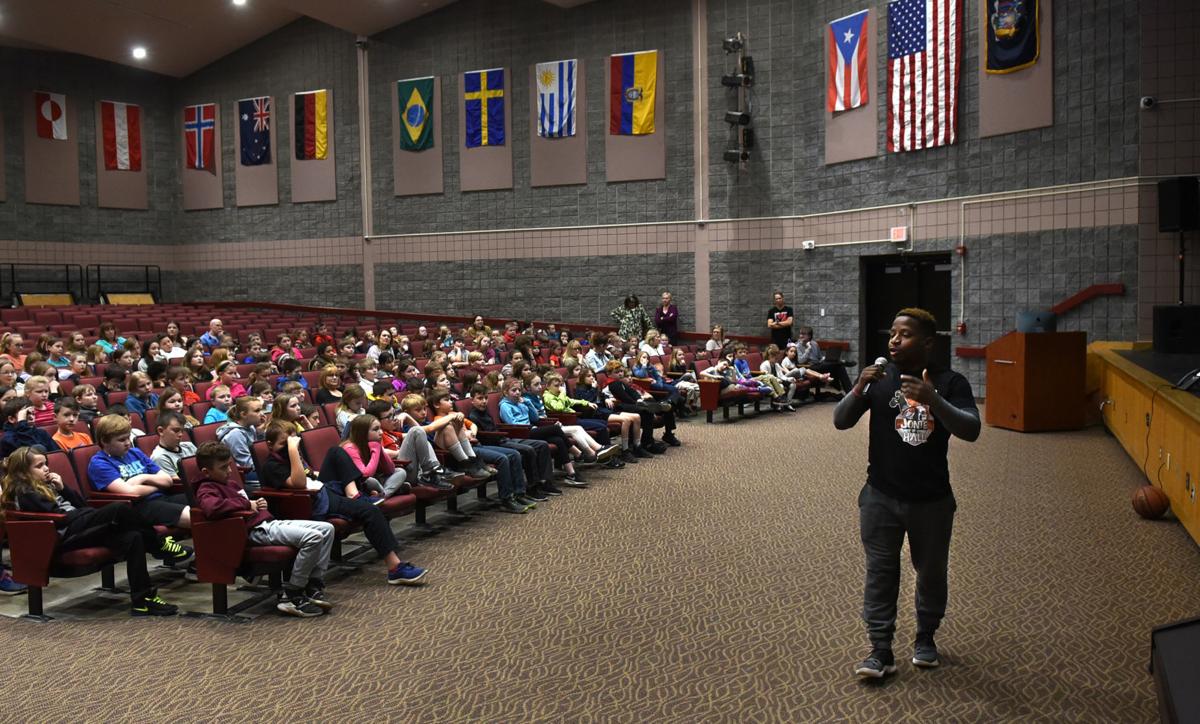 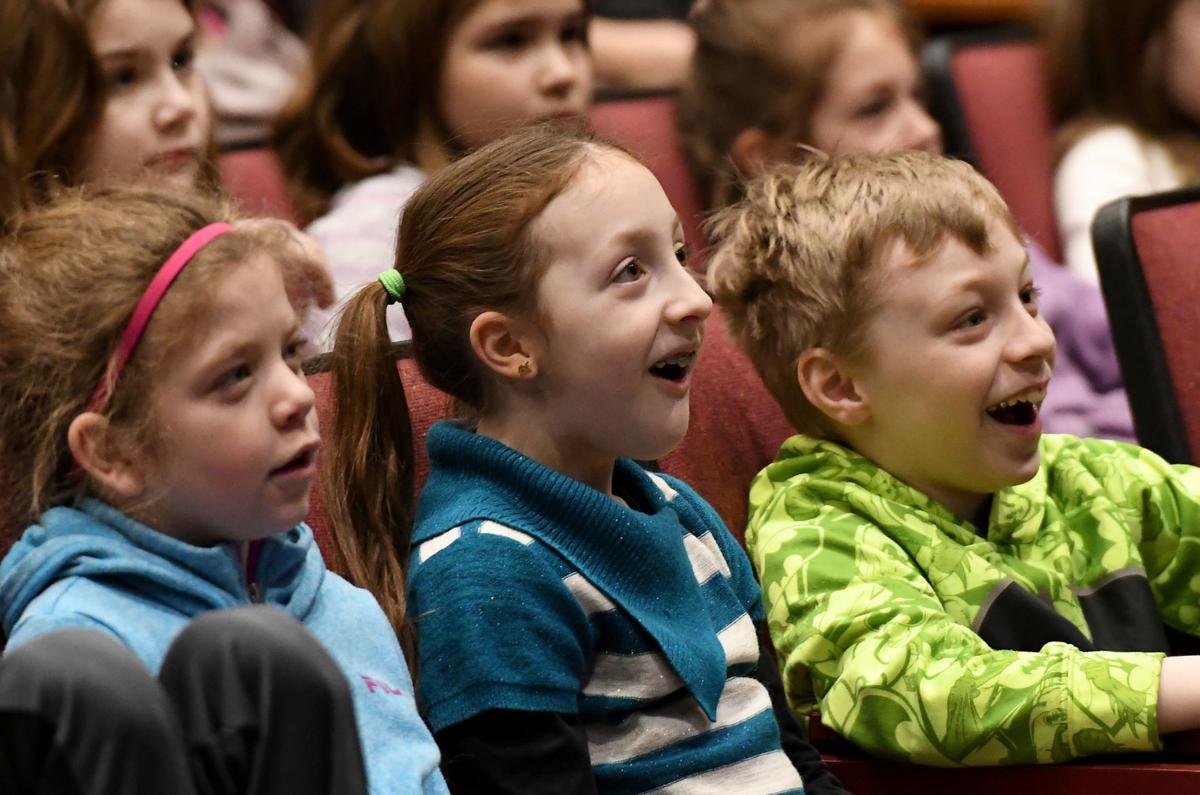 Port Byron student Brad Kurtz didn't think being a basketball and baseball player was possible until he saw a presentation by retired Harlem Globetrotter Jonte "Not So Small" Hall.

Around 200 elementary students heard Hall talk about the importance of pursuing one's dreams in the auditorium of Dana L. West Jr.-Sr. High School April 10. Hall was there as a speaker with the anti-bullying organization Champion of Choices, which sends speakers to schools in hopes of inspiring students. Hall addressed several Cayuga County-area schools and community centers that week.

With hundreds of young hands clapping to a hip-hop song, Hall dazzled students at the beginning of the presentation with basketball tricks, moving swiftly across the floor as he manipulated the ball with ease. After his tricks were done, Hall talked about being the shortest player in Globetrotters history at 5 feet, 2 inches, which earned him the nickname "Too Tall."

Despite his height, though, Hall's professional basketball ambitions didn't waver from the time he was a child. With a constant smile on his face as a legion of eyes focused on him, he said he received his first basketball at age 6, and brought it everywhere from supermarkets to toy stores. He said he turned down chances to do and sell drugs while growing up in Baltimore. And though he heard a barrage of jokes about his height and not getting recruited for basketball out of high school, he never gave up, he said.

Hall attended community college for a year, he said, but dropped out to take care of his mother, earning money as a janitor. Eventually, he emailed the Washington Generals, the Globetrotters' opponents, and played for them for 1.5 years before joining the Globetrotters, traveling to all 50 states and around the world with the famous exhibition team until earlier this year, he said.

"You can do anything you put your mind to. But first, you've got to get good grades, you have to listen to your teachers, of course, and listen to your parents," Hall said. "And strive in your craft, what you're trying to accomplish."

Hall said bullying was an important topic for him, as he weathered insults when he was younger. He approached various children in the audience, who talked about what they do if they or someone else is being bullied. Other parts of his presentation included showing students and staff how to perform different basketball tricks. At one point, he got A.A. Gates Elementary School Principal Julie Podolak to spin a basketball on one finger.

After his talk was finished, Hall took the time to high-five, speak with and trade dance moves with students. Once the children cleared the room, Hall said he felt blessed to interact with young hearts and minds.

"You never know what a kid's going through at home. They could be going through anything, so to get an opportunity to meet somebody who played professionally for a world-famous team and travel the world, I gave them hope," Hall said. "I think I gave a lot of kids hope today."

Micheal Henty, executive director of Champion of Choices, said after the presentation that Hall started with the organization earlier that week. He also gave presentations at St. Joseph School, Owasco Elementary School and the Booker T. Washington Community Center in Auburn, and was set to speak at the Jordan-Elbridge Central School District later that day.

Champion of Choices was founded by author and former World Wrestling Entertainment performer Marc Mero. Mero, who spoke at Port Byron and other local districts last month, has given presentations all over the world. Though Hall's are geared toward elementary students, Mero talks to middle and high school students about more mature subjects, such as substance abuse, teen suicide and campus violence, Henty said.

Henty, who founded the Auburn-area nonprofit Champions for Life, became the executive director of Champion of Choices in September. He said Hall is "the perfect person to do our elementary program." Hall, fellow elementary school presenter Meleeke Jones and speaker Makaila Nichols have joined Mero on the Champions of Choices roster in recent months to help ensure the group's message continues beyond Mero, Henty said.

Port Byron student Meggy McNally said after Hall's presentation that she loved having the former Globetrotter in the school.

"I think he was really inspiring," said McNally, 10. "I think that he is really cool and he's a really, really good basketball player."

When it comes to emergency veterinary care, location means a lot.

Here's how to get your free home COVID test kits

Home COVID tests are now available at no cost to most Americans, as part of the Biden administration's effort to increase testing around the United States.

A couple years ago, Jane Stebbins-Skowron would DJ a monthly birthday party for the children at the Auburn Rescue Mission's housing complex on…

When Dr. Jennifer Hostetler began searching for a veterinary practice to buy, she had two conditions: She wanted it to be in decent shape, and…

Lincoln: Love, stubbornness and support are keys to long marriage

2021 was not a good year for many reasons, the most obvious being COVID-19! We all hope and pray that 2022 will end up with that terrible curs…

Watch Now: The most expensive places to live in the US

Watch Now: States with the most distracted teen drivers

Watch Now: States with the most distracted teen drivers