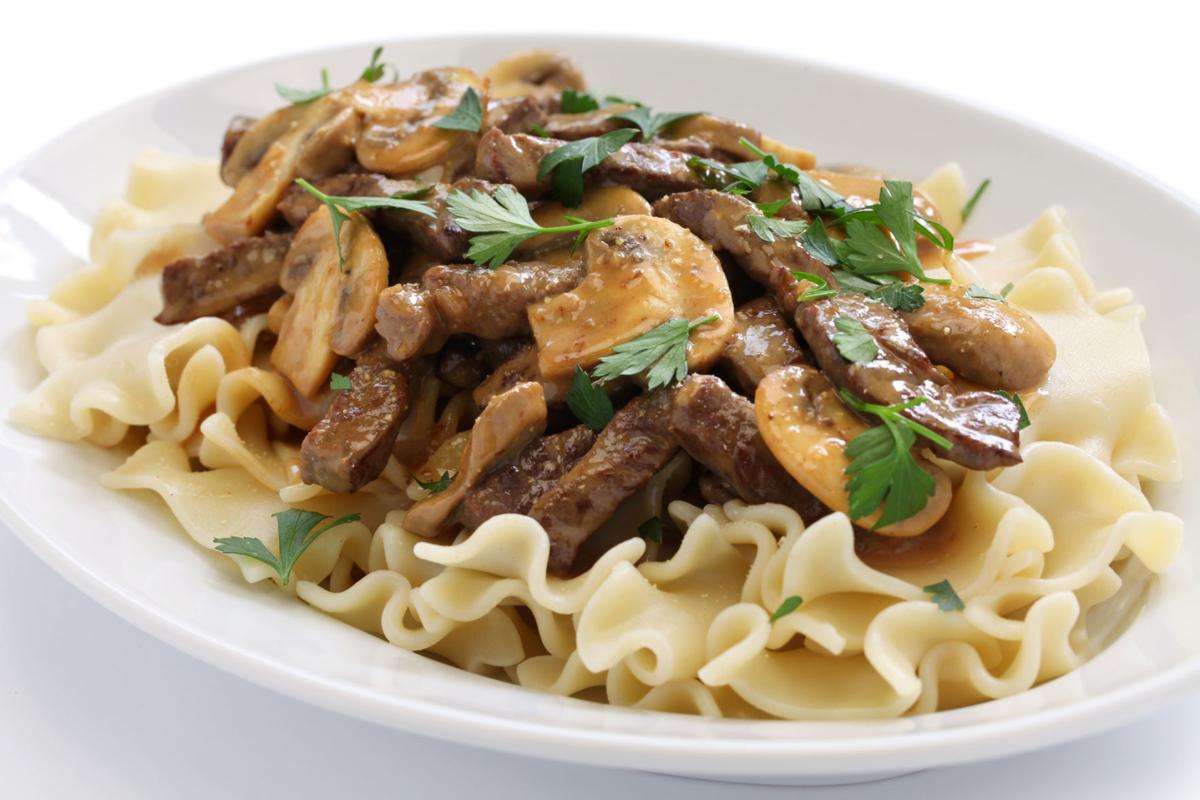 A woman from Sweden who was a friend and later became an outstanding employee of mine made the best Swedish meatballs ever! I loved them so much, I asked her to teach me how to make them for my family. I have adapted the recipe a little, so I now make beef stroganoff with the same basics, and it is one of our favorite dishes. The thing to remember when adding sour cream to any cooked recipe is to not allow it to boil or get overheated. Usually, that means to add it toward the end of the cooking process and either completely taking it off the heat or watching it very carefully so it does not get even close to the boiling point. Basically, just stir it into the pot/pan that is already hot and allow it to come to the same temperature as the rest of the mixture. Then serve immediately. We have a growing teenager, who on top of having a normal young boy’s healthy appetite, is one of the top runners in the state and typically runs 70 to 80 miles a week while training with his cross-country team. So we always have to serve a starch, such as potatoes, pasta, rice or lots of bread! Egg noodles are the perfect complement to the meat in this entree.

I always make extra so we have leftovers that only need to be nuked until hot to enjoy it all over again, without doing the work of making the dish from scratch. This dish lends itself easily for that purpose. We hope you enjoy my variation of cooking beef as much as we do!

If using fresh mushrooms, wash and clean first. Allow to dry completely, then slice, sauté in generous amount of olive oil and set aside, including sauce. If using canned mushrooms, drain first. Cook egg noodles (reserving some of the cooking water to add to the sauce if sauce becomes too thick) according to directions on the box while doing the following: In a skillet, melt a quarter cup of butter over medium heat and sauté onions until tender. Remove and set aside. Dredge meat in flour. Melt remaining butter and brown meat on all sides. Deglaze sauté pan with broth, then add basil, salt and pepper, mushrooms, Worcestershire sauce and onions. Cook until mixture thickens, about five minutes. Just before serving, stir in sour cream. Heat through, but do not allow to boil. Pour mixture over egg noodles and enjoy!

Bob Leonardi was born and raised in Weedsport, but spent summers on Owasco Lake in Auburn. After graduating from St. Lawrence University, where he cooked for other students to earn extra money, he moved to Florida and started a fine wine and gourmet food store. In a matter of a few years he added a restaurant, upscale catering and event planning to his business, which he ran in Fort Lauderdale for 15 years. He bought and restored Green Shutters restaurant in 1999, running it for 12 years. He now writes for a society newspaper as a restaurant critic in Florida and has written his column for The Citizen since 2005. He continues his catering and event planning business while living in Boca Raton with his wife, Veronica, and son Geoffrey during the winter months. He can be reached by contacting The Citizen or via email at raleonardi@roadrunner.com.

But in this time of social distancing, there are many stories of people in the community coming together in spirit, if not in person.

The latest from the Cayuga County Health Department.

Our classrooms have been empty since the middle of March, but Community Action Programs Cayuga/Seneca’s Early Childhood Program, which include…

Peers in Cayuga County, a nonprofit organization that supports and advocates for people in the area with mental health challenges, is seeing c…