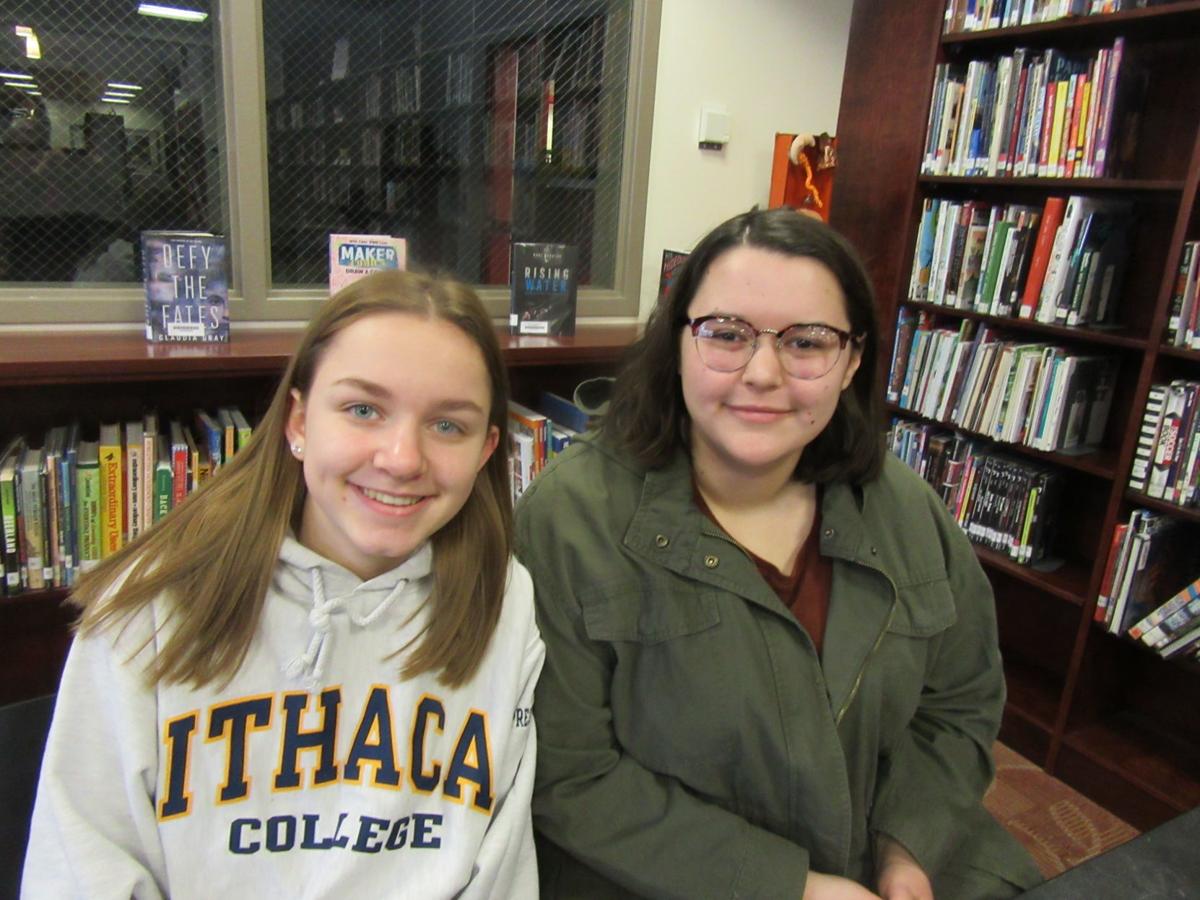 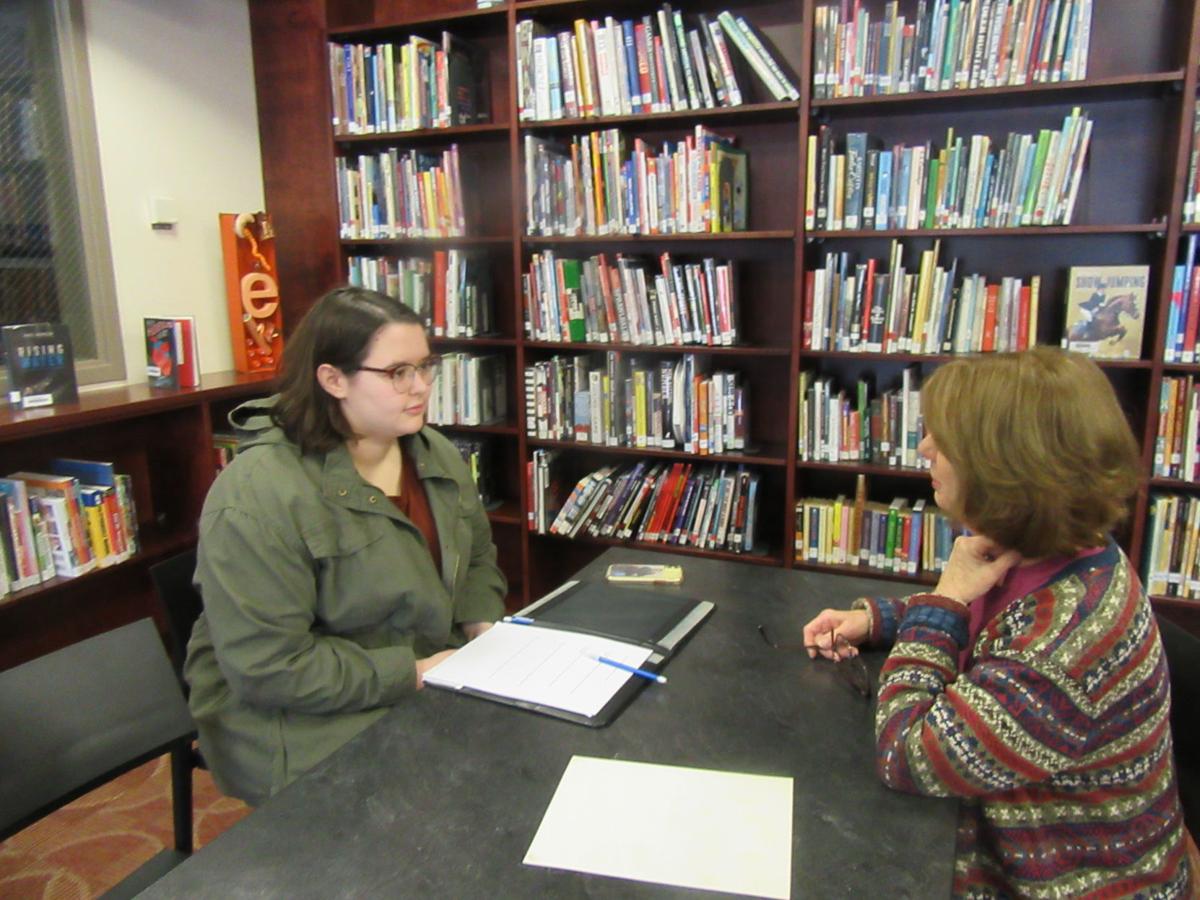 I arrived for my interview with Isis Binns, a senior in Bill Zimpfer’s journalism class. As I approached the high school office, I anticipated the questions Isis might ask about the King Ferry Food Pantry’s “Healthy Bodies Strong Minds” for her article to appear on the Southern Cayuga High School Source’s Facebook page. Isis was waiting, notebook in hand, and our interview lasted 30 minutes. I was so impressed with her questions and enthusiasm, I asked her if I could meet with her and another journalism student to discuss their work for The Southern Cayuga Source, the student newspaper, and their study of journalism. We laughed that the interviewee would become the interviewer at our next meeting.

When Isis and junior journalism student Wisteria Kirk met me in Bill Zimpfer’s class, we adjourned to the high school library for our interview. I began by asking them how they choose their topics. Isis said that frequently Mr. Zimpfer assigns the topic, as he had by suggesting her interview about the King Ferry Food Pantry. Wisteria noted that she regularly covered sports and school events. Isis covers school events and clubs with an emphasis on the arts. They both agreed that if they came up with topics or a specific angle on a topic, Mr. Zimpfer was interested.

We discussed developing interview questions. “First and foremost, I think about what would interest me on a topic. Then I think about what would peak my fellow students’ curiosity. I do background research as well.” Wisteria recalled her interest in the Southern Cayuga soccer team that included, for the first time, a girl on the team. “The team went on to win the 2020 Whitman Indoor Soccer Tournament and the headline read, ‘Well played boys... and girl!’ I interviewed all the team members and really had no idea what the boys on the team would say. I was delighted when they talked about her playing skills and how she was a perfect fit for their team. They called her both a good person and a good athlete.” Both girls agreed that they had an advantage in being in a small school and knowing many of the people they interviewed. “When they know you, they tell you what they really think. It makes for a much more interesting story.”

The conversation then moved to the length of their articles and the reader’s interest in print. Isis began, “Our Twitter account only allows 280 characters. That is not a huge problem with most sports stories. Readers want to know who won and one or two highlights about high scorers and ranking. They love scrolling down tweets for easy information.” Isis and Wisteria agreed that in general, students do not want to spend time on longer articles. “We have found that students prefer our Twitter account and it is faculty and family who like the longer articles — unless the article is about them. Everyone loves to read about themselves.” As we finished our interview, they encouraged me to follow up with Bill Zimpfer. “There are lots of interesting changes in our program. Next year we will be getting college credit for the class.”

Bill and I talked about the changes to the journalism class. “It is currently a one-credit English elective. I have 11 students in grades 10 to 12. Everyone writes and it is safe to say everyone emerges from the class a better writer. We build writing confidence and the ability to work with deadlines. Our current plan is to change this from an elective to a more academic class. We will include theory and background and talk more about the First Amendment and landmark cases. I see it as three days of college syllabus material and two days of writing, critiquing and publishing. Students will earn SUNY credits for their work.”

As I left the room, I spotted Isis, who waved. If you want to know more about my interview, see Isis Binns’ article “Healthy Bodies Strong Minds” on The Southern Cayuga Source's Facebook page. While you are there, browse the site. Read and enjoy as these young journalists tell the story of Southern Cayuga High School with great style, enthusiasm and accuracy.

OWASCO — The reason Connie Ryan organized the Hamlet of Owasco's first Craft Fair and Chili Cook-off laid in the yard behind the fair itself: …