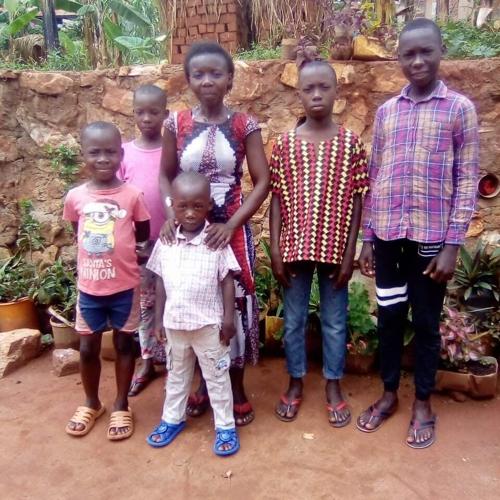 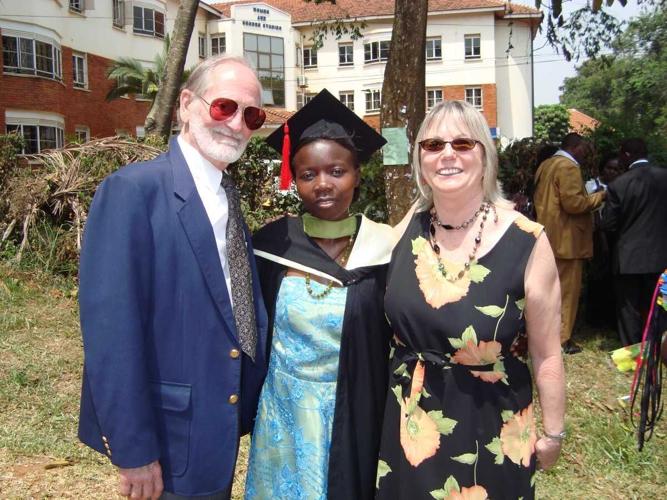 Bob and Beverly Miller flew to Uganda to attend the college graduation of Agnes in 2011. 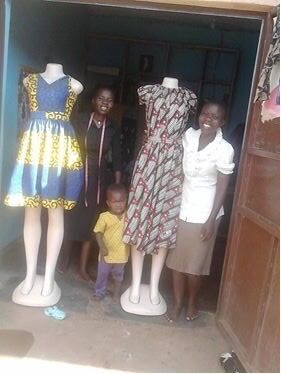 Agnes and her sister Margret at their dress shop in Kampala, Uganda.

Beverly Miller Special to The Citizen

The story of Agnes Nagaddya is familiar to members of Westminster Presbyterian Church in Auburn. Agnes Nagaddya is a young Ugandan woman whose dream was to finish elementary and high school and aim toward earning a college degree. Her dream has expanded to a larger one to educate children in her extended family, and it has inspired the Uganda Education Project to help it become a reality.

Agnes was working at an entry-level job in a hotel internet café when she met Bob Miller, an American who was in Uganda for a consulting job. Agnes and Bob chatted each day while he used the internet. When the time came for him to leave Uganda, she asked him if she could write a series of essays for him to correct and edit, to improve her English. As she confided in him, “To stay uneducated, it hurts.”

Agnes was not looking for a handout. She was looking for an education. She has worked hard for everything she has achieved. And with the support of people who became her American friends, and then family, she finished high school and went on to earn a degree in accounting and business management at Makerere University in Kampala, Uganda’s major city.

That was only the beginning of what has now become the Uganda Education Project. Agnes has used her own education as a means to provide educational opportunities for her family members. The entire Westminster congregation has now been blessed with the chance to become part of Agnes’s family, and has been inspired to expand supporting her dream through the Uganda Education Program. Her education has become our education.

A lesson from Agnes

We learned important lessons from Agnes. There was so much she might have wished to do with the support we sent her: a better home to replace the single room she shared with her sister, more food, an easier life. But her top priority was always education.

After facing the harsh realities of the Ugandan economy, searching for a job in vain for over a year, Agnes decided the only way to earn a living was to start her own business. Using her degree in accounting/business administration, she put together a basic budget to open a small shop. She went to banks and other resources to apply for funding. The amount needed was only about $1,500, some of which was contributed by members of Westminster. Several years later, she is still in business. She has never asked us for additional support for her shop. And within a year, her sister Margret joined her, using dressmaking skills she gained through support from another church member. After earning her certificate in design and dressmaking, Margret became Agnes’ business partner. Since then, Margret has married and given birth to two daughters, both of whom she and Agnes are preparing for school when the time comes.

When Margret left her home with Agnes after her marriage, Agnes brought her nephews Solomon and Darius from the family village to share her single room. Her goal was to enable them to go to school in Kampala. At ages 10 and 7, neither one had yet started school, because family members in the village could not afford tuition. (Tuition is charged for every grade in Uganda; no child can attend school without paying.) Agnes began paying Solomon’s tuition out of the small profits from her shop. Though he started late, he is doing very well. His report card stated: “He is disciplined and eager to learn.” When the Westminster family saw Solomon’s success, the Mission Committee offered to pay tuition for Darius, who quickly showed himself to be an enthusiastic student.

Agnes was thrilled to receive support for her nephew’s education, but did she use the extra income to improve her lifestyle? No. Once again, her priority was educating her family. Solomon and Darius had one more sibling who still lived in the village: their 5-year-old sister Jesca.

Agnes asked if the Westminster Mission Committee could help her start Jesca’s education. Since she could not fit a third child in her home, her brother Fred agreed to take Jesca to live with him, his wife and his two young children in their small home in Kampala, so she would be able to attend school in Kampala with her siblings. In addition, a member of another American church offered to sponsor Jesca, paying her full tuition.

Fred’s two children have now joined Solomon, Darius and Jesca in school. Westminster now considers our Ugandan family to be part of the church family, and creative ways have developed to bond with them. Agnes sends letters and photos to the church family, and has become friends with many church members through Facebook. Christmas and birthday cards are exchanged between Uganda and the U.S. Two Ugandan children, Martha and Jesca, have church sponsors who provide full tuition support. Solomon and Darius received tuition support from Westminster’s annual Loose Change Offering, which focuses on the Uganda Education Project each May. And in 2022, for the first time, a fifth child has been added to the school enrollment: Fred’s son Joseph has entered kindergarten!

What is the next step? When Agnes’ family gathered in the village to celebrate the growth of the Uganda Education Project, her Uncle Gabriel spoke, saying: “My sister’s children, you are blessed, having this connection to Americans. It is a clear and open sign that we are now one blood, one body, one family."

A Westminster committee has formed to enlarge the project for children who otherwise could not attend school. The first step is to build a larger fund by raising more money. Keeping five children in school is expensive, and we need to prepare for new terms each year. Our goal is to involve more people in fundraising. We hope to find more sponsors who each take full responsibility for one child. We also need to reach out to more people who will make annual donations as many do now. We will try to involve others beyond our own congregation who will pledge annual gifts. As the fund grows, we will be able to help more children than the five we are helping now. It is a challenging project, but we are committed to working as hard as the children are working to earn good grades. The children in school will write letters to members of their new American family.

A message from Agnes: “The news about the future enlargement of the project for Ugandan children has greatly humbled me. Oh, God is so great, so so great! May the powerful God who started His work of helping poor Ugandan children get and education help build it into a bigger project that so many children will benefit from. The Ugandan family and I will keep praying intensively for the expansion of this project.”

Beverly Miller is a longtime member of Westminster Presbyterian Church in Auburn along with her husband, Bob Miller. For more information, visit westminsterauburn.org.

Gifts to support the Uganda Education Project fund can be made out to “Westminster Presbyterian Church” with “Uganda Education Fund” in the memo line, and mailed to 17 William St., Auburn, NY 13201. For more information, call (315) 253-3331.

Hannah Cartwright's cakes and other creations are homemade in more ways than one.

There is a mix of sadness and joy in Port Byron as work begins on the removal of the old school. For those who attended the school before it c…

A GoFundMe has been launched for Joshua Mycal Haines, an Auburn musician who is in critical condition at the Cleveland Clinic.

The author of a book about his ancestors is hoping to connect with any descendants they may have in the Auburn area.

Three Needs Creative, a marketing agency based in Auburn, was recognized with a 2022 New York State Tourism Excellence Award for its Brave Wom…

How to cook safe at your summer BBQ

Bob and Beverly Miller flew to Uganda to attend the college graduation of Agnes in 2011.

Agnes and her sister Margret at their dress shop in Kampala, Uganda.