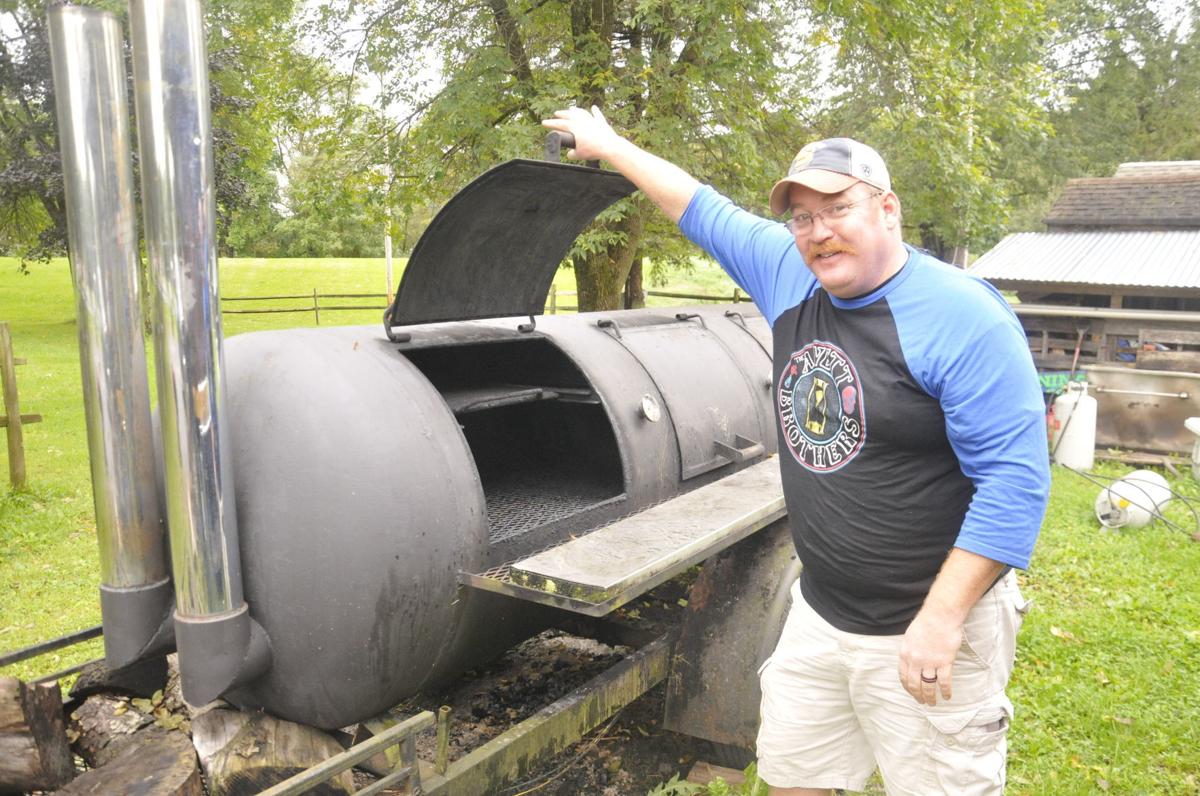 Frederick "Fritz" Hess poses with the meat smoker that's the heart of 10-10 BBQ's operations in Moravia. 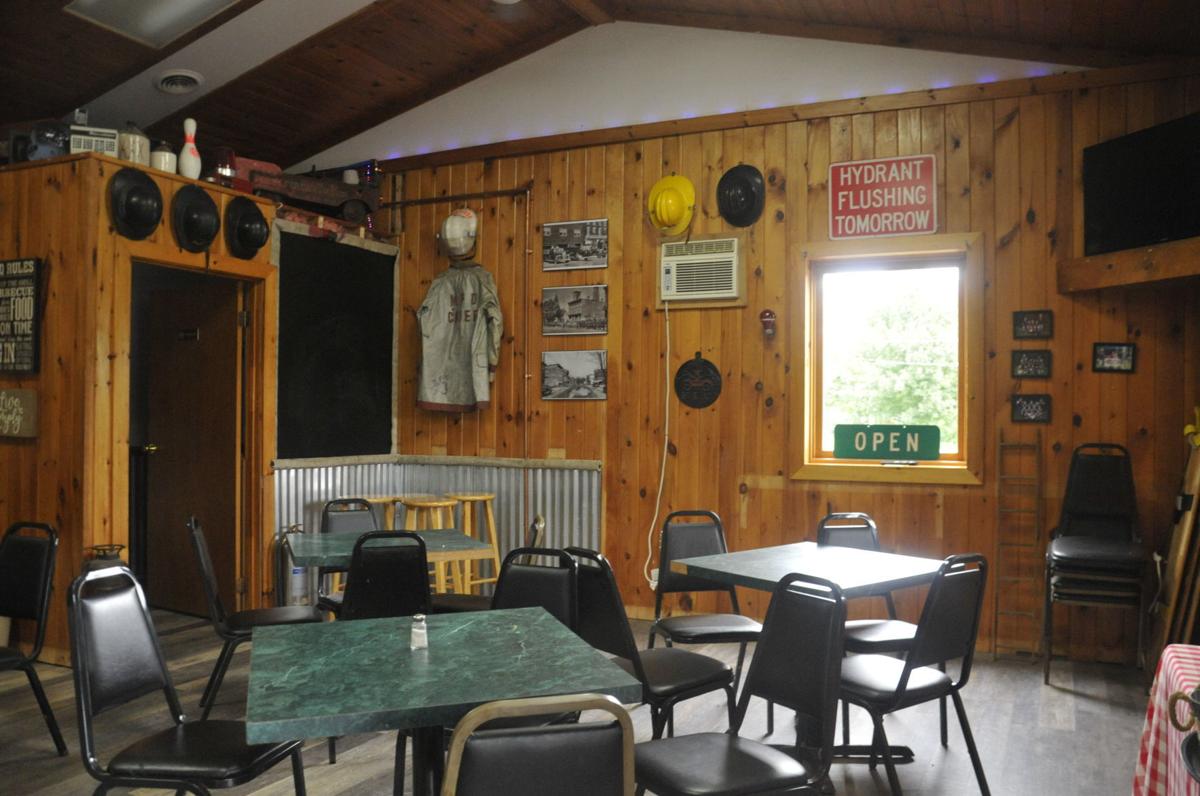 Frederick "Fritz" Hess, a firefighter with the Moravia Volunteer Fire Company, decorates the new 10-10 BBQ restaurant, located just off of Main Street in the village of Moravia, with memorabilia from the history of the department and area.

MORAVIA — For Frederick “Fritz” Hess, owner of 10-10 BBQ in the village of Moravia, running a barbecue restaurant is about more than just meat, rubs, sauces and spices.

As a full-time firefighter who runs the restaurant with the help of his family, cooking good food that people from all walks of life can enjoy is about community, Hess said.

“We just believe food brings everybody together,” he said.

That commitment to community is evident in just about every aspect of 10-10 BBQ, which Hess and his family have run as a catering business for the past 12 years and an intermittently open restaurant for approximately three years.

The inside of the restaurant, which Hess tries to have open for business every other weekend outside of the busy summer catering season, is filled with memorabilia from Moravia’s past, with a specific emphasis on the fire department.

The business actually came as a result of Hess’ work with the department. After running several successful chicken barbecue fundraisers, more and more people started asking Hess if he could provide food for picnics, then grad parties, then more.

“All of a sudden it just snowballed from there,” Hess said.

And as president of the area chamber of commerce, Hess is all about staying local. The meat, cheese and produce all comes from local suppliers, and Hess even gets wood for the meat smoker from the area. All the meat even comes from within a mile, he said.

Hess also emphasizes the importance of working with the community, pointing to the numerous fundraisers and other benefits the restaurant helps with, including one for the Powers Library on Sept. 29.

“We try to help out where we can when we can,” Hess said.

Sourcing ingredients locally also allows Hess, a self-described foodie, to offer barbecue that’s up to his own high standards. While mentions of barbecue often end in arguments about the superiority of Texas, Kansas City or Carolina style, Hess is more concerned with just making it taste good.

On days off from the fire department, Hess gets to the restaurant early in the morning, puts on some music, and “just rocks out” while he spends the day mixing sauces and rubs for the meat, including the signature Iron Plow Sauce made using the Iron Plow Porter from nearby Summerhill Brewing in Groton.

Unlike many other barbecue joints, though, Hess doesn’t slather the meat in sauces. Instead, customers are given soufflé cups with their choice of sauce so they can use it to their taste and enjoy the meat on its own.

“I like to let the meat speak for itself,” Hess said.

If you were to ask most barbecue pit masters for their secret sauce recipe, you’d likely be met with scorn, at the very least. But Hess doesn’t jealously guard his ingredients at all, and is ready to share them when asked.

“What’s wrong with letting somebody enjoy it?” Hess said.

Using what’s called an offset smoker, Hess uses either cherry, apple, oak or hickory logs to cook the meat. With the fire at one end, the heat and smoke travels through the large steel contraption to pass over the meat. Depending on where the meat is placed inside the smoker, Hess can control how quickly or slowly the meat cooks, and how much of a smoky flavor is imparted.

Hess specializes in brisket, ribs and pulled pork, he said. Of those, pulled pork sandwiches are the biggest seller, with pulled pork nachos covered in cheese, peppers, onions and more being another big ticket item.

Hess learned to cook largely from his parents, he said, and so did his siblings. Thanks to that, the business has become a family affair, with Hess’ wife Jessica and their children helping out, as well as his sisters and their spouses. Sister Leigh, Hess said, is “the queen of the mac and cheese,” while Jackie uses family recipes to make the side salads.

While the restaurant itself is only sporadically open — Hess recommends checking its Facebook page at facebook.com/1010bbq for availability — he hopes to get the point where it can be open at least every other weekend.

Running the business while trying to keep up with raising kids and handling all the work of a fire department can sometimes get overwhelming, Hess said. But when a customer sports a smile so saucy it needs a fire hose to clean it after trying his food for the first time, it makes it all worth it, Hess said.

“What more could you ask for?”

WHEN: For hours, visit facebook.com/1010bbq

Watch Now: 15 cities that spend the most on utilities

Watch Now: 15 cities that spend the most on utilities

Frederick "Fritz" Hess poses with the meat smoker that's the heart of 10-10 BBQ's operations in Moravia.

Frederick "Fritz" Hess, a firefighter with the Moravia Volunteer Fire Company, decorates the new 10-10 BBQ restaurant, located just off of Main Street in the village of Moravia, with memorabilia from the history of the department and area.