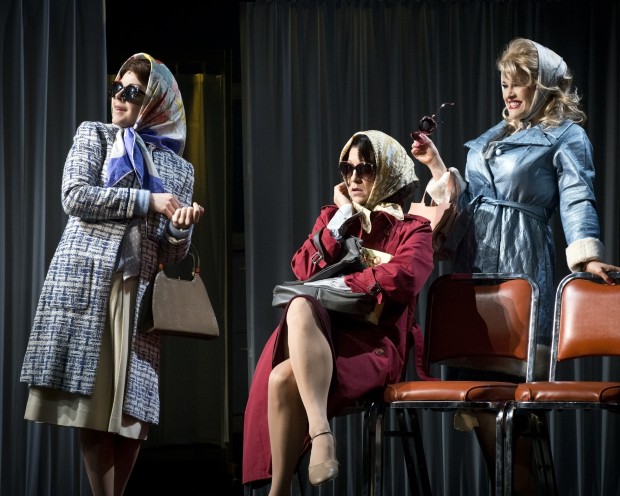 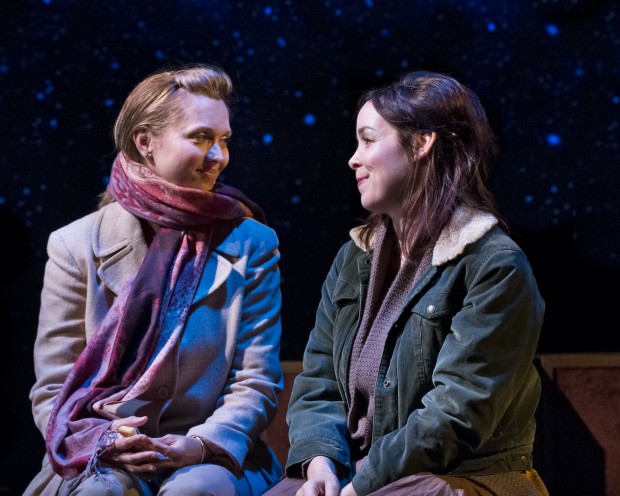 Underlying both "9 to 5: The Musical" and "My Mother's Lesbian Jewish Wiccan Wedding" is an urgency for social justice — for women to overcome workplace discrimination in the former, for gays and lesbians to share the right to marry in the latter. But neither lets its outrage overwhelm the very things people expect from great musical theater: compelling stories, powerful songs and plenty of silly jokes.

Dolly Parton and Patricia Resnick's "9 to 5" is the superior show in terms of stoking the audience's urge to know what happens next. Consolidated Industries employees Judy Bernly (Lindsie VanWinkle), Violet Newstead (Marci Reid) and Doralee Rhodes (Shayla Osborn) are fed up with their misogynistic boss, Franklin Hart Jr. (Josh Powell). He picks less experienced men over Violet for promotions and spreads rumors that he's sleeping with the buxom Doralee. Much as they fantasize about their comeuppance — and they do, hilariously, in gangster-, western- and fantasy-themed dream sequences — it's still somewhat of an accident when they kidnap Hart and tie him up at his home. But the crime gives them the chance to make the kind of changes that help both men and women feel welcome, and therefore more productive, at Consolidated: day care, longer lunch breaks and rehab support.

Reid is fantastically self-assured as Violet, Osborn brings much fun and formidable sexuality to Doralee, and VanWinkle skillfully contrasts her demure workplace Judy with a ferocious self-image in "The Dance O' Death." The three also share a likable camaraderie as they get stoned and vent their mutual resentment of their boss, and later bumble through a hospital morgue when Violet thinks she might have poisoned Hart.

The sets of "9 to 5" are their own star; the late-'70s corporate workplace of Consolidated is realized with plenty of little dispiriting details, from the clunky old typewriters to the ceiling tile lights. Aside from the title song, though, little of the show's music is particularly memorable. There are poignant performances, such as Osborn lamenting that people can't look past her beauty on "Backwoods Barbie," and Judy rejecting her manipulative ex-husband on "Get Out and Stay Out." But none really stick in your head like the bittersweet bop of the show's title track.

The rock-flavored soundtrack of David Hein and Irene Sankoff's "My Mother's Lesbian Jewish Wiccan Wedding" is far less forgettable, if only for the subject matter. There's the humor of couple Claire (Julie Dingman Evans) and Jane (Erica Schroeder) pitching a penis-less existence to Claire's son's girlfriend with surprisingly graphic anatomical analysis — all over beers at Hooters — and later, there's stirring sentiment when Hein chronicles "A Short History of Gay Marriage" while a small band of protestors clamor for the right (with witty signs, such as "Three words to save the economy: gay bridal registry."

The show's real strength, though, is its authenticity and heart. Hein's true story of Claire, his mother, leaving behind a loveless heterosexual marriage in Nebraska to form a wonderful new bond with Jane in Canada is plenty moving without the political undercurrent. Evans and Schroeder share a spectacular chemistry, from the comedy of their awkward first kiss to the elation that comes with their long-awaited marriage. And Hein, with Scott Charles Jr. playing his younger self, reveals the story from his perspective with tremendous sincerity and attention to detail.

The smaller Auburn Public Theater has yet to host so dramatically intimate a show during its affiliation with the Finger Lakes Musical Theatre Festival, but "Wedding" proves it's a perfect setting. Projection screens and a constantly shifting set of oversized wooden blocks are all the visual boost the show needs to present its genuine and absorbing message that everyone should share the right to love.

Lake Life Editor David Wilcox can be reached at 282-2245 or david.wilcox@lee.net. Follow him on Twitter at drwilcox.

WHEN: Continues through July 18

WHEN: Continues through July 28

Organizers of the Finger Lakes Musical Theatre Festival have long touted the potential of its musicals-in-progress series, The Pitch, to spotl…

Dr. Birx: Masks can be a fashion statement