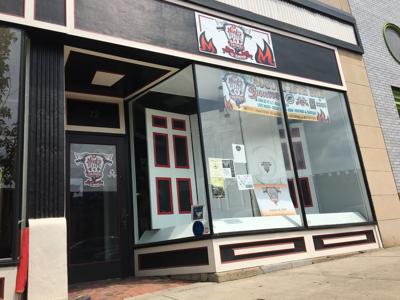 A little over two years ago, Stephen Van Iderstine began relearning how to live.

A month ago, the coronavirus pandemic forced him to relearn again.

Van Iderstine came to GRACE House in Auburn on Jan. 2, 2018, to continue his recovery from 14 years of addiction. Those years took him up and down the East Coast in the clutches of alcohol, cocaine and heroin. He wound up near Dansville, living with his mother because his addiction left him broke even though he was maintaining a job. But after stealing a family member's car to find drugs, Van Iderstine was arrested and sent to Steuben County Jail. He then spent two months at an inpatient facility before coming to the Auburn halfway house.

That day, he said in a phone interview Friday, was when "the rubber met the road" for his recovery. In his new surroundings, and now sober, Van Iderstine had to form new relationships, the foundation of a new structure of living. If he wasn't convinced at first, he was three and a half weeks later. That's when his brother died of a heroin overdose.

"My whole world was shattered," Van Iderstine said. "That really brought me to my knees and made me realize I can't do this on my own."

• Friends of Recovery New York has created a list of online recovery groups meeting by chat, Zoom and more at https://for-ny.org/get-help.

• Confidential Help for Alcohol and Drugs in Auburn has partnered with the Central Region Addiction Resource Center to begin using telehealth for outpatient substance use treatment. CHAD can also provide information on online self-help meetings and other forms of support. For more information, visit chadcounseling.org or cr-arc.org.

• East Hill Medical Center, which offers addiction medicine services, has expanded its operations to anyone in the community, not just established patients. All requrests for services are being screened at (315) 253-8477.

Since then, Van Iderstine has formed those relationships. At first he found them in local recovery groups, including Nick's Ride 4 Friends. Not only could he bare his soul to people on the same arduous path as him, but being in their presence created a sort of accountability, he said. Seeing their posture, hearing every change in their voice, being able to a pat them on the back or give them a hug — it made everyone more empathetic to each other. And that made them want to not let each other down.

Later, Van Iderstine began forming relationships outside those groups. His life had found a new structure. His peers showed him a new way to live, and he used it to build a new, healthy life.

But that structure has been all but torn down by the pandemic, and specifically, the New York State on PAUSE order that prohibits all nonessential gatherings in order to slow the spread of the virus.

"With the disease we have, we can't just put everything on pause," Van Iderstine said.

Many support groups are still connecting by phone and, in the case of Nick's Ride, video app Zoom. So Van Iderstine can still see the peers who've let him into their lives, and vice versa. Since he's now working from home, he can even throw on headphones and listen to messages of recovery almost any time of day. Or he can pick up the phone and have a one-on-one conversation.

Though he's fortunate to continue seeing the same faces — some people in recovery now have no options but online groups with strangers — there's still "something missing," Van Iderstine said.

"People need that interaction with other humans," he said. "I'm all for Zoom, but there's nothing like feeling the emotion in the room. It's hard when you're on camera like that."

And not being able to physically attend support groups is just the first of many challenges that Van Iderstine and other people in recovery are facing these days.

AUBURN — As he accepted a $15,000 donation to Nick's Ride 4 Friends Tuesday, Joel Campagnola…

That's because they've lost the structure that helped keep sober. Most of them are alone, cut off from the world — just like while they were using. If that wasn't dangerous enough, there's also the depression of being isolated, the fear of the pandemic and its harm to the world, and the sheer helplessness of it all. Overcoming that to pick up the phone for help takes strength, Van Iderstine said.

"You have to understand that you're not a victim of the world," he said. "You just have an opportunity to live in it a different way."

Though Nick's Ride has embraced Zoom, Campagnola noted that not everyone can access it. Those who used the computers at Seymour Library, for instance, are limited to phone calls. He's even arranged in-person conversations on separate benches outside the New York State Equal Rights Heritage Center, a block away from the Nick's Ride clubhouse at 12 South St.

The recovery organization has seen a few other trends since the pandemic began, Campagnola said.

Overdose calls are down, and in March, the recovery organization sent eight people through detox and into treatment, one of its highest numbers ever. When they do respond to overdose calls, Campagnola and his staff have been wearing rubber gloves and masks — they never know what they're walking into, he said, and often the person they're helping can't communicate with them.

But Nick's Ride has also been swamped with calls for support, and hired two more peers to handle them. A common call they've received has been from parents who've noticed troubling signs or behavior from their children now that they're home all the time. They've been counseled by Campagnola, who started the organization after his son, Nick, died from an overdose in December 2015.

Working by phone is less efficient than usual, he said. One call to send someone to treatment can take two to three hours, during which time 10 people could have walked through the doors of 12 South St. But Campagnola knows he has to keep trying to provide as close to the same level of support as possible. Any structure, however new and challenging, is better than no structure.

"We're just trying to keep the interaction going," he said. "So people aren't slipping through the cracks or feeling like they're forgotten about."

Donovan: Resources for people in recovery during COVID-19

The coronavirus pandemic has caused problems across a wide spectrum of issues. Social distancing, although helping to slow the spread of the v…

A global pandemic. Economic free fall. Isolation from others.

Mulholland: You can save lives with Narcan

COVID-19 is a perfect storm in the addiction world.

The social distancing we have been experiencing due to the coronavirus has drastically changed how we interact with each other. Families who u…

Schenck: How Cayuga County Jail supports inmates in their recovery

During my nearly 23 years serving the residents of Cayuga County as a law enforcement officer with our sheriff’s office, I have seen a number …

The COVID-19 pandemic has impacted businesses and individuals alike in various ways. While staying distant from others has been part of the so…

Do you suspect or know that your teen has a drug or alcohol addiction problem? This is a situation that occurs across the spectrum of American…

Stigma is defined in the dictionary as a mark of disgrace associated with a particular circumstance, quality or person. While only mere words …

Donovan: The importance of meetings and support groups

The coronavirus has caused isolation, stress and financial hardship across the country. These effects can be felt even more intensely by peopl…

Harm reduction is a well-established approach to the problem of substance abuse, particularly opioid addiction. Among its core principles, har…

Katko: COVID-19 pandemic may cause setback in preventing opioid overdoses

With the focus on one public health crisis, another continues to wreak havoc in central New York.

Bash presses Birx: 'Why did this happen?'

Bash presses Birx: 'Why did this happen?'

5 tasks for White people struggling with issues of race

5 tasks for White people struggling with issues of race