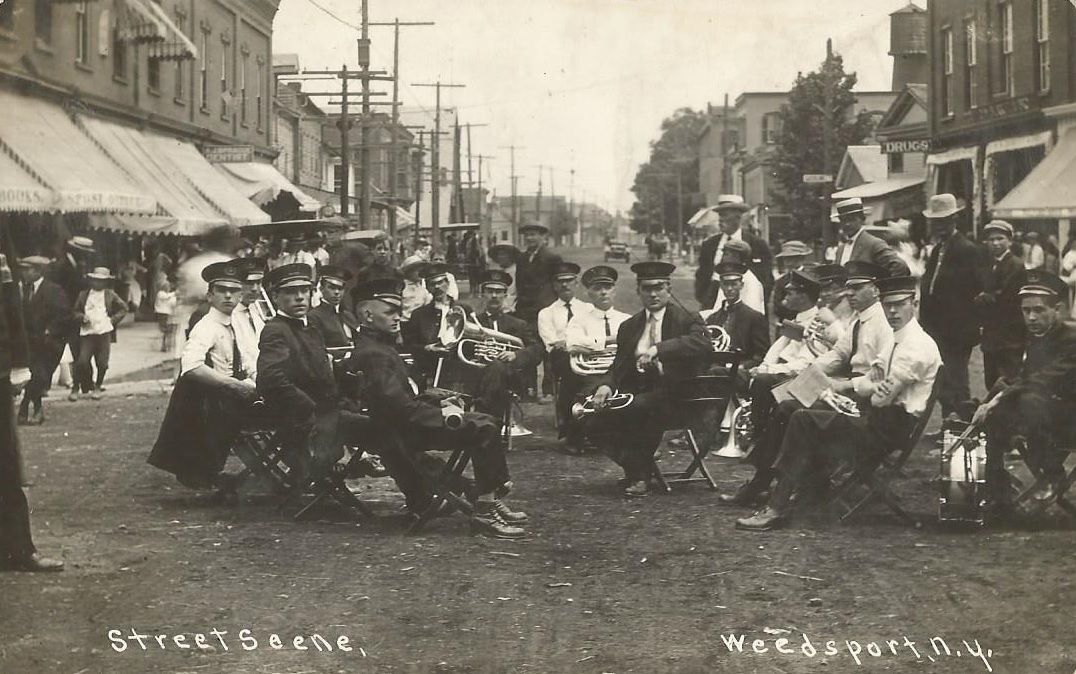 The Weedsport Cornet Band playing at Seneca and Brutus streets (the four corners) in Weedsport. 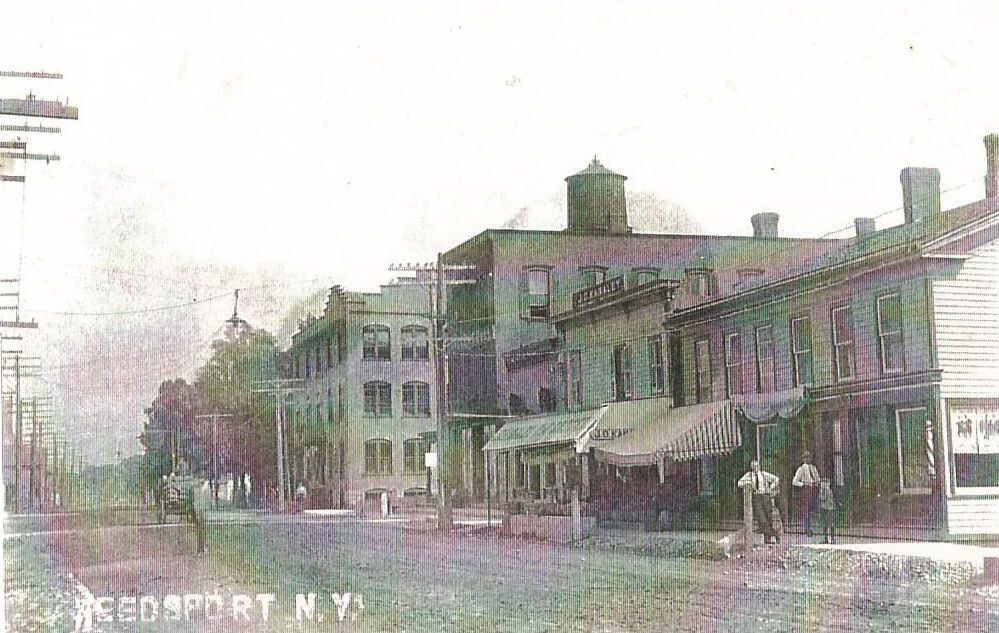 Downtown Weedsport when it included the Kanaley Grocery, the three-story Congress Hotel, the Security Co. and more.

Denny Randall Special to The Citizen

I'll continue on this month with more information from "The History of Cayuga County, 1789-1889."

The first settlements on the site of Weedsport were made in 1802 by Jonah and Nathan Rude near the south line of the corporation, in the area known as Macedonia, known today as Rude Street after the original settlers there. Abel Powers came along shortly thereafter. In 1817 when the construction of the Erie Canal was begun, most of the settlements which by then had gathered in Macedonia morphed north to the line of that great aquatic highway. When this section was completed in 1821, Elihu and Edward Weed, sons of wealthy merchant Smith Weed of Albany, settled on the site of the village, constructed a basin along side the canal in the area of what is now Nickle Jack's parking lot and extending up what is now Furnace Street. They also erected a warehouse on the site.

From them the settlement acquired the name 'Weed's Basin,' and in 1822 a post office was established by the name of 'Weed's Port' and Elihu Weed was named postmaster. With the advent of the Weeds and the development of their business projects an impetus was given to the growth of the place which continued unchecked until the opening of the Auburn and Syracuse Railroad in 1836 and the Auburn and Rochester Railroad in 1840. Weedsport was the canal landing for Auburn, and a large business was done in short term storage, transfer and carriage of goods between the two places. The principle public buildings were storehouses erected to accommodate this business and the chief vocation of the inhabitants was that of attending to the receipt, shipment and carrying of merchandise to Auburn and contiguous places.

The village was incorporated April 26th 1831, but owing to the destruction of the records by the disastrous fire of 1871 (which coincidentally was also the year of not only the great Chicago fire, but also the Peshtigo, Wisconsin fire, which still has the dubious distinction of causing the most deaths yet recorded in a fire), not much is known about the early days of the village. The opening of the railroads was a serious blow to Weedsport and took from it a prestige which has required years of sustained energy and patent industry to recover.

The photos with this column show the Weedsport Cornet Band playing for some celebration in the middle of the street at Seneca and Brutus streets (the four corners). The gentleman sitting in the middle facing the camera with a cornet was band leader Dr. Horace Stone, dentist. The other photo shows what recently would have been the Old Erie Restaurant from across the street. The building next door to the north (left) is the Kanaley Grocery, and next to that was the three-story Congress Hotel, while beyond that is the large building operated by the Security Co. The Security Co. was a knitting mill, which explains the large water tank on the roof to feed the sprinkler system that was required by insurers even at that early date to prevent fire in that type of business. The building looks much the same today as Purple Monkey Antiques. More another time.

Randall: Taking stock of Weedsport in the late 1880s

Since our museum is pretty much shut down for the duration of the coronavirus, we have been taking the time to do some house cleaning. Our lib…

Ozone pollution and your lungs

Ozone pollution and your lungs

The package from Vestal arrived at the Owasco Town Hall on March 3. It contained the scrapbook kept by Denny White of his years as a Polar Bea…

We have arrived at April and the onset of spring! As I’m writing, I am hearing the sounds of birds and lawnmowers, both good signs! This parti…

Every Friday, The Citizen features a pet available for adoption from the Finger Lakes SPCA of Central New York. This week, we spotlight Simon.

We are so fortunate to live in a community that strongly supports local artists and creatives. We have retail shops, restaurants, breweries, g…

The Weedsport Cornet Band playing at Seneca and Brutus streets (the four corners) in Weedsport.

Downtown Weedsport when it included the Kanaley Grocery, the three-story Congress Hotel, the Security Co. and more.