Become a Member
Read Today's E-edition
Share This
Randall: The rural cemetery movement, in Weedsport and elsewhere
Share this
Denny Randall Special to The Citizen

I imagine some people wondered why they would have ever named Weedsport Rural Cemetery as "rural."

Why not "Gates of Heaven" or "Evergreen Hill," or some such great-sounding name? The answer is that Weedsport was part of a movement started in 1831 in Massachusetts, in an area between Watertown and Cambridge. There, it was decided that to build a new cemetery, Mount Auburn Rural Cemetery, which would be set in a rolling terrain, breaking with traditional churchyard and colonial-era burying grounds where it was important to get as many people in the ground in the limited amount of space available. It was felt that a cemetery should be beautiful and park-like — in fact, the word "cemetery" is derived from the Greek to mean "a sleeping place," rather than a graveyard. The 174-acre Mount Auburn Rural Cemetery is important because it started a rural cemetery movement across the country.

The rural-type cemetery was intended to convey a park-like atmosphere to those interred there and visitors alike. Other cemeteries were soon to follow, including Oakwood in Syracuse, Mount Hope in Rochester and Albany Rural, as well as Weedsport Rural in 1860. In Weedsport, "God's Acre" on South Seneca Street was nearly at capacity, with no room for expansion, and it was obvious that the growing community must find a new site. A committee was formed of several town movers and shakers, including W.J. Donovan, M.C. Remington, C.C. Adams, O.W. Burritt, C.C. Caywood and S.W. Treat. At a subsequent meeting attended by many interested townspeople, articles of incorporation were drawn under the name the Weedsport Rural Cemetery Association, as they had decided to follow the lead of Mount Auburn and others. In due time, a board of directors was appointed and on July 2, 1860, it was decided to purchase the original 8.75 acres for $787.50. By 1880, it was necessary to purchase much more land, as the original areas had been to a large extent used up by "death's silent tenants" from neighboring towns and villages eager to be interred in the beautiful park-like setting of Weedsport Rural, which by now had been planted with the pines (which are now huge).

Indeed it was beautiful, and daylong excursions were encouraged. The roadways all had street signs and the triangle in front of the private vaults was planted with spring bulbs and flowering perennials, as was the triangle in front of the receiving vault. A windmill at the top of section 22 provided water for the underground piping before the village supplied water from their spring line. There was even a commodious (forgive the pun) four-hole outhouse that was only torn down within the last 10 years. Many family plots were lined with ledger stones, or cast iron decorative posts and chains. The entire cemetery was surrounded by a wrought iron fence. There were many fancy cast iron hitching posts, several of which are still in place.

Gravestones were encouraged not to be of a same kind and shape, as continuous uniformity must always be avoided. Variety provides a much more pleasing effect. Early on, the lot holders were responsible for mowing and their own maintenance, although the association would do it if necessary, and bill accordingly. Unfortunately, Henry Ford pretty much did away with the concept of the truly rural cemetery in the 1920s, when instead of spending a peaceful day in the cemetery you could hop into your Model T and go anywhere. Having said all this, Mount Auburn retains its original concept and is a registered National Historic Site.

The photo with this column shows the original front gate of Weedsport Rural Cemetery, which was just around the bend on East Brutus Street Road. The entrance was relocated farther up the hill many years ago because of the trouble that coming up on a slow-moving funeral caused when you suddenly came around the bend in the road. 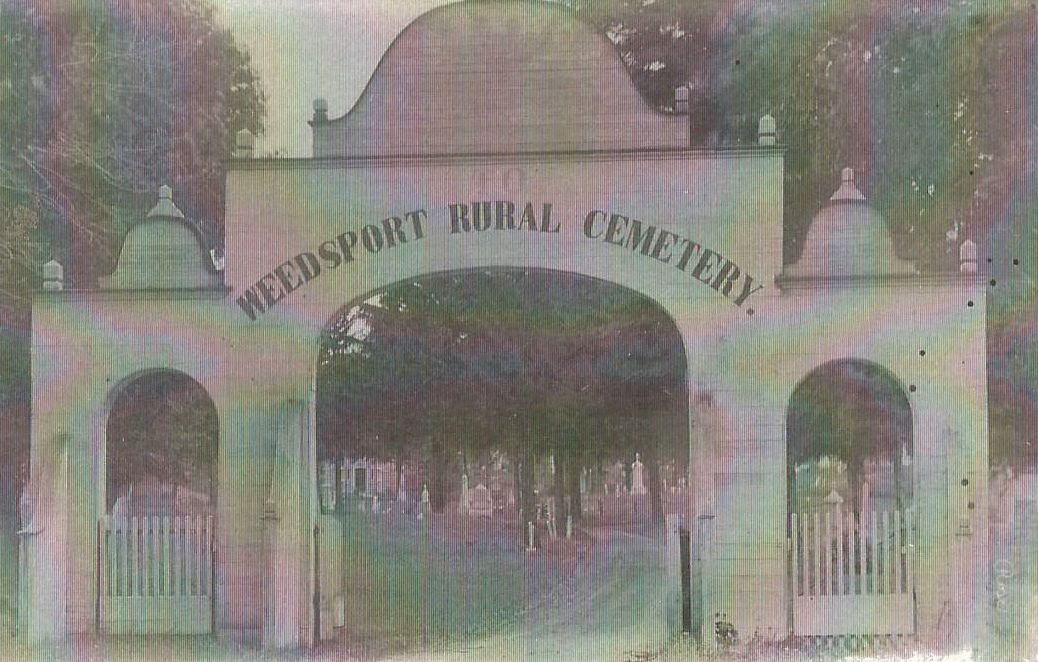 The gate of Weedsport Rural Cemetery.