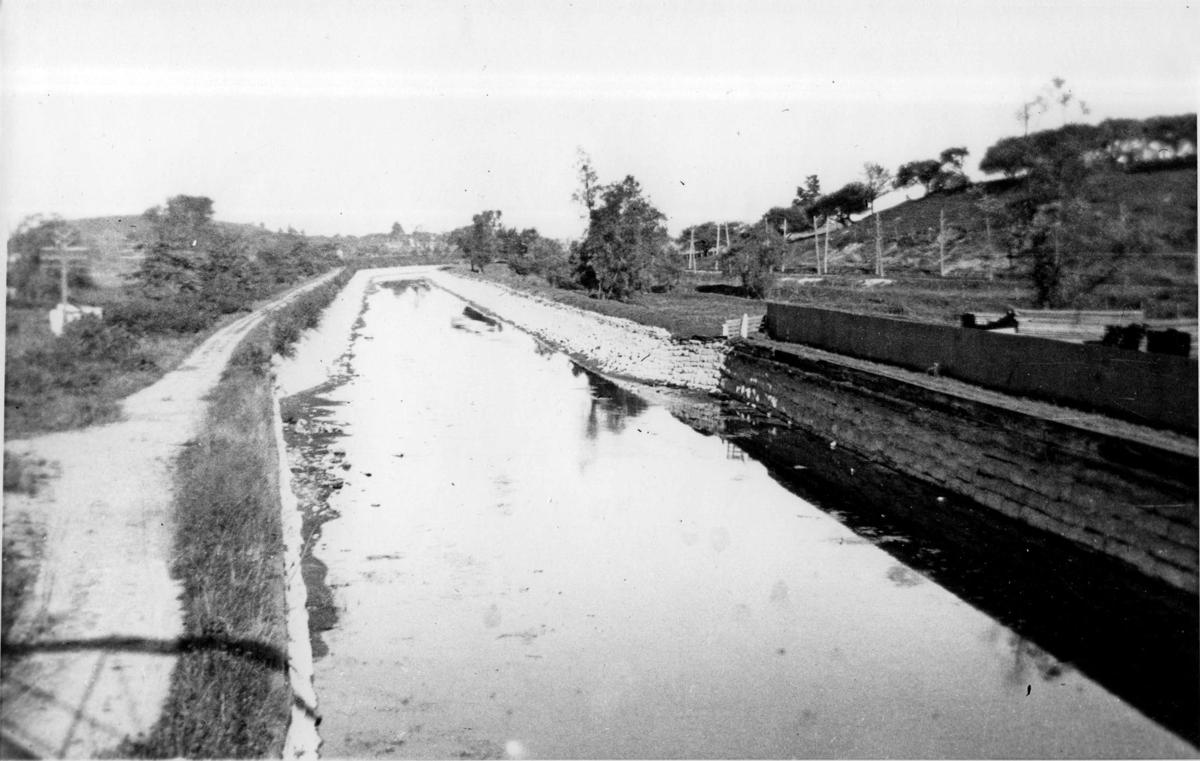 Schasel Park in Port Byron after the old Erie Canal was abandoned but before it was filled in by the state. 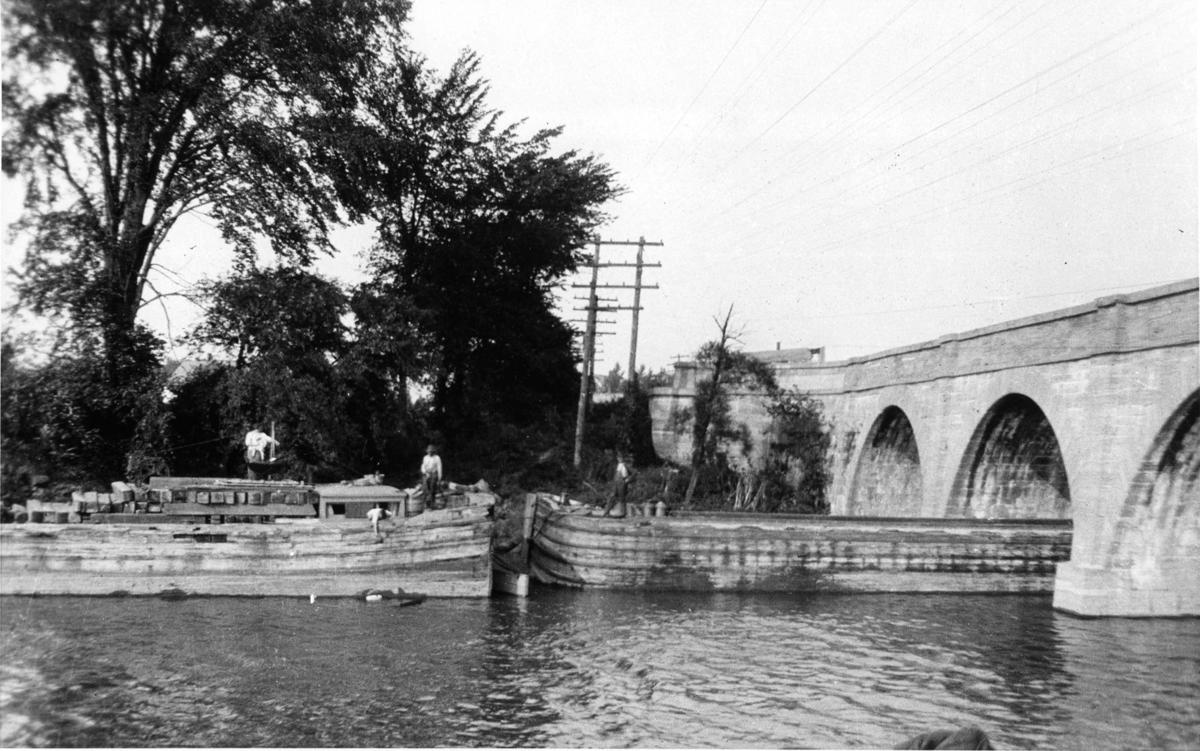 Canal boats under the Schoharie Aqueduct.

Michael Riley Special to The Citizen

We never know where the next historical topic is going to come from or what it might involve. This year has been full of surprises for us at Lock 52 Historical Society.

Our friends at the Canal Society of New York State recently came across some photographs taken by Franklin and Reta Burke. As a young couple, the couple worked with Franklin's father, Abram, who was the owner of a couple canal boats. After getting married in Fairport, Franklin and Reta moved to Port Byron and lived on Green Street, while Abram lived in Tonawanda. One of the photos with this column show the canal boats under the Schoharie Aqueduct as it was being dismantled after the canal was closed in 1917. (Schoharie is about six miles west of Amsterdam, and is now home to the Schoharie Crossing State Historic Site.)

The photos with this column came from Robert Scarry, who was a school teacher in Moravia and is more known for his work on President Millard Fillmore. Robert was also a Canal Society member and interviewed Franklin Burke in 1965, carefully recording whatever the old boater had to share. Robert shared the photos and info with the Canal Society, and they were tucked away until now. One of the items that Franklin shared was his birth certificate, which states that he was born on the canal boat Edda E. Burke while it was docked in Brooklyn. Edda was also Franklin’s mother. Many of the older folks might remember Franklin as their postman.

Also found in this collection were a couple photographs of the old canal near Utica Street in the village. Reta Burke (nee Pinckney) took these after the canal had been abandoned but before it was filled in. The one I shared here shows what is today Schasel Park. Mrs. Burke was standing on the old Utica Street bridge. Many of these bridges stood for some time after the canal was closed, as the villages waited for the state to remove them. Robert Scarry said that he returned the photos to the Burke family, and I hope that one day they reappear again.

My column about the Ray family last month helped to make some connections with the grandchildren of the family. One of them shared a remembrance written by his father, Burdett Ray. In this long article, Burdett leads the reader through a tour of the business district of the village, and he adds some notes about the store owners. Burdett was one of those folks who had lived through some major changes and wanted people to remember the past. Luckily for us, he wrote his recollections just prior to his death. His son kindly allowed us to post the article to the Lock 52 website so that others can enjoy and learn from it.

The family of Lila Fields (nee Kerns) donated many of Lila’s family photos to Lock 52. These show a close family enjoying each other, and even their horses. Lila was the daughter of Elmer Kerns and Ada McGetrick, and her family tree has names such as Derby, King and Shotwell. The Kerns family was well-known for running the grocery store that sat lock-side at Lock 52. Thankfully, Lila and her daughter went through and labeled almost all the photos so we have names of the people — and the horses! We are always so grateful when we see photos that have been labeled. You can find many of these photos on the Lock 52 Facebook page (@Lock52HS).

We were very saddened to hear that John “Jack” Miller passed away in his home in Hawaii. For many years, Jack would return home to Port Byron and visit with friends. Jack was another of those folks who was very proud of his village roots and did a lot of work studying his King heritage. Jack’s mother was Charlotte Tanner, the granddaughter of O.B. Tanner, who ran the local canal dry dock. Her mother was Charlotte Kerns, the daughter of the Kerns who ran the lock grocery that was just next door. It is easy to think that perhaps the couple met while working at their parents' businesses.

The Port Byron Fire Department will host a community day on Aug. 14. The members of Lock 52 Historical Society will be there to talk about local history and if things work well, we will have on hand our Port Byron family tree project. Stop by to see if your family is in the tree, or share with us how they might be added.

A more general rejection of the views of science about the universe in which we live might shed some light on our discussion.

Southern Cayuga Conversations: Step by step in a new country and new school

Fencer and friend: Olympic gold medalist who made Auburn her home remembered

By the time she first saw it, Kathy McClane had already known Gillian Donaldson for a few years.

The Auburn Hunger Task Force has announced that it will resume meal distributions from 11:30 to noon Wednesdays, beginning July 28, with the A…

Randall: Memories of searchlights, shoes and more in Weedsport

Let me take this opportunity to use this bully pulpit to express my sincere thanks to those who have sent cards, thoughts, prayers, visits and…

“Poverty is a very complicated issue, but feeding a child isn’t." — Jeff Bridges

Schasel Park in Port Byron after the old Erie Canal was abandoned but before it was filled in by the state.

Canal boats under the Schoharie Aqueduct.