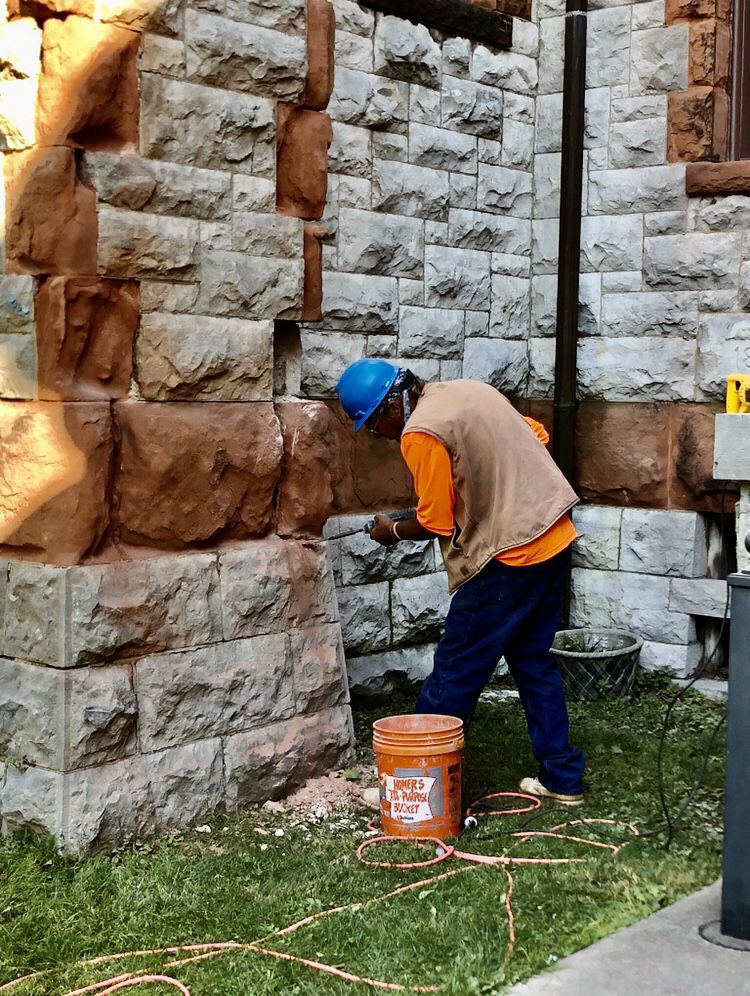 Masonry by Lupini Construction at Willard Memorial Chapel in Auburn this fall. 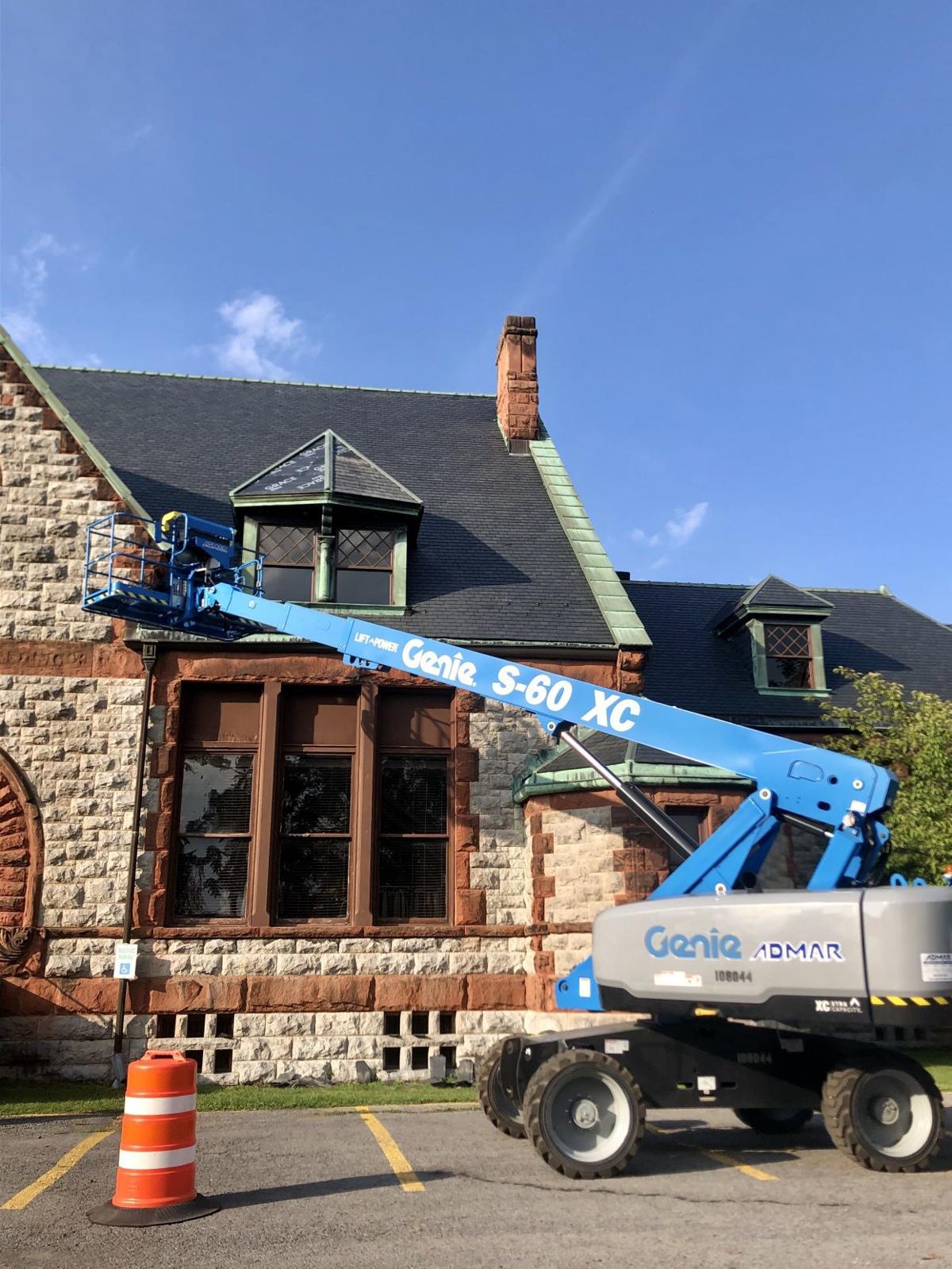 Roofing work being performed by Pulver Roofing at Willard Memorial Chapel in Auburn this fall. 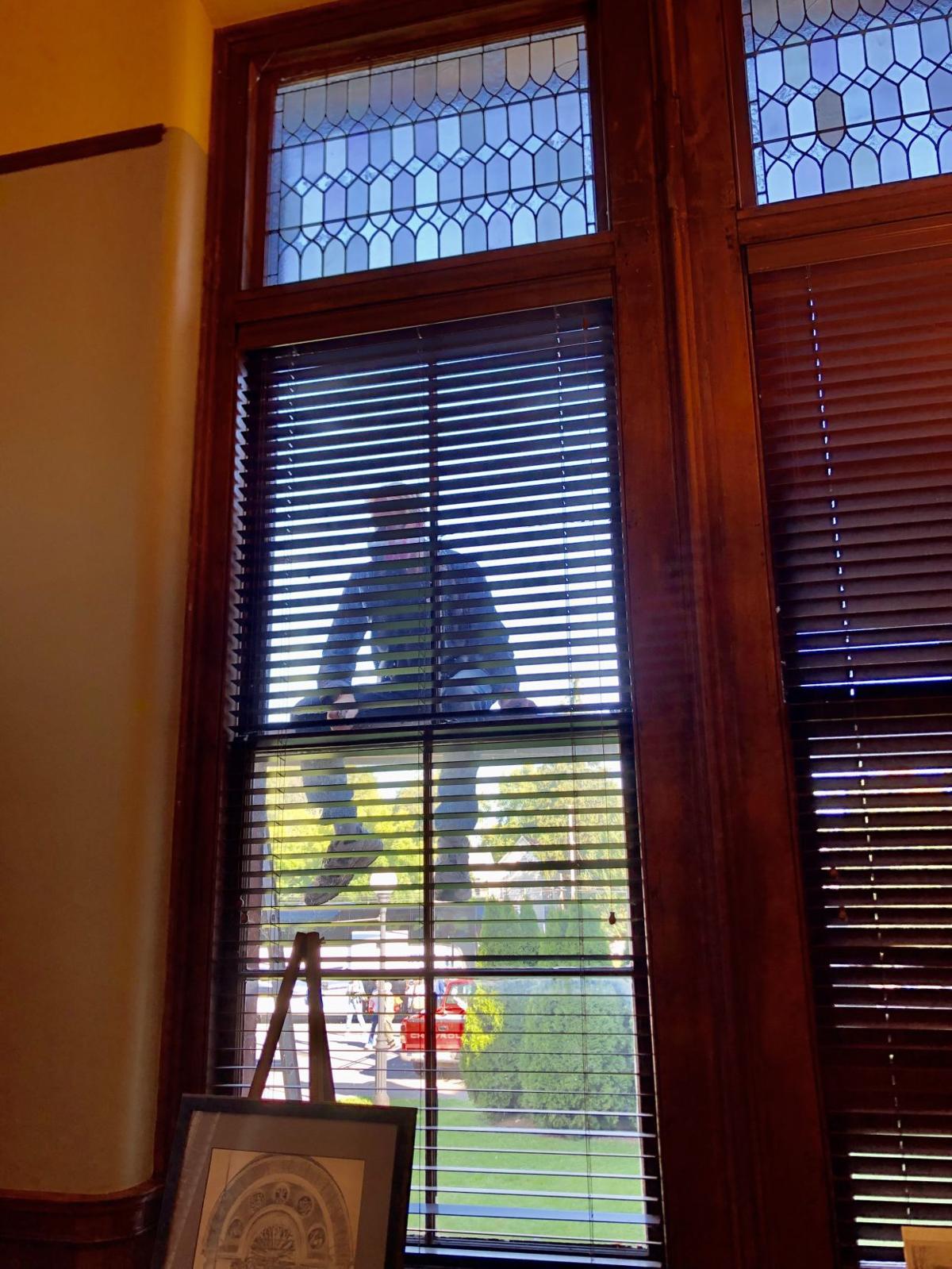 Visitors to Willard Memorial Chapel early this fall saw an unfamiliar sight: a cherry-picker crane sat in the parking lot, tall ladders leaned against the limestone walls, packs of slate tiles and sandstone blocks reposed on the grass. In fact, a thorough renovation of the property had begun, especially for the chapel, but including the Welch Building as well.

“Some of these projects are going forward now, some are scheduled for the coming months, others may have to wait 10 years,’ said Kathy Walker, executive director of the Community Preservation Committee, which owns and operates the Auburn buildings. “But it all has to be done,” Mrs. Walker added. The committee is a nonprofit organization that depends on state and foundation grants to accomplish its goals. The current work is being financed by a $500,000 state preservation grant, and an additional $267,000 from the Downtown Revitalization Initiative.

Eroded red sandstone blocks have been extracted from the chapel’s walls like bad teeth, and replaced by fresh stone neatly slotted into the gaps. Defective tiles in the slate roof of the Welch Building have been replaced. New downspouts, gutters, flashings and copings have been installed to ensure that the roof sheds rainwater effectively. A snow melt system has been installed in the attic.

Of the 102 windows of the buildings, all but the basement windows are being repaired and restored. William J. Clark of Auburn is doing the windows; Pulver Roofing of Utica performed the roof work.

The most crucial project in the chapel involves the large gilded plaster tablet on the south wall, featuring the Willard sisters’ dedication to their parents, and the allegorical figures of Hope, Faith and Charity. For many years, extensive cracking has been apparent in the piece, which was executed by Jacob Holzer, Tiffany’s assistant. “There is no apparent cause for the cracking,” according to a technical report.

A special depth-penetrating camera probed the structure of the gilded and mosaic relief sculpture. In addition, small holes were drilled in the mosaic to study the interface between the plaster and the limestone base. The report noted some water damage, but stated that the work is in no danger of falling off the wall onto the chapel floor. In time, the cracks will be closed and the gold finish touched up. Crawford and Stearns Architects, of Syracuse, have been entrusted with this project.

Also on the south wall, above Holzer’s tablet, the stained glass window showing Christ and St. Peter on the Sea of Galilee, and the fan above it, need to be cleaned and restored.

The situation of the nine Tiffany chandeliers in the chapel is less urgent. Originally gas-lit, the chandeliers were converted to electricity early in the 20th century. Their current hybrid fixtures will be replaced by unobtrusive electrical fixtures. What’s more, a new electrical system will allow different levels of luminosity in the room, depending on the nature of the event scheduled: weddings, concerts, remembrance services, talks or public assemblies. Evergreen Architectural Arts, of Brooklyn, has been entrusted with this project.

Longer-range is the measure that would almost completely restore the chapel to the condition Tiffany planned for it: restoring the walls to their original crimson color. The current beige treatment, applied in the 1950s, completely compromised the nature of the room. Tiffany’s is a Romanesque interior with narrow windows, meant to be dark and conducive to prayer and meditation, but also to promote the colors of the stained glass windows. Current visitors to the chapel find the interior most impressive with the lights off. A start was made in 2013 when the Swiatek firm of Buffalo restored the southwest corner of the chapel.

New landscaping for the chapel and Welch Building is also on the agenda. Seminary Square has come a long way from the 1960s, when it looked like Richmond, Virginia, in 1865. New plantings, new approaches and a new parking area would go far to create a park-like setting not unworthy of the original seminary campus.

A final observation: The green circle on the wheel window in the chapel’s apse is not original with Tiffany, rather the result of a storm that damaged the original design in the 1970s. Visitors have remarked on its glaring, clashing character. It should probably be replaced by a facsimile of the original, which carried the words, “Presbyterian Church of the United States.” If this is done, the chapel could truly be promoted as "an exact restoration of the only complete Tiffany Chapel interior in the world."

Crawford and Stearns Preservation Architects of Syracuse will oversee all aspects of Willard Chapel restoration projects.

With luck, the public can look forward to a building that faithfully goes back to Tiffany’s vision and surpasses it in terms of 21st century lighting, which was not available for the master’s talent in the 1890s.

The Cultural Italian American Organization of Auburn will be selling traditional pizza fritte for $4 from 11 a.m. to 4 p.m. Saturday and Sunda…

Cayuga County-area scholastic honors for May 20, 2020

Look back: Tilt-a-whirl time at field days in Locke

Heery: How the church’s closing may be its salvation

I remember the first time I worshiped in prison. I was a seminary student, studying to become a pastor, and it was my first day serving as an …

Masonry by Lupini Construction at Willard Memorial Chapel in Auburn this fall.

Roofing work being performed by Pulver Roofing at Willard Memorial Chapel in Auburn this fall.