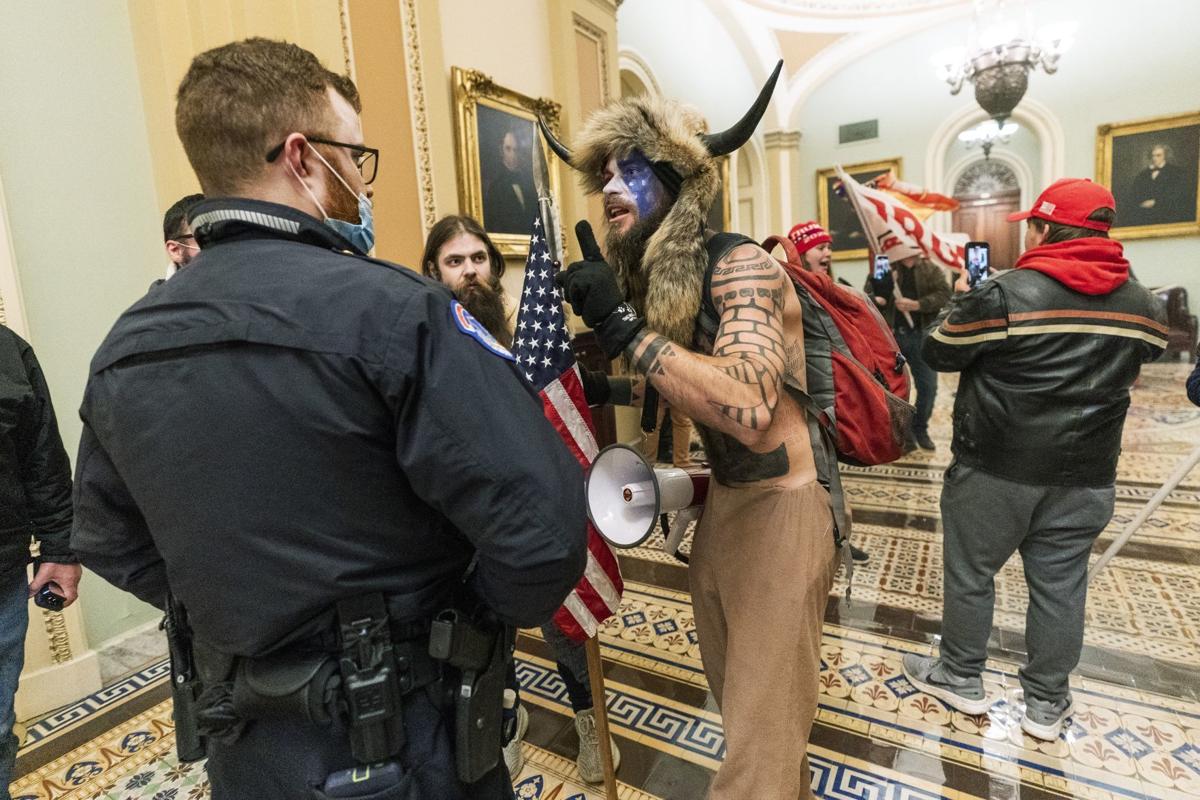 Supporters of President Donald Trump are confronted by U.S. Capitol Police officers outside the Senate Chamber inside the Capitol on Jan. 6 in Washington. An Arizona man seen in photos and video of the mob wearing a fur hat with horns was also charged Saturday in Wednesday's chaos. Jacob Anthony Chansley, who also goes by the name Jake Angeli, was taken into custody Jan. 9.

Recent events in Washington reminded me of something that happened in Paris 80-some years ago, which may be of interest today.

On the evening of Feb. 6, 1934, a right-wing mob of several thousand people on Concord Square prepared to assault the Chamber of Deputies, seat of the National Assembly, the French parliament. The immediate cause was the Stavisky scandal, in which a Jewish-Ukrainian broker with ties to the government had sold worthless bonds to the public. In January, Serge Alexandre Stavisky was found dead, an apparent suicide, but many assumed he had been murdered to keep him quiet.

A crowd had been gathering for hours and the government was ready. The mob had to leave the square and cross the Concord Bridge to attack the chamber, a large building with a colonnade front. Despite repeated assaults against police barricades, the attacks failed. The police fired on the crowd, which had mainly projectile weapons. Sixteen people died, and hundreds were wounded.

Alexander Werth, a British journalist, was there and was convinced that the mob, had it been able to get inside the building, would have attacked the deputies and brought down the Third Republic. Historians are less sure, pointing out that the mob had no single leader, and consisted of different groups with different aims. Despite a vote of confidence from the assembly, the prime minister, Edouard Daladier, resigned the next day. The Doumergue ministry took its place. For the first time, a legitimate government of the Third Republic was brought down by street violence.

During its 70-year lifespan from 1870 to 1940, the Third Republic survived three major crises: First, in the 1880s, “Panama," a government-sponsored investment scheme in which deputies took bribes and millions of small investors lost their life savings when the company building the canal went broke. Some of those involved went to jail, but much about the affair remained unclear and left an impression of government corruption.

Panama was followed by the Dreyfus Affair, in which a Jewish army officer was accused of betraying military secrets to Germany. The affair lasted from 1894 to 1906. Dreyfus, although clearly innocent, was pardoned, but never judged "not guilty." France was deeply divided. Many people held the army sacred, believed Dreyfus guilty and were convinced the republic was run by Jews and Freemasons. Right-wing mobs roamed the streets, looking for Jews to beat up. Then there was the First World War.

By 1917, a million young men had died and the Nivelle offensive in the spring failed miserably. Mutinies broke out in the army. Victory seemed impossible; there seemed little to do but seek peace at great disadvantage. George Clemenceau, who had been prime minister before the war, was asked to form a government. Although the Third Republic’s parliamentary system seemed designed to produce mediocrities, Clemenceau was different. His policy was, “I make war.”

Clemenceau visited the front, listened to the soldiers and proposed reforms, including more leave. The front stabilized. The organizers of the mutiny were court-martialed and went before firing squads. His larger-then-life bronze statue in Paris shows him at the front, forging ahead in helmet, military greatcoat and boots.

The French riots of 1934 were part of a tradition of left vs. right street violence that went back to the revolution of 1789. A stagnant population, a falling birth rate and a feeling of exhaustion also marked the postwar years. Across the Rhine, Germany watched and waited. Clemenceau died, and with him the fighting spirit. The government built the Maginot Line.

By contrast, the events in Washington seem unheard of. “Is this the beginning, or the end?” one commentator wondered. Since 1815, France has had a restoration, an empire, five republics and the Vichy state, each with a different constitution. Most of these changes in 1830, 1848, 1871 and 1945 were marked by violence. King Louis-Phillipe (1830-1848) went to bed every night with two loaded pistols on his bedside table. Is this our future?

The short-term reaction to Feb. 6 was the Popular Front government of Léon Blum in 1936. Blum was a socialist; for him socialism, besides higher wages and job security, meant the dignity of the factory worker. These new ideas offended the propertied classes, and Blum was once beaten up by right-wing hooligans. Some members of the upper bourgeoisie were heard to say that they would rather live under Hitler than Léon Blum, who was, after all, a Jew.

Is a retail credit card worth it?

The role household items should play in your life

The role household items should play in your life

PennyWise Episode 5: How to Prioritize Your Debt Payments

PennyWise Episode 5: How to Prioritize Your Debt Payments

I know that I am not the only parent who has asked themselves if they are giving their child what they need during this pandemic. To not only …

Supporters of President Donald Trump are confronted by U.S. Capitol Police officers outside the Senate Chamber inside the Capitol on Jan. 6 in Washington. An Arizona man seen in photos and video of the mob wearing a fur hat with horns was also charged Saturday in Wednesday's chaos. Jacob Anthony Chansley, who also goes by the name Jake Angeli, was taken into custody Jan. 9.