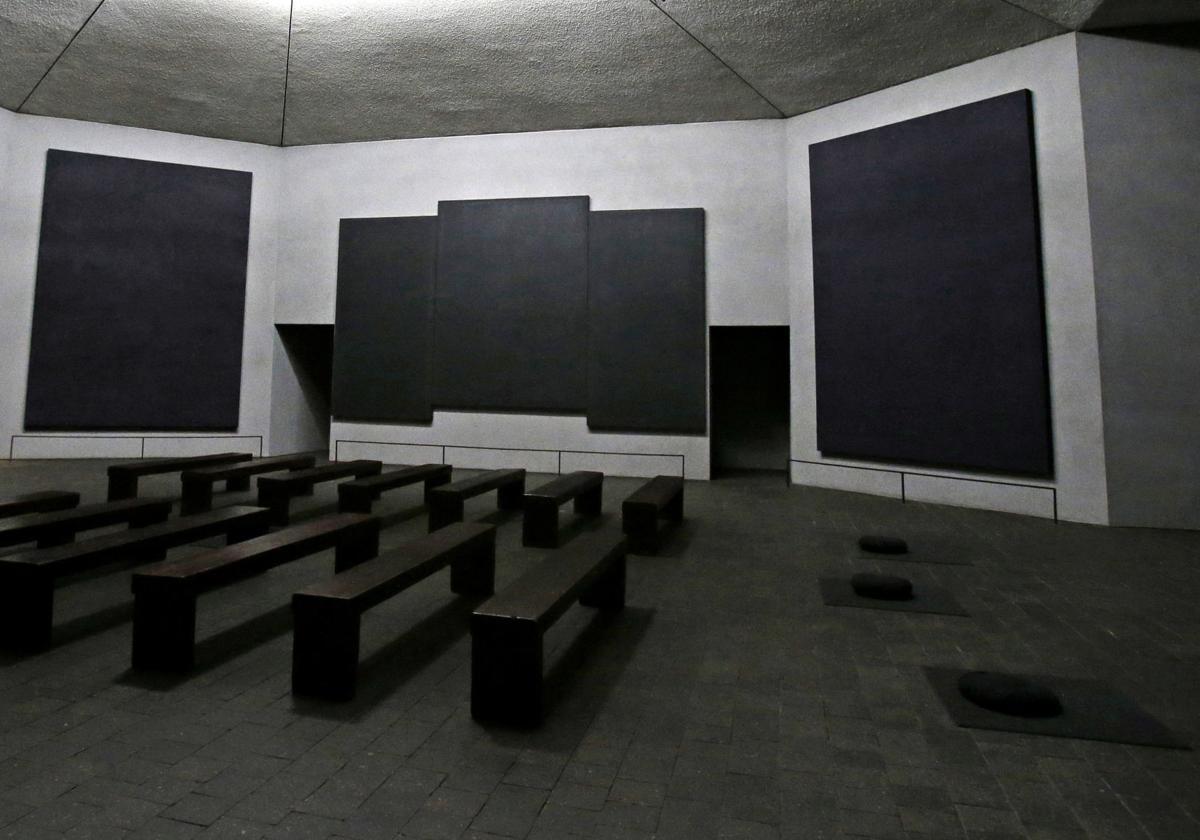 The benches and prayer stones in the Rothko Chapel in Houston. The modern work of religious art was commissioned by philanthropists Dominique and John de Menil in 1964 and American artist Mark Rothko was given the opportunity to shape the environment to encompass his work. He created 14 paintings specially for the meditative space.

Fans of the TV series "Mad Men" will remember the day when Bert Cooper, the advertising firm’s president, had a Mark Rothko painting hung in his office. It was a big painting, maybe 6 feet by 4, and had bright colors. It brightened up the office.

Rothko (1903-1970) was an American painter born in Latvia who came to this country at a young age. After World War II, along with Jackson Pollack and Franz Klein, he was an abstract expressionist painter who helped New York replace Paris as capital of the art world.

Abstract painting is not representational; it doesn’t act like a “window,” showing realistic scenes from life, like landscapes or portraits. A Pollack painting is usually very large, and features swirling, complicated patterns in several colors. Klein uses bold, black slashes of paint to get his effects, and Rothko is best known for large, rounded rectangles of color, usually bright, but often dark and shadowy. The big masses of color seem to hover in the air, like clouds.

Why did Bert choose a Rothko for his office? "Maybe you're just supposed to experience it," Bert said, evading the question. The canvas is decorative, but Rothko was aiming at more than mere decoration. Rothko said he was really painting emotions, and that his work had a spiritual dimension; it was meant to transport the viewer into ... a higher world.

The art critic Kenneth Clarke pronounced Pollack’s Number One “the quintessential American painting,” but that was years ago, and we take a more balanced view of the abstract expressionists today. But Rothko left behind him more than paintings. He left his Chapel in Houston, Texas, which has become for many people a site of pilgrimage.

The Chapel (opened in 1971) sits in a small park in front of a reflecting pool and the Barnet Newman sculpture, Broken Obelisk. It is an octagonal building of rose colored brick three stories high with a skylight like the one in Rothko’s New York City studio. The building succeeds in looking larger than it is, owing partly to the fact that it is basically empty most of the time.

There are no chairs, only some low wooden benches and hassocks. The building takes its character from the fourteen huge Rothko paintings that cover the walls. At first view some visitors are disappointed when they are greeted by somber canvasses of black, deep purple and dark blue. But these colors are consistent with the Newman sculpture outside: this is a place for remembering and grieving, and perhaps an encounter with something we call spirit.

Abstract paintings perhaps appeal more to the contemporary sensibility than marble statues or stained glass biblical illustrations might. They leave more to the imagination, and free the emotions from references that are too particular, too much of the material world. Up close they reveal subtleties of tone and texture invisible at a distance. People enter and walk around, sit and look and gather their thoughts and feelings. They go outside, and come back in again.

Sometimes a church is at its best when it is empty. Nothing has to go on in a church for it to a place for the spiritual. Ceremonies, sermons, hymns and coffee hours are fine, but churches can be a place of repose and meditation throughout the day.

I confess that I have never been to Houston. But in Paris we have stepped into St. Germain-in-the Fields in a very posh neighborhood at an odd hour. There were lots of chairs, but nothing going on. The walls in this 800-year old building are bare stone, and in one of them is the tomb of Rene Descartes, famous for saying, “I think, therefore I am.”

People drop in, put their shopping bags down, and sit quietly for a time. Traffic sounds are muffled. There are the gray stone walls, shadows, a bit of color from the windows. Announcements on a bulletin board indicate that there are many poor in this neighborhood. Here is respite from the busy world, perhaps comparable to what the Rothko Chapel has to offer.

Abstract art in churches began modestly in Willard Chapel in Auburn. In the Rothko Chapel it reaches full development. Rothko’s museum paintings will go out on display or back into storage, depending on the interests of the time. But in Houston his art in his chapel will continue to play a part in people’s spiritual lives.

Rossmann: Spirituality: Encounters with the divine

Nov. 1, 1755, was All Saints Day. In Lisbon, Portugal, the churches were full. People were in their finery. Thousands of candles had been ligh…

The benches and prayer stones in the Rothko Chapel in Houston. The modern work of religious art was commissioned by philanthropists Dominique and John de Menil in 1964 and American artist Mark Rothko was given the opportunity to shape the environment to encompass his work. He created 14 paintings specially for the meditative space.