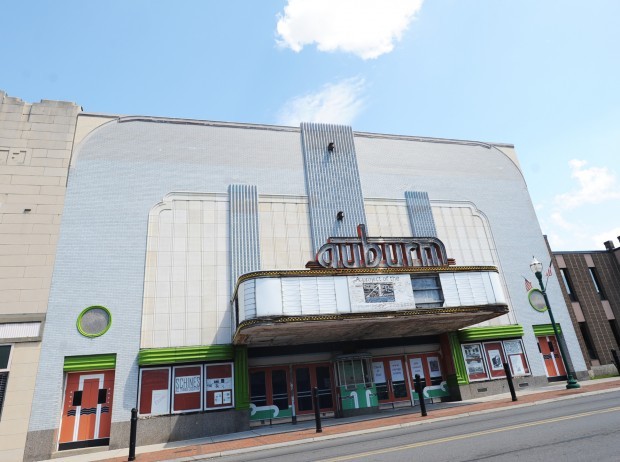 The Auburn Schines Theater is located at 12-14 South St., Auburn. 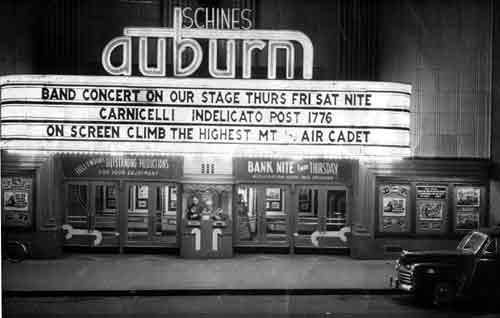 The Auburn Schines Theater originally featured the word "SCHINES" atop its marquee. 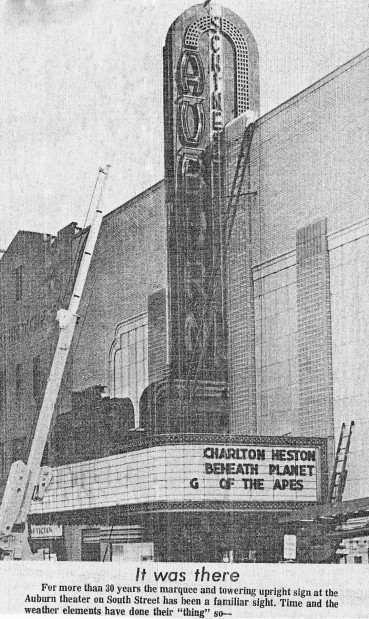 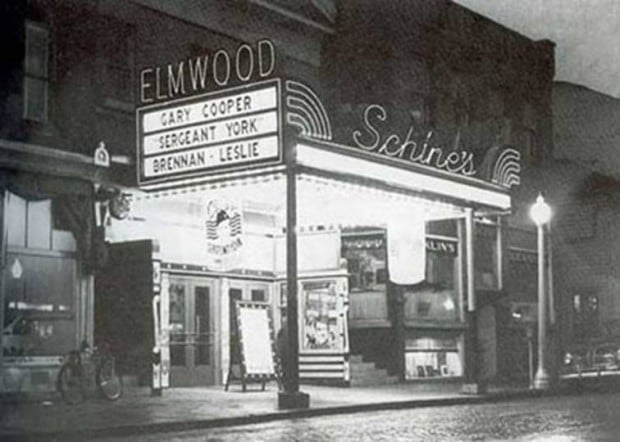 The Elmwood Theatre in Penn Yan, owned by the Schine family, featured the word "Schine's" atop its marquee. 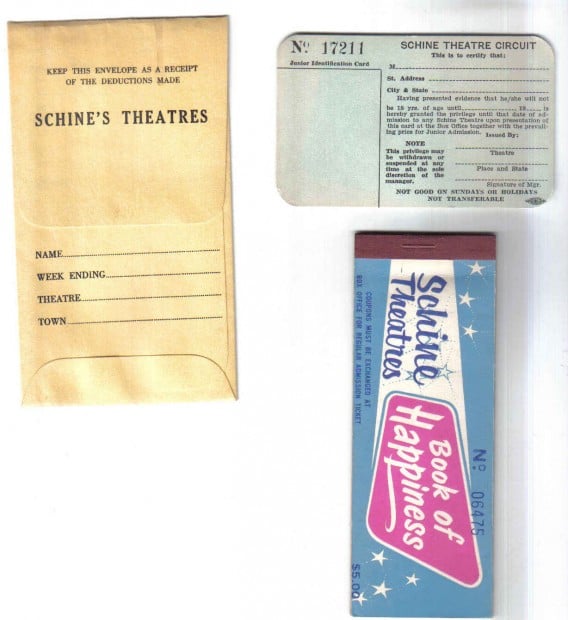 The names "Schine" and "Schine's" were used in materials referring to the Auburn Schines Theater during its days as a movie theater. 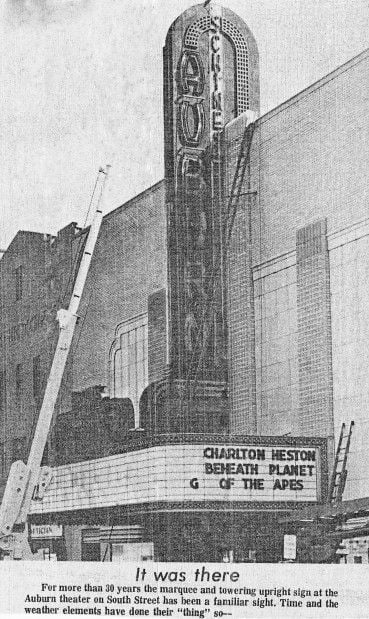 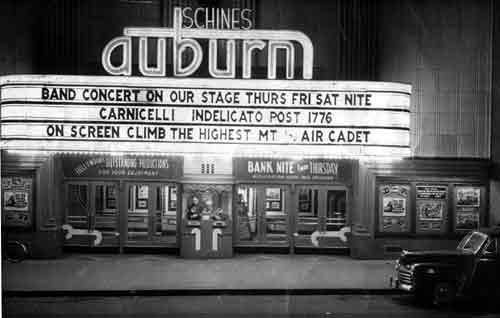 The Auburn Schine Theater originally featured the word "SCHINES" atop its marquee.

If you stare at an apostrophe, it kind of looks like a wedge.

In the case of the Auburn Schines Theater, the resemblance is appropriate.

Any debate over what should be done with the long-defunct downtown Auburn cinema typically includes another debate that's almost as spirited: What exactly is it called? Is it "Schine," "Schine's" or "Schines"? Is it "Theater" or "Theatre"? And where does "Auburn" go — in the beginning or the middle of the name, if anywhere?

The immediate answer to all these questions is "Auburn Schines Theater," because that's the name chosen by the Cayuga County Arts Council, the building's owner since 1998.

"The name 'Schines' (without the apostrophe) is our current branding of the project, under the concept 'All things creative,'" council member Collin Sullivan said in an email. "As with any re-branding, some people don't like it and stick to the older name."

The historical accuracy of that name is a much more complicated tale.

The blade was taken down in 1970 due to safety concerns, said Todd Gaglianese, an Auburn Schines Theater historian and former member of the Cayuga County Arts Council board. He's not so sure what year "SCHINES" was plucked from the marquee, but is certain it was between 1985 and 1993. Who's on First Video, which operated in the theater's front lobby for most of that time, at some point bartered the sign for electrical work, he said.

Still, pictures — and memories — of the signage continue to circulate. It's that entrenched visual that Schine advocates like Karen Colizzi Noonan are trying to correct. The theater's true name, the former Theatre Historical Society of America President insists, is "Schine" or "Schine's."

"It's a proper name," she said. "It's their actual family name."

All the confusion about the Auburn Schines Theater's name can thus be traced to one question: Why didn't the sign feature an apostrophe? Schine theater marquees in Geneva and Penn Yan did, Noonan said. Was the same punctuation in the lanky "SCHINES" lettering atop the Auburn theater's marquee beyond the capability of 1930s metalsmithing? Or was it just a grammatical oversight? Noonan isn't sure.

"I guess anything's possible," she said.

Gaglianese is also at a loss to explain the absent apostrophe.

"That is where all of the controversy comes from. The sign was incorrect," he said. "I think they didn't put one on because it would have been harder to build the sign."

When it comes to questions about the other two words in the theater's name, both Noonan and Gaglianese answer a little more amenably. It was common to place "Schine's" before the name of the city, Noonan said, but the style was so elastic that one group, Friends of Auburn Schine Theater, arrived at that usage just because it made a better acronym. And "Theater" and "Theatre," Gaglianese noted, have long been used interchangeably in the Auburn Schines' name.

However you say it, the name of the theater is not nearly as important an issue as its restoration, Noonan said.

"The real urgency is to get this project done," she said. "There's so many people watching and waiting for it to take its rightful place in Auburn."

When it comes to the Auburn Schines Theater, that's something people of all its grammatical persuasions can probably agree on.

The Cayuga County Arts Council has launched an Indiegogo campaign to raise money for maintenance on the exterior of the Auburn Schines Theater.

The group aims to raise $10,000 to fund the scraping and painting of the marquee, the replacement of missing panels on the marquee, and other miscellaneous touch-ups.

"This year marks the 75th anniversary of the Auburn Schines Theater," Cayuga County Arts Council board chair Jim Loperfido said in a news release. "Let's celebrate three-quarters of a century of this masterpiece by making it look its best."

The campaign runs through Sept. 27 and can be found at indiegogo.com/projects/auburn-schines-theater-marquee.

For more information about the Cayuga County Arts Council or the Auburn Schines Theater, visit cayugacountyartscouncil.com.

Another front in the Schines name battle

In 2000, two years after the Cayuga County Arts Council bought the Auburn Schines Theater, the group submitted the building for addition to the National Register of Historic Places as "Schines Auburn Theatre."

The theater was included in the register as such until December 2012, when its listing was officially changed to "Schine Auburn Theatre."

A representative at the New York State Historic Preservation Office said it suggested the change at the request of a historian — but couldn't recall their name.

Schine theater historian Karen Colizzi Noonan said she asked the office to make the change in September or October — but that she never received a response.

However it happened, the theater is now listed on the nation's highest record of historic places as "Schine Auburn Theatre."

The grimiest item in your kitchen you don't wash enough

The grimiest item in your kitchen you don't wash enough

Could jellyfish and chips be the next weird dish you try?

Could jellyfish and chips be the next weird dish you try?

Once a shining star itself, the Auburn Schines Theater attracted many celebrities to its 75th birthday party Sunday at Willard Memorial Chapel.

The Auburn Schines Theater is located at 12-14 South St., Auburn.

The Auburn Schines Theater originally featured the word "SCHINES" atop its marquee.

The Elmwood Theatre in Penn Yan, owned by the Schine family, featured the word "Schine's" atop its marquee.

The names "Schine" and "Schine's" were used in materials referring to the Auburn Schines Theater during its days as a movie theater.

The Auburn Schine Theater originally featured the word "SCHINES" atop its marquee.