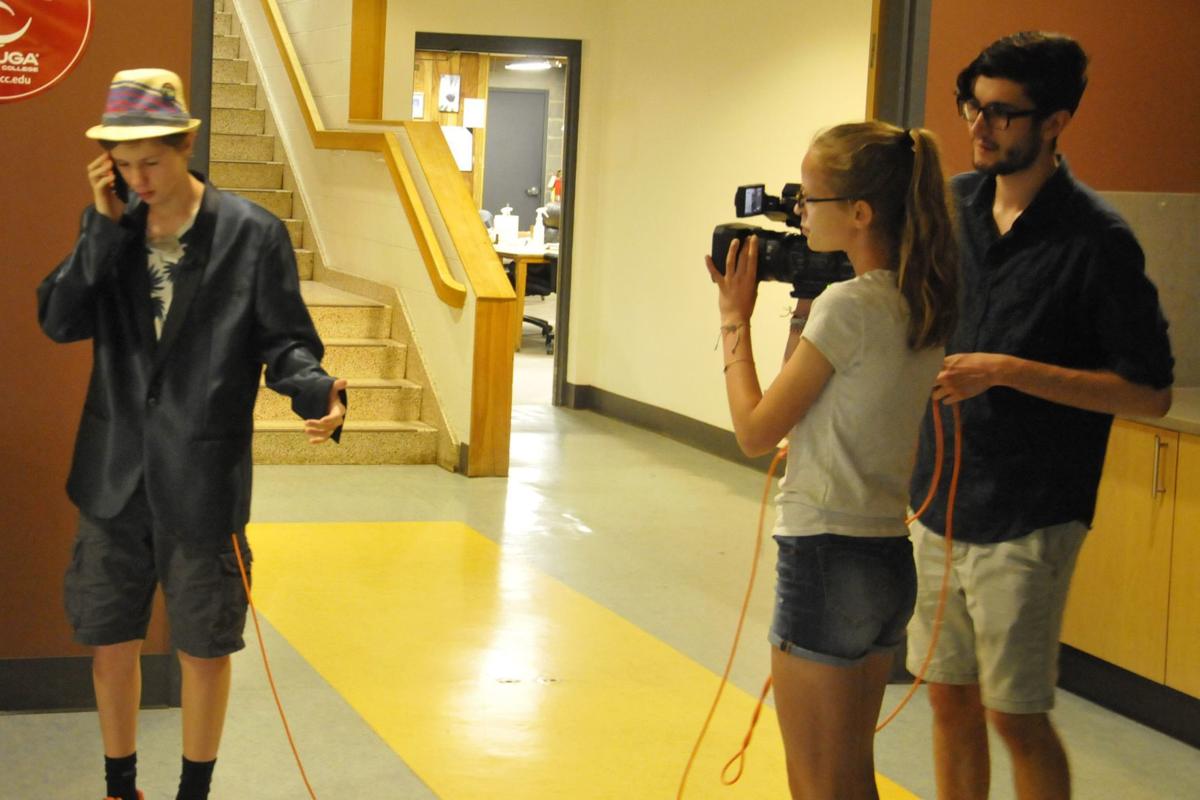 Errol Fern, left, Sophia Aureden and Teddy Brill shoot a scene for a short film July 17, 2019, at Cayuga Community College in Auburn. The project was part of a filmmaking camp offered by the college and Auburn Public Theater. 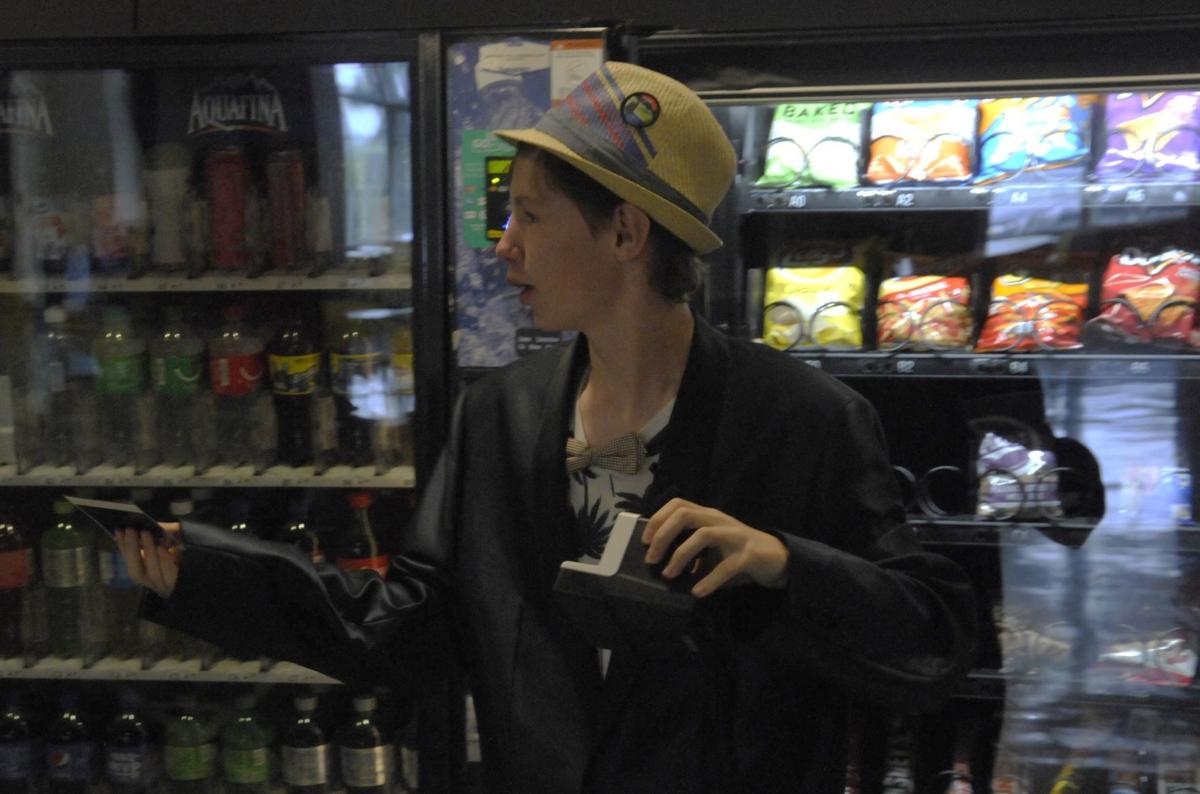 Errol Fern acts in a scene from a short film July 17 at Cayuga Community College in Auburn. The project was part of a filmmaking camp offered by the college and Auburn Public Theater. 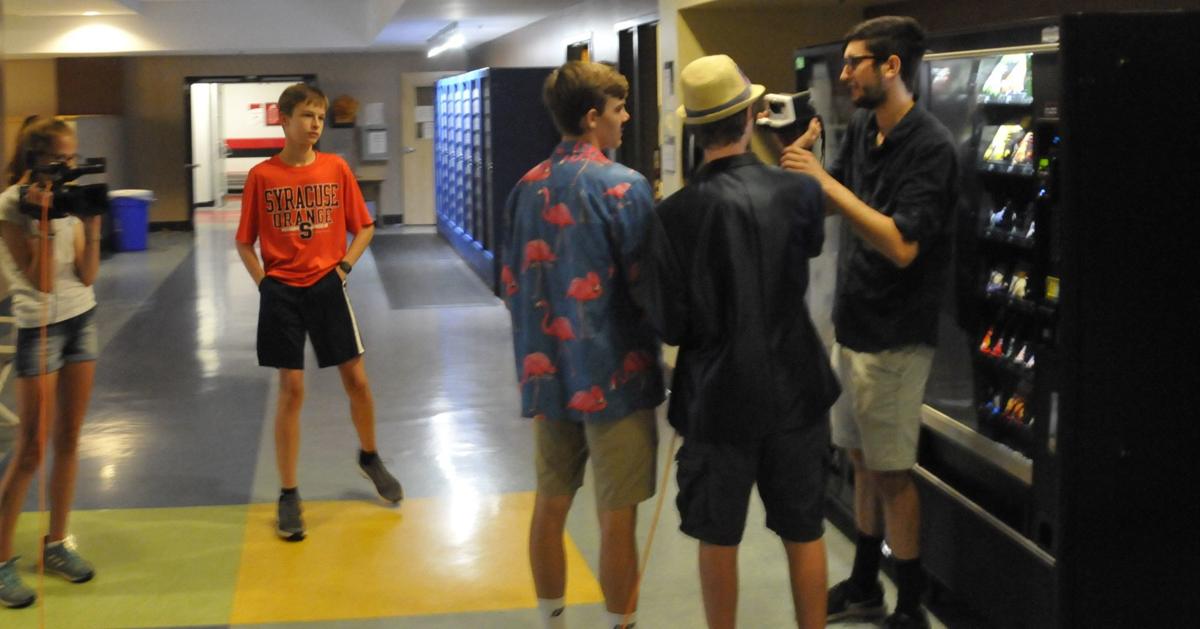 Students and teachers Teddy Brill, far right, discuss a scene for a short film July 17 at Cayuga Community College in Auburn. The project was part of a filmmaking camp offered by the college and Auburn Public Theater.

A group of aspiring auteurs scripted, shot and edited a short film in five days as a part of the Young Filmmakers Camp, a partnership between Auburn Public Theater and Cayuga Community College. The students were in a camp for high-schoolers July 15-19, while another 10 students were in a camp for middle-schoolers July 8-12. The students used the college's equipment to make their films.

One organizer for the camp was Carey Eidel, the theater's executive director, an instructor at CCC and an actor, writer and filmmaker with performing credits that include "The Lost World: Jurassic Park." He said the college's humanities division chair, Steve Keeler, helped develop the idea. Eidel said they both talked to state Department of Labor Commissioner Roberta Reardon and the Syracuse Film Office, among others, about crews increasingly filming in central New York in recent years. However, filmmakers coming to the area haven't been finding the crews they feel they need to grow the local industry, Eidel said.

The camps, Eidel said, provide central New York students a pathway into film production and firsthand experience with handling digital video cameras, lighting, directing, editing, scripting and the organization and logistics of filmmaking. He said the camps could spark the students' interest in continuing their filmmaking education, hopefully at Cayuga Community College, where they could earn a film production degree that would allow them to find jobs in the industry and stay in the area. Eidel said Keeler is developing a film production concentration at the college.

"In an overall sense, they're going to get a complete picture of what filmmaking is and what it takes to make a great film," Eidel said.

In the mornings at both camps, students learned about elements of filmmaking like editing, equipment and preproduction, or the planning required to make a film. Later in the day, they implemented those lessons. Eidel and other professionals, such as Auburn High School technology teacher Matt Drastal and Emmy Award-winning producer Erin McCormack, shared their knowledge with the students. Instructors Teddy Brill, Carmen Liberatore and Juliette Zygarowicz, all former students of Eidel's, were on hand as well. The films were screened on the last day of each camp.

The younger students from the first camp split into groups, resulting in two shorts — one a series of vignettes of film studio executives pitching ideas for a movie, and the other a "Christmas Carol"-style tale where a mean teacher learns the error of his ways with the help of a magical bathroom.

The film from the high-schoolers, which began shooting June 17 on the college's Auburn campus, was a mockumentary about an egoistical actor who secures a role in a commercial because he was the only one who auditioned. The students — Sophia Aureden, Everett Chambala, Errol Fern, Margaret Fudo and Aidan Ward — worked on a couple scenes with Brill, Liberatore and Zygarowicz late that morning. In one, the actor, played by Errol, 14, talked on a cellphone and tried to take a picture with a stranger with a Polaroid camera, which was played by Everett, 14, the short's director.

The group went over the scene a few times before shooting, and then shot multiple takes of the scene, working through small issues like Aidan's face not being visible in a shot or the camera getting moved during a scene. The students often avoided off-topic conversations while shooting. Sophie, 13, the director of photography, held the camera steady, though she later said she didn't have any prior camera experience. Shooting continued past noon, when the students were scheduled to take lunch, as they soldiered on for another 25 minutes.

Liberatore, 20, an aspiring filmmaker himself, said the students were focused, had great ideas and possessed good film instincts. Helping guide them, he said, allowed him to gain more experience with managing multiple people on a shoot.

"They know they want to add varied shots, they want interesting shots," Liberatore said. "All we're doing is we're giving them the tools and showing them how to use them and I feel like in their hearts they already know what they're doing."

During lunch, the students said they had a good time at the camp. Fern said he enjoyed portraying his character, adding that he often plays a comedic egoistical persona for his friends. Everett said he enjoyed the directorial process. And Aidan, 15, said he had some prior film experience, as he was involved in a short film on climate change with a filmmaking club at Skaneateles Middle School when he was in the sixth grade.

Margaret, 13, who worked as an assistant, said she enjoyed working with experienced instructors who could help the students improve their craft. She said she and her young crewmates became friends while tossing jokes around during the writing process, and added that their energy kept them going while working past the start of their lunch break.

An extended, multi-week version of the Young Filmmakers Camp is being planned for the fall. Scholarships are available for children who require financial assistance. For more information, contact Janie Micglire, Auburn Public Theater's director of operations, at (315) 253-6669 or janie@auburnpublictheater.org.

Inside the US federal prison hit hardest by Covid-19

Errol Fern, left, Sophia Aureden and Teddy Brill shoot a scene for a short film July 17, 2019, at Cayuga Community College in Auburn. The project was part of a filmmaking camp offered by the college and Auburn Public Theater.

Errol Fern acts in a scene from a short film July 17 at Cayuga Community College in Auburn. The project was part of a filmmaking camp offered by the college and Auburn Public Theater.

Students and teachers Teddy Brill, far right, discuss a scene for a short film July 17 at Cayuga Community College in Auburn. The project was part of a filmmaking camp offered by the college and Auburn Public Theater.