Become a Member
Read Today's E-edition
Share This
Southern Cayuga Conversations: Americans who tell the truth
Share this
1 of 3 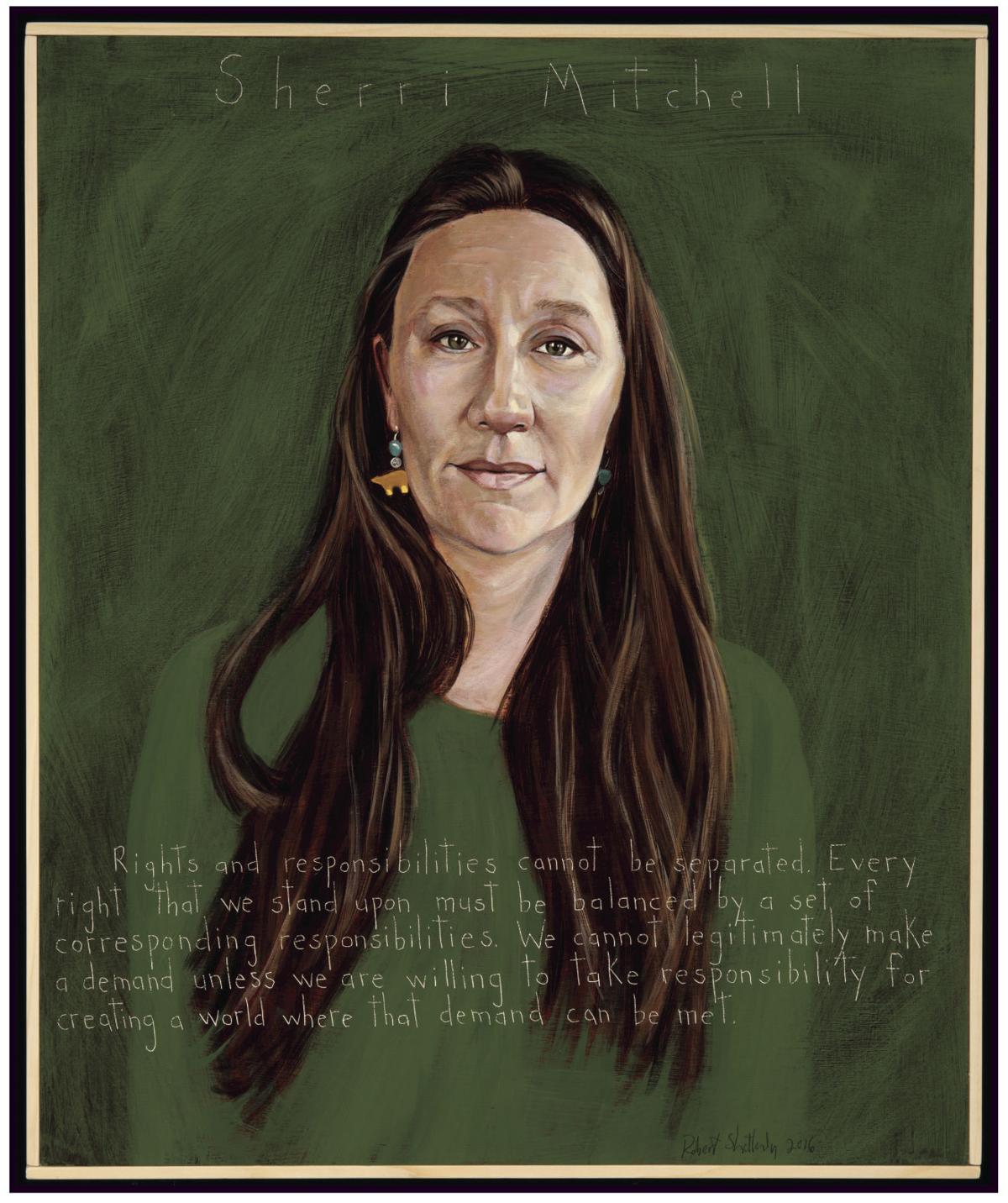 A portrait of Sherri Mitchell from the Americans Who Tell the Truth series. 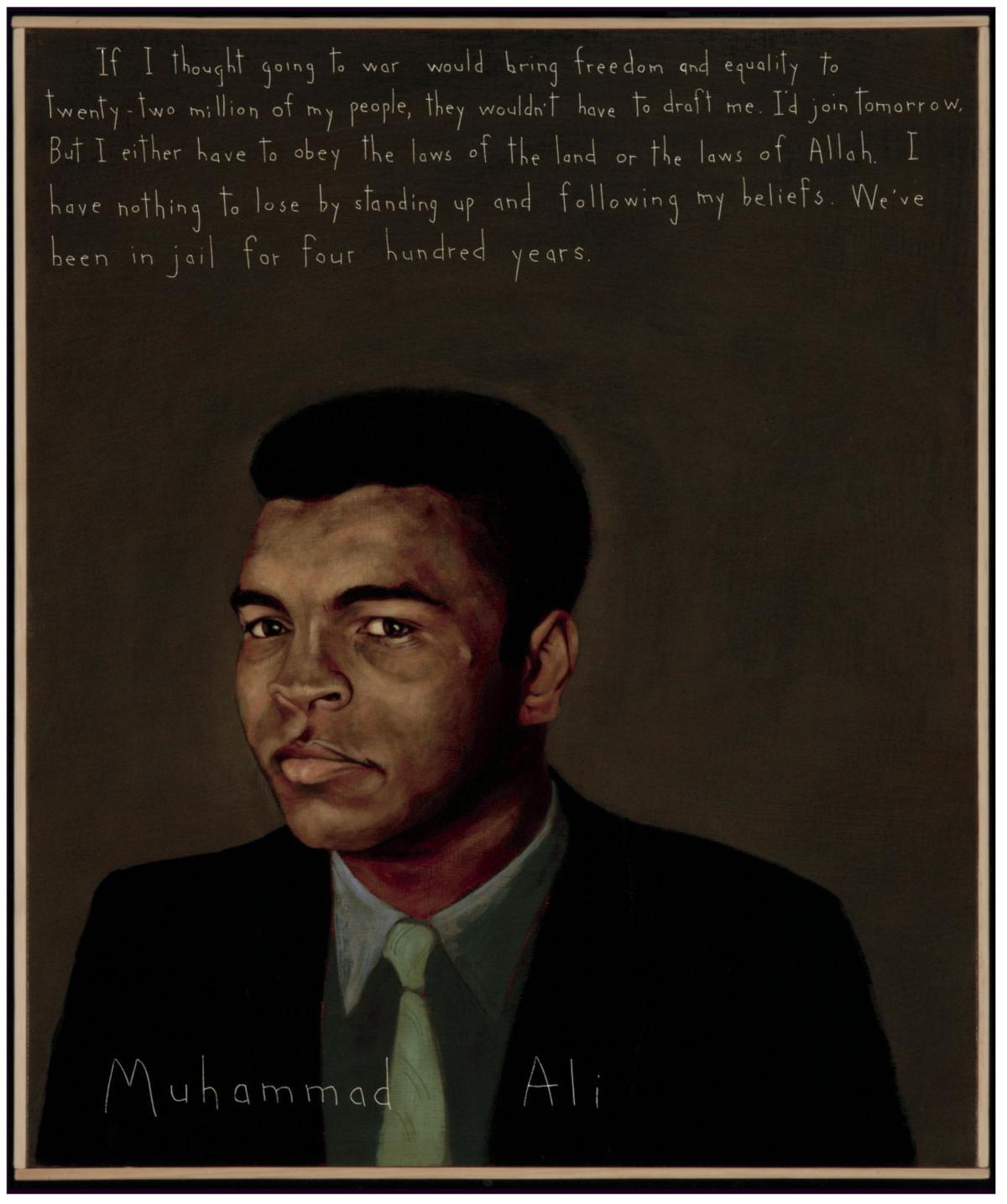 A portrait of Muhammad Ali from the Americans Who Tell the Truth series.

Our conversation begins as we gaze at the faces of 20 Americans painted by Robert Shetterly. The artist draws us into their thoughts and feelings by the contrast of the soft background with the intense texture of color and facial form. Some are familiar faces and some we do not know. Some speak to us individually because of their expression, their age, their gender or their race. As we approach them more closely, we hear them speak.

Muhammad Ali: "If I thought going to war would bring freedom and equality to 22 million of my people, they wouldn’t have to draft me."

Helen Keller: "When one comes to think of it, there are no such things as divine, immutable, or inalienable rights. Rights are things we get when we are strong enough to make good our claim on them."

Sherri Mitchell: "Rights and responsibilities cannot be separated. Every right that we stand upon must be balanced by a set of corresponding responsibilities. We cannot legitimately make a demand unless we are willing to take responsibility for creating a world were that demand can be met."

Ai-jen Poo: "The 21st century way to create social change is to determine where we can create win-win-win situations around our values. These values are simple: ensuring we can take care of ourselves, our families, or communities and future generations to come."

The portraits are displayed in the halls of the Southern Cayuga middle and high school, and were purchased by the Southern Cayuga Anne Frank Tree Project from Americans Who Tell the Truth. These portraits bring to our community American citizens who have courageously addressed issues of social, environmental and economic fairness. The Southern Cayuga Central School District and Anne Frank Tree Project share Americans Who Tell the Truth’s commitment to providing a variety of resources to inspire a new generation of engaged Americans who will act for the common good, our communities and the Earth.

Elishia Hoatland, Christine Bartolotta and Sarah Birmingham had the challenging task of selecting these 20 Americans from a group of 250: “We want our students able to meet people who empower them and help them find their voice,” Christine reflected. “We want them to expand their world through conversations with those from different races, places, times and purposes.”

Sarah added, “Our middle school students are struggling to find their identity and expand their vision and voice. They are bombarded with media that often drowns out the voices that will allow them to grow. We want them to see the world through a wider lens.”

Elishia and Bill Zimpfer nodded in agreement. “We were committed to diversity in our truth tellers.” Bill, Elishia, Christine and Sarah comprise the team that teaches English language and literature at the middle and high school. Elishia continued, “As English teachers, we are used to discussing the truth in the literature we study together. We explore different cultures in a wide range of print and media and notice both the uniqueness of various voices and the commonality of human goals and aspirations. We know people have the power to change themselves and their world.”

Bill Zimpfer, who is also the president of the Anne Frank Tree Project board, added, “The New York State Board of Regents and the New York State Department of Education is in the process of drafting diversity and inclusion standards. Americans Who Tell the Truth puts us ahead of the game in these critical educational goals.”

I had spoken with the artist Robert Shetterly by phone the day before my conversation with our teachers. He spoke about his intimate relationship with his art: “Art allows me to communicate with myself. I paint an image; the image then speaks back to me, informs me of ideas and concerns beyond what I knew I had. The painting becomes a tangible fact in the world whose reality tells its own story. If it tells that story to me, I’m confident it will speak to others.”

All of us who have stood before these portraits have heard the stories and long to continue our conversation. Robert promoted the use of the website, americanswhotellthetruth.org, by students and the community. I have made many trips to the website and have been changed by meeting new Americans who share my goals and challenge me to engage more courageously with the environment, community and social justice. I cannot wait to talk to students about their reaction to Americans Who Tell the Truth. The conversation is just beginning, and the table has many places for those from the past, present and future who are committed to our country and our world.

Watch Now: What is gender-creative parenting?

Watch Now: What is gender-creative parenting?

A portrait of Sherri Mitchell from the Americans Who Tell the Truth series.

A portrait of Muhammad Ali from the Americans Who Tell the Truth series.