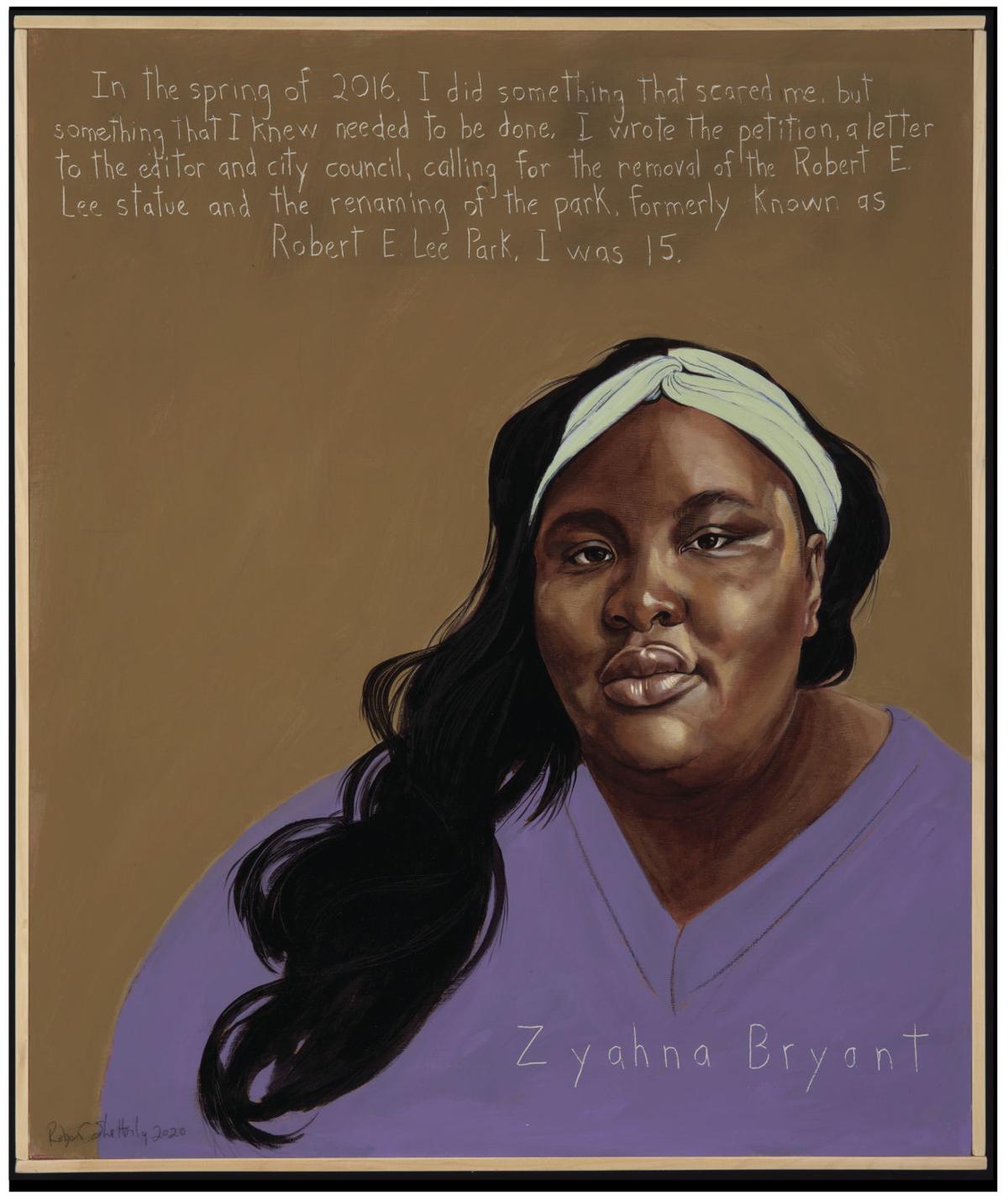 A portrait of Zyahana Bryant from the "Americans Who Tell the Truth" series by Robert Shetterly. 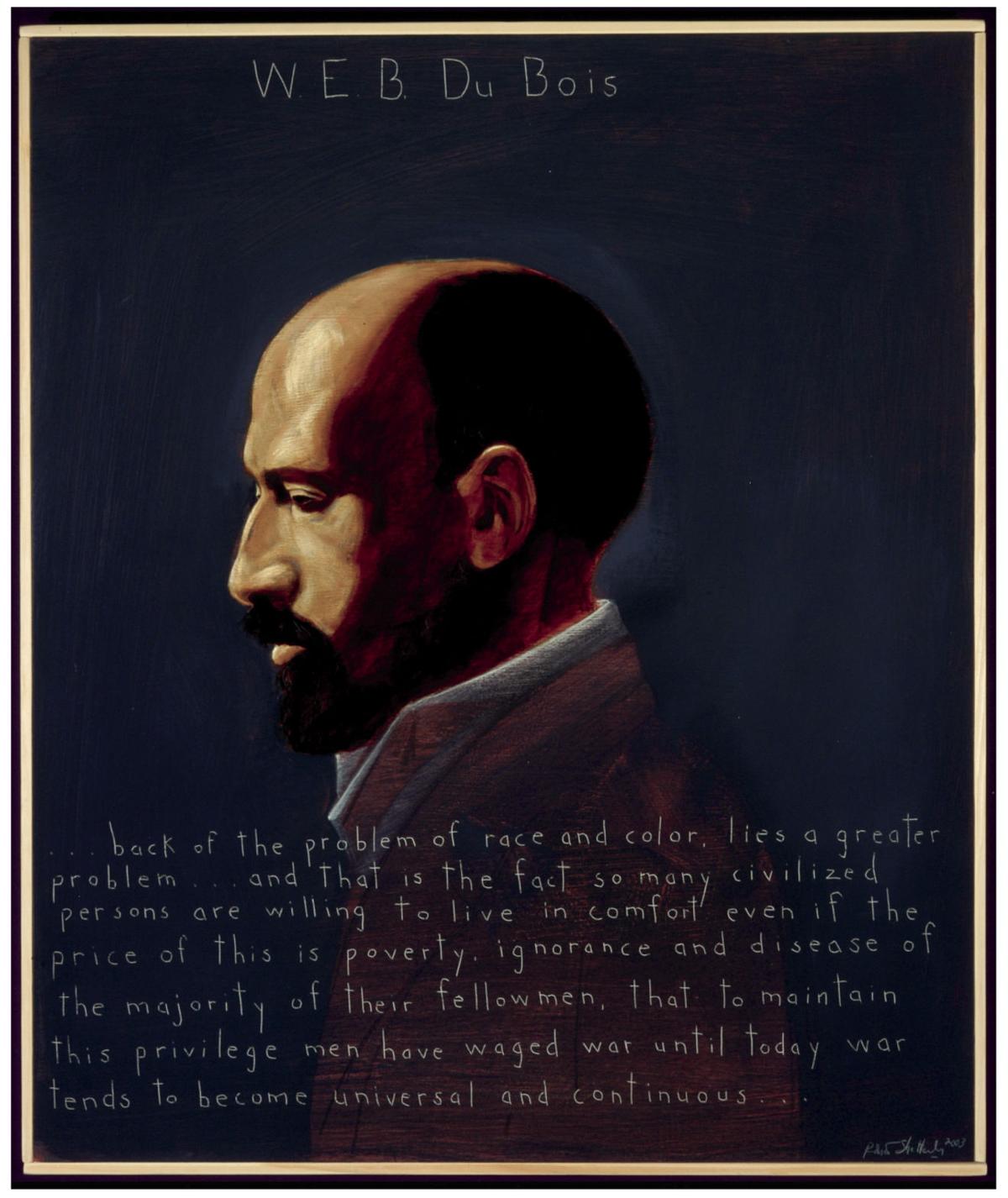 A portrait of W.E.B. DuBois from the "Americans Who Tell the Truth" series by Robert Shetterly.

Our conversations continue as more Southern Cayuga middle and high school students gaze at the faces of 20 Americans painted by Robert Shetterly. Journalism student Gesten Mahannah worked with his teacher Peter Bakija to create an exhibit video. To quote Peter, the portraits “are well done, respectful, and accurate but lightly expressionistic…I am so glad they are here.” Recent conversations with students and friends bring into focus some new portraits:

Shirley Chisholm: "Prejudice and hatred built the nation’s slums, maintains them and profits by them."

W.E.B. DuBois: "Back of the problem of race and color lies a greater problem ... and that is the fact so many civilized persons are willing to live in comfort even if the price of this is poverty, ignorance and disease of the majority of their fellowmen."

Langston Hughes: "We, the people, must redeem / The land, the mines, the plants, the rivers. / The mountains and the endless plain —/ All, all the stretch of these great green states —/ And make America again!"

I asked Shawn Redmond, Julia Gloss and Ben Stiadle what portrait caught their eye. Shawn replied, “W.E.B. DuBois caught my eye. The reason was I thought the name was very interesting.” Both Julia and Ben were captivated by Zyahana Bryant. Julia noted that “she looked so much younger than the other portraits.” Ben added, “Zyahna Bryant"s portrait in particular caught my attention, as it reminded that the fight for social equality is a constant battle. Despite being just 15 years of age, Bryant petitioned for the removal of a Charlottesville Robert E. Lee statue. The ideals of activism continue to pass down generationally and Bryant's story inspires anyone who believes their voice may be insignificant or ignored to speak up.”

We discussed the quotes included in each portrait. Shawn knew John Lewis for being a civil rights activist and was not surprised by the quote. Julia was surprised by Shirley Chisholm’s quote. “Although I knew her from my social studies class, I did not know she was involved in fighting poverty in America ... this added another really cool element to what I knew.”

Ben continued, “The most surprising quote came from poet Langston Hughes, whose words forced me to think. He challenged us to 'redeem' the natural qualities of America and avoid the detriments of 'graft, stealth, and lies.' I believe he encouraged America to reestablish the principles it was founded upon by following the golden rule: treat others as you would want to be treated."

The students then imagined a meeting with one of the truthful Americans. Shawn and Ben wanted to meet John Lewis. Shawn began, “I want to ask him how he got himself in the position he was in then. I want to know how he found the courage to do what he did and what were his greatest challenges and successes.” Ben continued, “I admire his patience and ability to nonviolently challenge systems of oppression. He rightfully questioned why our nation couldn’t serve its members equally and worked to ameliorate the issue through coordination and compromise.”

Julia returned to Zyahana Bryant for her imagined meeting: “I would like to know how she found the courage to organize a petition and go up against such a large force at such a young age. I want to know how her activism impacted her daily life and how she was able to organize a large movement.”

We reflected on possible lessons from spending time with the exhibit and website, americanswhotellthetruth.org. Shawn began, “The one thing I learned is don't be afraid to speak up. Speak up for what is right and what needs to be done, what you believe is going to be for the greater good and be beneficial for everybody.”

Julia continued, “This exhibit taught me that telling the truth can come in many shapes and forms and that anyone can choose to make a change regardless of their age, gender, religion or race.”

Ben concluded, “I learned you should never be afraid to exert boldness and stand up for what's right despite what others may think. While inspiring social change requires sacrifices, one must consider the long-term benefit of their efforts. These activists strived to improve the lives of individuals who had been neglected and mistreated for so long; it is time we reciprocate this behavior by seeing who we can uplift as well.”

Our conversation ended with Ben’s insight: “Given the abundance of historical figures commemorated across the region (Emily Howland, Anne Frank, Harriett Tubman etc.), it only made sense that Southern Cayuga would display these prominent leaders for all to see.”

OK. So technically, Owasco Lake didn’t flood during the week of Aug. 19. According to the National Weather Service, flood stage for the lake, …

A portrait of Zyahana Bryant from the "Americans Who Tell the Truth" series by Robert Shetterly.

A portrait of W.E.B. DuBois from the "Americans Who Tell the Truth" series by Robert Shetterly.