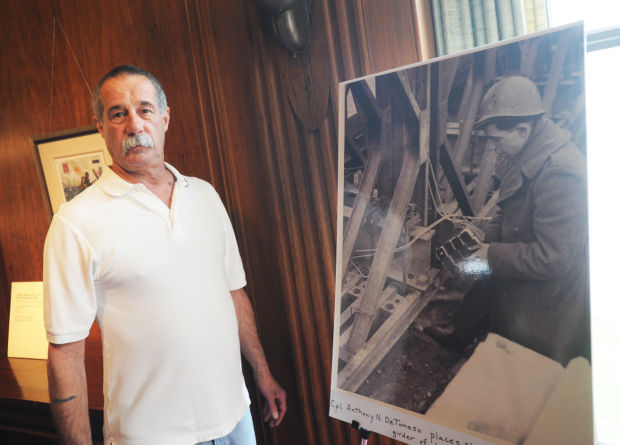 Bill DeTomaso stands beside an enlarged photograph of his father Col. Anthony DeTomaso who served in World War II at the Cayuga County Museum's exhibit Auburn at Normandy: The 299th Combat Engineers and Local Stories of World War II. 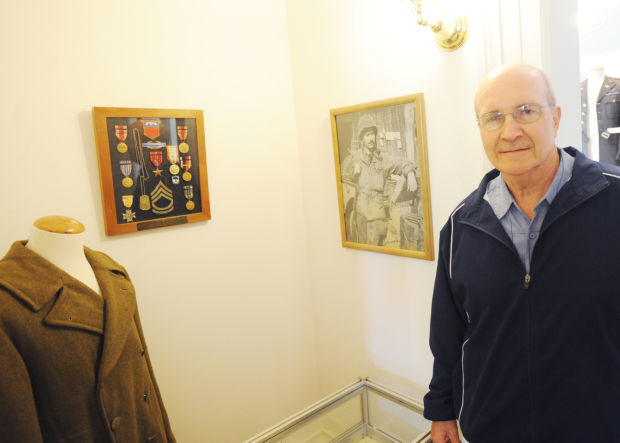 Felix Mucedola stands next to a photograph of his father Sgt. Frank Mucedola who served in World War II at the Cayuga County Museum's exhibit Auburn at Normandy: The 299th Combat Engineers and Local Stories of World War II.

AUBURN | The latest exhibit from the Cayuga Museum of History and Art comes 70 years after Americans historically stormed the beaches of Normandy during World War II.

The exhibit is titled "Auburn at Normandy: The 299th Combat Engineers and Local Stories from WWII." It opened May 23 after more than 40 local individuals and families rose to the occasion to provide the subject matter. The exhibit will remain open until Aug. 31.

While much of the support came from families, the exhibit is also bolstered through first-hand knowledge from several surviving WWII veterans, said Eileen McHugh, the museum's executive director. The exhibit features tales and authentic memorabilia from around the 1940s donated to the museum.

As part of the exhibit and in the spirit of the subject matter, the museum is also hosting a knitting drive, collecting hand-knit hats, scarves and mittens to be donated to the Red Cross.

Much of the exhibit focuses on the 299th Combat Engineers, a battalion that featured many Auburn soldiers who landed on the beaches of Normandy on D-Day. Organizers were keen to feature as much of the war's vast history as possible, linking local tales to many other points in history such as the Holocaust.

"To do WWII, we had to focus in the most part on the 299th because it's one of the biggest stories," McHugh said. "But we didn't want to leave out anyone."

In answering the museum's calls, families chose to dive into the histories of their relatives. Three sons shared their specific tales of their parents with The Citizen, and those tales are also featured parts of the museum's exhibit.

Anthony DeTomaso did not want people to forget the war. For them to forget was his biggest fear, according to his son, Bill.

An Auburn native, Anthony was a veteran of the war who has since passed away in 2011 at the age of 86. With his father's fear in mind, Bill said he chose to participate in the exhibit and honor his father's legacy.

"Dad used to tell me that when people forget, history has a way of repeating itself," Bill said.

His father's tales of WWII were not things Bill grew up with while he was raised in Auburn, he said. His father never talked about it with him, not until Bill was serving in the Vietnam War.

Much of what's left of Anthony's exploits were donated to the museum for the exhibit, including decommissioned equipment like a pistol and a hand grenade; several medals and various photos, including one of Anthony with State Sen. Michael Nozzolio, Bill said.

His voice quavering with emotion, Bill vowed to his father that those fears of would not be realized.

"I promised him that, as long as I'm around, that wouldn't happen," he said.

Along with capturing the war's vast history, reluctance was one of the challenges faced by the museum in organizing the exhibit, McHugh said.

"We found that that was very common," she said. "One man said, and this is just supposition, that his father just wanted to put that behind him."

Much of what Kevin found out was through his own inquisition. Both of his parents, Dr. Carlon H.M. Goodman and Evelyn B. Dickow, were involved in the conflict as enlisted medical personnel, and theirs is a wartime love story.

Both were natives of Cayuga County, but they actually met each other in Brooklyn at the U.S. Naval Hospital in around 1942. He was 39, while she was a 23-year-old nurse.

Kevin found out that his parents were stationed there together for about six months before their duties took them to other locations such as Seattle, Virginia, New Guinea, California and Guam.

Kevin said he had started searching through his parents' memorabilia last August, finding letters and musings from his mother indicating their relationship. "It just blew me away," he said.

When they were discharged in 1946, it wasn't long before the two were married. Carlon passed away in 1977 and Evelyn in 1996, but they both got to visit the sites of various concentration camps in 1974. The two made it a point to go there, Kevin said.

"They needed to see it for themselves."

Evelyn's musings are on display at the museum exhibit along with a copy of The Saturday Evening Post, in which she's featured as a model in an article comparing the women of the two World Wars. Along with the magazine, the exhibit also features a newspaper article from that time in which she is featured.

"She did a lot of promoting for the war effort," he said.

Born in Italy, Frank and his family immigrated to various parts of the United States before settling in Cayuga County around 1930, Felix said. When WWII escalated, Frank was asked if he would fight against his fellow Italians during the conflict. Frank agreed.

Unlike most it appears, Frank's wartime experience was shared with his family. His son said he is not sure if he was involved in D-Day.

He learned that his father had killed someone.

Felix said his father described his victim as a German soldier still in his teens, probably around 17 years old. He was rounding the corner of a barn in Germany before coming face-to-face with the soldier just feet apart with rifles in their hands.

For a moment, they both froze when they saw each other, Felix retells. The moment was fleeting, and Frank shot first with deadly precision.

The boy's face when he died remained with the elder Mucedola all the way to his deathbed, Felix said, which taught his son how war affects people.

Before he passed in 2007, Frank was a prominent accordionist who played as a part of the Mantovani Orchestra. An accordion of his is featured in the exhibit along with photos, medals — including a bronze star — several pieces of equipment and a German air raid siren, among others.

Among the equipment is a heavy coat and fur-lined goggles, showcasing the time of climates the soldiers had to fight in, McHugh said.

"The things he loaned to the exhibit are good examples of how objects can serve to tell the story," she said.

WHAT: Auburn at Normandy: The 299th Combat Engineers and Local Stories of World War II

WHERE: Cayuga Museum of History and Art, 203 Genesee St., Auburn

WHERE: Cayuga Museum of History and Art

AUBURN | There was a lot of ground to cover, but U.S. Rep. Dan Maffei made the most of his First Friday experience.

Bill DeTomaso stands beside an enlarged photograph of his father Col. Anthony DeTomaso who served in World War II at the Cayuga County Museum's exhibit Auburn at Normandy: The 299th Combat Engineers and Local Stories of World War II.

Felix Mucedola stands next to a photograph of his father Sgt. Frank Mucedola who served in World War II at the Cayuga County Museum's exhibit Auburn at Normandy: The 299th Combat Engineers and Local Stories of World War II.