Wild-card weekend: Updates and scores from the NFL playoffs

From left, Morley Schloss and Zen Holmes practice yoga Wednesday at the North-East Naturist Festival at in Summer Hill. 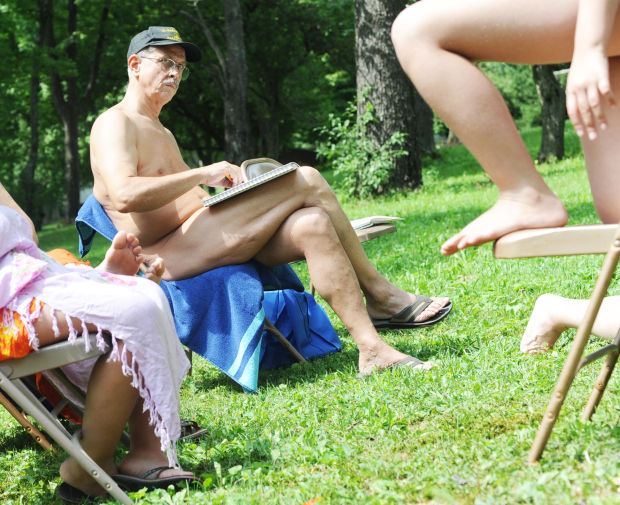 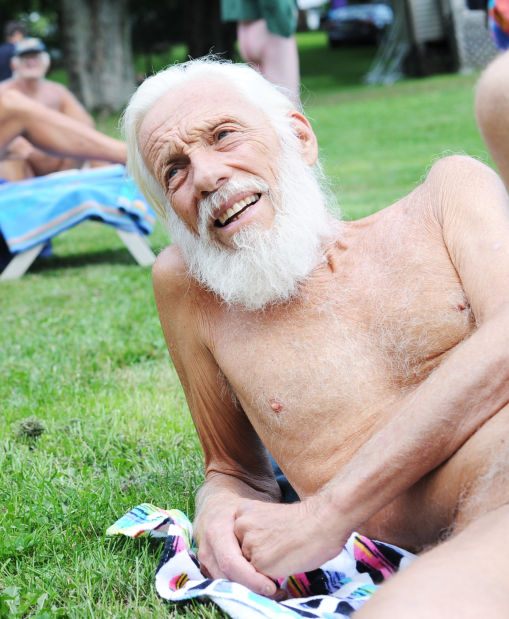 Morley Schloss talks with other naturists Wednesday at the Northeast Naturist Festival at Empire Haven Nudist Park in Summerhill. 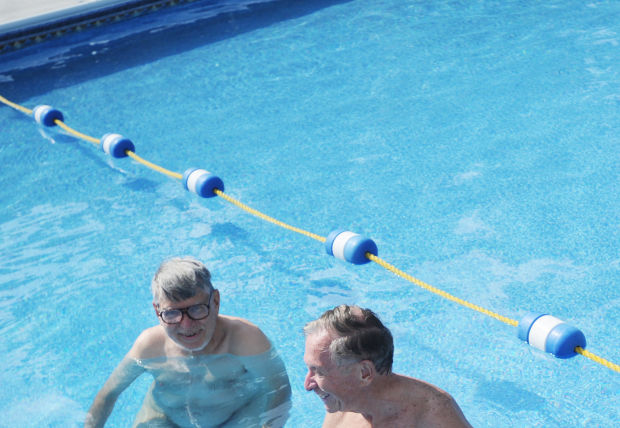 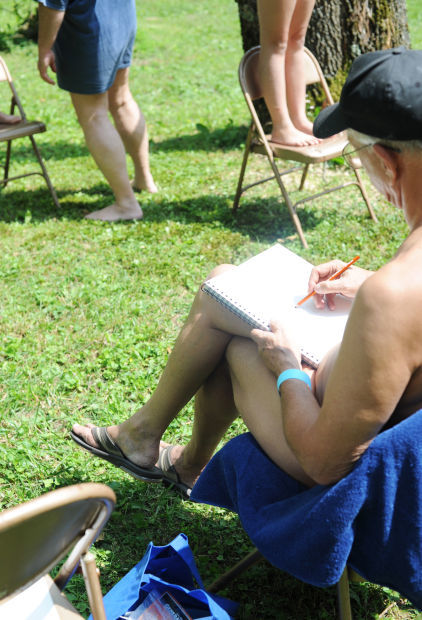 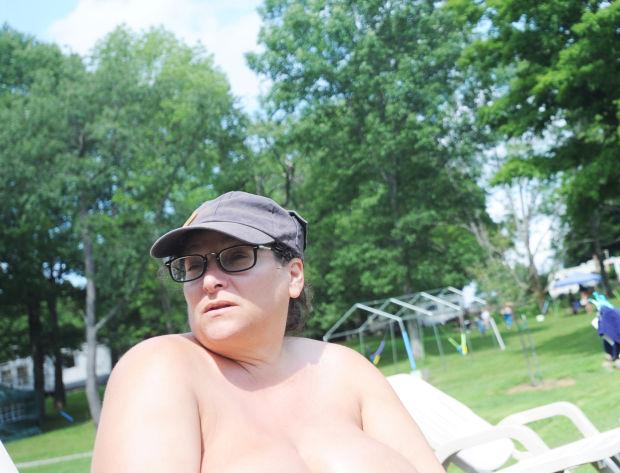 Susan Rothberg talks with other naturists Wednesday at the Northeast Naturist Festival at Empire Haven Nudist Park in Summerhill. 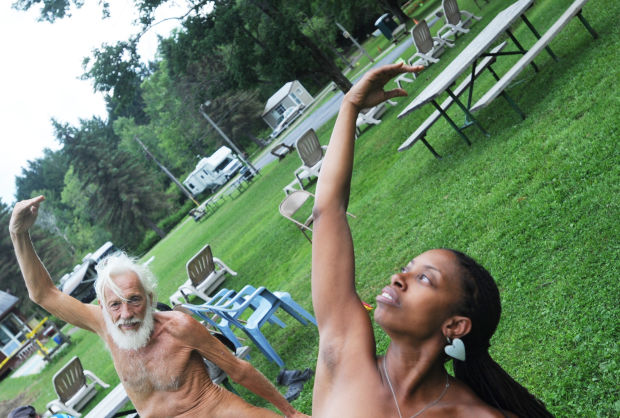 SUMMERHILL | The first time Morley Schloss got naked in public, it was out of necessity.

It was 1969, and Schloss had been enjoying Woodstock from a makeshift seat on a rain-slicked, muddy hill. Without a change of clothes or a private place to shower, the then-28-year-old Rochester man only saw one way to get clean: Skinny-dipping.

So Schloss, in full view of other festival attendees, shucked off his muddy clothes and waded naked into a Bethel pond.

"It felt so good to get out and feel the sun and water on me," he said. "It was such a freeing experience, the freedom and the growth of it."

Schloss fell irrevocably in love with the feeling of having no barriers between himself and nature. Hungry to retain his newly found freedom, Schloss ventured to a library after Woodstock and researched nudism.

Now, 45 years later, Schloss — wearing nothing but a wedding band and a smile — stands on a grassy hill at Empire Haven Nudist Park and explains that nudism has become a way of life.

Nudism, commonly called "naturism" by practitioners, is the practice of experiencing the world without clothing, particularly in social settings. Among those who get naked in public, nudism can range from a lifestyle to an activity confined to beaches.

But because it's generally illegal in the United States to bare it all in public, naturists often congregate on private campgrounds and beaches specifically created for nude social interactions.

One of those sanctuaries exists in Summerhill.

Created in 1959, Empire Haven Nudist Park provides naturists with 97 acres of private land dotted with rental units and tent sites. It prides itself on offering a family-friendly environment, complete with hiking trails, a pool and a volleyball court.

In sum, Empire Haven is like any other American campground. Its campers just happen to be nude.

Last Wednesday, on the second day of its annual Northeast Naturist Festival, Empire Haven was abuzz with activity.

Around 2:30 p.m., a caravan of cars returning from a hike to a popular skinny-dipping site in Ithaca pulled into the gated campground's parking lot. After parking, the campers stepped out of their vehicles, took off their clothes and dispersed.

But aside from the drum circles, health talks and art classes, the people are what make the Northeast Naturist Festival so unique.

At Empire Haven — and other nude-friendly places — Schloss said attendees enjoy a community where all shapes and sizes are accepted. Nudists learn to be comfortable wearing only their own skin, he explained, and feel confident enough to be wholly themselves without needing to cover up.

Schloss said children who grow up in naturist families learn not be ashamed of their bodies and get accustomed to the way humans physically change as they age. That exposure, he said, allows children to transition from adolescence into adulthood without many of the insecurities present in their non-nudist peers.

In an age where eating disorders are disturbingly common, Schloss said that confidence — that acceptance — is vital.

Susan Rothberg, of Long Island, stretched out her limbs while sunbathing, reaching out as if to catch as much sun as possible. And considering she was nude — save a baseball cap, black-rimmed glasses and sandals — her chances of tanning appeared good.

After Schloss laid his beach towel on the grass next to her, Rothberg smiled and recalled her first real nudist experience.

It was around 1995, and she was dating a man who suggested they spend a day at Lighthouse Beach, a partially clothing-optional beach in Islip.

When they first stepped onto the beach, Rothberg slowly waded into the naturist community — at first pulling the top of her black, one-piece bathing suit down to her waist. Then, after eventually summoning her courage, she ditched the entire suit.

"I took it off and the world didn't stop spinning," she said. "OK, naked bodies. Who cares?"

As she started to make places like Lighthouse Beach and the Northeast Naturist Festival a regular part of her life, Rothberg started to notice a mental shift: She no longer hated her body.

"Here, nobody has a problem that I'm over 50 and fat. Nobody minds," she said with a laugh. "I can accept it. It's body acceptance."

After learning to accept their bodies — scars, stretch marks, blemishes and warts — Rothberg said naturists focus on what exists in their fellow naturists' brains. And that, she argued, is at the heart of naturism: Loving a person for their naked soul.

"You remove more than your clothes," she said. "You remove the veneer you put out to the public, and there you are."

According to the Naturist Education Foundation, a 2006 poll conducted by Roper gauged Americans' perspectives on nudity. Here are some of the results:

• 74 percent of respondents believe people should be able to sunbathe nude without interference at accepted, designated beaches

The Citizen's most-read feature stories of 2014 include our introduction to Jenna Hinman's story, memories of Tinkers Guild shortly after it b…

From left, Morley Schloss and Zen Holmes practice yoga Wednesday at the North-East Naturist Festival at in Summer Hill.

Morley Schloss talks with other naturists Wednesday at the Northeast Naturist Festival at Empire Haven Nudist Park in Summerhill.

Susan Rothberg talks with other naturists Wednesday at the Northeast Naturist Festival at Empire Haven Nudist Park in Summerhill.