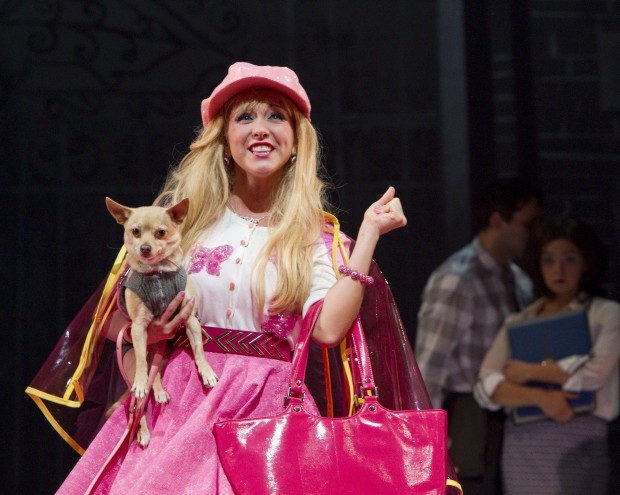 Libby Servais and Chico star in "Legally Blonde: The Musical," presented by the Finger Lakes Musical Theatre Festival at the Merry-Go-Round Playhouse through July 17. 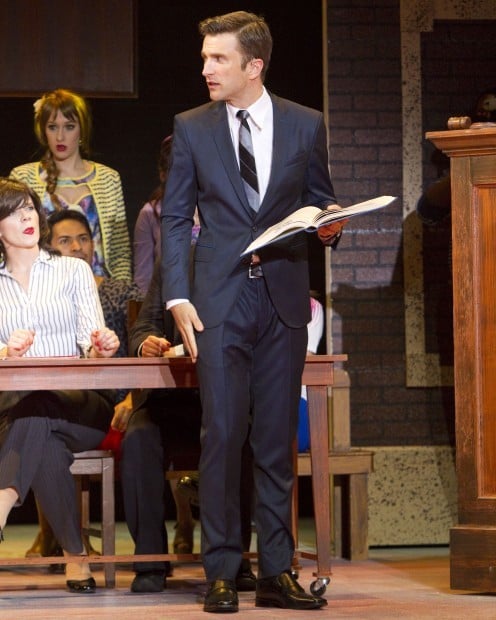 M. Scott McLean stars in "Legally Blonde: The Musical," presented by the Finger Lakes Musical Theatre Festival at the Merry-Go-Round Playhouse through July 17.

"Legally Blonde: The Musical" is a show of firsts for the Merry-Go-Round Playhouse.

Most will notice that it's the Owasco theater's first show to feature not one, but two dogs. The opening night audience sure did — every pattering step chihuahua Bruiser and bulldog Rufus took across the stage was met with adoring murmurs.

But it's also the first show that features Libby Servais and M. Scott McLean. And that's the important milestone here. Not even a pair of cute pups can steal the show from this talented lead duo. Both performers magnetize a stunning Finger Lakes Musical Theatre Festival production with first-rate timing and naturalness, and together they guide the show out of the shadow of its popular 2001 source film. Reese Witherspoon and Luke Wilson will be a distant memory.

Servais is Elle Woods, a UCLA fashion merchandising major and sorority president who's pretty in pink — and proud. But her cozy world's destroyed when her boyfriend, Warner (Todd Adamson), decides he wants a "Jackie" instead of Woods' "Marilyn," and dumps her. So Woods follows Warner to Harvard Law School, winning her admission with a surrealist song-and-dance essay aided by her hyperactive Greek chorus (Amanda LaMotte, Kira Josephson and Katie Quigley). In between the prejudiced cracks of fellow classmates (Leslie McDonel, Molly Jean Blodgett) and the hard lessons of professor Callahan (Christopher Carl), Woods finds a friend in Callahan's assistant, Emmett Forrest (McLean).

As Forrest brings the bookworm out of Woods and she brings the Brooks Brothers into his closet, Servais and McLean delight with every little thing they do. On the many keys of Woods' character — smarts, bubbliness, sexuality — she's a maestro. And McLean, his character caught between ambition and affection, wears the conflict with a masterful degree of nuance in vocal and facial expression. His is one of the playhouse's finest pure acting performances in years.

The show's average humor could fall flat in the hands of many performers, but Servais, McLean and the rest of the playhouse's "Legally Blonde" cast turn every silly line into a laugh. Carl and Adamson are robust support, and Steph Wilberding charms as hairdresser Paulette, who gives Elle some random Irish cultural appreciation in exchange for advice on landing BJ Gruber's brilliantly bozo UPS guy, Kyle. And as Brooke Wyndham, a fitness mogul and accused murderer whom Callahan and his students must defend, Jennifer Byrne is terrific comedic support. But she's not just that — Byrne also anchors the show's most impressive dance number, "Whipped Into Shape," which climaxes with Byrne belting as she jumps rope at maniacal speed.

The music of "Legally Blonde" isn't terribly memorable, but that's not to say the playhouse cast doesn't do it all the justice they can — particularly Wilberding, whose "Ireland" marks the best song in the show. The theater's crew turns in another amazing array of sets and costumes, depicting the turn of the most recent century in all its midriff-baring glory and seamlessly moving from Harvard to prison to Paulette's salon and back.

It's the people, though, who make the Merry-Go-Round Playhouse's "Legally Blonde" a bombshell of a musical.

WHAT: "Legally Blonde: The Musical"

WHEN: Continues through July 17

It’s that enchanting time of year when leaves start turning, chrysanthemums adorn porches, and the smell of sweet pumpkin spice fills the air.…

"Shop, donate and volunteer" sum up the many facets of the Friends of Hospice Thrift Shop and Boutique once located inside the Willard Memoria…

Bauso: Montessori and the normalized child

Diane Bauso, head of school for Creative Minds Montessori School in Auburn, writes about what's new there and how it relates to the Montessori method of education.

The Owasco Lake watershed is a 208-square-mile area that is home to a variety of families, farms, businesses and unique establishments. Our wa…

Miami mayor questions if Florida is ready for Phase 3

Miami mayor questions if Florida is ready for Phase 3

The most common mistakes made when dieting

The most common mistakes made when dieting

Libby Servais and Chico star in "Legally Blonde: The Musical," presented by the Finger Lakes Musical Theatre Festival at the Merry-Go-Round Playhouse through July 17.

M. Scott McLean stars in "Legally Blonde: The Musical," presented by the Finger Lakes Musical Theatre Festival at the Merry-Go-Round Playhouse through July 17.