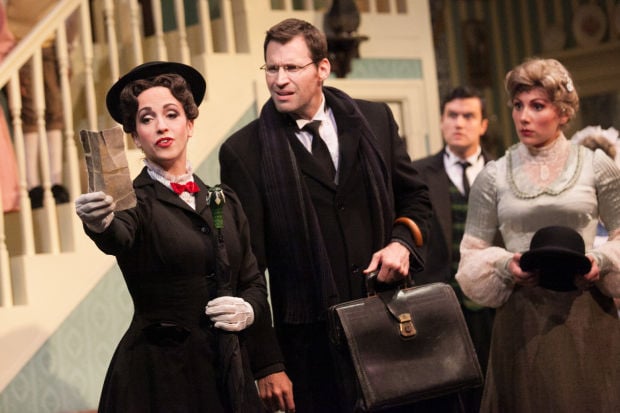 Mary Poppins (Elizabeth Earley) reads an “advertisement” looking for a new nanny for the Banks family to Mr. (Patrick Oliver Jones) and Mrs. Banks (Lucy Horton) in "Mary Poppins" at the Merry-Go-Round Playhouse in Owasco. 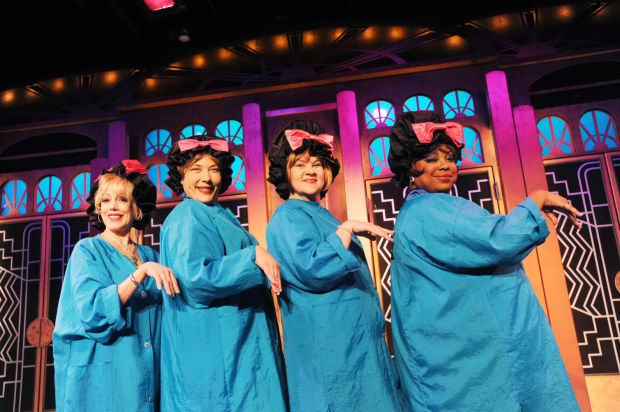 No less should be expected from the final show to be produced under Ed Sayles' 30-plus-year tenure at the helm of the Owasco theater.

Still, it's an astonishing feat, the way Sayles directs and Brian Collier choreographs the mammoth cast of Bankses and chimney sweeps through blitzes of dance and color like "Supercalifragilisticexpialidocious" and "Step in Time."

The former highlights the second act with hypnotic ensemble letter miming by a spectrum of shop patrons at maddening speed; the latter simulates rooftop acrobatics with so impressive an amount of collaboration and crescendo that, for a second at least, you'll be tricked into fearing they fall.

Much credit also goes to Elizabeth Early, who as Mary inhabits the role with otherworldly presence. It's nothing short of amazing she maintains that aura on "Practically Perfect" as she sings, speaks and negotiates extendable trick props from her bag.

Eric Coles as Bert is similarly deft, impressively easing out of his character's distinct Cockney accent and into his recurring "Chim Chim" numbers.

Patrick Oliver Jones delivers just the right amount of patriarchal sternness to supply the story some tension as George Banks — especially when a moment of conscientious work threatens his family's livelihood.

As his wife, Winifred, Lucy Horton is the heart of the show, perfectly conveying the conflict of being a former actress now consigned to be Mrs. George and nothing more.

Children Jane (Shannon Beel) and Michael (Seamus Finnian Gailor) are also bright spots, hitting excellently all the notes of defiance and affection that seize them as Mary becomes their first nanny that isn't entirely dreadful.

Tying the fantastic choreography and performances together is first-rate production, from the aforementioned props and Mary's "flights" in and out of the Banks' lives to a monster of a two-floor set that'll give you the dizzies as it dollies in and out of center stage.

But maybe such towering works of musical theater are supposed to come with a sense of vertigo.

"Menopause: The Musical" at Merry-Go-Round Downtown at Auburn Public Theater is one of those Finger Lakes Musical Theatre Festival shows where I have to defer to the audience.

Personally, I wasn't falling out of my chair with laughter, but I was nonetheless impressed with this expertly staged four-woman musical.

The crew of Professional Woman (Fredena J. Williams), Soap Star (Cherie Price), Earth Mother (Becca McCoy) and Iowa Housewife (Teri Adams) sure is a motley one, but each shares with winning sincerity their experience of the womanly change over Bloomingdale's specials and a clever collection of pop music send-ups.

Each actress has her moments, whether it's Price shamelessly flirting with older audience members or McCoy hinting at her more colorful sexual history, Williams tearing the house down in the dress of a certain legendary diva or Adams contorting herself into undersized lingerie.

But the best moments come when the four women come together, relating their unique experiences of something that not only they share, but many in the show's audience have and will share as well.

WHEN: Continues through July 2

WHAT: "Menopause the Musical"

WHEN: Continues through Aug. 9

The typical Merry-Go-Round Playhouse season is sort of like a batting order.

In staging "Mary Poppins," the Merry-Go-Round Playhouse took inspiration from the show's most famous word.

OWASCO | Ed Sayles is looking forward to spending more time with his other family.

Dr. Birx: Masks can be a fashion statement

Mary Poppins (Elizabeth Earley) reads an “advertisement” looking for a new nanny for the Banks family to Mr. (Patrick Oliver Jones) and Mrs. Banks (Lucy Horton) in "Mary Poppins" at the Merry-Go-Round Playhouse in Owasco.