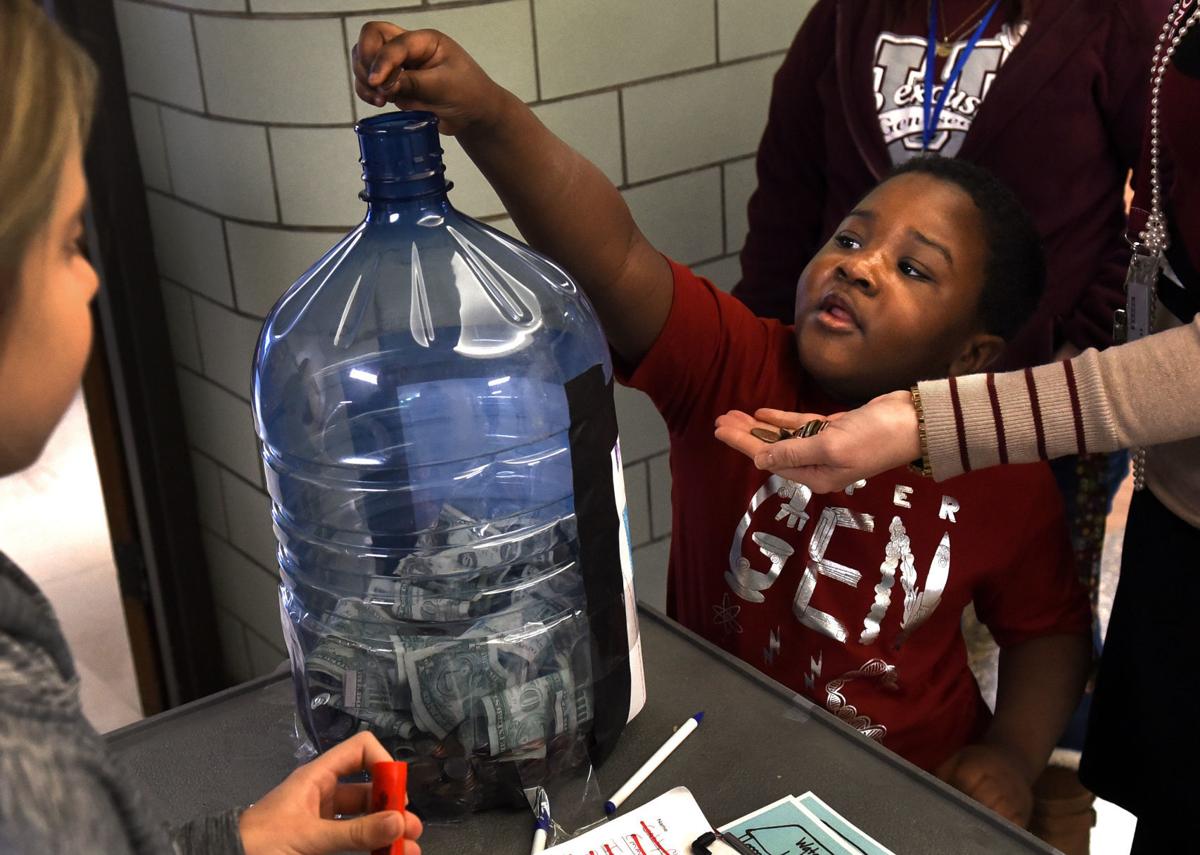 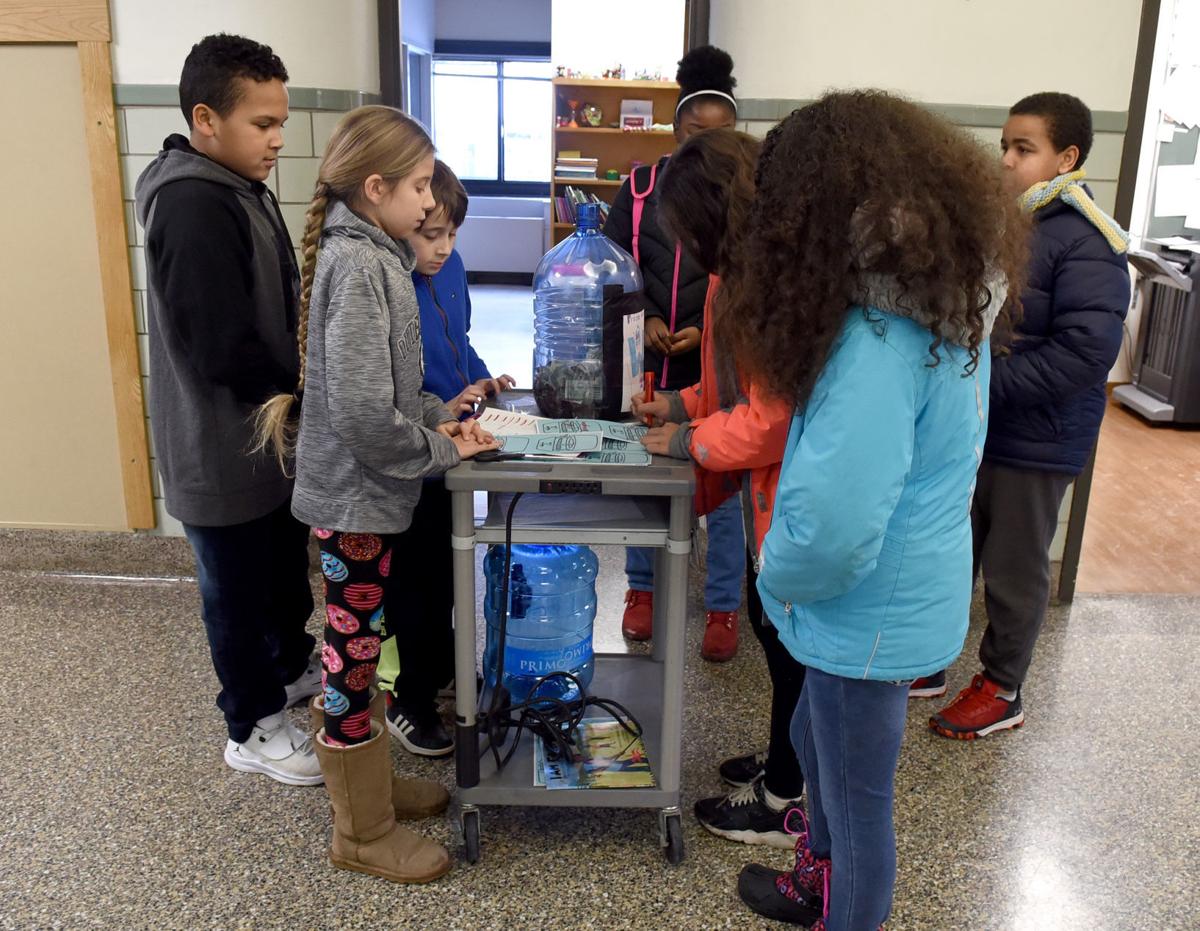 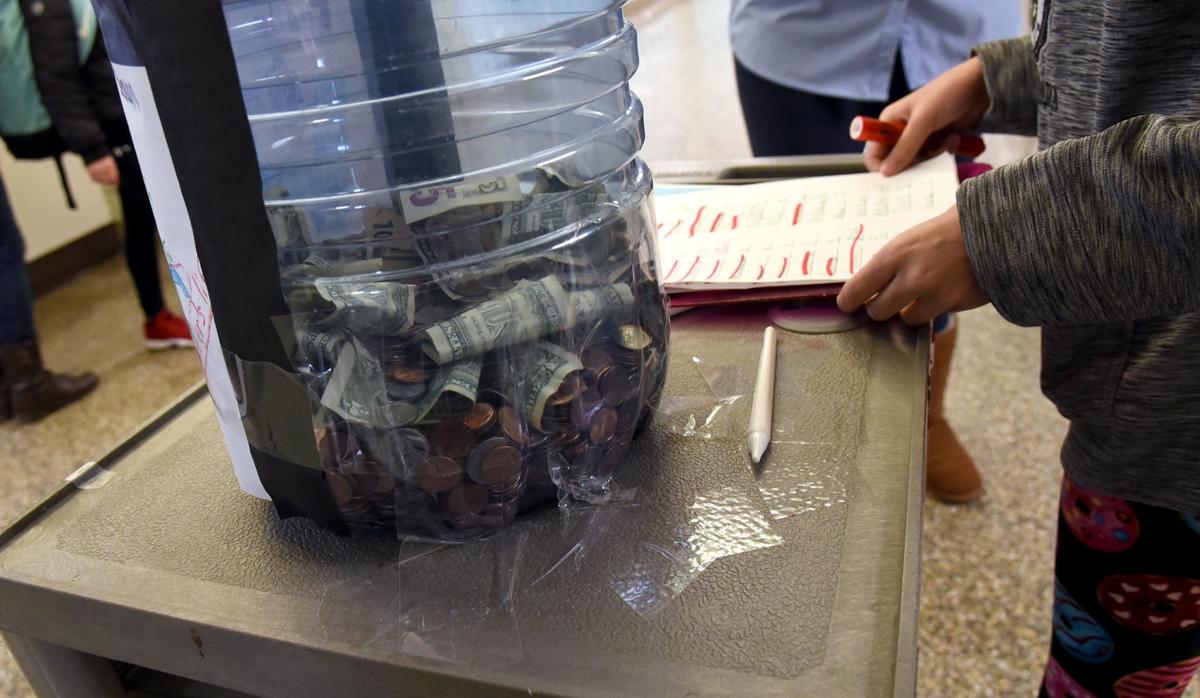 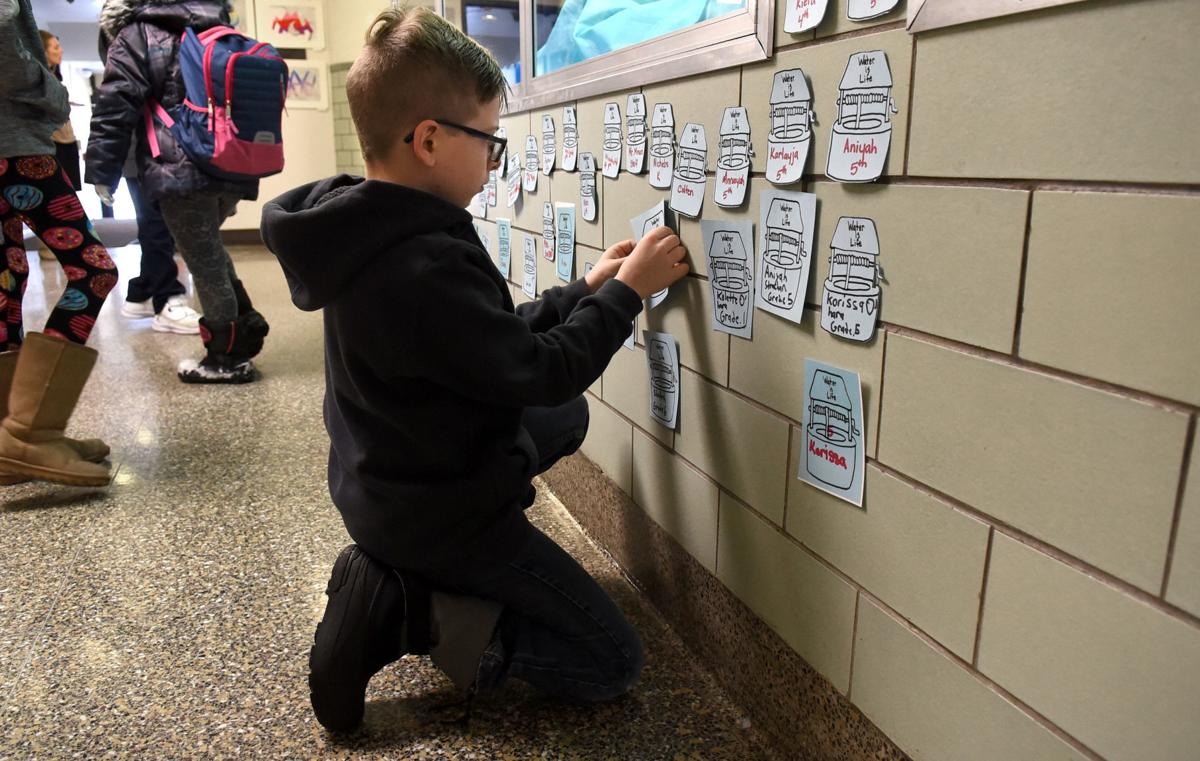 Genesee Elementary School Pride Leadership Team student Connor Winks tapes the names of donors to the wall during a collection to raise money for a well water system in Cameroon. 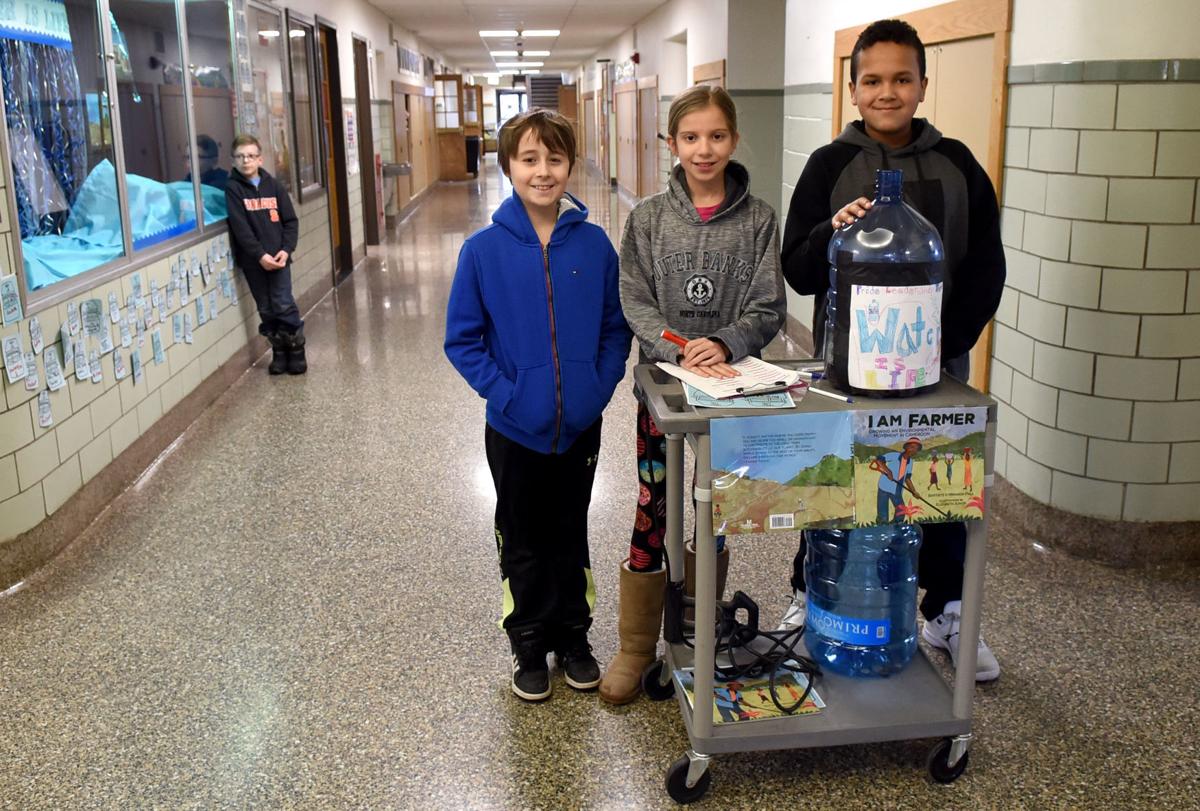 AUBURN — Laura Stebbins donated the money she recently received from the tooth fairy to help install a well water system in the African country of Cameroon.

Laura is one of several Genesee Elementary School students who donated funds Friday toward the project through a coin drive each Auburn elementary school and the Auburn Junior High School Honor Society are holding. Student Vincent Brobbey donated some change from Genesee principal Amanda Simmons, wishing for a new best friend as he put the coin into a water jug carrying change and dollar bills.

The students' efforts are assisting farmer Dieudonne Tantoh Nforba, who will visit the Auburn Enlarged City School District along with Miranda and Baptiste Paul, authors of a book about Nforba titled "I Am Farmer." The organization Nforba helped start, the Save Your Future Association, will install the well water system in accordance with his mission to make sure people have clean water.

The Pauls will come to Auburn the week of March 25 as a part of the district's annual efforts to have an author visit. An evening program with the Pauls and Nforba will also be held March 28.

Mlod, who is organizing the efforts, said she spoke with the Pauls last year during an event where authors did Skype sessions for free. The Pauls were so engaging with Mlod's students that she asked what it would take to bring them to Auburn, and they replied that they were working on "I Am Farmer" and would tour in support of it.

Mlod, Calarco and Rice also wanted to help install the well water system and blog about it to show pictures to the students, teach them digital citizenship and "make it more real" for them.

"It exposes them to other parts of the world and other perspectives that other people might have," Mlod said.

Anyone is invited to donate at least a penny for the project. Donations can be brought to the library of any Auburn public elementary school or of the junior high school. Checks should be made out to the Save Your Future Association and brought to Mlod at Genesee. She said it would be great to have students contribute to the well water system, which is set to cost $4,793.

Calarco noted that one student, Eli Coleman, brought in what is estimated to be over $100. Mlod said a person who prefers not to be named donated $1,000, with their business giving a matching amount. Any money not raised by the district will be covered by the association. The Auburn Junior High School Honor Society is also participating with a coin drive. Donations can be made up to Jan. 25, as Mlod, Calarco and Rice leave the next day. All three received $2,000 educational grants for professional development for things such as airfare and lodging from the Auburn Teachers Association and the Auburn school district.

Students in each of the elementary schools have also been learning about water filtration and the fact that people in other countries lack access to clean water, Mlod said. Students from Genesee's Pride Leadership Team — students from fourth grade through sixth grade who lead the school in service projects — said Friday that they were excited about their efforts.

"It feels really good that we can help other people get fresh water," student Johnny Smith said.

Calaroco said she is glad the students have been participating.

"One thing the next generation needs to definitely learn is empathy and that what we do over here affects people over there, and vice versa," she said. "We're a globally connected world."

What Americans like to eat on a first date

What Americans like to eat on a first date

Ways to save money on pet care

Ways to save money on pet care

These are the most popular condiments around the world

These are the most popular condiments around the world

For Salt of the Earth, a new restaurant in Union Springs, COVID-19 wasn't just salt in the wound. It was the wound.

'Every little detail': Inside The Spa at the Inns of Aurora, opening soon

LEDYARD — The word "intentionality" comes up a lot in conversation about The Spa at the Inns of Aurora.

Sensory hour to be held weekly at Five Below in Auburn

Five Below will hold a weekly sensory hour from 10 to 11 a.m. Sundays beginning June 27 at the store in Auburn Plaza at 217 Grant Ave.

Genesee Elementary School Pride Leadership Team student Connor Winks tapes the names of donors to the wall during a collection to raise money for a well water system in Cameroon.