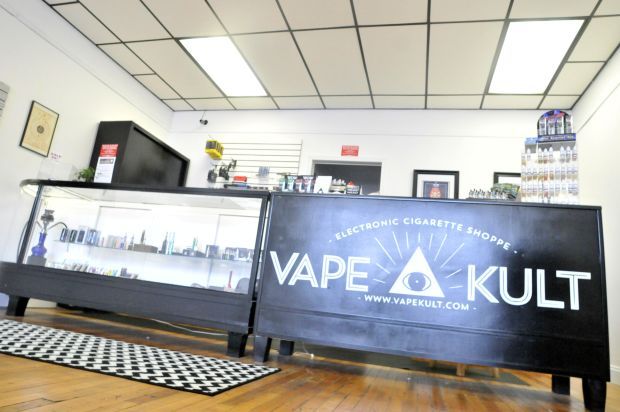 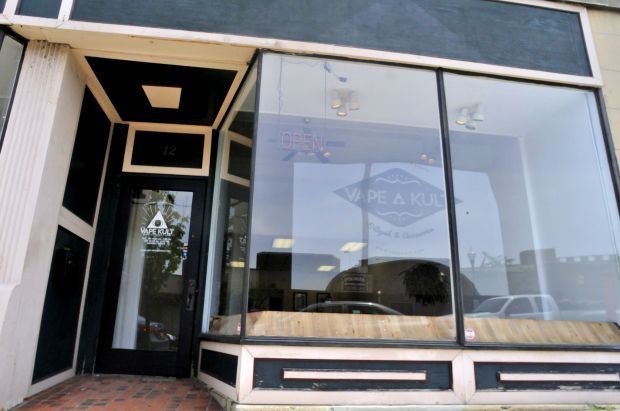 AUBURN | Electronic cigarettes are more than just a product.

According to Richard DeChick, the battery-powered vaporizers are part of a whole culture in the West Coast that's growing and spreading, albeit slowly, to the East.

That culture inspired DeChick to open Vape Kult — a new business in downtown Auburn that sells e-cigarettes, e-liquid and other related accessories.

DeChick decided he wanted open an e-cigarette store in April. After that, it didn't take long for things to fall into place.

A spot opened up in the Masonic Temple building on South Street the same day his friend finished designing Vape Kult's logo: An open eye gazing out of a black pyramid emitting sun-like rays.

"I wanted a name that gave you an idea of what it was, but was hipster," he said. "There's a whole culture to this that people don't even know."

When creating Vape Kult's atmosphere, DeChick filled the white-walled, wooden-floored space with black-and-white zig-zagged rugs — adding splashes of color with a few red and black chairs. Paying homage to the building, he hung Masonic-themed art on the walls.

Then on June 8, with his displays set up, DeChick opened Vape Kult for business.

With the closest e-cigarette shop located in Camillus, DeChick wanted to fill the void.

"There's not one here, and it should be accessible to people," he said. "It's a growing multitude, and as controversial as it is, it's likely not to disappear."

Over the past few years, debate has swirled around electronic cigarettes as the Food and Drug Administration weighs whether or not it wants to regulate the product.

As the controversy continues, DeChick said he does fear that e-cigarettes could be banned.

"It makes me nervous," he said. "It's definitely scary, because the FDA's going to rule on the whole thing."

When asked about the controversy, DeChick gave his analysis: Inhaling anything into your lungs isn't a healthy choice. But unlike traditional cigarettes, e-cigarettes emit water vapor, not smoke, and don't cloak users in a smoky, tobacco smell.

Another difference, DeChick said, is e-cigarettes allow users to regulate how much nicotine they inhale — allowing people who hope to quit to gradually decrease how much of the addictive chemical they use over time.

So far, people can use e-cigarettes inside in most of upstate New York.

In the three weeks since Vape Kult has been in business both physically and online, DeChick said he has enjoyed a positive response from the community.

"Everybody that's walked in the door has been happy that there's a finally a shop here," he said.

And if you stop by his store, DeChick will be happy to show you what Vape Kult has to offer.

"We have everything you need, and you can come in and hang out," he said. "Just come in."

OWASCO — The reason Connie Ryan organized the hamlet of Owasco's first Craft Fair and Chili Cook-off laid in the yard behind the fair itself: …