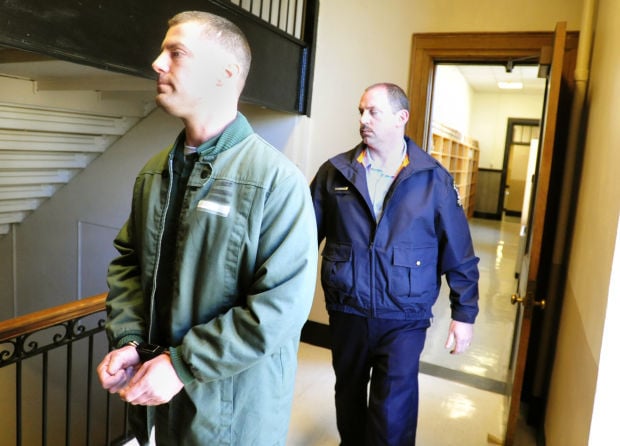 David McNamara, left, is escorted into Cayuga County Court Tuesday to be sentenced for the June 2011 murder of ex-girlfriend Katie Socci. 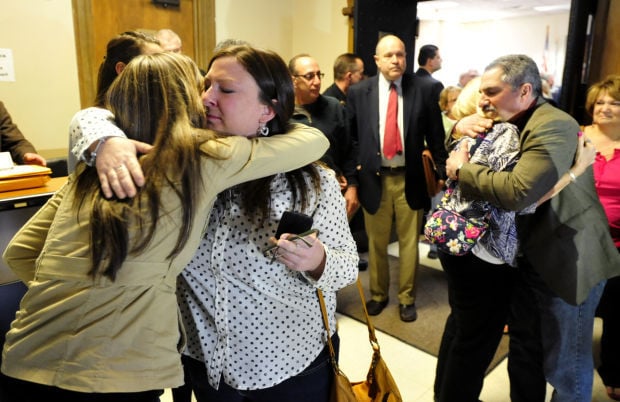 The Auburn man plotted out how to murder the mother of his child days before he strangled her to death, taking multiple precautions in an attempt to cover his tracks.

In preparation, McNamara lined the trunk of his car with plastic. He stole a pair of boots and a shovel. He sent texts to Katie's brother-in-law in an attempt to lure the man out of her home, ensuring no one would interfere with his murderous scheme.

District Attorney Jon Budelmann described McNamara's calculated actions to the crowd packed inside Cayuga County Court during the defendant's sentencing Tuesday morning to show the court the magnitude of a crime committed by "a real-life monster."

"I want to stress that this was a premeditated murder," Budelmann said. "It was not a crime of passion, but was rather of dispassion."

Before the court could move forward, the defendant made a motion.

McNamara petitioned to withdraw his guilty plea, claiming he was coerced. He argued Douglas Bates, his defense attorney, hadn't spent enough time with him, and said he didn't get a chance to review most of the evidence.

Judge Mark Fandrich denied the defendant's motion, reminding McNamara that he was repeatedly asked during his February appearance if he was voluntarily pleading guilty.

With the defendant's last-minute attempt to escape punishment behind them, Katie's parents addressed McNamara — something Tina Socci said she had wanted to do since Katie was reported missing on June 14, 2011.

Tina faced the man who killed her daughter, sucking in ragged breaths.

When Katie first disappeared, Tina said she felt sorry for McNamara. But now, Tina said she is convinced neither she nor Katie ever knew the "true Dave."

"He said he loved her," she said. "But how could he kill the mother of his child?"

Tina then turned to the stony-faced defendant, asking him to remember how articulate his daughter was at 18 months. She said she realized he killed Katie in front of Sydney when the toddler said, "Momma fall down" the day after her mother's death.

Speaking as if out of breath, Tina told McNamara that his 3-year-old dreams about and speaks to"Momma Katie."

"She doesn't even know you exist, Dave," Tina said.

After giving his wife a kiss on the cheek, John Socci asked the court to imagine how Katie felt as she fought to live.

"I am haunted by what she must have endured," he said, his voice shaking.

As more than half the courtroom wept openly, John said Katie, a nurse, was everything a parent could ask for. He said her absence left "a hole in our hearts, an emptiness."

The defendant watched silently as the Soccis spoke, his face betraying no reaction to their anger or pain. But when the DA detailed the defendant's motive for murder, McNamara couldn't keep still.

Budelmann said McNamara decided to kill Katie after discovering she became intimate with another man. Although the pair had been broken up for a year, the defendant couldn't stand watching her move on.

"He was fixated, and jealously consumed him," Budelmann said. "That was the defendant's motive, his true reason for killing her."

The DA said McNamara broke into the Auburn woman's Swift Street home on June 13 and hid "like a coward." While he waited, McNamara smoked away his anxiety, tossing his used cigarette butts on Katie's basement floor.

Budelmann said the defendant attacked Katie from behind, putting one hand around her throat and another over her nose and mouth.

Katie fought hard, scratching McNamara's chest as she struggled to free herself from his determined grasp. Budelmann said the defendant stared into Katie's eyes during the three minutes it took to end her life, watching as the light in her eyes dimmed.

Leaving his toddler daughter alone, McNamara drove to the pre-dug grave. He later told a fellow inmate that he laughed at the sound Katie's body made as it landed in the muddy hole and said, "Last drink is on me, b****."

McNamara's necked burned red when the DA argued no one would pine for him.

"Unlike this defendant," Budelmann said, "She will be truly missed."

Bates asked the judge to stick to the plea agreement. He called the 2011 tragedy "inexplicable."

"No punishment is going to save the grief of John and Tina Socci," he said. "I don't expect that anyone is going to leave this courtroom consoled."

When given a chance to speak, McNamara argued that "romantic jealousy" had nothing to do with Katie's death. He denied planning her death and — without giving specifics — told the court he witnessed something that made him snap.

Calling himself a loving parent, McNamara said he plead guilty to "do the right thing."

"I love my daughter," he said. "I would do anything to protect her."

Fandrich dismissed the defendant's claims, stating that Katie's death was a reminder of what can happen when a victim tries to break away from a jealous abuser.

"You deprived your daughter of her mother," he said. "You've caused immeasurable harm and grief."

Fandrich sentenced McNamara to serve 20 years to life in prison. The term must run consecutively to the four-year-long bid the defendant is currently serving for an unrelated drug conviction.

Budelmann said McNamara will eligible for parole in two decades.

Dozens of Katie's teary-eyed loved ones filed out of the courthouse and into the sunlight. They exchanged hugs, smiling as they relished justice for the young, ever-smiling mother.

No one spared a glance for McNamara as officers herded him into a van, ferrying him out of sight.

Crime, courts and compassion: The best of Samantha House

Samantha House, The Citizen's crime and courts reporter, is leaving after nearly four years with the newspaper. As a tribute to her, here are …

Katie Socci's story: 'She truly did love him'

The night his daughter was murdered, John Socci couldn't sleep.

David McNamara, left, is escorted into Cayuga County Court Tuesday to be sentenced for the June 2011 murder of ex-girlfriend Katie Socci.