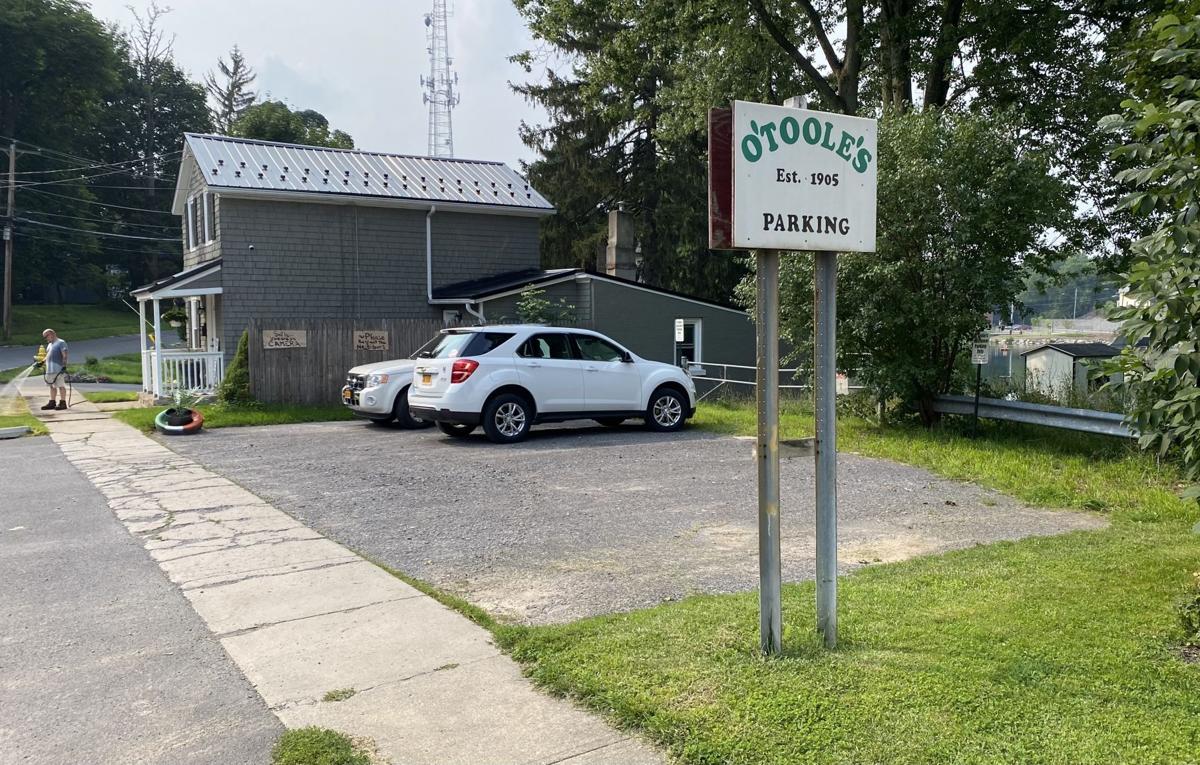 The parking lot across from O'Toole's Tavern at 108 Osborne St. in Auburn. 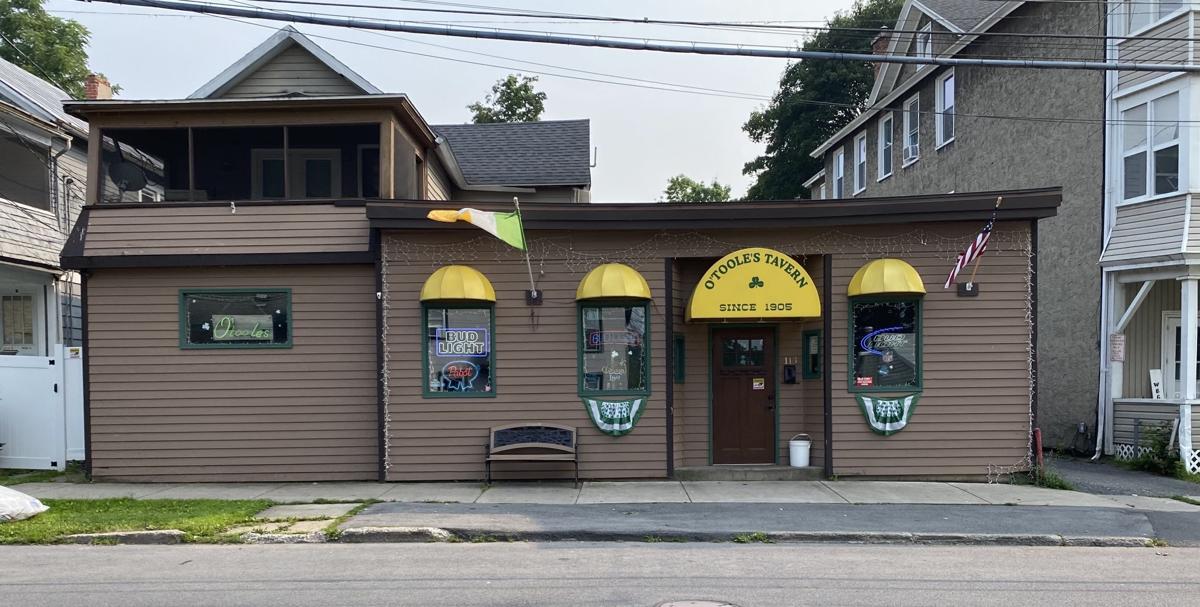 AUBURN — An old conflict between an Osborne Street bar and its neighbors was brought before the city's new board for addressing nuisance properties last week.

James Udall, owner of a home at 106 Osborne, called for action to be taken against O'Toole's Tavern, at 113 Osborne, during the board's meeting July 21 at Memorial City Hall. Udall said patrons of the bar regularly drive on his lawn, urinate on his flowers and fence, litter his property with beer bottles and condom wrappers, and wake him and his wife up with arguments and fights.

Udall also voiced his concern that those patrons, who are often visibly intoxicated, are not prevented by the bar from driving home.

But there was more to Udall's complaint to the city than drunken criminality. Many patrons of O'Toole's park next to his home, in a small gravel lot at 108 Osborne. As Udall was surprised to learn, however, the lot is not owned by the bar. It's owned by the city of Auburn itself. Since June 1995 the city has leased the lot to the bar at a rate of $200 a year, or $16.67 a month.

"I don't understand that," Udall told the board Wednesday. "What does the public get for that $16.67 a month? Multiple 911 calls? I know because I've made several."

A city database shows there have been 21 calls to police regarding O'Toole's since June 2020. Common reasons include noise, intoxication, unwanted guests and suspicious incidents.

"That parking lot is a source of mayhem," Udall said. "Of which my property suffers continuously."

In response to Udall's complaint, Auburn City Manager Jeff Dygert said that despite owning the parking lot property, it wouldn't make sense for the city to punish itself. But, he continued, the complaint has led the city to take a closer look at O'Toole's. Assistant Corporation Counsel Nathan Garland suggested forwarding Udall's complaint to the New York State Liquor Authority. Not maintaining an orderly parking lot could be cause for revoking the bar's liquor license, Garland explained, and in that respect the authority is better positioned to take action than the city.

Udall told The Citizen after the meeting that he believes the Liquor Authority could get the attention of O'Toole's, leading to at least some of the change he wants to see from the bar.

Udall and his wife, Tonya, moved to 106 Osborne St. in December.

It wasn't long afterward that Udall met Jack Voorhees, the owner of O'Toole's. Open since 1905, the bar is part of an area of Auburn where residences and businesses neighbor each other almost at random, the way they did before urban renewal and downtown revitalization. Aside from its yellow awnings and neon beer signs in its windows, the bar doesn't announce itself too loudly.

But its patrons do. The first time they did so to Udall, he brought his complaint through the door of O'Toole's, directly to its owner's ears.

Voorhees wasn't interested in listening, Udall said. As soon as he started talking, the owner picked up his beer, turned his back and walked away.

"He said, 'You bought a house across the street from a bar. What did you expect?'" Udall recalled.

Reached by phone Friday at his bar, Voorhees declined comment on this story to The Citizen.

Udall, a former real estate broker, admits he "broke every rule I know" when he and Tonya bought their Auburn home. They came to the city from Germany, where Tonya was teaching until she lost her position, and with it their visas, due to the COVID-19 pandemic. Meanwhile, their daughter in Syracuse was expecting the Udalls' first grandchild. So the new grandparents decided to move nearby.

It was also due to the pandemic that the Udalls weren't able to visit Osborne Street in person before buying their home there. But, wanting to move in as soon as possible, they bought it anyway.

"If I saw (O'Toole's) and got a feel for it, we probably wouldn't have bought the house," Udall said.

Nevertheless, Udall feels there's no excuse for the "frat house" behavior of Voorhees and his patrons. Among the many acts of property destruction and obscenity Udall has witnessed and recorded on his doorbell camera, one incident made his family afraid for their lives. It was the end of May, and his son-in-law was visiting with his 4-month-old daughter. As they left the home, a patron exited his car and asked the son-in-law, "Do you want to see a homicide?" Udall called 911, but by the time police arrived the patron had left. Based on his behavior, Udall believes he was drunk.

His daughter and son-in-law have been hesitant to bring their infant back to her grandparents' home ever since, he said.

AUBURN — A special board meant to address properties that have been deemed nuisances in Auburn is set to meet for the first time this month.

Other residents of Osborne Street have endured similar problems with O'Toole's and its patrons.

Dan Morris, who has lived at 105 Osborne for almost nine years, told The Citizen that patrons frequently trespass on his property and leave beer bottles and other litter there. On more than one morning he's also found his car damaged by what he presumes are intoxicated drivers. Morris lives next to another parking lot, owned by McLoughlin Glass Co., that O'Toole's patrons commonly use.

"The people who go there to drink have no respect for the people who live on that street," he said. "I'm not trying to take away anyone's livelihood, but you have to respect the people."

Morris feels that lack of respect is a result of what he called an "untouchable mentality" at O'Toole's. Because of the bar's 116 years of history and the fact that Voorhees owns several additional properties along Osborne Street, he and his patrons behave as though he owns the entire neighborhood, including the parking lots next to the homes of Udall and Morris, they said.

"It really comes across like this is Jack's street," Udall said. "And he acts like it's his street."

If only Voorhees took more responsibility for "his street," Udall said, he might be satisfied. He hopes his complaint to the city leads to an "honest sit-down" with the owner about solving the problems created by O'Toole's and its patrons. For instance, Udall would like to see the bar send employees to monitor the parking lots every 30 minutes after 10 p.m. He would like the bartenders to be more proactive about not overserving patrons and preventing them from driving home if they're too drunk. And at the very least, Udall would like a trash can placed in the parking lot next to his home.

Without intervention from the city, the Liquor Authority or otherwise, Udall isn't confident that will happen. A previous attempt to place a trash can in the parking lot went nowhere with Voorhees.

But Udall isn't deterred. On the contrary, he's determined to clean up the neighborhood himself — starting with that parking lot.

According to its 1995 lease agreement with Voorhees, the city of Auburn maintains ownership of the property at 108 Osborne St. because a sewer main is located on the lot.

Udall said he learned that because he has tried, unsuccessfully, to buy the property. He also tried to buy it with a deed restriction that would allow the city access to the main, but he was again denied.

Assistant Corporation Counsel Garland told The Citizen the city requires not just that access, but "a certain degree of control over" the property due to its responsibility for municipal utilities.

Udall said he has contacted Garland about leasing the property, but was told the city isn't considering proposals because of the pending $4.4 million project to reconstruct Osborne Street between Lake Avenue and Loop Road. Asked by The Citizen to confirm that, Garland said he can't comment because no formal proposals to buy or lease the property have been submitted to the city.

Likewise, when asked why the city continues leasing the property to Voorhees for $16.67 a month, Garland said that in the absence of any formal proposals, the city has had no reason to reconsider.

On Monday, however, Udall emailed a proposal to the city that he and his wife lease part of the property, which spans Osborne Street to the Owasco River. Voorhees would retain use of the 1,100-square-foot parking lot, but the Udalls would receive exclusive use of the 4,400 square feet behind the lot. When Voorhees' lease ends, the Udalls would have the first right of refusal to the lot.

The O'Toole's owner has long neglected the property's appearance, Udall said, so he's been taking care of the 800 square feet closest to his home since he moved in. But if the city agrees to the proposal, he and Tonya want to do more than make the rest of the riverfront property attractive. The Udalls, and some of their neighbors, want to plant a community garden there.

The property could fit up to 40 plots, Udall said. They would be leased to neighbors at a rate calculated to cover the costs of maintenance and insurance. Once the garden is operating, the proposal says, the Udalls would pay the city $100 a month. If the O'Toole's parking lot becomes available to them as well, that rate would double to $200, or about 12 times what Voorhees pays.

But the proposal isn't about money, Udall said. It's about taking back the Osborne Street neighborhood.

"This street, in my opinion, is really run down," he said. "This is the kind of thing that Osborne Street needs."

The parking lot across from O'Toole's Tavern at 108 Osborne St. in Auburn.