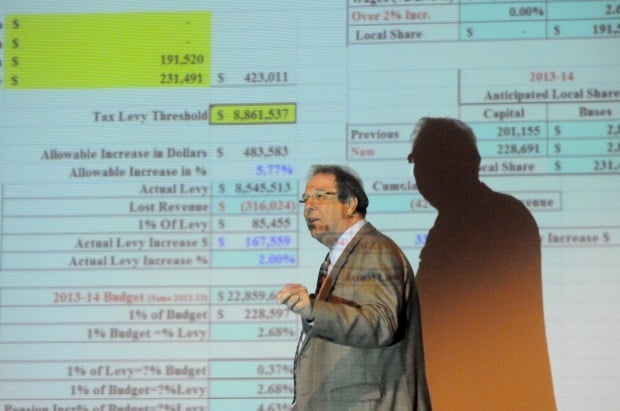 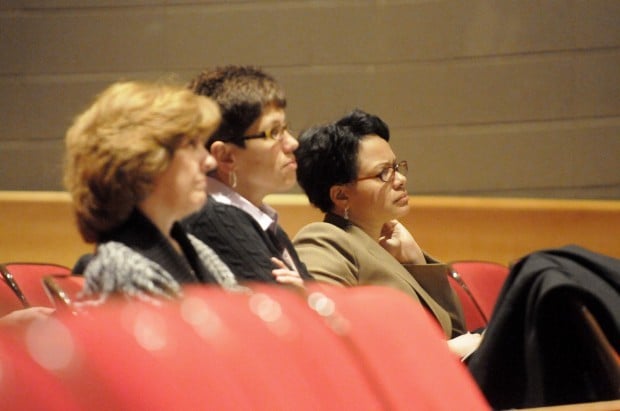 Lisa Green, left, business administrator for the Auburn Enlarged City School District, Leela George, assistant superintendent for curriculum and instruction for the AECSD, and Constant Evelyn, superintendent of the AECSD, right, listen to a presentation regarding the regional impact of state aid on the Cayuga-Onondaga BOCES. 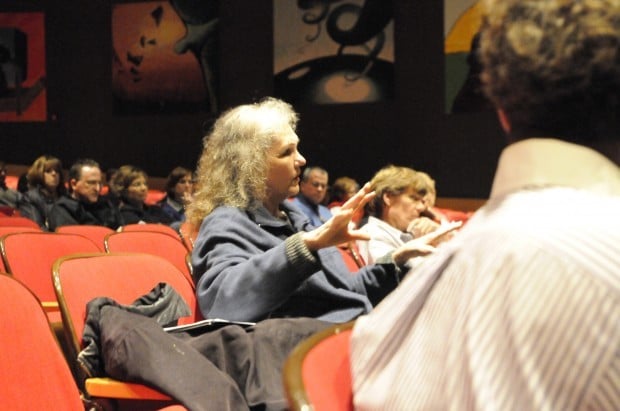 Grappling with a shaky economy and a less-than-adequate state aid, schools have been forced to repeatedly lay off teachers and staff members and cut non-mandated programs — like art, music, sports, prekindergarten and kindergarten — in an attempt to make ends meet.

And although jobs reports and consumer confidence surveys point to an improving economy, New York school districts are having a tougher time surviving now than they were during the beginning of the recession.

Rick Timbs, executive director of the Statewide School Finance Consortium, gave a presentation on how reduced state aid has effected districts located within the Cayuga-Onondaga BOCES on Saturday morning to an audience of educators, administrators and residents settled inside Auburn High School's auditorium.

"It's getting less money to run a system that costs more," he said. "This is not sustainable."

From the 2010 to 2011 and 2012 to 2013 budgets, Timbs said the nine school districts located within the Cayuga-Onondaga BOCES — Auburn, Cato-Meridian, Jordan-Elbridge, Moravia, Port Byron, Skaneateles, Southern Cayuga, Union Springs and Weedsport — lost $71,226,265 in aid.

Skaneateles, the wealthiest district in the region's BOCES with the lowest percentage of children applying for free lunches, lost $3,814,748, the smallest portion of aid out of all the school districts. Auburn, a district where nearly half the students apply for free lunches, lost the largest amount of aid, totaling $23,409,444 in revenue lost.

"You can't run a school district under these conditions," Timbs said. "The entire state aid formula is fraught with these problems."

To fix the aid gaps, Timbs encouraged administrators, parents and teachers to get informed and involved in the budgeting process, encouraging Cayuga-Onondaga BOCES school districts to create budgets for three years into the future instead of one.

He implored concerned parents and grandparents to write to their state legislators and demand a new state aid formula.

She said the mix of state mandates, the tax cap law and the broken state aid formula were forcing administrators to get rid of programs — such as kindergarten — against their better judgement.

"New York superintendents are facing a 2 percent budget cap and are truly being set up, so to speak, to do things that go against their personal purpose," Evelyn said. "The state has to step up. The state has to revamp its programs so that they're equitable."

But Evelyn, like Timbs, did not see the situation as irreversible. Through unity, the superintendent said change was possible.

"People need to understand that we're all in this together," she said. "Together, we're strong."

'Large sum' of cash found in Auburn returned to its owner

The "large sum" of cash found by the owner of an Auburn restaurant turned out to be $2,000, and it's now back in the hands of the person who lost it.

Lisa Green, left, business administrator for the Auburn Enlarged City School District, Leela George, assistant superintendent for curriculum and instruction for the AECSD, and Constant Evelyn, superintendent of the AECSD, right, listen to a presentation regarding the regional impact of state aid on the Cayuga-Onondaga BOCES.