A husband and wife who worked as pharmacists at local Kinney Drugs stores are suing the company for firing them after they refused to administer the COVID-19 vaccine to younger age groups.

The pharmacists, Joel and Katie Wood, of the Tioga County town of Berkshire, worked at Kinney locations in Ithaca and the Cayuga County village of Moravia, respectively. According to a complaint filed Monday in state Supreme Court in Tompkins County, the Woods were fired last spring after raising several concerns about the vaccine, and its appropriateness for children, to their supervisors.

Joel Wood told The Citizen that he and his wife brought their concerns to Kinney in May, after the Pfizer vaccine was authorized for ages 12 to 15 by the Food and Drug Administration.

The Woods were concerned that the vaccine was only authorized, he said, not approved. (The FDA has since approved the Pfizer vaccine for ages 16 and older.) The pharmacists were also concerned about the lack of long-term data and other information in the paperwork for the vaccine, as well as "vaccine shedding," a theory that vaccinated people can discharge the virus. (The theory has been debunked by the Centers for Disease Control and Prevention.) For those reasons, the Woods told Kinney they were not comfortable administering the vaccine to younger age groups — 50 and younger for Joel Wood, and children for Katie Wood. Because it was May and demand for the vaccine was declining, he said, they believed the company could have accommodated them.

"There were other jobs we could do that wouldn't involve administering shots. They're running a business, we understand that. But if they really wanted to they could have worked with us to figure something out," said Joel Wood, who spent his career with Kinney and called it a "great company to work for." He and his wife, who have two children, have not received the vaccine, he added.

When the Woods shared their concerns with a supervisor, however, he responded that the company "cannot go down the path of pharmacists not providing essential services," the complaint says.

"(Kinney) specifically instructed Mr. Wood and Ms. Wood not to provide any of the foregoing information to vaccine recipients and instead to actively mislead such persons so they would believe the vaccine and vaccination process lacked significant risks," the complaint says. "Plaintiffs were also told that they must continue to administer the vaccine (and) that they would be fired if they did not."

A representative of Kinney declined to answer The Citizen's questions about the Woods and their firing, citing company policy not to comment on personnel matters, but sent a brief statement.

"As a 118-year-old, 100% employee-owned pharmacy, Kinney Drugs considers that the safety of our patients and employees to be our highest priority. As always, our company continues to work very closely with state and federal health agencies to ensure that we are following the latest guidance for all vaccines that we administer," the representative said.

The Woods, who seek reinstatement to their jobs at Kinney and damages in an amount to be determined by a jury, are being represented by attorney Sheldon Karasik, of Nassau County. In July, he delivered a widely shared online presentation about obtaining religious exemptions related to COVID-19. Though he believes the Woods have a case for religious discrimination, he believes they have a stronger case as whistleblowers. Under New York state law, employees cannot be punished in retaliation for raising concerns to supervisors about perceived dangers to public health.

"These are two standup, honorable people who expressed on numerous occasions their concerns over this vaccine," Karasik told The Citizen. "They expressed these concerns to (Kinney), OSHA, etc. Talk about doing everything that's right — they damn well did. And what did they get for all that? Termination. If this isn't a whistleblower claim in the health care industry, I don't know what is." 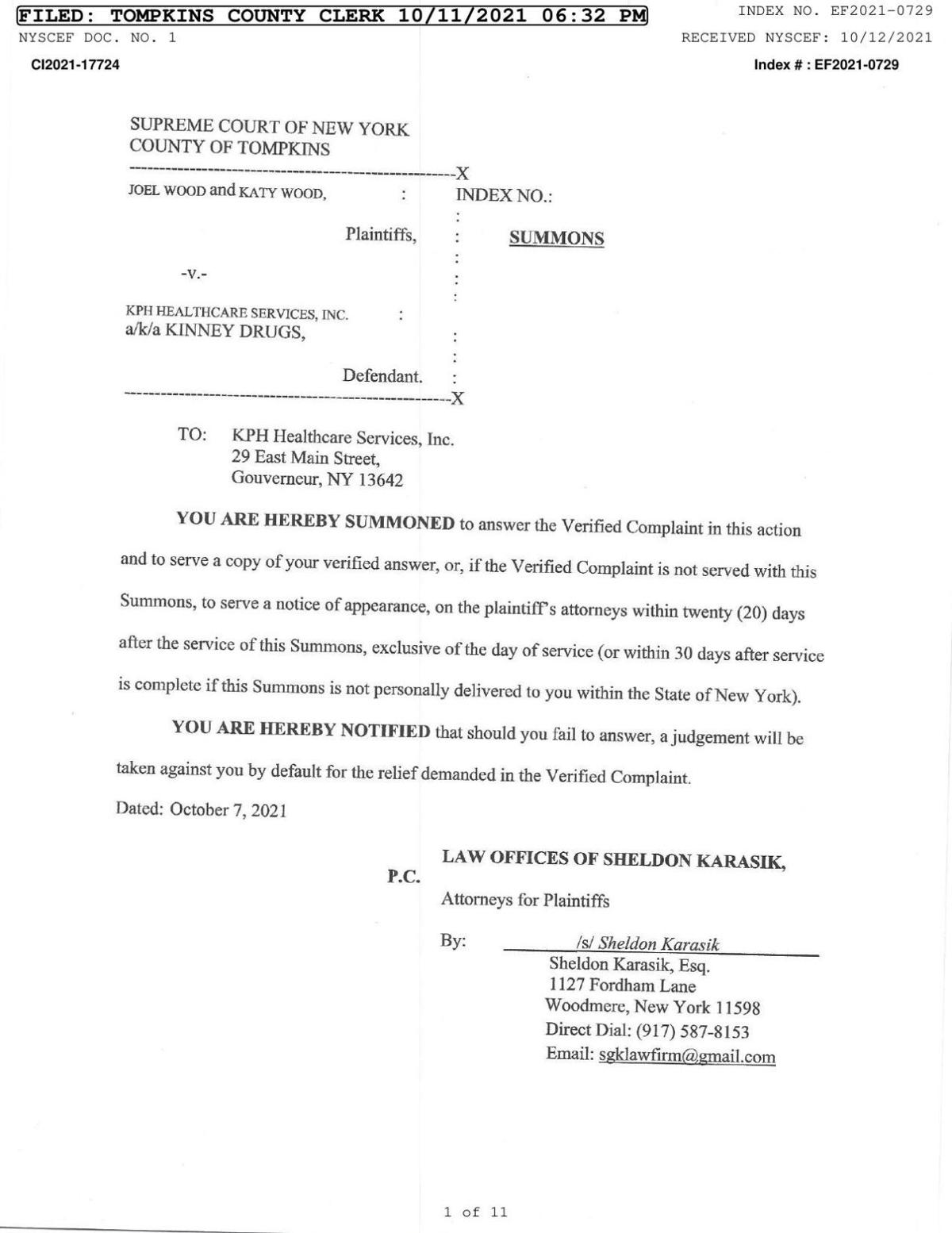