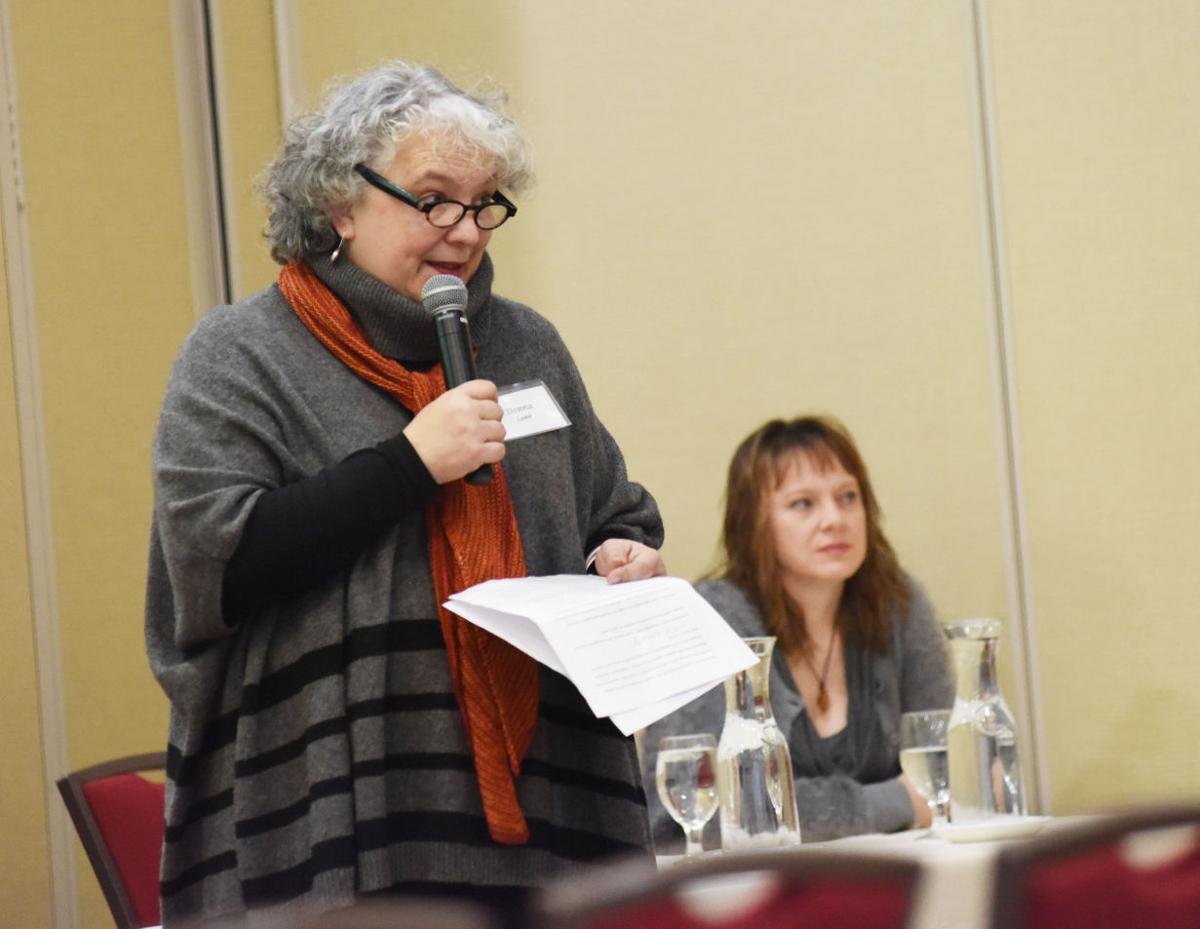 Donna Lamb, executive director of the Schweinfurth Art Center, talks about Auburn Arts at the Wednesday Morning Roundtable in Auburn. 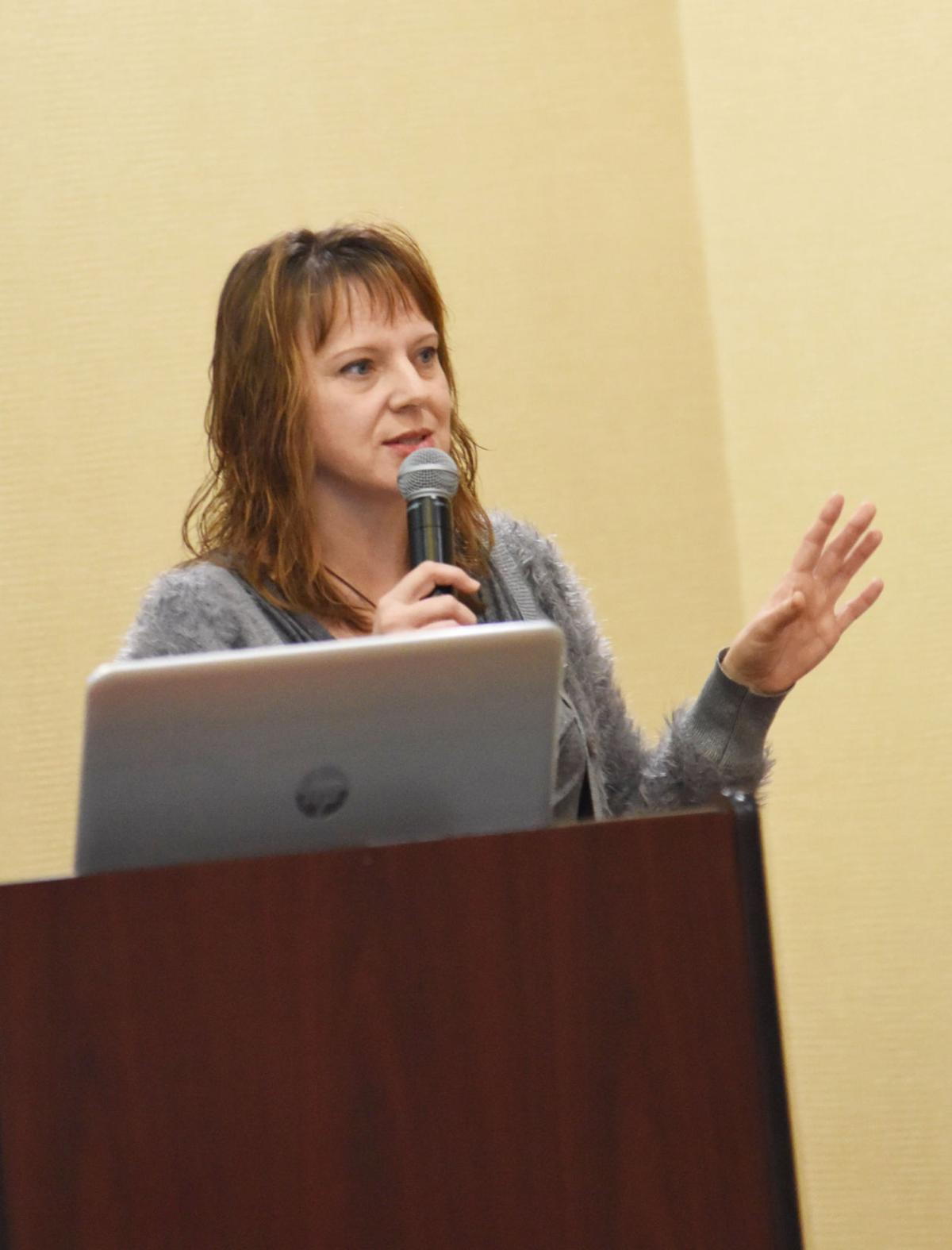 Monika Salvage talks about the Auburn Public Art Trail at the Wednesday Morning Roundtable at the Hilton Garden Inn in Auburn.

Donna Lamb, executive director of the Schweinfurth Art Center, began the morning at the Hilton Garden Inn by describing the efforts of Auburn Arts.

A marketing partnership between the Schweinfurth, Auburn Public Theater, the Finger Lakes Musical Theatre Festival, the Cayuga Museum of History & Art, the Seward House Museum and Willard Memorial Chapel, Auburn Arts promotes the six entities and their events through a "clean and simple" website, Lamb said.

"It also would serve to help brand Auburn as an arts destination, as well as a history destination," she said. "One of the great things about Auburn is that we have both."

Lamb explained that partnering with CNY Arts has allowed Auburn Arts members to list their events there — for a much wider readership — and also feed the listings to Auburn Arts automatically. The effort's next priorities are self-promotion and registering additional members, which can also be done through CNY Arts.

Auburn Arts ties into a vision Lamb conceived years ago with City Councilor Dia Carabajal and Auburn Public Theater Artistic Director Angela Daddabbo to establish a walkable arts district in Auburn, one defined by signage and mapping. Lamb said the development of housing and restaurants downtown, new festivals there and the creation of the Auburn Public Art Trail have made that vision more achievable today.

"It's amazing to me how many more pieces we have in place than we did just a few years ago," she said. "I think it's time we revisit that idea."

Lamb concluded by talking about a CNY Arts project that could provide funding for the marketing and signage needed to realize an arts district in downtown Auburn.

"Auburn is potentially one of the first communities they would consider working with because we're so far along in our arts planning," she said.

Monika Salvage continued the roundtable by talking about the Auburn Public Art Trail, which she founded last year. The trail chains together 13 pieces of public art downtown, including Art for Auburn's mural projects, Audrey Iwanicki's "Wheels to Reels" sculpture on Exchange Street and the mural featuring Meyer Bookbinding owner Jim Meyer on the Market Street shop's old location. A paper and downloadable brochure, with a map and more information about the pieces, curates the walking trip.

"The idea is to create something where people can actually walk around downtown. Get out of their cars and actually visit up close not just the restaurants and the bars and the shops along the way, but also the public art that's right in front of them but they might not always notice it," Salvage said.

Salvage outlined the what, why and how of the trail, including ways to fund the preservation of its outdoor art and new additions that could be made. Falcon Park, the empty lot at 1-7 State St. and the future public safety complex could be the site of not necessarily sweeping murals, but even just a uniquely designed bench or bike rack, Salvage said.

However, Salvage stressed, the community requires the financial and organizational infrastructure to support not only the art, but the artists making it.

"We as a community have to ask ourselves if we're ready to use art to transform public spaces," she said. "We have to find the answers that are right for Auburn."

The January 2016 Wednesday Morning Roundtable offers up discussion about the arts in Auburn, NY.

Donna Lamb, executive director of the Schweinfurth Art Center, talks about Auburn Arts at the Wednesday Morning Roundtable in Auburn.

Monika Salvage talks about the Auburn Public Art Trail at the Wednesday Morning Roundtable at the Hilton Garden Inn in Auburn.